Action Forex
HomeAction InsightMarket OverviewEuro Weighed Down by Italy, CAD Lower on Data, Dollar Back in...

Euro Weighed Down by Italy, CAD Lower on Data, Dollar Back in Spotlight

Dollar takes back the driving street in early US session as it jumps higher against all other major currencies. Swiss Franc is probably the only one that can counter Dollar’s strength, as helped by the selloff in EUR/CHF. Euro is weighed down by news that the populist parties of 5-Star movement and the League has finally signed the accord to form coalition government. Though, Canadian Dollar is even weaker after disappointing retail sales and CPI data.

Technically, EUR/USD’s break of 1.1762 suggests that it’s ready to resume recent fall. EUR/CHF also takes out 1.1770 support too. But for now, Dollar is still holding in range against Sterling, Swiss Franc, Aussie and even Canadian.

Canadian Dollar trades notably lower after weaker than expected data. Headline retail sales rose 0.6% mom in March, above expectation of 0.4% mom. However, ex-auto sales was a big miss, contracted -0.2% mom versus consensus of 0.5% mom growth. Headline CPI slowed to 2.2% yoy in April, down from 2.3% yoy, and missed expectation of 2.3% yoy. CPI core common was unchanged at 1.9% yoy. CPI core median was unchanged at 2.1%. CPI core trim rose to 2.1% yoy.

European Commission formally announced the measures to protect interests of EU companies investing in Iran as part of the EU’s continued commitment to the Joint Comprehensive Plan of Action (JCPoA), the Iran nuclear deal. The EU acted on four fronts. The proposals got unanimous backing of EU Heads of State of Government at the Sofia meeting.

Firstly, it launched the formal process to activate the “Blocking Statute”, by updating the list of US sanctions on Iran falling within its scope. It “forbids EU companies from complying with the extraterritorial effects of US sanctions, allows companies to recover damages arising from such sanctions from the person causing them, and nullifies the effect in the EU of any foreign court judgements based on them.”. It’s targeted to be in force before August 6, 2018.

Secondly, it launched the formal process to remove obstacles for the European Investment Bank (EIB) to decide under the EU budget guarantee to finance activities outside the European Union, in Iran.

Thirdly, as confidence building measures, the Commission will continue and strengthen the ongoing sectoral cooperation with, and assistance to, Iran.

Fourthly, EC is encouraging Member States to explore the possibility of one-off bank transfers to the Central Bank of Iran.

Full release here and details of the “Blocking Statute” here.

Italy’s “Contract for the Government of Change”

The populist parties of the League and the 5-Star Movement signed an accord to form a ruling coalition. The agreement is called “Contratto Per Il Governo Del Cambiamento” or “Contract for the Government of Change”. Five Star leader Luigi Di Maio said on Facebook that “it has been 70 very intense days, so many things have happened, but in the end we managed to achieve what we announced in the campaign.”

The 58-page document contains no mention of exit from the Eurozone. But it called for a review of EU governance and fiscal rules. Regarding fiscal policies, it said “the government’s actions will target a programme of public debt reduction not through revenue based on taxes and austerity, policies that have not achieved their goal, but rather through increased GDP by the revival of internal demand.”

That indicates there could be less revenue and more debt for the government in the near term. Italian 10 year yield jumps to high as 2.22 today, hitting the highest level since last July.

The joint program will be put to vote by 5-Star and League members. After approval, it will be presented to Italian President Sergio Mattarella.

China denied offer to cut USD 200B in surplus with US

China denied the news that it’s offering to cut trade surplus with US by USD 200B. Chinese foreign ministry spokesman Lu Kang said in a regular news briefing “this rumor is not true. This I can confirm to you”.

He added, “as I understand, the relevant consultations are ongoing and they are constructive,” regarding the trade talks between the US and Chinese delegates led by Vice Premier Liu He.

Separately, the Chinese Ministry of Commerce announced to end the “anti-dumping and anti-subsidy investigations of imported sorghum originating in the United States”.

The MOFCOM noted in the statement that “the imposition of anti-dumping and anti-subsidy measures on imports of sorghum originating from the United States would have a widespread impact on consumer living costs, and does not accord with the public interest.”

Recently, BoJ just dropped the time frame for meeting the 2% inflation target. And it maintained the stance to continue with ultra loose monetary easing. While recent surge in oil price could help lift overall and ex-food CPI ahead, the core-core CPI remained worryingly weak.

Breach of 1.1762 temporary low suggests that recent decline is resuming. Intraday bias is EUR/USD is back on the downside. Current fall from 1.2555 is resuming for 1.1708 medium term fibonacci level next. Break will target 1.1553 support. On the upside, above 1.1821 minor resistance will turn bias neutral again. But outlook will continue to stay bearish as long as 1.1995 resistance holds. 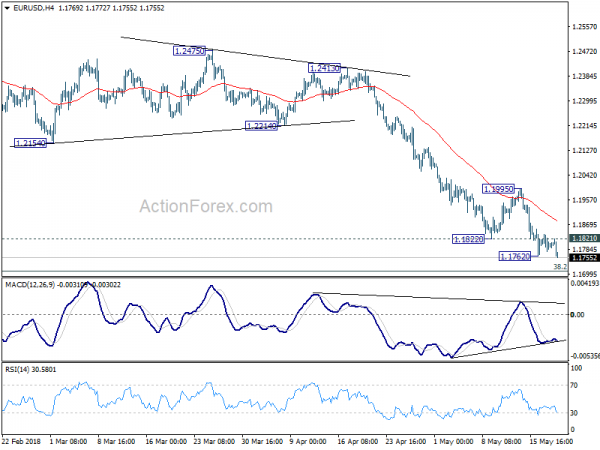 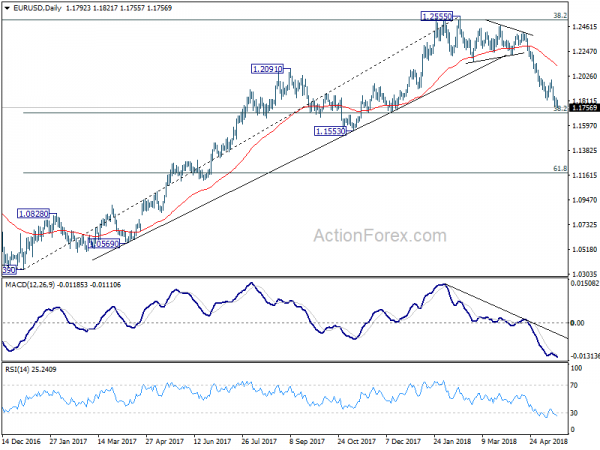