The forex markets are lacking a clear direction today. Commodity currencies were generally higher earlier today but there was no follow through buying. Instead, as in early US session, the Swiss Franc is the strongest one. Dollar is retreating quite notably since yesterday. But again, there is no follow through selling yet. In particular, GBP/USD’s rebound is rather short-lived. BoE Governor Mark Carney’s inflation report hearing provided no special support to the Pound. Similarly, EUR/USD’s recovery also lacks conviction. Traders of both pairs would probably to need wait for heavy weight data today tomorrow, UK CPI and Eurozone PMIs, before making up their minds.

BoE Carney: Much of Q1’s lost output will not be made up

BoE Governor Mark Carney speaks to the Treasury Committee in the parliament for inflation report hearing today. Regarding the dismal Q1 growth, Carney said ” it’s more likely to have been temporary and idiosyncratic factors that slowed the economy.” But the MP didn’t expect much of that “lost output” to be made up. Therefore, BoE forecast 0.4% growth in Q2 only.

Carney noted that there were arguments for and against publishing a rate path. But he pointed out that “e risk of it being interpreted as a promise, as a commitment are real, there are risks of procrastination once you put a path out there… there’s risk of pre-commitment as well”. And thus, the majority of the committee were not in favor of it.

In the same occasion, BoE hawk Michael Saunders urged to “talk about where a neutral level of interest is”. For now, he though “policy is providing stimulus”. And, “if spare capacity gets used up then it is likely over time we’d want to move to a more neutral rate.” Saunders also saw the neutral rate as “significantly lower than it used to be”.

Regarding Q1 growth, Saunders said he “put more weight on the view that the weakness in Q1 GDP reported by the ONS is either erratic as a side effect of the weather or possibly may be revised away.” And, unemployment rate will “fall a little further than our base case over time”.

BoE MPC member Gertjan Vlieghe had his reappointment hearing in the parliament today. Vlieghe prepared a written response to some questions from lawmakers, which could be found here. He noted that his own forecast for growth and inflation is “consistent with a gradually rising path of interest rates”. His central projection sees the requirement of one or two 25bps hike per year over the three year forecast period. And with that, policy rate will be closer to neutral.

Regarding global trade, Vlieghe said a significant broadening of tariffs on goods, or countries could lead to a slowdown in global trade that can hut the UK economy by “several tenths of a percent of GDP or more”. Meanwhile, a global trade war would “simultaneously reduce GDP and increase inflation via higher tariffs”. And, monetary easing would “only be appropriate” in that case if inflation effect is expected to be “short-lived”. But overall, the implication is “not straightforward:”.

EU Malmstrom: They (the US) don’t think it’s enough

EU made a proposal on four areas that the union are willing to discuss with US regarding trade. That talks can only start on the basis that EU is granted permanent exemptions to steel tariffs. But EU Trade Commissioner Cecilia Malmstrom said the US do not that it’s enough. Also, Malmstrom added that EU would not accept quotas unless they were at levels of exports in recent years. And she said, “we are under the impression that somehow they want to limit steel to the U.S., aluminum as well”.

Luxembourg Foreign Minister Jean Asselborn also sounded pessimistic as he expected “another deadlock” when the temporary exemption of steel tariffs expires on June 1. He added that “perhaps we will take a step forward in terms of what we can offer the Americans. It could be that we move towards quotas. Everything is open, but it’s difficult.”

Separately, EU agrees to start trade talks with Australia and New Zealand. Malmstrom will visit both countries in June before negotiators convene in Brussels in July. EU expected the agreement would boost it’s export to the two countries by a third in the long term.

ECB Governing Council member, Finnish Central Bank Governor Erkki Liikanen, tells the Finnish parliament today that it takes time for underlying inflation in the Eurozone to accelerate. And that would support rise in headline inflation. Also, he pointed out that there was an exceptional amount of uncertainty on how ECB’s unconventional monetary policy worked out. However, loose policy is still necessary to boost inflation back to 2% target.

BoJ Governor Haruhiko Kuroda reiterated to the parliament today that the central bank ” won’t end the ultra-easy policy before inflation reaches 2 percent”. And BoJ will “patiently pursue powerful monetary easing”. Though, Kuroda also noted policymakers will take into account the “side effects” such as the “impact of financial institutions, particularly regional banks”.

Regarding the economy, Kuroda said it’s expanding moderately, with consumption helped by loose monetary policy. While there is sustaining momentum in growth, prices lack so. And there is still some distance to inflation target. BoJ will remain mindful of uncertainties on economic and price outlook.

Deputy Governor Masazumi Wakatabe said that BoJ can achieve the inflation target “with the current policy”. Though, “if conditions change and our current policy becomes inappropriate, we may need to change policy.”

Downside momentum in GBP/USD diminished a bit as seen in 4 hour MACD. But there is no clear sign of bottoming yet. As long as 1.3568 minor resistance holds, deeper decline is expected. Current fall from 1.4376 should target 0% retracement of 1.1946 to 1.4376 at 1.3161. Though, break of 1.3568 will indicate short term bottoming and bring stronger rebound first. 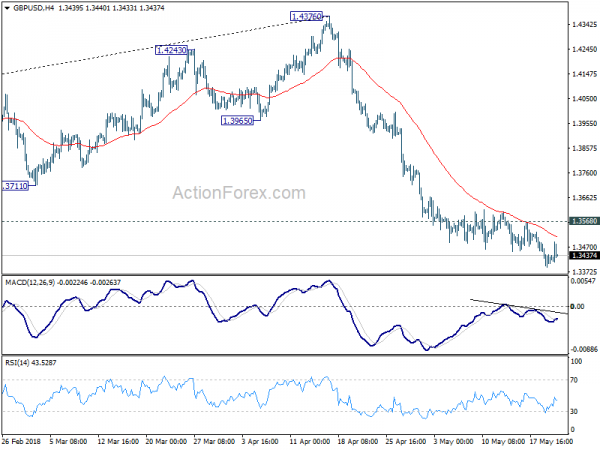 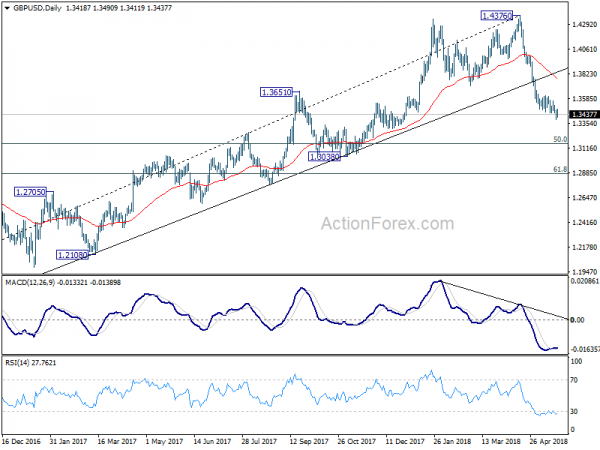