Yen strengthens broadly today and remains the strongest one for the week. New wave of risk aversion trades was triggered by news that US President Donald Trump is using national security as excuse again to study imposition of tariffs on import cars. Nikkei closed down -1.11% at 22437.01 as car maker shares led the markets down. Due to risk aversion, Swiss Franc is also trading generally firmer today, following Yen.

Sterling turned mixed after yesterday’s selloff and it will face another data test in UK retail sales today. The Pound remains the weakest one for the week. Euro also turned mixed as markets await ECB meeting accounts. Based on recent comments from ECB officials, the central bank is still on course to end the asset purchase program this year. The meeting accounts could affirm this view and provide some support to the Euro.

Technically, 3.000 in 10 year US treasury yield will remain a key level to watch today. TNX was held above this level throughout regular trading session overnight, despite dipping to as low as 3.003. But in Asian session, TNX dipped to as low as 2.978, before climbing back above 3.007 in early European session. Renewed decline in TNX would push USD/JPY lower.

Sentiments are hurt by news that the US is considering to impose as much as 25% tariffs on import cars. Similar to steel and aluminium tariffs, national security is used as the excuse for the investigation under Section 232 of the Trade Expansion Act of 1962.

Commerce Secretary Wilbur Ross said in a statement that “there is evidence suggesting that, for decades, imports from abroad have eroded our domestic auto industry.” And, the department will “conduct a thorough, fair, and transparent investigation into whether such imports are weakening our internal economy and may impair the national security.”

In a separate statement, Trump said: “core industries such as automobiles and automotive parts are critical to our strength as a Nation.”

Some see the the car tariffs as a threat to force concessions in NAFTA talks, which has been in deadlock. This could also be an act to address pressure to EU, in particular on Germany for trade talks. But Japan could be the hardest hit if the tariffs are implemented. Japan is one of the few top 10 steel importers to the US who’s not even granted a temporary exemption.

In response to Trump’s probe on auto tariffs, Japanese Chief Cabinet Secretary Suga noted that Japan is closely monitoring the situation and emphasized that any trade steps should be in accordance with WTO rules. Trade Minister Seko said the potential auto tariffs are regrettable and warned that the would cause confusion in the global economy.

The FOMC minutes for the May meeting contain some dovish signs from the Fed. The members remained confident over the economic developments, acknowledging strong employment market and improvement in inflation. However, many of them remained wary of limited wage pressures.

The minutes emphasized “the aim of keeping inflation near its longer run symmetric objective”, suggesting that a certain degree of inflation overshoot would be tolerable. This signals that the rate hike pace might not need to accelerate to catch up with inflation.

Meanwhile, the Fed appeared to have confirmed that a June rate hike is in place. Yet, it made no indication on the path after that. This came in contrast with market speculations which have overshot three hikes already.

More in FOMC’s May Minutes Shows Some Dovish Tweaks

Choe added that “we will neither beg the US for dialogue nor take the trouble to persuade them if they do not want to sit together with us.” And she warned, “whether the US will meet us at a meeting room or encounter us at nuclear-to-nuclear showdown is entirely dependent upon the decision … of the US.”

She went further and said “we can also make the US taste an appalling tragedy it has neither experienced nor even imagined up to now.” And, “as a person involved in the US affairs, I cannot suppress my surprise at such ignorant and stupid remarks gushing out from the mouth of the US vice-president,”

Earlier on Wednesday, Trump said “it could very well happen. Whatever it is, we’ll know next week about Singapore. And if we go, I think it will be a great thing for North Korea.”

German Merkel welcomed in her visit to China

German Chancellor Angela Merkel is having a fruitful visit to China. Chinese Premier Li Keqiang said, in joint appearance with Merkel, that “China’s door is open” and welcome German vehicle makes to invest there. Li also pledged that “if they come across any problems during their investment, especially when it comes to legal protections, I can clearly tell you that China is striding forward to being a country with rule of law.”Li also said China has always supported a unified and prosperous Europe and that China and Germany uphold free trade.

Besides, Li also noted “the euro is an important choice in our foreign currency reserves, and so we are continuing to buy European debt.” And, “even when certain European countries had sovereign debt crises, China kept the broader picture in mind.”

In addition, Merkel also secured the support from China on the current Iran nuclear deal, despite US withdrawal.

In the bigger picture, for now, price actions from 137.49 are viewed as a corrective pattern only. Hence, while deeper decline would be seen, strong support is expected at 38.2% retracement of 109.03 to 137.49 at 126.61 to contain downside and bring rebound. Up trend from 109.03 (2016 low) is expected to resume afterwards. Though, sustained break of 126.61 will be an important sign of trend reversal and will turn focus to 124.08 resistance turned support. 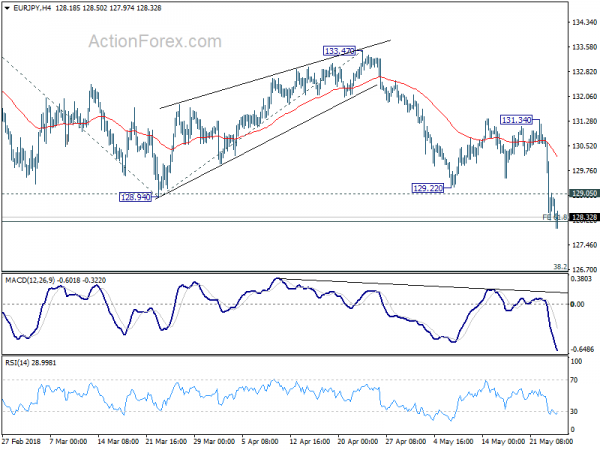 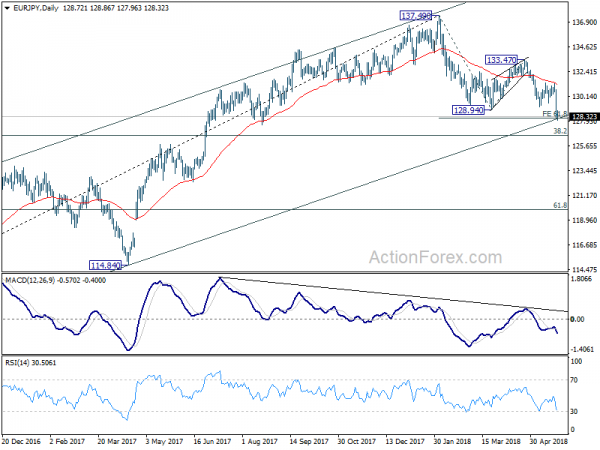