Worries on geopolitical tensions and US policies were the two main forces driving the markets in a holiday shortened week. Yen surged broadly and the relative strength to Swiss Franc argues that worries are mainly on the tensions in Korean Peninsula. The rally in Yen was also accompanied safe haven flows into US treasuries. Long term yields tumbled sharply to the lowest level this year, breaking key near term support levels. Gold surged to as high as 1290.7 and is having its sight on 1300 handle. WTI crude oil also extended recent rise before losing some momentum ahead of 55.24 resistance. In the currency markets, Dollar ended as the weakest major currency as talked down by US President Donald Trump, and dragged down by falling yields. Euro ended as the second weakest ahead of French presidential election and dragged down the Swiss Franc.

Both factors driving the markets were related to Trump. Trump sent a "very power Armada" to Korean peninsula after tweeting that US will solve the North Korea problem alone if China doesn’t help. North Korea responded by warning to take "the toughest counteraction against the provocateurs" and to "sweep the imperialist group with a nuclear fire of justice." On Saturday, North Korean leader Kim Jong Un oversaw a military parade, live broadcast to the world. The parade displayed the country’s weapons including submarine launched ballistic missiles for the first time. Japan National Security Council has already discussed plan to evacuate as many as 57,000 Japanese residing in South Korea in case of crisis. China urged all parties to "stop provoking" and warned that no one would become a winner in wars.

US-Russian relationship not getting better neither

Separately, Trump ordered to drop US’s most powerful non-nuclear bomb, the "Mother of All Bombs" in Afghanistan, targeting ISIS. According to an Afghan official, at least 94 ISIS fighters were killed. Also, three underground tunnels were destroyed. And both US and Afghan officials claimed that no civilians were hurt. Russian government claimed that it has a "big daddy" bomb that is four times the size of the American mother of all bombs. Russian President Vladimir Putin complained that the level of trust with US has dropped after Trump became President of US. Putin criticized that US’s missile strike on Syrian air base as "a clear violation of international law". And the chemical weapon attack last week were "provocations" by terrorists and for accusing the Syrian government.

Separately, in an interview with the Wall Street Journal, Trump complained that US dollar "is getting too strong, and partially that’s my fault because people have confidence in me. But that’s hurting – that will hurt ultimately". He added that "it’s very, very hard to compete when you have a strong dollar and other countries are devaluing their currency". Meanwhile, Trump also reversed his position and said that China is "not currency manipulators". And he hailed that Chinese President Xi Jinping "wants to help us with North Korea." Also, Trump showed in the interview his "respect" for Fed chair Janet Yellen and suggested that he has not decided whether he would reappoint her for the second term.

The comments regarding Dollar was seen as a factor driving the greenback down. However, it remains to be seen if investors’ worries are more than that. To be specific, traders could be getting increasingly doubtful on what Trump would and could do. His failure in health act and travel ban raised a lot of questions on his administrative ability. Now that his stance on China has had a U-turn. His stance on Fed chair Yellen also changed. He stance on war also changed. And that further raises questions on whether he will deliver his election promises.

Technically, the outlooks for stocks, yields and Dollar are bearish in the near term. DJIA’s close below 55 day EMA last week indicates that correction from 21169.11 is still in progress and extending. Further fall should be seen in near term to 38.2% retracement of 17883.56 to 21169.11 at 19914.02. At this point, we’d still expect strong support from this fibonacci level to contain downside and bring rebound. Larger up trend from 17883.56 should resume at a later stage.

Dollar index to have another leg down before correction finishes

Dollar index’s failure to sustain above 55 day EMA, and rejection from near term falling trend line suggests short term topping at 101.34. The development also argue that corrective pattern from 103.82 is developing into a five wave triangle pattern. More downside should be seen in the index in near term with prospect of breaking 98.85 low. But overall, we’d still expect strong support from 50% retracement of 91.91 to 103.82 at 97.86 to contain downside and bring up trend resumption, at a later stage.

Holding on to EUR/USD short

The premises of our strategy last week were totally wrong even though results were not that bad. Focus did turn to Dollar but instead of rallying, it tumbled. Yields and stocks also plummeted after struggling to advance. Our AUD/JPY short (entered at 84.90) was closed at 83.20 at open, with 170 points profit. AUD/JPY then dipped to as low as 81.84 before recovering mildly. The lack of strength in recovery suggests that there is more downside ahead in the cross.

Our EUR/GBP short, (entered at 0.8550) was closed at 0.8545 with 5 points profit. We expected the cross to gyrate sideway with risk of further recovery. But instead, EU/GBP broke 0.8474 support to resume recent decline. More downside would likely be seen in EUR/GBP for 0.8402 support next.

Meanwhile, we sold EUR/USD at market at 1.0580 last week with stop at 1.0690. The pair recovered to 1.0677 then reversed. The trade is held in place mainly thanks to the fact that Euro ended as the second weakest currency next to Dollar. Weakness in Euro is anticipated though as markets pared back hawkish expectations on ECB. While we’re expecting some softness in Dollar in near term, we’d maintain the view that Euro should under perform. So we’ll just hold on to this EUR/USD short trade with stop lowered to 1.0680.

And with so much geopolitical uncertainties around, we’ll refrain from opening new position this week. 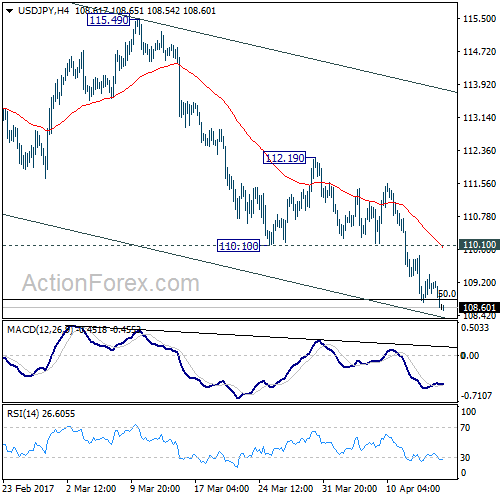 Initial bias in USD/JPY remains on the downside this week. Deeper fall would be seen to 61.8% retracement of 98.97 to 118.65 at 106.48. Sustained break there will pave the way back to 98.97 low. On the upside, break of 110.10 support turned resistance is needed to be the first sign of short term bottoming. Otherwise, outlook will remain mildly bearish in case of recovery. 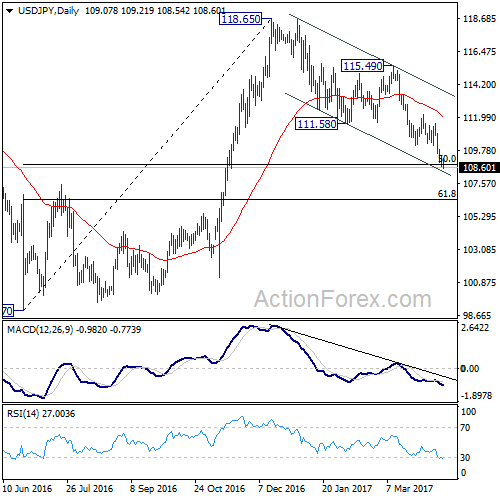 In the bigger picture, price actions from 125.85 high are seen as a corrective pattern. Current development suggests that it’s not completed yet and is extending. In case of deeper decline, downside should be contained by 61.8% retracement of 75.56 to 125.85 at 94.77 to bring rebound. Rise from 75.56 is still expected to resume later after the correction from 125.85 completes. 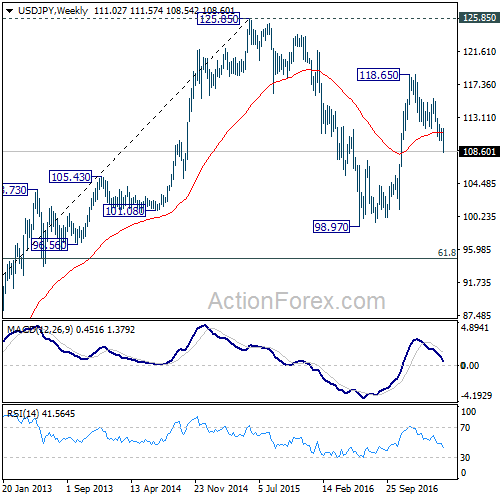 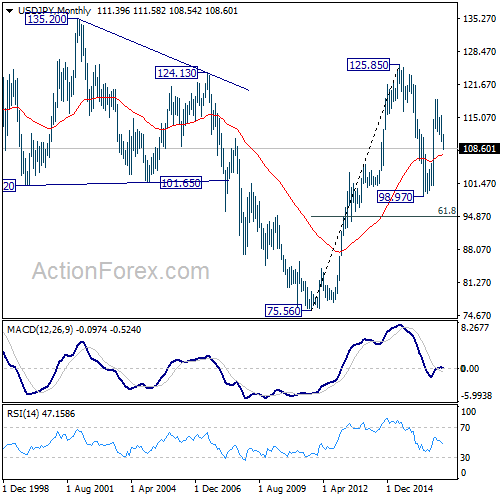