Yen ended the week broadly lower, as the worst performing one, on return of risk appetite. That came with S&P 500 and NASDAQ closing at record highs. Dollar ended as the second weakest one as it’s firstly talked down by Trump. Secondly, markets took Fed Chair Jerome Powell’s speech at Jackson Hole rather negatively. Australian Dollar suffered much volatility on domestic political turmoil. While the Aussie rebounded towards the end of the week as marketed welcomed the new Prime Minister Scott Morrison, it’s indeed the third weakest one in the week overall. On the other hand, Euro ended as the strongest one, primarily because Turkish Lira crisis faded and due to weakest of the others. Dollar, Yen and Sterling all have their own troubles. Swiss Franc was the second strongest.

Talking about Powell, we still believe that his speech in Jackson wasn’t dovish at all. It should be noted first that comments from Fed officials were mixed during the week. On the dovish side, self proclaimed inflation hawk St. Louis Fed President James Bullard said he said no need for Fed to be pre-emptive. And without much inflation, he’d stand pat here “if it was just me”. Also, he warned that Fed should not do anything that knowingly invert the yield curve. The part of yield curve echoed comments of Atlanta Fed President Raphael Bostic.

On the other hand, Cleveland Fed President Loretta Mester upgraded her growth forecast and supported gradual path of monetary accommodation removal. But for now, it’s hard to judge whether the fed funds rate needs to go above neutral rate. But her neutral rate, at 3%, is higher than her fellows. Dallas Fed President Robert Kaplan said his neutral rate is around 2.50-2.75%. And, Fed should “gradually” raise Fed funds rate until this neutral level. And then, he would be “inclined to step back and assess the outlook for the economy and look at a range of other factors”, including the yield curve. That is, Kaplan preferred to raise interest rate first, before looking at the yield curve.

Back to Powell, he noted that “while inflation has recently moved up near 2 percent, we have seen no clear sign of an acceleration above 2 percent, and there does not seem to be an elevated risk of overheating.” It seemed that the markets took that as dovish. And with that setting, Powell was perceived in delivering a message that he’d prefer to pause after hitting neutral rate. That’s likely the part that triggered the selloff in the greenback. But we’d like to emphasize one thing. Powell is known to be a composed, balanced centrist. We doubt if any one would expect him to say something drastic, like Chicago Fed Charles Evans said interest rate may need to overshoot the neutral rate. Also, there are three or four 25bps hike before Fed hits the neutral rate. And for now, taking a cautious view on the picture a year away is that “central” point among Fed policymakers, based on recent comments. So, Powell has presented Fed’s overall view rather appropriately.

On the other hand, our take is that Powell was clear that he will not bow down to Trump’s political pressure, nor is he too worried about the yield curve. After presenting all the theories and case studies, he concluded the speech saying that no acceleration in inflation above 2% is “good news”. And such good news “results in part from the ongoing normalization process”. And he added that ” if the strong growth in income and jobs continues, further gradual increases in the target range for the federal funds rate will likely be appropriate.”

That means, the Fed is doing a great job with monetary policy normalization. The US economy is at this very good state partly because of the work of the Fed. And if job growth, income growth continue, Fed will continue with the rate hikes. It doesn’t matter if the the POTUS is “thrilled” or not. Also, he didn’t even mention yield curve  as a condition like Bullard and Bostic. The overall message to us is rather hawkish.

Dollar index topped out in medium term, now in correction

But anyway, the markets are always right. Based on the technical development, Dollar should have topped and entered in to a medium term correction, with risk of deeper pull back. Last week’s sharp decline suggests that Dollar index has formed a medium term top 96.68, on bearish divergence condition in daily MACD. That came ahead of 61.8% retracement of 103.82 to 88.25 at 97.87. Deeper decline is now expected to 38.2% retracement of 88.25 to 96.98 at 93.64. Considering that this fibonacci level is close to 55 week EMA (now at 93.70). We’d expect strong support around there to bring rebound, at least on first attempt. Meanwhile, break of 96.98 is needed to confirm up trend resumption. Or, consolidation should extend for a while with downside risks, even in case of rebound. And, Sustained break of 93.64 will bring deeper correction to 61.8% retracement at 91.58.

S&P 500 and NASDAQ made record highs, but momentum unconvincing

A question to ask out of the week is whether stock rallies in the US and it’s impact on Yen would continue. Both S&P 500 and NASDAQ defied our expectations of reversal and made new record high last week. But we’d like to point out that upside momentum in both indices is very unconvincing. Bearish divergence is very clear in daily MACD of NASDAQ. Daily MACD in S&P 500 also doesn’t display the kind of momentum that accompanies record runs. For now, we won’t call a top in the two indices yet. But we’ll be alerted if they break last week’s lows at 7787.90 and 2850.62 respectively.

We’d like to point out again that Australian Dollar ended the week as the third weakest after Yen and Dollar. The weakness in the Aussie started before the Liberal’s party’s leadership challenged and was amplified by it. It did rebound as dust settle with a new market friend PMI in Scott Morrison. But Aussie couldn’t reverse all the losses on Thursday and Friday, not even against the weak Dollar. Adding to that, Westpac is now expecting RBA to be on hold through 2018, 2019 and even 2020. Hence, we’d like to look at Aussie short opportunity this week. 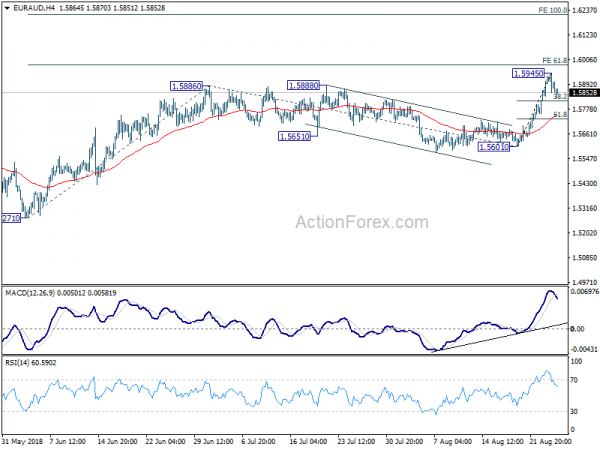 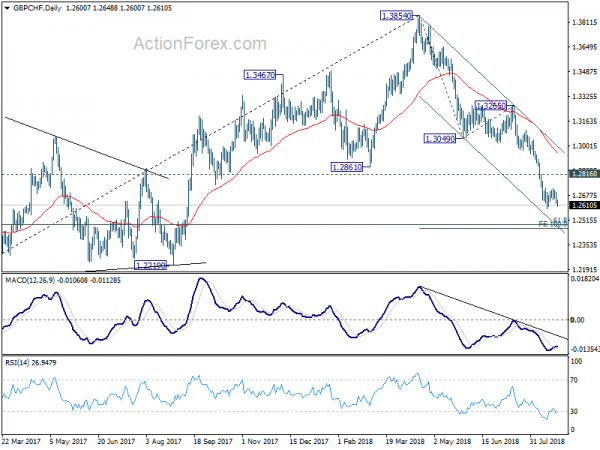 EUR/USD rebounded to as high as 1.1639 last week. The break of medium term channel resistance, with bullish convergence condition in daily MACD, suggests medium term bottoming at 1.1300. Initial bias is on the upside this week for 38.2% retracement of 1.2555 to 1.1300 at 1.1779. We’d expect upside to be limited there, at least on initial attempt, to bring near term reversal. On the downside, below 1.1529 minor support will turn bias back to the downside for retesting 1.1300 low. But after all, consolidation from 1.1300 will extend for a while before completion. 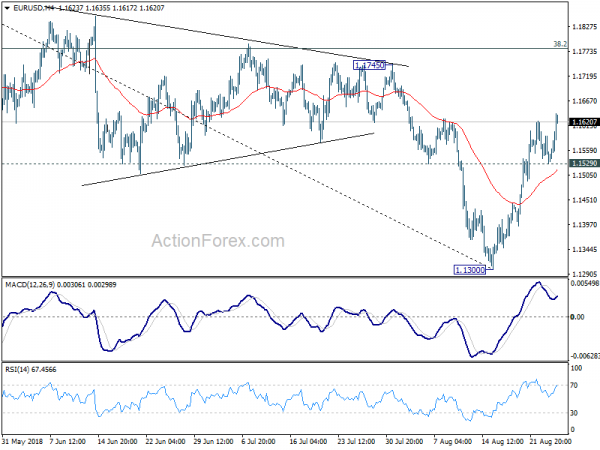 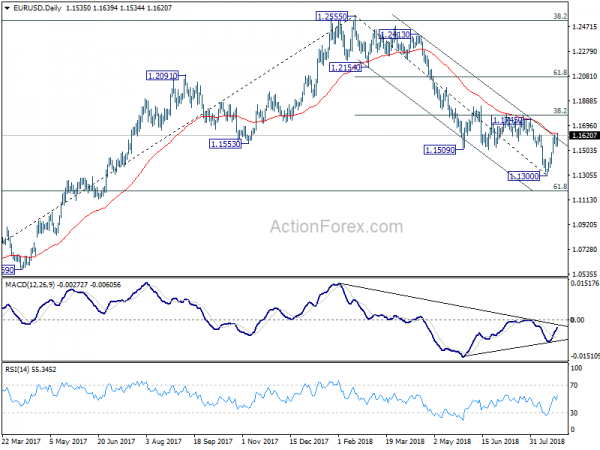 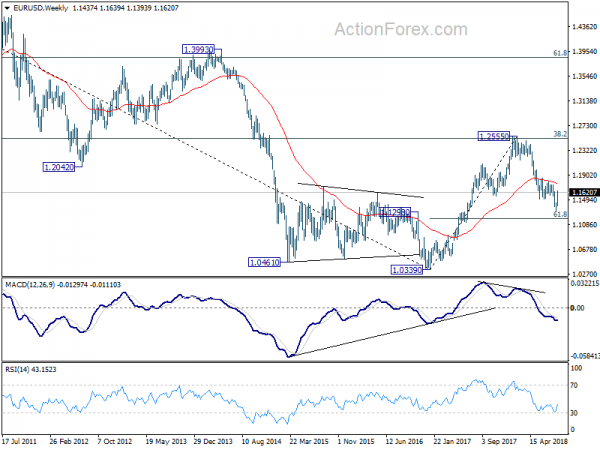 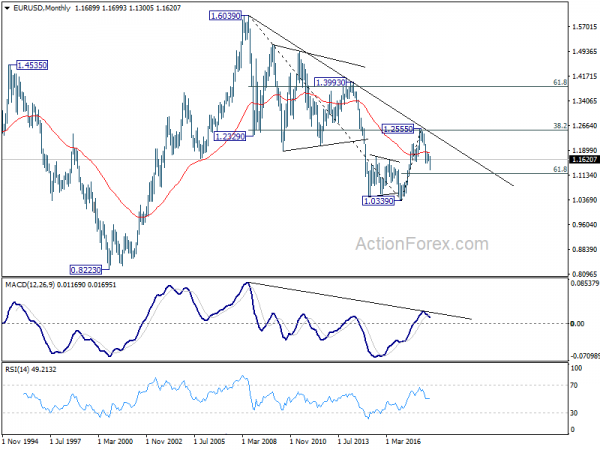