Action Forex
HomeMarket OverviewWeekly ReportTrade War Back as Main Theme as Turkish Crisis Eased, US and...

Trade War Back as Main Theme as Turkish Crisis Eased, US and China to Meet

The forex markets turned into consolidative mode last week as Dollar and Yen lost momentum. Turkish currency crisis hit a climax on Monday but worries eased after the government’s measures were well taken by investors. The fear of extra sanctions by the US on Turkey caused some jitters. But the muted reactions towards the S&P and Moody’s downgrade of Turkey showed that the crisis is temporarily over. And the situation has turned from immediate shock to long term pain. The lack of strength in European stocks rebound was a reflection of this.

Another theme emerged as the US and China agreed to resume trade negotiations. Chinese Vice Commerce Minister Wang Shouwen will meet with US Secretary for International Affairs David Malpass this week, in Washington. But we have very low expectations on the meeting. Firstly, these two are rather low level official who cannot make a decision. Secondly, Malpass is from the team of Treasury Steven Mnuchin, who’s been constantly isolated by trade hawks.

Nonetheless, separately, US Trade Representative doubled the length of tariff hearing on USD 200B of China goods, due to strong demand. That’s a sign that Trump might soften his trade attack on China due to domestic pressure. Still, as Chinese stocks’ fall to new low showed that investors are possibly as pessimistic as we are.

The above developments contributed to stabilization of market sentiments in some ways. While risk aversion stayed generally, globally, worries were eased. New Zealand Dollar ended the week as the strongest one. But that’s mainly because the Kiwi was digesting recent dovish RBNZ triggered sharp fall. Canadian Dollar followed as the second strongest. Strong Canadian CPI, which hit 3% level, should seal the deal of an October BoC hike. There are speculations that BoC could hike as soon as in September. But we still lean towards an October move.

On the other hand, Sterling ended the week as the weakest one. Economic data from the UK, CPI, employment and retail sales, were generally solid. But they’re not strong enough to alter BoE’s rate path. And Brexit uncertainties continue as it seems like a no-deal one is the base case now. Swiss Franc ended as the second weakest one, followed by Dollar.

Technically, EUR/USD and AUD/USD should have bottomed out in near term. Adding to weakness in USD/CAD and USD/JPY, the greenback could have entered into a consolidation phase with some downside risks. Meanwhile, we’d like to emphasize that the recoveries in EUR/JPY and GBP/JPY are weak so far. Thus, there is no confirmation of near term bottoming yet. 1.3049 near term support in USD/CAD now looks vulnerable after Friday’s selloff. Break will put medium term channel support into focus.

DOW showed strong resilience last week despite risk aversion elsewhere globally. That’s partly thanks to strong results of Waltmart. But it also suggested that the US economy might be less vulnerable to problems in emerging markets. Despite a sharp dip to 24956.77, DOW drew strong support form 55 day EMA and rebounded. Subsequent breach of 2569.72 near term resistance suggests that choppy rise form 23344.52 has resumed. And near term outlook stays bullish for 25800.35/26616.71 resistance. Still, we’re viewing price actions from 26616.71 as a consolidation pattern that’s not completed yet. There should be strong resistance from 25800.35/26616.71 to limit upside and bring near term reversal, to start the third leg of the consolidation pattern.

DAX dropped to as low as 12120.65 last week and failed to stage a meaningful recovery from there. Eurozone’s vulnerability to emerging market problem, in particular Turkey, is an important reason for the weakness. With medium term rising trend line broken firmly, near term outlook is turned rather bearish. Immediate focus in on 12104.41 support this week. Decisive break there would pave the way to 11726.62 support and possibly below. Price actions from 13596.89 are seen as a consolidation pattern for now. Hence, DAX could indeed drop to 50% retracement of 9214.09 to 13596.89 at 11405.49 before forming a medium term bottom.

Nikkei showed some resilience, but risk tilted to the downside

Performance of Nikkei was nowhere near being strong. But it did displayed some resilience. However, as the index is limited below 55 day EMA with the current recovery, risk is a bit tilted to the downside. And break of last week’s low at 21851.32 will put 21462.94 support into focus. Break there will mark completion of the rebound from 20347.49. And the corrective pattern from 24129.34 could have then started the third leg to 20347.49 and below. Nonetheless, firm break of 55 day EMA (now at 22392.22) will save near term bullishness and turn focus back to 23050.39 resistance.

China’s stock market was the worst performing one comparing to the above. The selloff in tech giant Tencent was certainly a factor. But more importantly, it seemed that nobody in China cheered the resumption of trade talks with US. That’s, to us, is loud message that trade and more importantly, political tensions with the US are going to worsen before easing.

The Shanghai SSE’s close below July low at 2691.02 marked resumption of the fall from January high at 3587.03. More importantly, it now put key support at 2638.30 (2016 low) into focus. Barring government intervention, the SSE will likely dive through this support level ahead. 2500 could a psychological level to defend. But worse come to worst, 2000 could be the target of this medium term down move.

Of course, one may argue that the recovery in Yuan showed some optimism. But, USD/CNH’s (offshore Yuan) pull back from 6.9586 could merely be reflecting general retreat in Dollar. That is seen most notably in USD/TRY, and also clearly in EUR/USD. So we’re not seeing the pull back in USD/CNH as a sign of relieve of easing trade tension. The depth of the pull back should reflect the progress of the trade talks. For now, USD/CNH will still, more likely than not, pass through 6.9871 key resistance to 7.0 handle.

A wild wide in USD/TRY but things should have calmed

Turkey’s situation is so clearly displayed in the chart of USD/TRY. After initial spike to 7.2069, USD/TRY gyrated lower as markets responded rather positively to the government’s measures to stabilize the exchange rate. Friday’s rebound was a reflection of concerns over more sanctions from the US, due to refusal to release American Pastor. But there was no follow through selling in the Lira since then.

On Friday, S&P rating agency lowered Turkey’s long-term foreign currency sovereign credit rating by one notch to B+. The long-term local currency rating was also lowered to BB-. Outlook was kept at stable though. S&P also projected the Turkish economy to contract in 2019. Moody’s lowered Turkey’s  sovereign credit rating to Ba3 and changed its outlook to negative. But, the Lira showed no reaction at all. The immediate crisis should be over and the situation should have entered in the stage of long-term pain.

Break of 95.51 will indicate that DXY has topped out earlier than expected. Some correction would then be seen. However, the rise from 88.25 displays a five way impulsive structure. That means, even in case of a correction, we’d expect another medium term up trend to follow afterwards to extend the rise form 88.25. 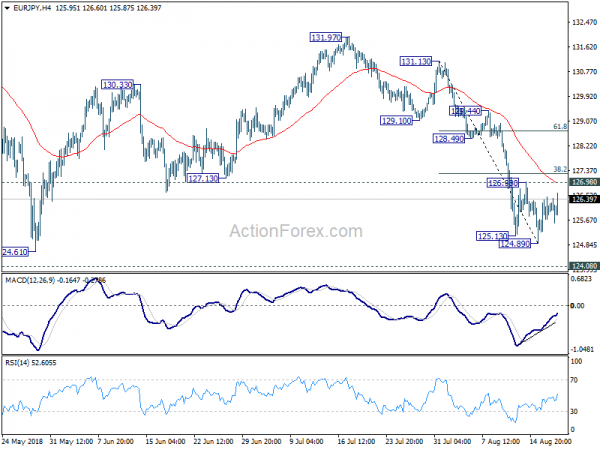 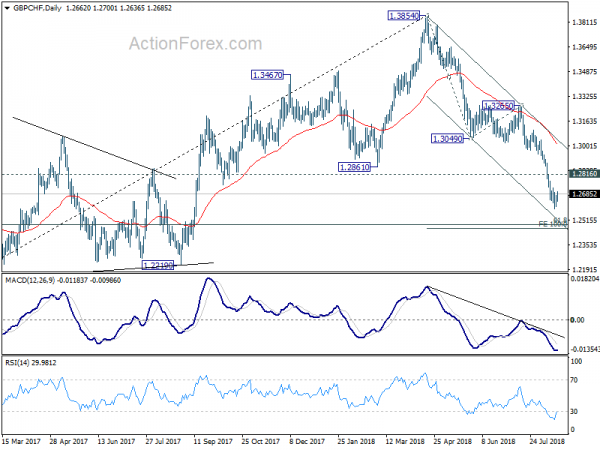 As mentioned at the beginning, the markets are generally in consolidation mode currently. So, we’ll keep our hands off from new position. However,

EUR/USD recovered after initial fall to 1.1300 last week. The break of 1.1430 minor resistance indicates short term bottoming, on mild bullish convergence condition in 4 hour MACD. Initial bias is mildly on the upside this week, for rebound to 1.1509 support turned resistance and possibly above. However, we’d expect upside to be limited below 1.1745 resistance. On the downside, break of 1.1300 support is now needed to confirm down trend resumption. Otherwise, near term outlook is neutral for more consolidation first. 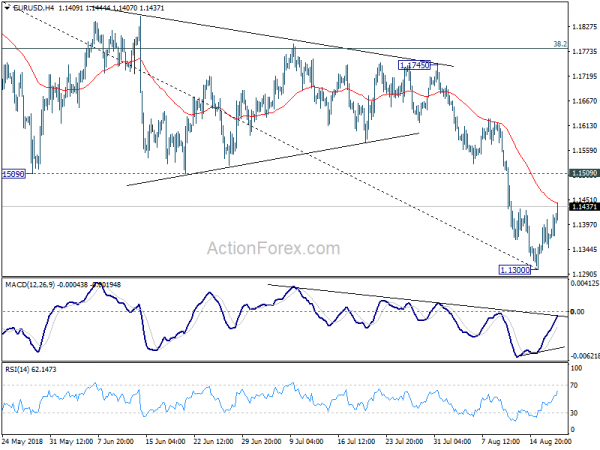 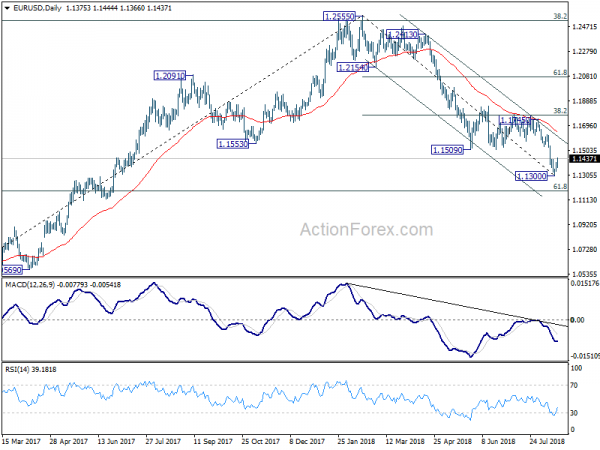 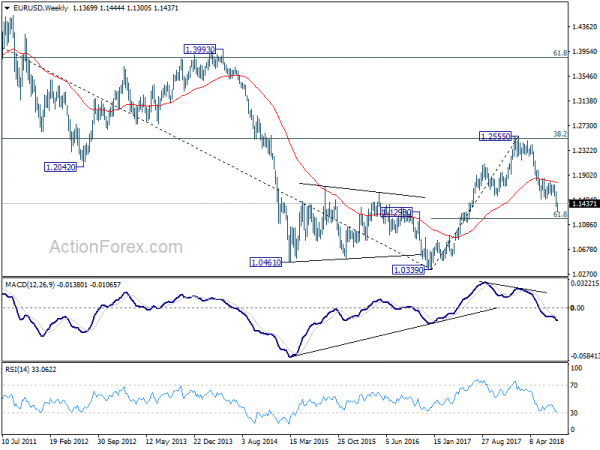 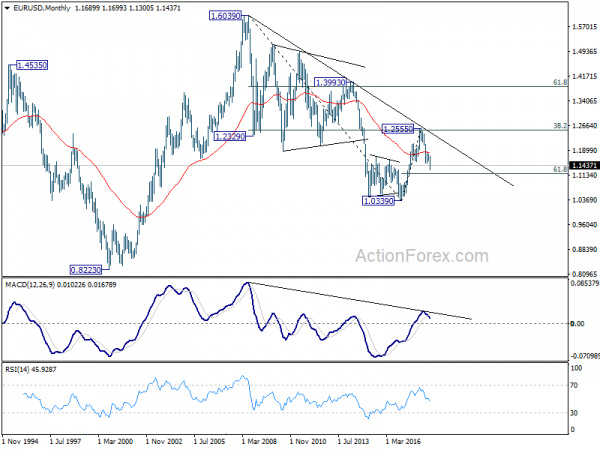