Dollar and US Yields at Critical Levels, Fate on Fed’s Hands

Yen ended last week as the weakest one as the global markets were in full risk on mode. DOW finally made a new record high, together with S&P 500 and the strength is not limited to the US. Nikkei closed up 3.36% and is now very close to 24129.34 (2018 high). Even the China Shanghai SSE closed up 4.32%, just missing 2800 handle. It’s the same in Europe with DAX gained 2.53% and CAC added 2.64%. Treasury yields across the Atlantic also soared with US 10-year yield reclaimed 3% handle. German 10 year bund yields also breached 0.5% but failed to stand firm above.

The escalation of US-China trade war was largely ignored by the markets. Dollar ended as the second weakest one. New Zealand Dollar and Australia Dollar, two currencies most sensitive to US-China trade tensions, were the best preforming ones. Meanwhile, Sterling was the third weakest as Brexit negotiation is now at an impasse after the informal EU summit in Austria.

Looking back, the reactions to new round of US-China tariffs showed that investors were actually relieved. USTR announced 10% tariffs on USD 200B in Chinese imports, effective September 24. Tariff ate will be raised to 25% on January 1, 2019. China swiftly announced retaliation on USD 60B imports, tariff rates at 5% and 10%.

It’s certainly not the worst case scenario, and far from. So what should be the worst? Imagine Trump kept the original rate of 25% tariffs, effective September 24 too. At the same time, he started the process on tariffs on USD 267B of Chinese goods immediately, and assume that the rate is also 25%. Then we could have 25% tariffs on nearly all Chinese imports by year end, with equivalent countermeasures by China. Comparing to this worst case scenario, the move announced last week was just a mickey mouse step.

Dollar and treasury yield at critical levels, FOMC to decide their fate

Anyway, the overall developments now put Dollar and yields at very critical levels. Both 10- and 30-year yields are now pressing key long term resistance. At the same time, Dollar is trying to draw support from key level against Euro. Technically, our base case is for Dollar to have a strong rebound and bullish reversal from the current level. Meanwhile, treasury yields would finally take out the multi decade trend defining resistances. But we can be wrong.

The eventual outcome will very much depend on FOMC meeting this week. There is no doubt that Fed will raise federal funds rate by 25bps to 2.00-2.25%. Voting could be a point of interest as some doves have voiced concerns over flattening yield curve. But more importantly, the new economic projections could be most market moving. In particular, Fed’s projections on the longer run federal funds rate. It’s estimated to be at 2.9% in June projections. And it’s the point where policymakers could see interest rate of being restrictive going beyond. This provides the anchor for assessing how far the current rate hike cycle would go. Any uplift in this figure would send Dollar and yields soaring.

US yield surged sharply, more strength at the long end

It should also be noted if the bullish case is realized, the multi-decade channel resistance will also be taken out rather decisively. And it’s certainly a very bullish development for yields.

Also, next medium term rally will have multi-decade channel resistance taken out. Prior key resistance at 3.036 will be left behind formally. And the development could establish the next medium to long term up trend back towards 5.316. That’s a confirmation of end of the era of falling US yields.

The above bullish case in yield is yet to be confirmed. But if they do happen, it should be very strong support to the greenback. And talking about Dollar, the selloff in the greenback last week was not too unexpected. Dollar index’s correction from 96.68 extended to as low as 93.81 but was kept above 38.2% retracement of 88.25 to 96.98 at 93.64 so far. That was equivalent of EUR/USD breaching 1.1779 fibonacci resistance. Also the structure of the decline from 96.98 is so far corrective looking, which doesn’t violate our view.

For now, we’d continue to expect this 93.64 fibonacci level to hold, as it’s also in proximity to 55 week EMA (now at 93.86). There would be high chance of lifting DXY through 95.73 resistance should TNX and TYX could take out the above mentioned key resistance levels. However, strong rejections by the resistance in TNX and TYX would likely drag dollar index through 93.64 to set up deeper medium term correction.

Our sell EUR/GBP strategy was cancelled last week as the cross dipped through 0.8875 support first, before staging a strong rebound towards weekly close. But admittedly, the strategy was wrong. We anticipated some negative news in the early part of the week but eventually, something would be agreed at the EU summit regarding Brexit deal. Unfortunately, the only thing that EU and UK agreed was that they disagreed. EU saw UK Prime Minister Theresa May’s Chequer’s plan us unworkable. May blamed that EU provided no counterproposals after rejection. The deadlock will continue at least until the next EU summit in October.

On this week’s strategy, we’d like to take on a higher risk one in buying Dollar. As noted above, technically, it’s the point where Dollar should have a rebound. Based on recent strong data, we don’t expect a dovish twist in FOMC announcement. The most dovish scenario is that it doesn’t hawkish-up and disappoints the markets. Yen is naturally a good choice considering strong stock and yield rally. But we’d tend to avoid it as it’s too close to 113.17 resistance. EUR/AUD’s rejection from 1.6172 suggests that Aussie is having an upper hand over Euro. EUR/GBP’s strong rebound from 0.8847 indicates Sterling is even weaker. Hence, it brings us back to the miserable pound. 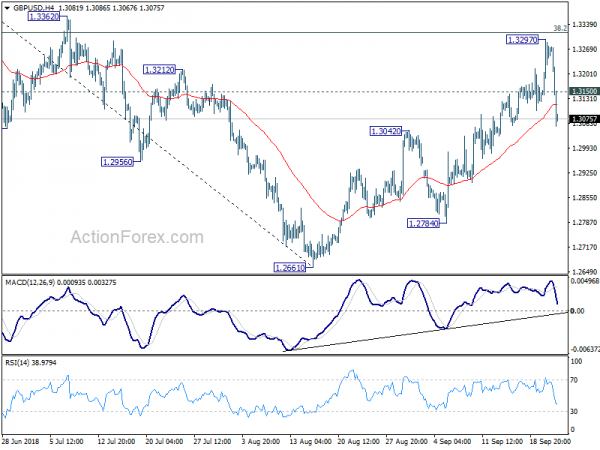 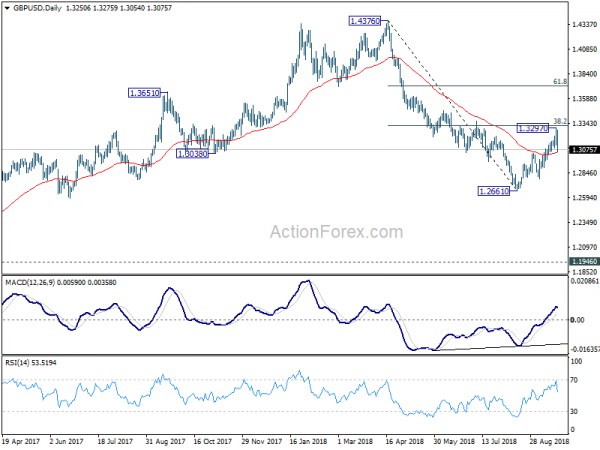 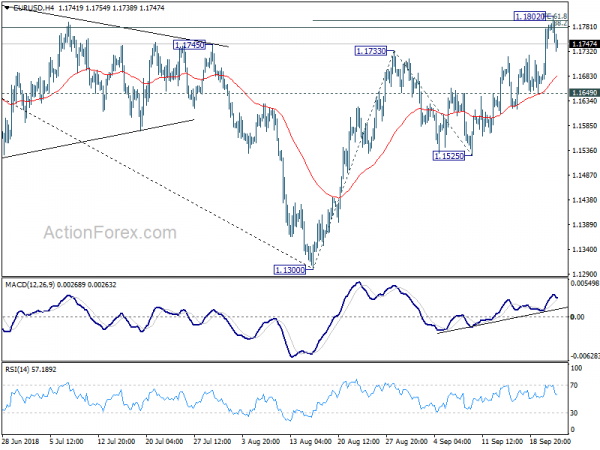 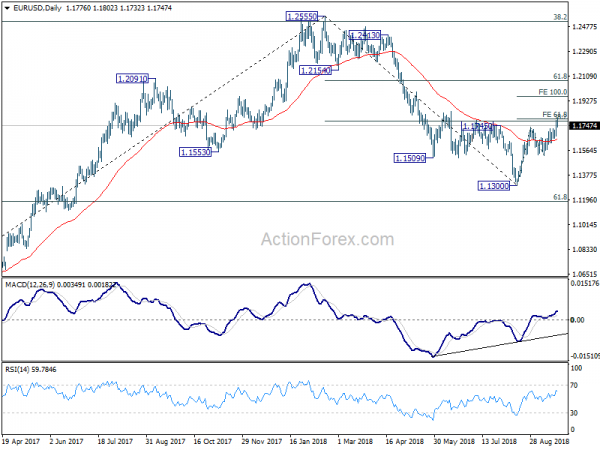 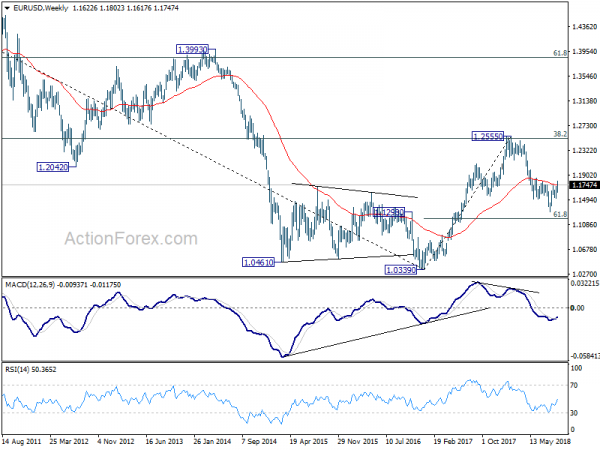 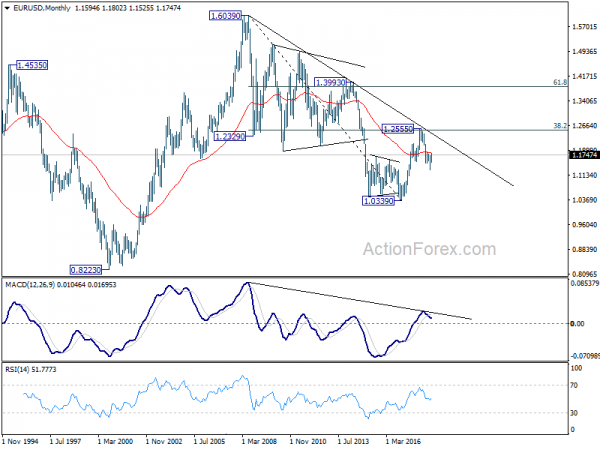