Risk sentiments continued to recover last week as Fed officials indicated they would be patient before making the next rate move. Positive developments of US-China trade talks also helped. One notable development was the rebound in US treasury yields as 10-year yield reclaimed 2.7 while 30-year yield is back above 3.0. Japan 10-year JGB yield also turned positive These are signs of stabilization in the financial markets. The recording setting government shutdown in the US is so far having little impact on the markets too.

As a result, Yen ended as the weakest one for the week, followed by Dollar, and then Swiss Franc. New Zealand Dollar was the strongest, followed by Australian Dollar. This is a rather reasonable result of return of risk appetite. Sterling ended as the third strongest as the Brexit parliamentary vote is approaching and the chance of no-Brexit is rising. Canadian Dollar was also strong, but it suffered some setback as oil prices pullback quite notably on Friday. Brexit is set to be the major focus this week.

As of Saturday, the US government shutdown has stretched into its 22nd consecutive days, surpassing the 21-day record set in 1995-96. Trump stormed out of a meeting with Congressional leaders as his request for funding for the border wall of any form was rejected bluntly by Democrats. On Friday, Trump said “the easy solution is for me to call a national emergency… I have the absolute right to do it.” But he added “I’m not going to do it so fast. Because this is something Congress should do.”

The is no end in sight for the shutdown. Some 800k government employees missed their first paycheck on Friday. Around 380k workers have been furloughed. And should there is no breakthrough next week, the furloughed workers could be counted as unemployed. The would result in a big contraction of employment to be shown in the January non-farm payroll report, with a surge in unemployment rate, probably back above 4%.

For now, there is little impact on the financial markets. But investors might start to feeling something as it extends into uncharted territory.

Futures suggest Fed to stand pat for 2019, but less pessimistic after “patient” fedspeaks

The messages from Fed officials as well as the FOMC minutes were very clear last week. With inflation low and under control, Fed has the room to be patient to wait-and-see the developments in the economy before raising interest rate again. Officials including Chair Jerome Powell want that patience too.

The December FOMC minutes also noted that “many participants” preferred to be “patient about further policy firming”, amidst “muted inflation pressures”. And, “participants expressed that recent developments, including the volatility in financial markets and the increased concerns about global growth, made the appropriate extent and timing of future policy firming less clear than earlier”. More in FOMC Minutes Reveal Dovish Notes Which Were Hidden in December.

Chinese Yuan rebounded remarkably after trade talks with US in Beijing

The vice ministerial level US-China trade talks ended in Beijing with one-day extension. The extension itself was seen as a positive sign. Chinese MOFCOM later said there “extensive, in-depth and meticulous exchanges on trade issues and structural issues of common concern, which enhanced mutual understanding and laid the foundation for resolving mutual concerns.” USTR’s statement was more neutral and just described what were being discussed.

Nevertheless, the US team raised the “need for any agreement to provide for complete implementation subject to ongoing verification and effective enforcement”. This is a legitimate concern based on China’s history of failing promising. China Vice Premier Liu He is planning a visit to Washington later this month. And we’ll see if Liu would bring something promising.

The Chinese Yuan staged a remarkable come back last week. And that’s the most concrete indication of positive development in trade negotiations. Current development suggests medium topping at 6.9804 in USD/CNH (offshore Yuan), on bearish divergence condition in daily MACD. 7 handle was also safely defended. There For now, USD/CNH should drop to 38.2% retracement of 6.2359 to 6.9804 at 6.6959. Firm break there will pave the way to 6.5202.

UK will definitely be the center of focus ahead as the meaningful vote of Prime Minister Theresa May’s Brexit deal looms. While May might still be spending her last effort to secure approval of the Commons, it’s just remotely likely for it to happen. As the deal is voted down, the government should have a plan B ready within days. May’s office was quite to deny reports regarding Article 50 extension. But no matter what route the plan B paves, it’s unlikely to match the March 29 deadline. And Brexit would be delayed.

There are basically three options: Just leave without a deal; general election; or a second referendum. There should be enough opposition to no-deal Brexit in the parliament. And there is no sign of campaigning for no-deal seen. So this route is rather unlikely. Labour leader Jeremy Corbyn is pushing for a general election. But we can’t see how a change in leadership would prompt EU to re-open negotiation. Though, it’s still possible.

Pro-EU groups are pushing for second referendum. In the Roadmap to a People’s Vote, the group is pushing for a binary referendum: either the Government’s deal vs staying in the EU; or an alternative, deliverable form of Brexit vs staying in. But they do not entirely rule out a referendum with three options, including no-deal Brexit.

There are a lot of uncertainties ahead and chance of no-Brexit at all is rising. That, together with the inevitable delay in Brexit, has pushed up the Pound last week. For now, we’re seeing a second referendum as the most likely outcome. But the result could be highly dependent on how it’s structured. If it’s a binary referendum, more Britons may opt for respecting the result of the 2016 referendum and choose May’s deal. However, if there are three options, votes maybe piled towards no-Brexit, just for the sake of avoiding a hard-Brexit. It’s not quite predictable for now.

Our strategy to buy USD/CHF on break of 0.9965 last week was not filled. EUR/CHF did stage a strong rebound as anticipated. And Swiss Franc was the third weakest over the week. However, Dollar was even weaker after Fed officials’ comments. USD/CHF, thus, went the other direction. The development now suggests USD/CHF’s choppy fall from 1.0128 is a correction of larger degree. That is prospect of further decline to 0.9541 support before bottoming. We’ll cancel the order first.

On new strategy, Sterling long is rather tempting but we’d prefer to continue to avoid it due to Brexit uncertainties. Stocks and Yen crosses seemed to be losing momentum towards the end of the week but there is no clear indication of topping yet. Similar, WTI crude oil also looks like it’s topping ahead of 54.61 resistance but there is no confirmation. Dollar’s decline looks set to extend but it’s seen as in a correction that could end any time. In particular, fortune of Dollar and Yen could have a turn should stocks and oil top soon.

GBP/USD’s rebound from 1.2391 extended to as high as 1.2865 last week and broke a.2814 resistance. The development now suggests that such rebound is correcting whole down trend from 1.4376. Initial bias remains on the upside this week for 1.3174 resistance, which is close to 38.2% retracement of 1.4376 to 1.2391 at 1.3149. We’d expect strong resistance from there to limit upside, at least on first attempt. On the downside, break of 1.2709 minor support will argue that such rebound is completed and turn bias back to the downside for retesting 1.2391 low. 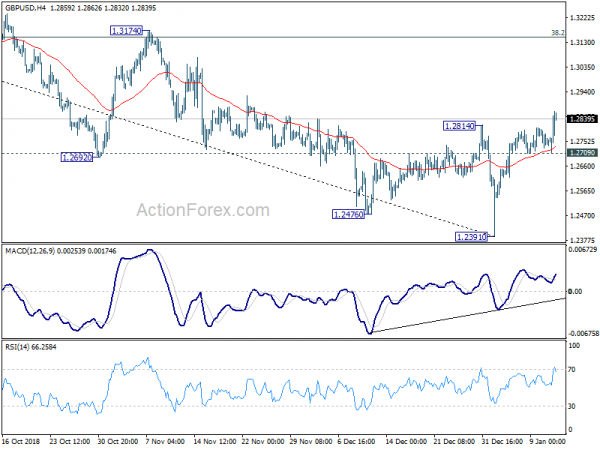 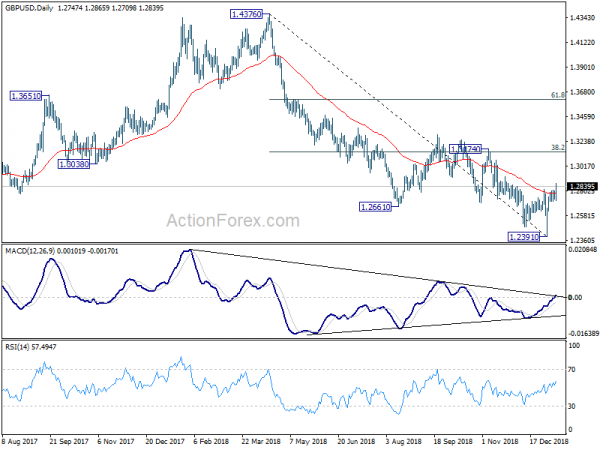 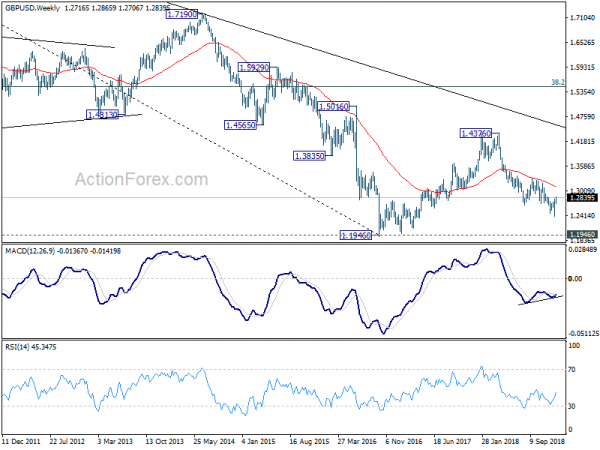 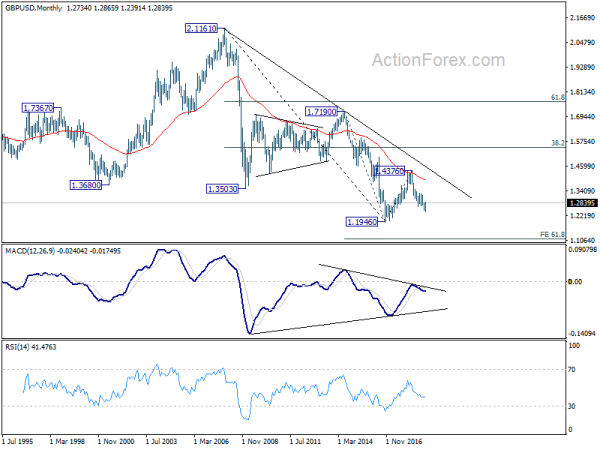 Coronavirus cases in South Korea and Italy continue to surge