Dollar Down But Not Out after Fed, Oil Lifted Canadian, Iron Ore Boosted Australian

Fed’s dovish turn occupied a lot of head lines last week. Stocks were lifted while Dollar was pressured. However, the moves were not as drastic as they could seem to be. There was no upside acceleration in stocks. Treasury yield actually dropped at the long end, indicating that expectations on inflation and economy had not turned despite Fed’s patience stance. Meanwhile, Dollar index is just extending recent corrective pull back, also without downside acceleration. The rally in AUD/USD and decline in USD/CAD were more due to rise in iron ore prices and oil prices.

Over the week, Sterling was the weakest one as Brexit enters a new chapter. Within a few days, the UK government might be ready to unveil what alternative proposal on Irish border backstop they have, to persuade EU to reopen withdrawal agreement negotiation. Swiss Franc was the second weakest. And Dollar was just the third weakest. Australian, Canadian, and New Zealand Dollar were the strongest in order.

To recap, FOMC left federal funds rate unchanged at 2.25-2.50% as widely expected. The accompanying statement contained some dovish changes. Firstly, Fed dropped the language regarding “some further gradual increases in” interest rates. Secondly, Fed said it would be “patient as it determines what future adjustments” to the policy rate, due to “global economic and financial developments and muted inflation pressures”. Thirdly, Fed also noted it’s “prepared to adjust any of the details for completing balance sheet normalization in light of economic and financial developments”. No detail was provided for the change in balance sheet reduction plan. But Fed is at least ready to cut it short if needed.

The reactions in the stocks markets to Fed was positive but not overwhelming. DOW extended recent rally to close at 25063.89, and reclaimed 25k handle. But structurally, there is no clear upside acceleration. We’d expect DOW to start losing momentum as it approaches 78.6% retracement of 26951.81 to 21712.53 at 25830.60. Meanwhile, break of 24323.94 support will argue that the rebound has completed earlier than expected.

Overall, DOW is in a long term corrective pattern, consolidating the up trend from 15450.56. It would extend for a while, with at least another medium term decline.

10-year yield dropped after Fed, but may find support soon.

At this point, another fall in TNX remains likely as long as 2.799 resistance holds. But downside potential should be limited as it’s close to 38.2% retracement of 1.336 to 3.248 at 3.517, which is close to long term channel support too.

Canadian Dollar was the second strongest for the week, partly thanks to weakness in Dollar. But more importantly, the Loonie was helped by surge in oil prices. Additionally, a Reuters survey showed that production from OPEC dropped by -0.89m bpd in January to 30.98m bpd. It’s the largest monthly decline in two years. With the support from oil prices, Loonie will also look into this week’s Canadian job data for more strength.

WTI crude oil’s price actions since mid-January now proved to be just consolidations, rather than setting up a reversal. WTI resumed the rise from 42.05 last week and rose to close the week strongly at 55.45. 4 hour MACD and RSI suggests that the rebound from 42.05 low is picking up momentum again. Focus is now on 38.2% retracement of 77.06 to 42.05 at 55.42. Firm break will pave the way to 61.8% retracement at 63.68. And this bullish base will be slightly favored as long as 51.37 support holds. 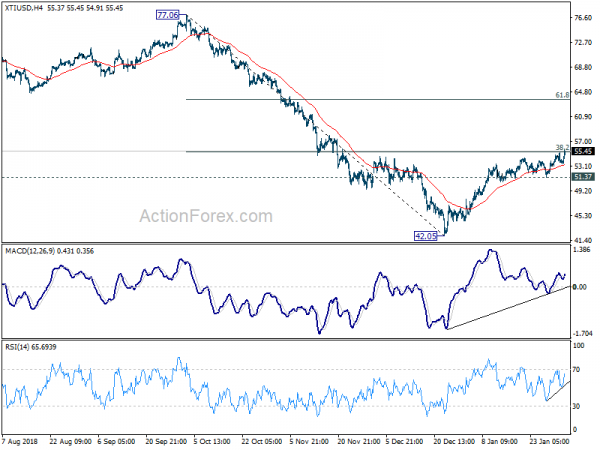 Australian Dollar’s rally was more related to surge in iron ore prices, the country’s top exports. Driving price higher was the concern on Brazilian supply. In response to the collapse of a tailings dam at its Feijao iron ore mine last weekend, Brazilian miner Vale announced that it will decommission all of its upstream tailings dams over the next three years. That could sideline around 2.5% of the seaborne trade.

Also, the China steel industry PMI jumped sharply to 51.5 in January, up from 45.6 in December. In particular, new orders subindex rose to 53.4, up from 39.5. The data suggests improvement in the sector with surge in steel demand.

Iron Ore 62% FE,CFR CHINA jumped to 86.93 last week, up 16.6%. AUD/USD’s fate, and whether it could break 0.74 handle, will depend more on how far iron ore could go. There is much chance of hawkish surprise from RBA this week. Indeed, there is dovish potential in RBA’s new economic projections.

Our buy USD/CHF at 0.9880 order (as noted last week) was again not filled as USD/CHF dipped to 0.9905 only. Fundamentally, we’d like to point out again that despite Fed’s dovish turn, Dollar wasn’t that weak overall. As mentioned above, the dollar index is just extending recent consolidation, with no clear sign of trend reversal yet. Markets are just pricing in Fed to stand pat through 2019, which they have been doing that for nearly a month already. There is chance of a Dollar comeback should 10-year yield rebounds from the above mentioned channel support. And Swiss Franc was indeed the weaker one. 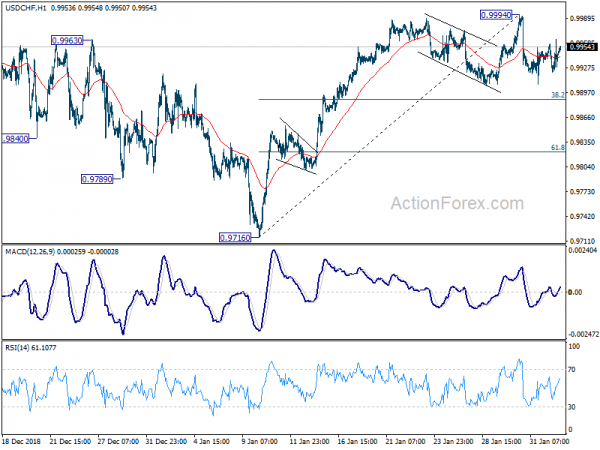 In the bigger picture, we maintain the view that corrective fall from 1.0128 has completed at 0.9716 after drawing support from medium term trend line, on bullish convergence condition in 4 hour MACD. Rise from 0.9716 is likely resuming whole up trend from 0.9186. 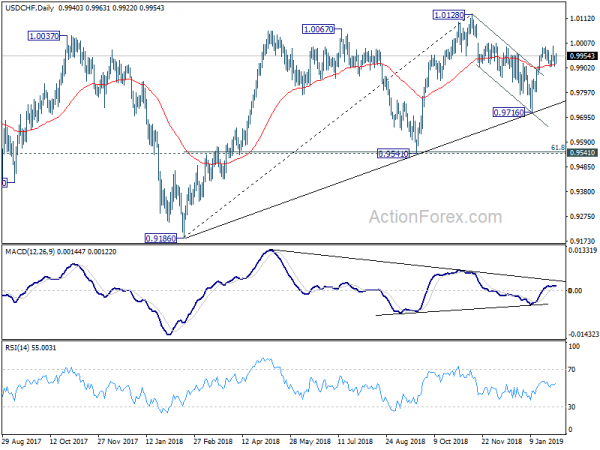 As for other strategies, we’d firstly avoid Sterling for the neverending drama. We’d a bit skeptical on whether WTI crude oil could extend rebound through 55.42 key fibonacci level decisively. And the surge in iron ore price looks stretched while there is dovish possibility in RBA statement economic projections. Thus, we’d avoid both Canadian and Australian. We’re still viewing Yen’s rebound from the flash crash low as correction. So we’d prefer not to ride on it, but wait to trade on a reversal later. Well, so, we’ll keep our hands off other strategies first. 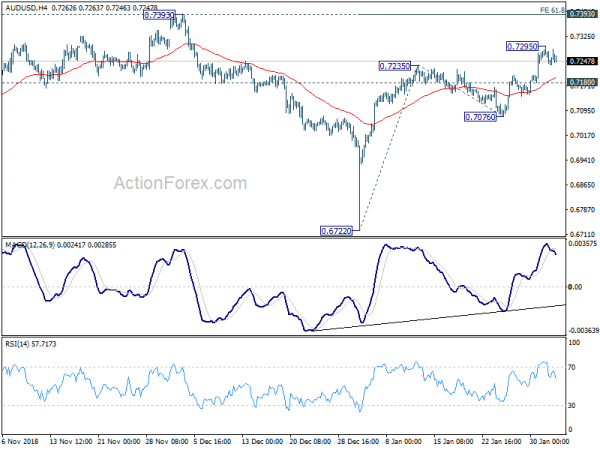 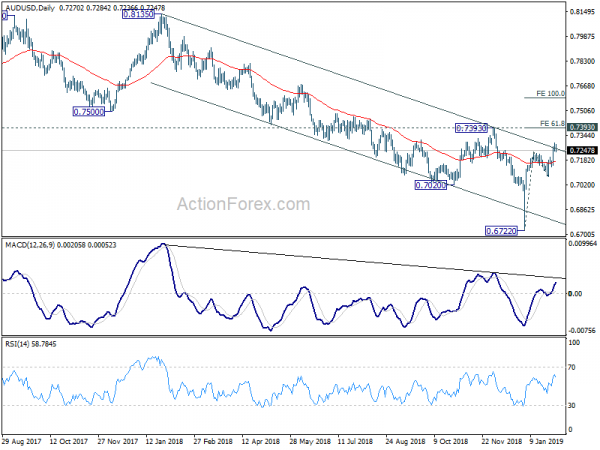 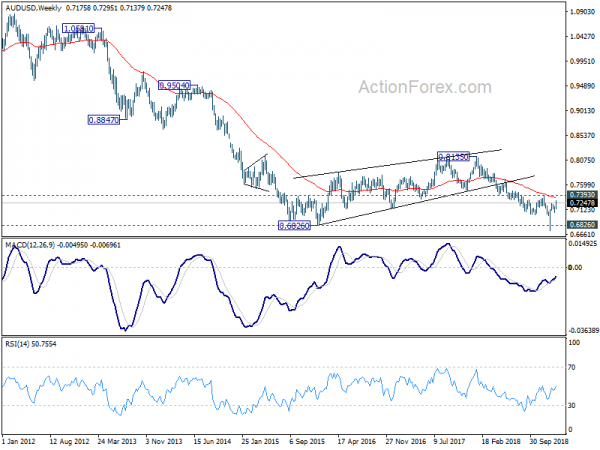 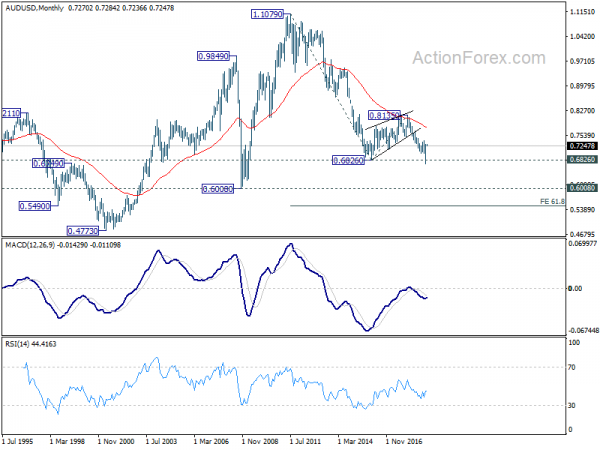