Dollar is back under some pressure in early despite very strong headline NFP number. The problem with the report is that, other parts are rather weak, including revision in prior month’s figure, rise in unemployment rate. More importantly, wage growth is a clear miss. The greenback is extending recent decline against Canadian. And it would probably do so against Euro and Australian too.

US non-farm payroll grew 304k in January, well above expectation of 165k. However, prior month’s figure was revised sharply down from 312k to 222k. Unemployment rate rose to 4.0% versus expectation of 3.8%. But labor force participation rate also rose to 63.2%, up from 63.1%. Wage growth is a clear miss with average hourly earnings rose 0.1% mom versus expectation of 0.3% mom.

Eurozone PMI manufacturing finalized at 50.5, adds to likelihood of recession

Eurozone PMI manufacturing was finalized at 50.5 in January, unrevised, down from December’s 51.4. It’s the six consecutive months of decline and the lowest level since November 2014. Markit noted that “output up marginally, but sharpest fall in new work recorded since April 2013”. Also, “growth sustained via reduction in backlogs and fastest accumulation of stocks in survey history”.

Chris Williamson, Chief Business Economist at IHS Markit said, “the January PMI adds to the likelihood that the manufacturing sector is in recession and will act as a drag on the economy in the first quarter.” “There appears to be a more deep-rooted malaise setting in, which reflects widespread concerns about the destabilising effect of political uncertainty and the damage to exports from rising trade protectionism.”

From Swiss, PMI manufacturing dropped to 54.3 in January, down from 57.8, missed expectation of 56.6. SECO consumer confidence improved to -4, up from -6. Retail sales dropped -0.3% yoy in December versus expectation of 0.4% yoy.

UK PMI manufacturing dropped to 52.8, stocks up on Brexit preparations

UK PMI manufacturing dropped to 52.8 in January, down from 54.2 and missed expectation of 53.5. That’s also a 3-month low. Markit noted that “stocks of purchases rise at survey-record rate”. And, “employment falls for only the second time in past 30 months”.

Rob Dobson, Director at IHS Markit,. said “Stocks of inputs increased at the sharpest pace in the 27-year history, as buying activity was stepped up to mitigate against potential supply-chain disruptions in coming months. There were also signs that inventories of finished goods were being bolstered to ensure warehouses are well stocked to meet ongoing contractual obligations.”

And, “based on its historical relationship against official data, the January survey is consistent with a further solid contraction of production volumes, meaning manufacturing will likely act as a drag on the economy in the first quarter.”

China Caixin PMI manufacturing dropped to 48.3 in January, down from 49.7 and missed expectation of 49.7. That’s the lowest reading since February 2016 and points to continued softening in the health of China’s manufacturing sector. Markit also noted that underlying trend in production weakens. Export sales increase slightly, but overall new work softens. Though, a positive note is that business confidence rose to eight-month high.

Zhengsheng Zhong, Director of Macroeconomic Analysis at CEBM Group said “On the whole, countercyclical economic policy hasn’t had a significant effect. While domestic manufacturing demand shrank, external demand turned positive and became a bright spot amid positive progress in Sino-U.S. trade talks. As companies were more willing to reduce their inventories, their output declined, indicating notable downward pressure on China’s economy. China is likely to launch more fiscal and monetary measures and speed up their implementation. Yet the stance of stabilizing leverage and strict regulation hasn’t changed, which means the weakening trend of China’s economy will continue.”

Japan PMI manufacturing was finalized at 50.3 in January, revised up from 50.0. But that’s still the lowest level in 29 months. And, new export orders decline at sharpest pace since July 2016. Also, business confidence falls for the eighth month running.

Joe Hayes, Economist at IHS Markit said “the data “brought bad news for the global trade cycle at the start of 2019, with new export orders falling at the sharpest rate in two-and-a-half years” And, “domestic markets also showed signs of frailty as total demand declined for the first time since September 2016.”

Also from Japan, jobless rate dropped to 2.4% in December, below expectation of 2.5%. 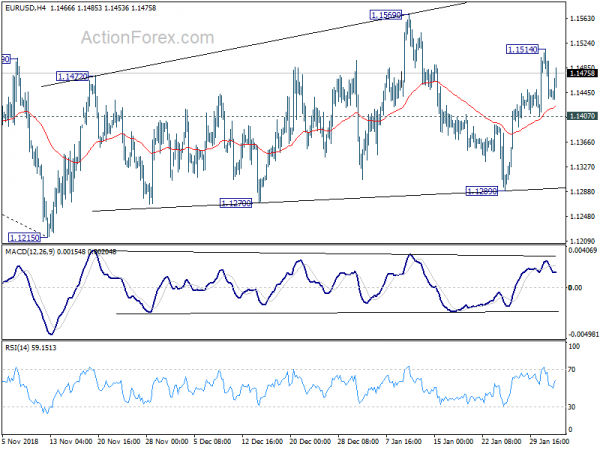 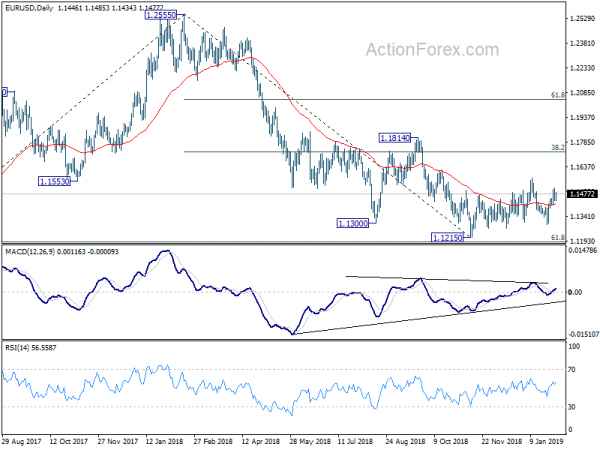