Deal, deal, deals. They’re the main themes in the markets last week. The cross-party Brexit talks in UK collapsed and a high profile Brexiteer is tipped to lead the Brexit process after current Prime Minister steps down. Tensions between US and China escalated further. A trade deal is now rather out of sight, not even a next meeting. While the decision on auto tariffs was postponed, US did confirm auto imports as national security threats. Major exporters like EU and Japan will have six months to make a deal with the US, or we’ll see US-led trade wars escalating further. Nevertheless, the better news was that a deal was agreed between US, Canada and Mexico to eliminate steel and aluminum tariffs.

In the currency markets, Sterling ended as the worst performing one on Brexit uncertainties, and probably increasing chance of a no-deal one. Australian and New Zealand Dollars were the weakest ones on risk aversion, and poor economic performance in China. Swiss Franc, Dollar and Yen were the strongest ones on risk aversion and falling global treasury yields. Also, it should be noted that Chinese Yuan tumbled sharply with USD/CNH eyeing the important psychological level of 7.0.

US, Canada and Mexico – Steel tariffs and USMCA

With the most important hurdle cleared, the three countries could see the USMCA ratified by respective parliament rather quickly.

US, EU and Japan – Auto tariffs

It’s true that Trump annonced to delay decisions on auto tariffs by 180 days. But the most important point of the announcement is that auto imports are delcared as threat to national security of US. Their rationale is that the countries’ defense and military superiority depend on the competitiveness and R&D of its automobile industry.

Competitiveness of US-owned auto companies waned in the past decades, with domestic market share dropped from 67% in 1985 to 22% in 2017. ALso, global market share dropped fom 36% in 1995 to 12% in 2017. Defense purchases alone are not sufficient to support R&D in key automotive technologies. Ann they claimed that “domestic conditions of competition must be improved by reducing imports.”

Later, Trump also repeated his accusation of EU as treating the US “worse than China, they’re just smaller”. Nevermind that there was no explanation on how EU is worse comparing to China’s IP theft, forced technolgy transfer, or unfair competition with state-owned enterprises. Still, the message is clear, a delay is only a delay. Auto tariffs threats remain there and EU’s retaliations are ready (probably Japan too). Of course, until deals are made.

US and China – Full-blown trade war

On the US side, the latest round of 25% ofon US 200B of tariffs took effect on May 10 already. Public comments on new tariffs on USD 300B in Chinese products (essentially all remaining) started with hearing scheduled on June 17. US also announced double assault on China’s telecom Giant Huawei.

Firstly, the U.S. Commerce Department is adding Huawei and 70 affiliates to its “entity List” that bans them from buying US technologies without government approval. Secondly, Trump signed an executive order banning US companies from using telecom equipment made by companies deemed to pose a national security risk. Simply speaking, the decision was to prevent American technology from being used by foreign-owned entities in ways that potentially undermine U.S. national security or foreign policy interests.

On China’s side, retaliation of new round of US tarrifs were announced, effective June 1. It’s widely reported that China is not keen to resume negotiations, unless three core issues are resolved. They include elimination of all tariffs upon an agreemnt, amount on additional purchases as part of the deal, the the “balance” of the text of the deal itself. China saw the requests regarding legislations as intrusion of its soverignity and dignity.

China side negotiations haven’t broken down. Trump said he’s going to mee Xi soon. But at this point, there is no scheduled meeting between the two delegations announced. And it’s even unsure if anything would be done before G20 summit in Japan in June.

The cross-party Brexit talks in UK collapsed after opposition Labour leader Jeremy Corbyn declared that talks ad “gone as far as they can” due to increasing weakness and instability of the Conservative government. He also declared that Labour will oppose May’s Brexit deal when it returns to the parliament early June.

Prime Minister Theresa May promised to agree to a timetable for stepping down after another vote for the Brexit Withdrawal Agreement on June 3, regardless of the result. Boris Johnson, a high profile Brexiteer whoe prefers no-deal Brexit to the current deal, is currently the favorite  among party members  to replace May.

Market pricing in 73.4% chance of Fed rate cut by December

Before going into some charts, we’d like to point out that according to Fed fund futures, markets are now pricing in 73.4% chance of a Fed cut by December FOMC meeting. That’s higher than around 63.5% a week ago, and way higher than around 40% chance a month ago.

DXY on track to extend medium term up trend

But Dollar Index actually ended higher even though markets are increase bets on Fed cut. Upside momentum in DXY hasn’t been too convincing. Nevertheless, strong support from 55 day EMA was a bullish sign. From medium term point of view, outlook stays bullish with 95.74 support firmly intact. DXY is on track to 78.6% retracement of 103.82 to 88.25 at 100.48.

Stocks apparently received little support from Fed cut speculations. DOW dropped to as low as 25568.06 last week then recovered. Though, upside was limited by flat 55 day EMA so far and more downside is still expected to 38.2% retracement of 21712.53 to 26695.96 at 24792.28 at least. We’re still seeing fall from 26696.96 as the third leg of consolidation pattern from 26951.81. Sustained break of 24792.28 will affirm our bearish view. Meanwhile, the main risks to this view is the lack of confirmation from S&P 500 and NASDAQ so far. But have indeed rebounded to close above 55 EMAs. It will probably take a while for the three indices to sort themselves out.

With 3-month yield at 2.389, the 3-month-10-year yield curve should eventaully inverts persistently, unless Fed cuts interest rates. That would be inline with sharp slowdown in the US economy ahead, even withou recession. Stocks selling should finally pickup momentum to align with such development. In such case, there will be spillover to other economies, in particular emerging markets, which could be affected by China too. And global risk aversion will help lift Dollar. We’ll see if that’s how things develop in the months ahead. 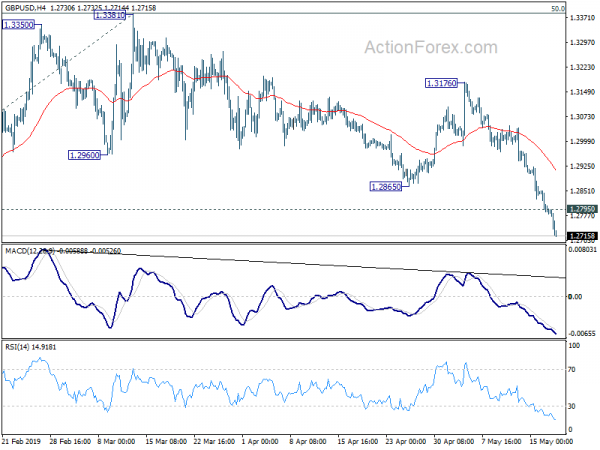 In the bigger picture, current development suggests that medium term decline from 1.4376 (2018 high) is not completed, and is possibly ready to resume. Decisive break of 1.2391 would target a test on 1.1946 long term bottom (2016 low). For now, we don’t expect a firm break there yet. Hence focus will be on bottoming signal as it approaches 1.1946. In any case, medium term outlook will stay bearish as long as 1.3381 resistance holds, in case of rebound. 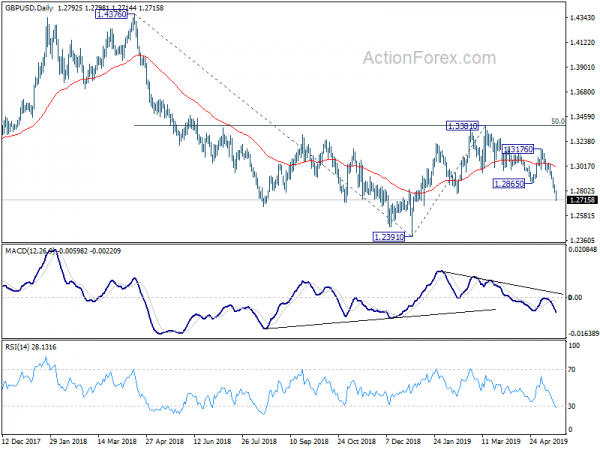 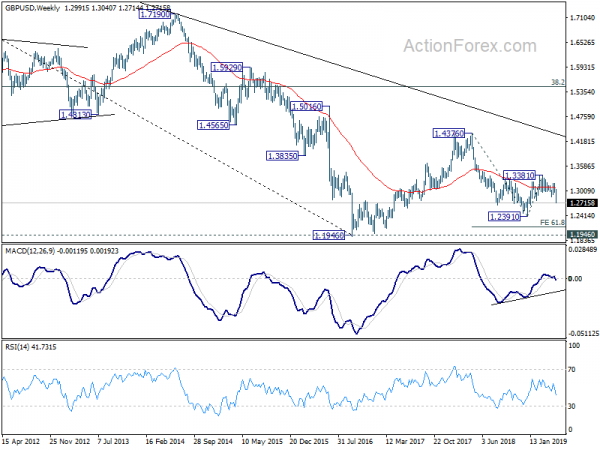 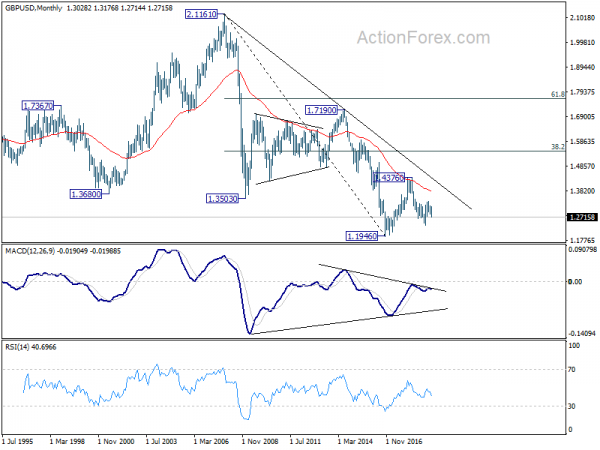