Major global central bankers sang a chorus of dovishness last week. Most importantly, both ECB and Fed signaled the possibility of rate cuts ahead. Comparatively, RBA’s indication of more rate cut was not much a surprise. In the background, it appeared US and China were back on track to restart trade negotiations. Hope of more monetary easing and trade optimism lifted S&P 500 to record intraday high. On the other hand, treasury yields tumbled with US 10-year yield breaching 2% handle while German 10-year yield hit record low. Gold surged on Dollar’s selloff and breached 1400 handle. WTI crude oil extended recent rebound and closed above 57 on middle east tensions.

Dollar ended the week as the worst performing currency, followed by Australian Dollar, on expectations of rate cuts by respective central banks. Yen ended as the third weakest, reacting more to rising stocks than falling yields. Swiss Franc was the strongest one, on geopolitical tension safe haven flow, followed by Kiwi. Surprisingly, Euro was the third strongest as markets pushed back rate cut expectations after Eurozone PMI data. It’s not impossible for Dollar to stage similar comeback if there would be some positive developments.

ECB President Mario Draghi said in the Sintra forum in Portugal that risks to outlook remained “tilted to the downside” and indicators pointed to “lingering softness”. And he warned, “in the absence of improvement, such that the sustained return of inflation to our aim is threatened, additional stimulus will be required.” The options on further measures were already “raised and discussed” at ECB’s last meting.

“In the absence of improvement” was seen as a rather low bar for action. And markets quickly started to price in rate cut by ECB in July. Germany 10-year yield tumbled to record low at -0.326. Euro was sold off broadly and even drew Trump’s criticism on ECB and Draghi. It’s unsure if there was any direct relationship to the events. But within hours, Trump announced he’s called Chinese President Xi Jinping to set up an “extended meeting” at G20 in Osaka on June 28-29.

However, Euro then staged a strong rebound after dovish Fed. Rally in Euro gained further momentum on Friday after PMIs showed no further deteriorations in the economy. Indeed, Euro ended the week up against all but Swiss Franc and New Zealand Dollar. EUR/USD made a clear break of 1.1347 resistance to resume recent rebound. German 10-year yield also pared back much of the decline to close at -0.282.

As of now, there’s speculation that ECB could have a -10bps cut in all main policy rates in September meeting. That could bring the main refinancing rate into negative territory for the first time. If economic outlook doesn’t improve ahead, ECB could have another rate cut of -10bps by year end, with possibility of new round of QE. However, as the reactions to PMIs showed, expectations could drastically turn with just a few pieces of data. The upcoming June Eurozone CPI flash on Friday could flip market expectations again.

FOMC rate decisions last week were clearly dovish without a doubt. Fed funds futures are now pricing in 100% chance of a rate cut in July, with 32.3% chance of -50bps cut. That was, to us, too exaggerated given that the baseline outlook in the new economic projections was not that bad. Also, huge uncertainties of trade negotiations with China lie ahead.

If the negotiations between Trump and Xi break down in the coming week, and tariffs on all the rest Chinese imports are imposed soon, then Fed has every reason to cut interest rates in July to cushion the impacts. But now, it looks like US and China are ready to enter into a new phase of trade negotiations. It’s highly doubtful on whether any FOMC members would change their current stance less than a month away.

Remember that while seven members expect -50bps cut by the end of the year, the dot plot doesn’t show the timing. It’s unsure why traders believe that July is the month to start rate cut, rather than September. To us, chance of a July cut is far from what fed fund futures imply. The coming two weeks are crucial. Trump-Xi summit at G20 is an important event. Then, we’ll have ISM indices and non-farm payroll two weeks from now. This set of data could overturn interest rate expectations, much like what Eurozone PMIs did.

Dollar index to stay pressured in near term

In any case, Dollar index’s break of 96.45 support indicates resumption of fall from 98.37. More importantly, it revived the case of medium term topping at 98.37. We’d not too confidence on this bearish case yet as DXY is holding above 55 week and 55 month EMA. Though, further fall is in favor now to 38.2% retracement of 88.25 to 98.37 at 94.50. Reactions from there should reveal whether DXY is in correction to up trend, or has reversed medium term trend. 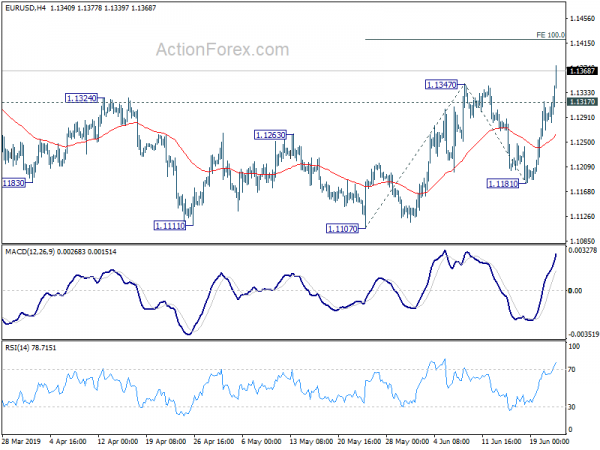 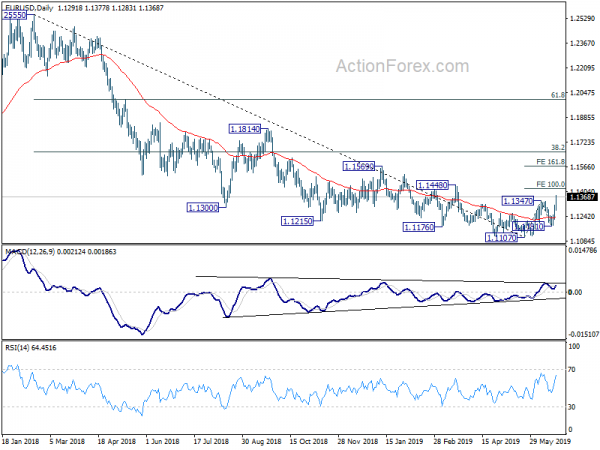 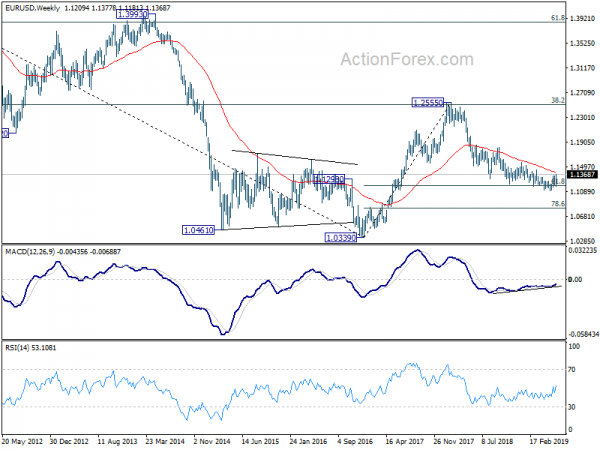 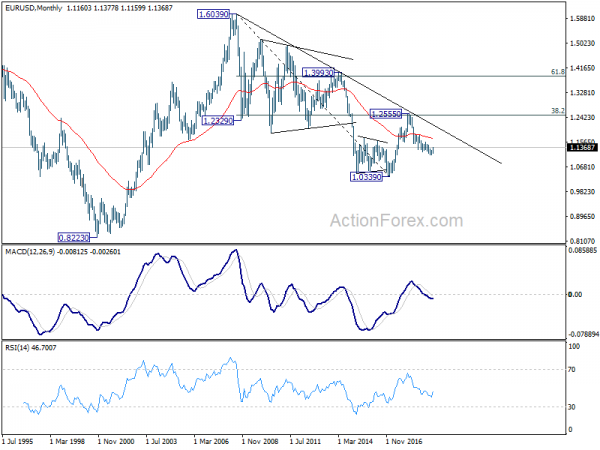