Expectations setting were rather well set for the highly anticipated Trump-Xi meeting at G20. Both sides agreed to stop raising tariffs further. But it’s unsure whether they’ve closed the huge gap that led to collapse in trade negotiations. If the causes remain, the results would be the same no matter how long the talks will continue. But anyway the results should keep investors happy for now and we’d likely see a lift in sentiments as the week starts.

In the currency markets, commodity currencies already jumped the gun last week, lead by New Zealand, then Australian and Canadian Dollar. However, Aussie will be facing risks of RBA rate cut as well as Chinese data this week. Economic data from Canada affirmed BoC’s neutral stance. But WTI crude oil appears to have topped at 59.84 after failing 60 handle. Pull back in oil price could be a drag on the Loonie this week.

On the other hand, Yen was the weakest one last week, followed by Sterling and then Swiss Franc. Dollar was mixed as it pared some losses after Fed officials talked down the chance of aggressive 50bps cut. While markets are pricing in 100% chance of a Fed cut in July, we’d maintain that the meeting is still live. At least, the upcoming data of ISM indices and non-farm payroll would need to show some more deterioration in the economy to seal the dovish case. Otherwise, we might see Dollar forming a bas for sustainable rebound.

Trump-Xi meeting: No new tariffs, China to buy US farm products, US to sell tech to Huawei

US and China agreed to stop further escalation of trade war for the time being, after 80 meeting between Trump and Xi Jinping, as sideline of G20 summit in Japan. Trade negotiations will resume while China agreed to purchase additional US agricultural products. Meanwhile, the ban of supply to Chinese telecom giant would be lifted partially as part of the agreement.

Trump described the meeting as “excellent, as good as it was going to be” and declared that “we’re back on track”. He added, “we will continue to negotiate, and I promise that at least for the time being we won’t be adding additional [tariffs]”. Also, “China will consult with us and will be buying a tremendous amount of food and agricultural products, and they’re going to start doing that almost immediately,” Trump said.

Regarding the issue of Huawei, Trump said “we’ll have to save that until the very end” of the trade talks. However, “one of the things I will allow, however, is… we will keep selling that product.” And, “US companies can sell their equipment to Huawei,” Trump said, but “we’re talking about equipment where there’s no great national security problem with it.”

But so far, nothing substantial was mentioned regarding the core issues of intellectual property theft, forced technology transfer and market distortion by large subsidies to state-owned enterprises. It’s unsure if Trump was already happy with more Chinese purchases. Or he’s completely forgotten what are the most important issues.

On the Chinese side, state-run Xinhua described the meeting result as both presidents agreeing “to restart trade consultations between their countries on the basis of equality and mutual respect.”

In response to the news, IMF Managing Director Christine Lagarde warned: “While the resumption of trade talks between the United States and China is welcome, tariffs already implemented are holding back the global economy, and unresolved issues carry a great deal of uncertainty about the future”.

G20 leaders ended the summit in Japan pledging to realize a free and fair trade and investment environment. But they stopped short of denouncing protectionism. Though, the group still agreed on continuing with WTO reform while acknowledging the complementary roles of bilateral and free trade agreements.

In the joint communique, the group said “we strive to realize a free, fair, non-discriminatory, transparent, predictable and stable trade and investment environment, and to keep our markets open”. And they “reaffirm our support for the necessary reform of the World Trade Organization (WTO) to improve its functions”. Actions are needed on the “functioning of the dispute settlement system”. Also, “we recognize the complementary roles of bilateral and regional free trade agreements that are WTO-consistent. We will work to ensure a level playing field to foster an enabling business environment.”

Now that G20 risk is past, focus will turn immediately to US economic data this week, including ISM indices and non-farm payrolls. Currently, fed fund futures are still pricing in 100% of a Fed rate cut in July, 71.9% chance of 25bps cut, 28.1% chance of 50bps. The pricings were not much changed from prior week’s. We’d maintain that such expectations are “over”.

Even the most dovish Fed official, St. Louis Fed President James Bullard, called for a 25bps cut in July only. He said last week, “just sitting here today I think 50 basis points would be overdone”. And, “I don’t think the situation really calls for that but I would be willing to go to 25. Fed chair Jerome Powell also emphasized “we are also mindful that monetary policy should not overreact to any individual data point or short-term swing in sentiment. Doing so would risk adding even more uncertainty to the outlook.”

Dollar index at a juncture, next move to be decided soon

USD/JPY edged lower to 106.78 last week but recovered since then. Initial bias remains neutral this week first. As long as 108.80 resistance holds, further decline is in favor. Break of 106.78 will resume the fall from 112.40 to retest 104.69 low. On the upside, however, considering bullish convergence condition in 4 hour MACD, break of 108.80 will confirm short term bottoming. Intraday bias will be turned back to the upside for 110.67 resistance next. 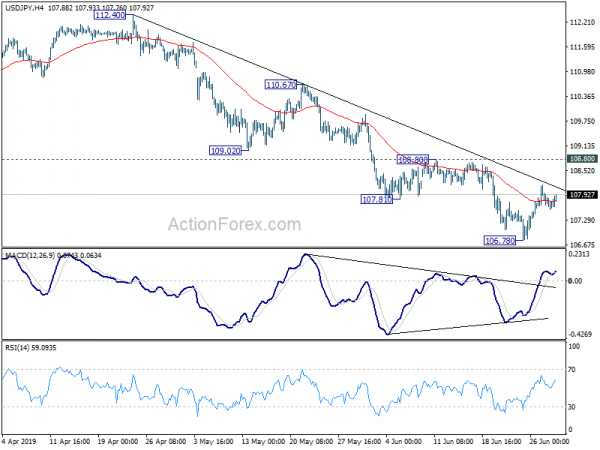 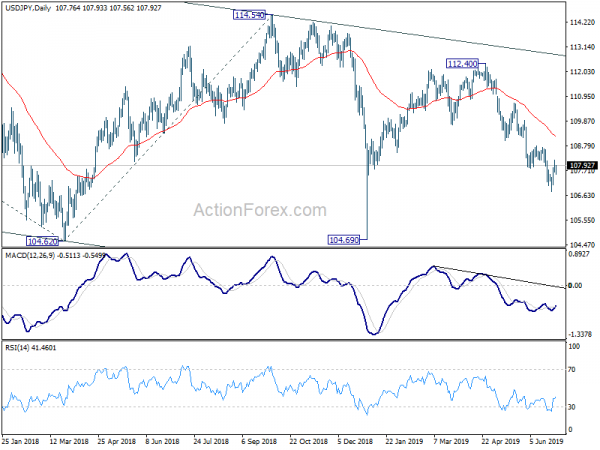 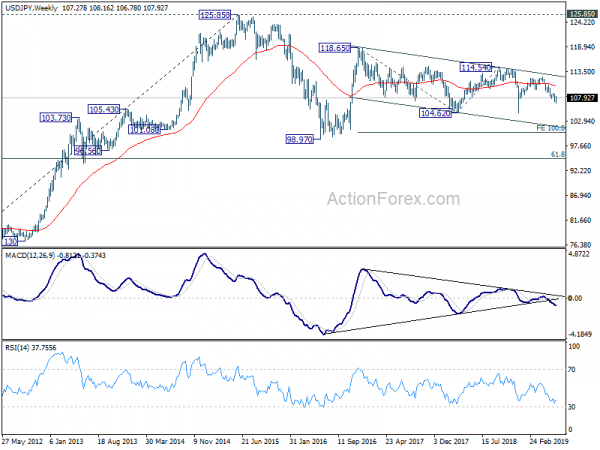 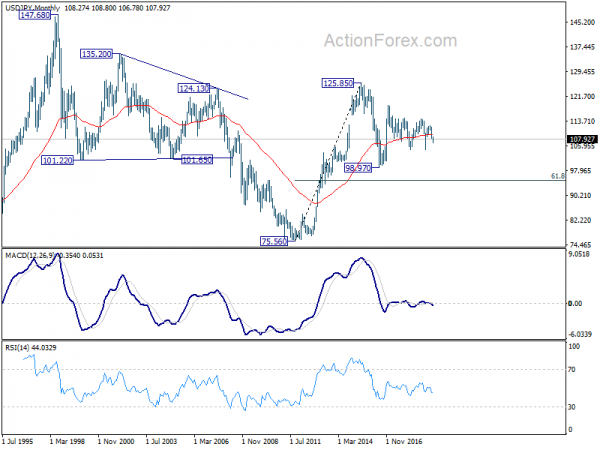 USD/JPY Pair Started A Steady Increase Above The 105.00 Resistance