Sterling Might Bottom While Euro Would Stay Pressured, Dollar Indecisive

Sterling, Dollar and Euro were the major focuses last week as they took turn in suffering selloffs. The Pound was pressured by increasing worries over no-deal Brexit. While it ended the week as the weakest one, late recovery argues that the worst could be past for Sterling for the near term. Similarly, Dollar ignored solid economic data and declined on Fed cut expectations. But then, there was no follow through selling towards the end of the week. Late fall in Euro, on the other hand, suggested that more downside is in favor in the common currency for this week.

In other markets, US stocks seemed to have topped out in near term with DOW, S&P 500 and NASDAQ pulling back from historical highs. FTSE and CAC stayed in familiar range while DAX gyrated slightly lower. Nikkei ended slightly lower after a roller coaster ride. Gold broke out of range to high as high 1452.94 but pulled back into range at close. WTI crude oil’s pull back from 60.93 was deeper than expected and looks heading back to 50 handle.

Sterling was sold off initially on increasing worry over no-deal Brexit. According to a Reuters July 15-18 poll, the median forecasts of no-deal Brexit happening was 30%, up from 25% in June and 15% in May. That’s also the highest number since October 2017. Boris Johnson would likely win the Conservative leadership race and become the next Prime Minister. The results of the ballot of 160k Conservative members would be announced this week, on July 23.

On the other hand, the Pound staged a notable rebound as boosted some some solid economic data. Economic data from the UK released last week weren’t bad at all. Retail sales were surprisingly strong in June. CPI was steady at 2.0% yoy in June with core CPI picked up to 1.8% yoy. Unemployment rate head steady at 3.8% in May while wage growth accelerated notably.

Technically, Sterling remains bearish against Dollar, Euro and Yen. But downside momentum has been clearly diminishing as seen in 4 hour MACDs. In particular, GBP/USD has just recovered off 1.2391 support (January low). EUR/GBP is also reasonably close to 0.9101 key resistance. Thus, there is prospect of a stronger rebound in the Pound for the near term. 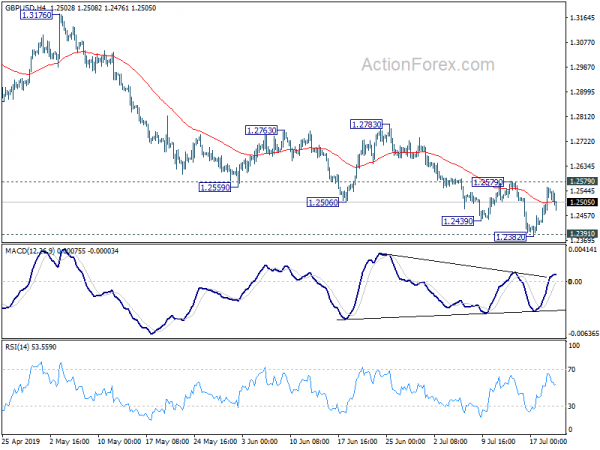 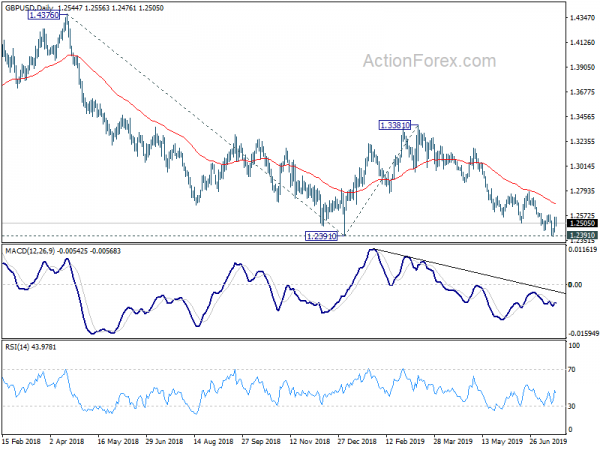 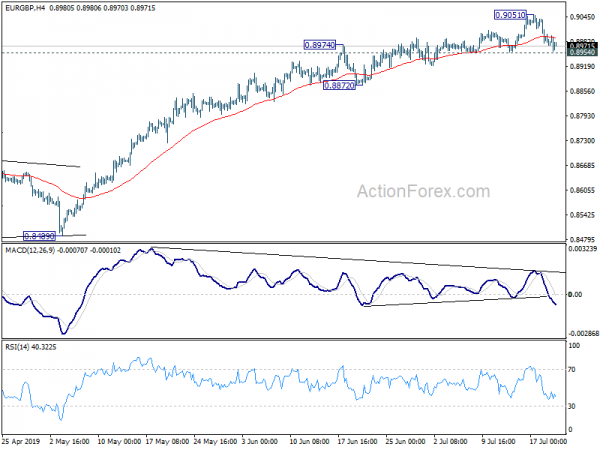 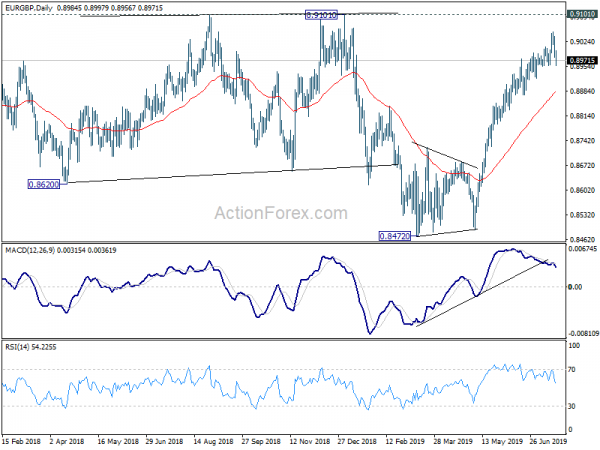 Expectation on ECB monetary easing was a major factor in Euro’s weakness. More importantly, the common currency was sold off on news that ECB is considering changes to its inflation target. Currently, the inflation goal is set at “below, but close to, 2%”. Effectively, 2% is more of a “ceiling” rather than a mid-point of a target range, like those of other major global central banks. It’s rumored that the board is considering to change the target to a symmetrical one around the 2% level. That is, inflation would be allowed to overshoot 2%. With such change, interest rate would then be allowed to stay low for longer, to encourage higher inflation.

ECB will meet this week and probably stand pat week first. The central bank could save the policy actions for September, when new economic projections are scheduled to publish. The question of changing inflation goal will definitely be a focus in the post meeting conference. 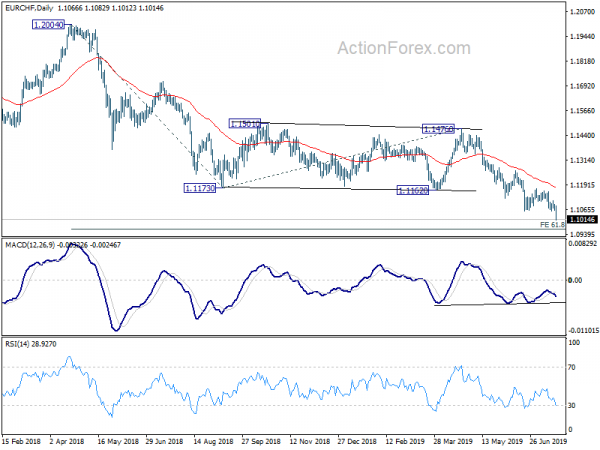 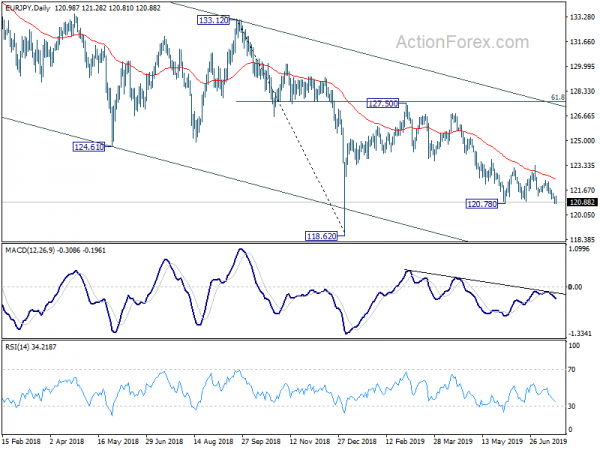 Fed policymakers’ question changing from “why cut” to “why not”

The most market moving comments last week were from New York Fed John Williams and Vice Chair Richard Clarida. Williams said in a speech that policymakers shouldn’t keep powder dry and they should “move more quickly to add monetary stimulus” to “vaccinate against further ills”. Though, in a rare step, New York Fed came out to clarified that Williams’s comment was “academic” and “not about potential policy actions at the upcoming FOMC meeting.” Still, Clarida’s comments couldn’t be ignored as he said “you don’t want to wait until data turns decisively if you can afford to.”

Now, “risk management” seemed to be the key in upcoming FOMC rate decision than actual data. We’ll still have Q2 GDP and PCE inflation before July 30-31 meeting. But such data are unlikely to give a drastic halt to the doves. The questions could be changed from “why cut” to “why not”. Rosengren warned against “insurance” cut as itself poses  risks by raising asset prices and adding to worries over financial stability. But it’s unsure how many of his fellow policymakers share the same view.

Dollar index gyrated around 55 day EMA last week and outlook is unchanged. Recent development suggests that corrective pattern from 98.37 is not finished yet. And more medium term range trading could be seen. It’s rather hard to predict the path inside the pattern. But in case of another fall, 55 week EMA (now at 96.25) will be first line of defense. Sustained break there, though, will bring deeper fall to 38.2% retracement of 88.25 to 98.37 at 94.50.

EUR/GBP edged higher to 0.9051 last week but retreated sharply since then. Initial bias remains neutral this week first. With 0.8954 minor support intact, further rise cannot be ruled out. But upside momentum is clearly diminishing as seen in 4 hour and daily MACD. Upside should be limited by 0.9101 key resistance to bring reversal. On the downside, break of 0.8954 support should confirm short term topping. In this case, deeper pull back could be seen to 55 day EMA (now at 0.8882) first. 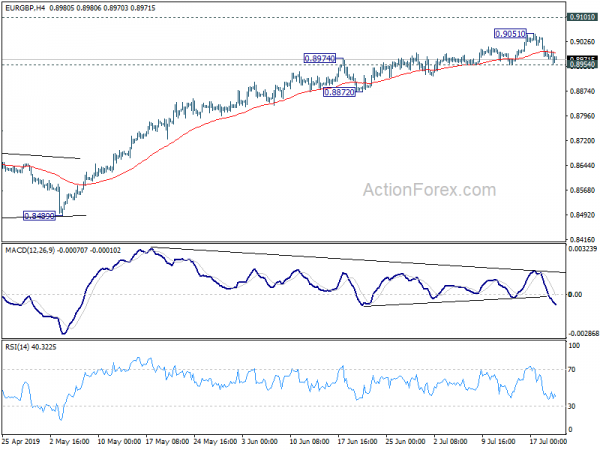 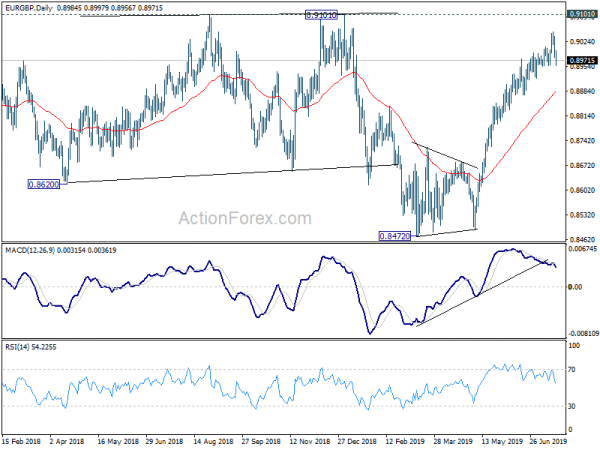 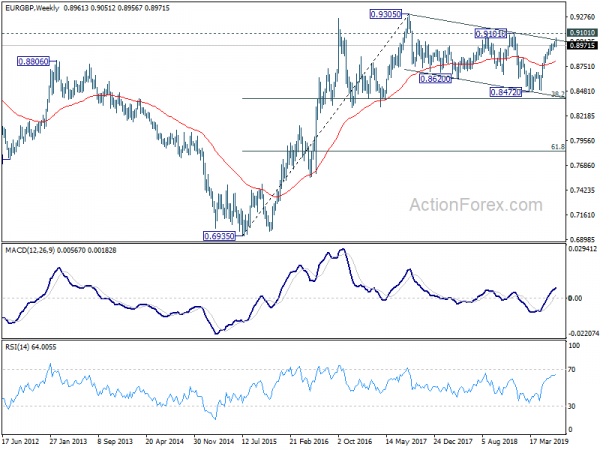 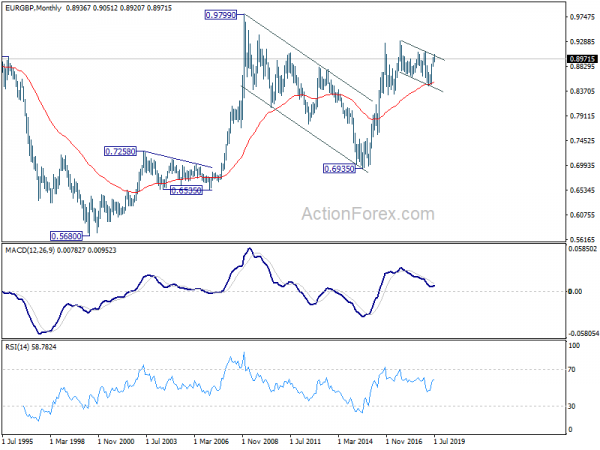