Euro ended last week as the weakest one as comments from a top ECB official suggested a forceful easing package to be announced in September. Additionally recession fear in Germany sent 10-year bund yield to new record low. New Zealand Dollar followed as the second weakest on dovish RBNZ expectations. The overbought Yen was the third weakest despite falling yields as it was consolidating recent gains. On the other hand, Sterling was the strongest last week, paring some of recent losses, awaiting the next move regarding Brexit. Dollar followed as the second strongest, mainly because of weakness elsewhere.

The upcoming week could be crucial for the greenback as focus will turn to Fed Chair Jerome Powell’s Jackson Hole speech, and FOMC minutes. Euro, will also look into ECB policy accounts and PMIs. These events could decide whether EUR/USD would extend medium term down trend through 1.1026 low. Such a development could drag down the Euro elsewhere, or push up the greenback broadly, or both.

The decline in German yield and Euro was triggered by dovish comments from ECB Governing Council member Olli Rehn. In short, Rehn said weakening of Europe’s economic outlook justified further action in monetary policy, “as we intend to do in September”. And most importantly, he said “it’s important that we come up with a significant and impactful policy package”, “when you’re working with financial markets, it’s often better to overshoot than undershoot, and better to have a very strong package of policy measures than to tinker.”

The upcoming release of ECB monetary policy accounts could shed some lights of what “package” policy makers were considering. Currently, markets are expecting -10bps cut to the key interest rate from current -0.4%. Also, ECB could restart asset purchase program with fresh EUR 50B per month buying. Meanwhile Eurozone PMIs would likely reinforce the need to more policy stimulus.

US equities took a roller-coaster ride last week on developments in US-China trade tensions. US announced to delay 10% tariffs of roughly 50-60% of the USD 300B in Chinese imports until December 15. Such move was well received by the markets. Conversations between the two sides were continuing and a meeting is still expected in Washington in September.

But President Donald Trump appeared to have put human rights conditions in Hong Kong as a precondition in any trade deal with China. He also got backing from the Congress, as there was bipartisan agreement to expedite the Hong Kong Human Rights and Democracy Act, which could lead to sanctions of some high profile Chinese and Hong Kong officials. The political development in Hong Kong in the upcoming week is more crucial than ever on US-China relations.

Futures pricing in 100% of September Fed cut ahead of Jacksonhole

For now, Fed fund futures are pricing in 100% chance of at least another FOMC rate cut on September 18. Fed Chair Jerome Powell will again have a chance to set the expectations, at the annual Jackson Hole Economic Symposium. Before that, Fed will release July meetings, which should shed more lights on the debates that lead to the insurance rate cut. From both events, we should know how likely is Fed to deliver another cut next month.

Dollar index staying in up trend after recent volatility

Dollar index drew strong support from 55 day EMA and rebounded strongly last week, along with selloff in EUR/USD. While upside momentum has been unconvincing, the up trend in DXY remains intact. Another high above 98.93 is still expected. Though, a break of 97.03 support will be an early sign of medium term topping and turn focus back to 95.83. The upcoming week, with the above mentioned events in Eurozone and US, will be crucial. Break of 1.1026 low in EUR/USD should at least solidify Dollar index’s near term bullishness.

EUR/USD’s sharp decline last week suggests that rebound from 1.1026 has completed at 1.1249, after failing to sustain above 55 day EMA (now at 1.1202). Initial bias stays on the downside this week for retesting 1.1026 low first. Decisive break there will extend the downtrend from 1.2555. On the downside, above 1.1130 minor resistance will turn intraday bias back to the upside to extend the corrective. But in that case, we’d expect strong resistance from 1.1282 to limit upside. 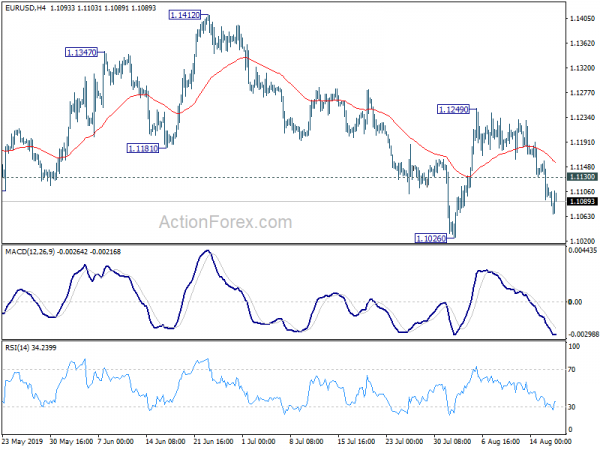 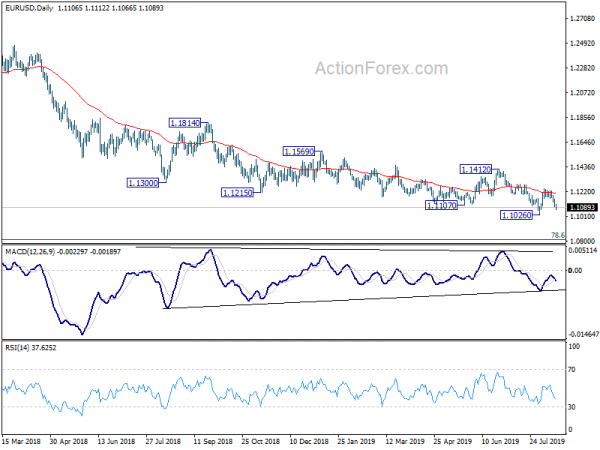 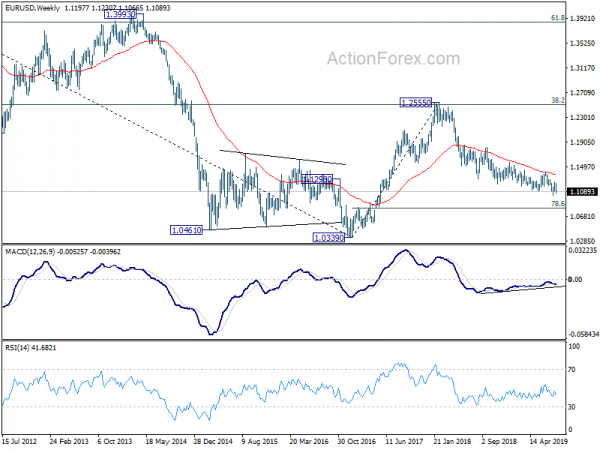 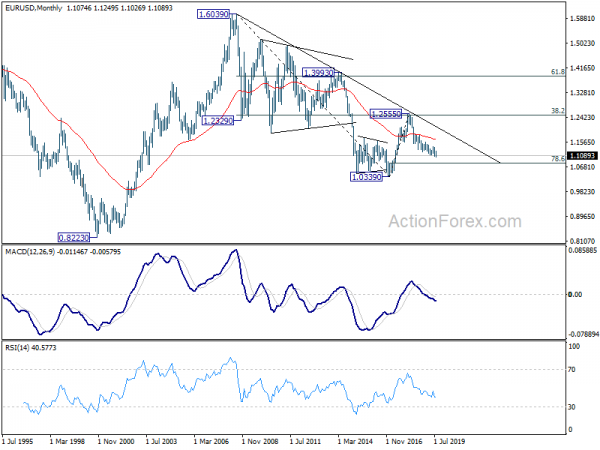