Sterling, Canadian Dollar and Euro surged broadly last week on hawkish comments from central bankers. The turn in BoE Governor Mark Carney was the most drastic as just a week a go, he said it’s not the time of rate hike yet. But then, he indciated the BoE MPC will start debating raising interest rate in the coming months. BoC Governor Stephen Poloz repeated his comments that prior rate cuts in 2015 have already done their job. But this time, Poloz hinted that BoC is approaching a new interest rate decision. That tremendously raised the odds of a July hike by BoC. There were some jitters on Euro on report that markets misinterpreted ECB President Mario Draghi’s comments. But after all, it’s generally convinced that, with improvements in Eurozone inflation and growth, ECB is transiting into a phase of stimulus withdrawal. And there would likely be tapering announcement in September or by latest October.

On the other hand, Yen ended the week as the weakest one as BoJ is generally expected to maintain its stimulus as inflation at 0.4% yoy is still far off it’s 2% target. Also, global bond yields jumped sharply, giving additional pressure to the Yen. Dollar followed as the second weakest one as markets continued to doubt if Fed, or the US economy, is ready for another rate hike in September. In particular, investors are very dissatisifed with the pace of US President Donald Trump’s work on pushing through his economic policies. Trump’s administration is still stuck with healthcare reform for the moment. And the US President himeself is continuously engaging in things that distract him from working on the economy. IMF’s downgrade of US economic forecast, citing the removal of assumed fiscal stimulus, is a clear sign that economists are giving up.

One of the developments in the financial markets caught most of our attention. That is the decoupling of Yen and stocks. Global equities tumbled sharply on expectation of monetary policy tightening ahead. But this time, there was no risk aversion boost to the Yen seen, nor on Swiss Franc. This could be a sign that widening yield spread and their attraction on carry trades is finally back after the years. And yield spread could be starting to have a much stronger impact on the Yen than risk sentiments.

For example, the near term outlook in DAX is certainly quite bad. The sharp fall in DAX last week dragged weekly MACD further below signal line and suggests medium term top was already formed at 12951.54. While some recovery might be seen, the index could now be heading back to key near term fiboaccci level at 38.2% retracement of 10174.92 to 12951.54 at 11890.87, which is close to medium term channel support. Reactions from there will be crucial to whether the medium term up trend is still intact. For the moment, we’re not medium term bearish in DAX yet. But bearish divergence in weekly MACD does give us something to worry about.

We’ve pointed out the risk of trend reversal in FTSE too and it did tumbled sharply. Nonetheless, it was driven by the surge in Sterling and policy tightening, which was out of our expectations. Overall, we maintain the view that 7598.99 could be the medium term top already, after completing a rising wedge structure, on bearish divergence condition in daily MACD. Looking at the bigger picture, bearish divergence condition is also see in weekly MACD. And more improtantly, the index had jsut failed to break through long term channel resistance firmly. It would now gyrate back to 7093.56 important level where some strong support could be seen. While it’s still early to judge, firm break of 7093.56 and 55 week EMA (now at 7079.42) could indciate that start of a medium term down trend back to lower channel support below 6000 handle.

Staying in the US, 10 year yield’s strong rebound last week suggests that medium term correction from 2.621 has completed at 2.103. That was after drawing support from 38.2% retracemnent of 1.336 to 2.621 at 2.130 and 55 week EMA. Near term focus is now back on 2.423 resitsance. Break there will bring retest of 2.621 high. However, we’d like to point out that rebound in TNX was mainly driven by surging global yields, not by Fed rate expectations. This is reflected in the lack of strength in Dollar last week. So, not until Fed is more certain on its rate path, 2.621 will likely cap upside in TNX. And that would be accompanied by the lack of persistent strength in Dollar’s rebound.

Regarding trading strategy, we are short in USD/CAD (sold at 1.3510). Target of 1.2968 key cluster support was already met. A rebound could be due on deep oversold condition in daily RSI. Nonetheless, the Canadian Dollar seems to be getting extra support from the rebound in oil price. WTI crude oil closed at 46.04, comparing to prior week’s low at 42.05. In the very near term, it looks like there is more upside potential in oil which might squeeze a bit more from USD/CAD. Hence, we’ll stay short in USD/CAD but lower the stop to very tight level at 1.3010 and see if we can get an extra 100 or 200 pips out of it. But still, we maintain that fall from 1.3793 is resuming the whole decline from 1.4689 and should take out 1.2460 low eventually. Hence, even if the position is stopped, we’ll look for sellling opportunity again, but at a later stage.

We’re also long in EUR/GBP (bought at 0.8740, stop at 0.8640). It looked like EUR/GBP was finally taking out 0.8851 resitasnce to 0.9304 high following ECB Draghi inpsired up move. But then , thanks to BoE Carney, EUR/GBP settled back into establised range. The bullish case for EUR/GBP, ECB and BoE divergence, no longer exists and the risk of reversal after failing 0.8851 is increasing. We’ll close the position at market this week.

Meanwhile, we’ll look at Yen short oppuntinies this week as we believe the theme of widening yield spread on monetary stimulus exit and return of carry trade will continue. In addition, there could be additional boost to the Yen if global stocks are not as beraish as we thought. Looking at what to buy against Yen, we’ll firstly avoid Dollar. At this point, we’re staying bullish in EUR/AUD and expecting the rise from 1.4625 to extend to 1.5226. AUD/CAD also breached 0.9923 support last week and looks set to head lower. Hence, we’ll avoid Aussie. CAD/JPY looks like a good candidiate with EUR/CAD also displaying a tendence to extend the fall from 1.5257. But since we already have a CAD position, we’d prefer not to add more bet on it.

Comparing EUR/JPY and GBP/JPY, the former is clearly the more bullish one as 124.08 resistance was taken out early this year. GBP/JPY struggled below equivalent resistance at 148.42. In most circumstances, EUR/JPY is preferred to GBP/JPY. However, firstly, Sterling was lifted by quite a drasitic turn in BoE Carney’s stance which changed the fundamental outlook. Secondly, as mentioned above, there is chance of a near term reversal in EUR/GBP after being rejected from 0.8851. Hence, we’d choose to buy GBP/JPY this week for a catch up. We’ll buy GBP/JPY on dip to 144.00 with stop at 142.50. We’re expectin the whole rise from 2016 low at 122.36 to resume as a medium term move after taking out 148.42 resistance later.

GBP/JPY’s sharp rise last week confirmed that pull back from 148.09 has completed at 138.65 already. With a temporary top in place at 146.52, intraday bias is neutral this week first for consolidation. But downside of retreat should be contained by 143.25 minor support and bring rally resumption. Above 146.52 will turn bias to the upside to retest 148.09/42 resistance zone. Decisive break there will extend whole rally from 122.36 to long term fibonacci level at 150.43 next. 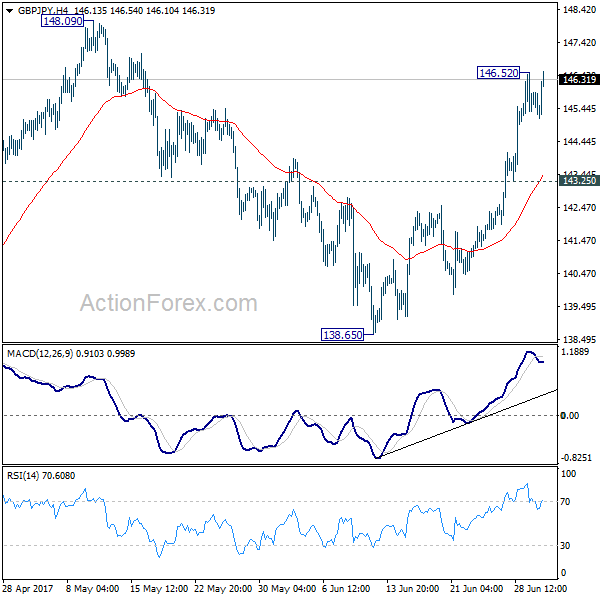 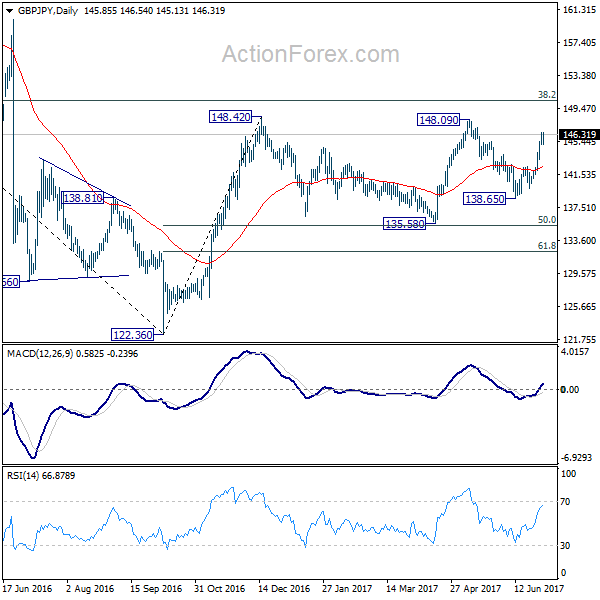 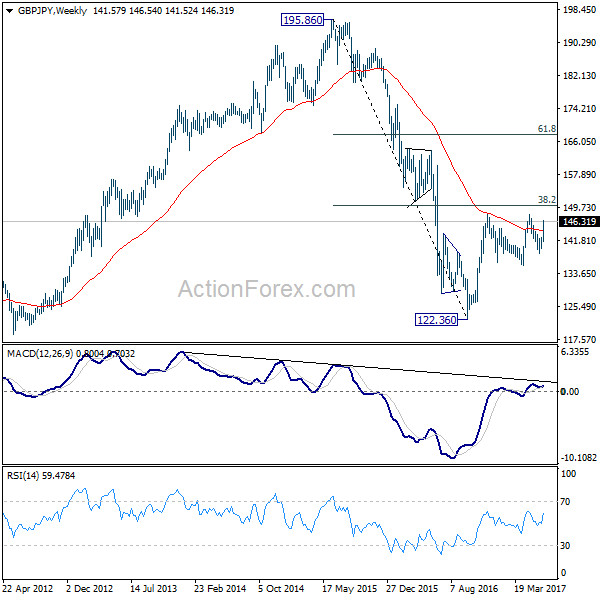 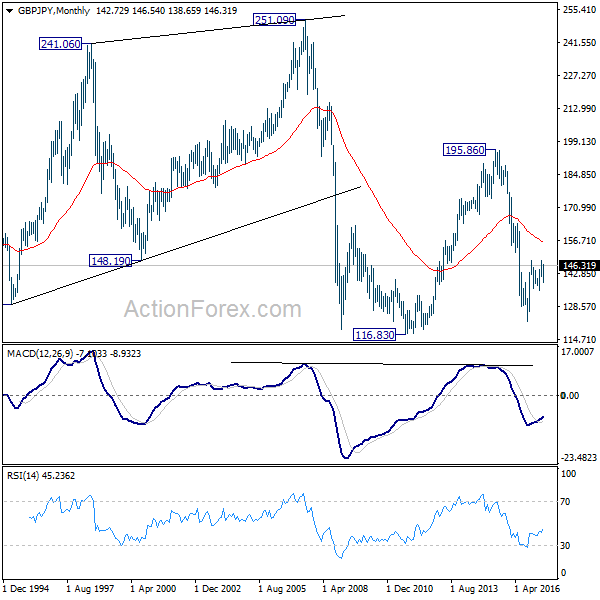