Central bank comments and rate expectations continued to be the main drivers in the global financial markets last week. However, the developments reminded us that no matter how hawkish central bankers sound, monetary policies have to be supported by data. Canadian Dollar being an example that BoC Governor Stephen Poloz’s hawkish comments were supported by strong employment data. And the Loonie ended as the strongest major currency as markets are generally expecting a BoC rate hike on July 12 this week. Dollar ended as the second strongest one after solid ISM indices and non-farm payroll headline number even though markets are not convinced of a September Fed hike. Meanwhile, Euro was the third strongest as markets perceived the ECB monetary policy meeting accounts as a hawkish one.

On the other hand, Yen tumbled across the board as central bank expectations pushed global bond yields sharply higher. Sterling ended as the second weakest one after a string of weaker than expected economic data raised doubt on whether BoE is really ready for a rate hike. Australian Dollar ended as the third weakest as markets were disappointed that RBA didn’t turn hawkish after keeping interest rates unchanged.

The entering into of an era of monetary stimulus exit remained the main theme in the markets. This was clearly reflected by surging global bond yields. In particular German 10 year bund yields surged on hawkish ECB accounts to close at 18 month high at 0.57%. (More on ECB in June’s Minutes Revealed ECB Discussed over Removing Asset Purchases Guidance, Euro Soars) That took global yields generally high. The US 10 year yield extended recent rise from 2.130 to close at 2.393. The development further affirmed the case that consolidation pattern from 2.621 has completed at 2.103 already. 2.423 is now the key level to watch in July. Firm break there will likely send TNX through 2.621 high to resume the larger up trend.

Yen suffered most from there development and was sold off broadly. In response to the surge in global bond yields, BoJ announced to carry out an emergency fixed-rate bond buying operation to curb long term yields under the so called "Yield Curve Control" framework. The central bank said it will buy unlimited amount of JGB with maturities of 5 to 10 years. This is the third time BoJ carries out such operations since the announcement of YCC last year. The first offer in November drew no bids. Under the second operation in February, JPY 723.9b in bonds were purchased.

Dollar responded positively to last week’s economic data releases but buying was far from being decisive. ISM manufacturing index rose from 54.9 to 57.8 in June. ISM services rose from 56.9 to 57.4. NFP showed 222k growth in June versus expectation of 173k. Prior month’s figure was also revised up from 138k to 152k. However, unemployment rate rose 0.1% to 4.4%. And more importantly, average hourly earnings rose 0.2% mom versus expectation of 0.3% mom. Prior months wage growth was also revised down from 0.2% mom to 0.1% mom.

The FOMC minutes for the June meeting unveiled that members were divided over the timing of balance sheet reduction while there was also discussion over the recent inflation weakness. While "several preferred to announce a start to the process within a couple of months", "some others emphasized that deferring the decision until later in the year would permit additional time to assess the outlook for economic activity and inflation". Regarding softer inflation reading, most members viewed the weakness as "largely reflecting idiosyncratic factors, including sharp declines in prices of wireless telephone services and prescription drugs. They expected these developments as transitory and having "little bearing on inflation over the medium run". More in FOMC Members Divided over Balance Sheet Reduction Schedule.

In spite of all the talks, markets are clearly unconvinced by the chance of another Fed hike in September. Fed fund futures are pricing in around 13.6% chance of that, down from 18.4% even after the solid economic data release. Markets will now look into Fed chair Janet Yellen’s testimony this week for more guidance. It should be pointed out again that even if Fed is still on course for three hikes this year, the committee has an option to start shrinking the balance sheet in first in September and hike in December. Or of course FOMC has the option of doing just one of the two in the second half of the year.

Also, while the dollar index recovered last week, the weak momentum and suggests that it’s mainly a corrective move. The index is held well below 97.87 near term resistance, below the falling 55 day EMA, and bounded inside medium term falling channel. Whole fall from 103.82 is still on course, as a long term correction, to 91.91 key support level, before getting enough support for sustainable rebound.

Markets are mean if you don’t turn hawkish

BoC Governor Stephen Poloz said in a newspaper interview that the central bank has to look through near term "fairly soft" inflation reading and anticipate the picture 18 to 24 months ahead. Otherwise, "we’d always be two years behind in the reaction." And, the rest of BoC’s model suggested that output gap would close some time in first half of 2018 and inflation will then be well into an up trend. Thus, it’s appropriate to start removing some of the monetary stimulus. Also, job data from Canada showed strong growth of 45.3k in June, while unemployment rate fell to 6.5%. Markets are now generally expecting a 25bps hike by BoC this week to 0.75%.

On the other hand, RBA left the cash rate unchanged at 1.5% in June. While the decision had been widely anticipated, Aussie slumped after the announcement as the central bank failed to deliver a more hawkish tone as some of the global counterparts did. Policymakers affirmed that Australian economy would continue to grow gradually. Yet, they pointed to the strength in Australian dollar and subdue inflation as key reasons for standing on the sideline. Meanwhile, RBA remained concerned over the overheating housing market. More in RBA Disappointed As It Failed To Hint Rate Hike.

The contrast in market reactions is clearly seen in AUD/CAD, whose decline accelerated to as low as 0.9770 last week. The structure of price actions since 2011have been corrective. And, that from 2015 low at 0.9148 is also corrective. There is no clear sign of a medium term reversal yet, not is there indication of a long term term. But in any case, for now, AUD/CAD will likely extend the fall from 1.0344 to channel support (now at 0.9592), which is closed to 0.9591 support. 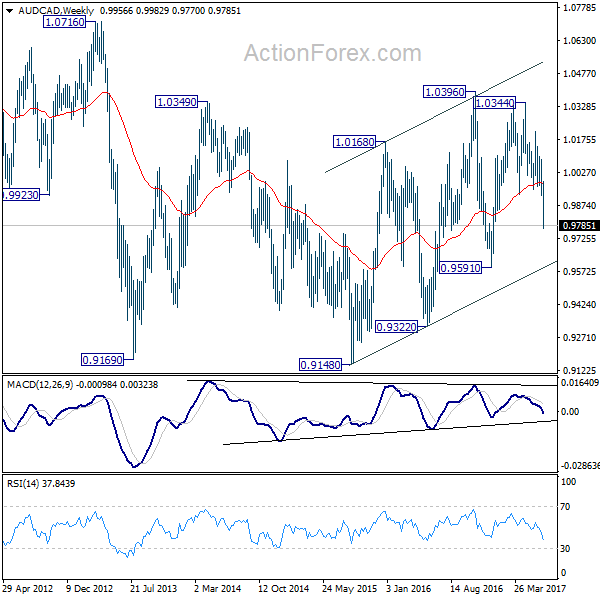 Regarding trading strategy, firstly we closed our EUR/GBP (bought at 0.8740) at open at 0.8770 last week, wit 30 points profit. The buy GBP/JPY on dip to 144.00 was not filled as the weekly low was 145.73. We’ll cancel this buy GBP/JPY order first as recent economic data are not supportive for a BoE hike yet. Also, while the overall sell Yen strategy was correct but we were not quite correct in anticipating strength in the pound.

Regarding the USD/CAD short (sold at 1.3510), we were not wrong in anticipating resilience in the Canadian Dollar. It was first supported by rebound in oil price. And just as oil reverses, there came hawkish BoC comments and then strong job data. However, our protective stop at 1.3010 was just too tight that it was hit when USD/CAD recovered to 1.3013. Hence, the position was exited with 500 pts profit.

Technically, we’re still expecting more broad based strength in Canadian Dollar ahead. And, USD/CAD’s decline from 1.3793 is expected to head for a test on 1.2460. But for the near term, there is risk of a sell-on-fact pull back as BoC delivers a rate hike this week. In particular, short covering in USD/CAD can be quite violent if BoC indicates that this hike is just a one-off. Hence, we’ll hold our hands off on USD/CAD first. 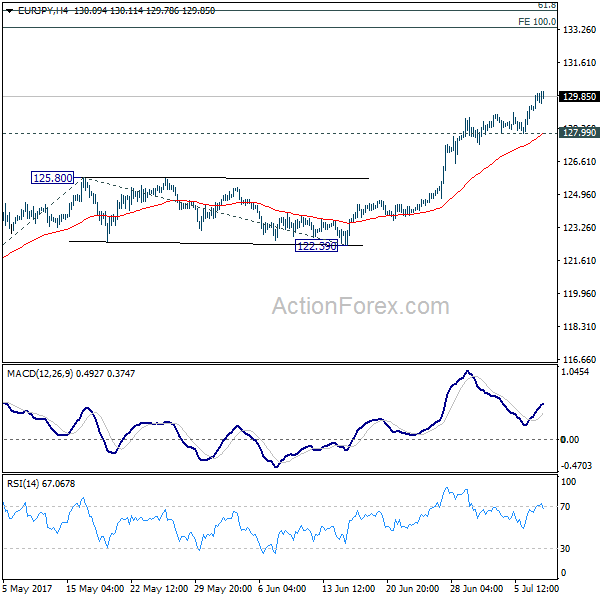 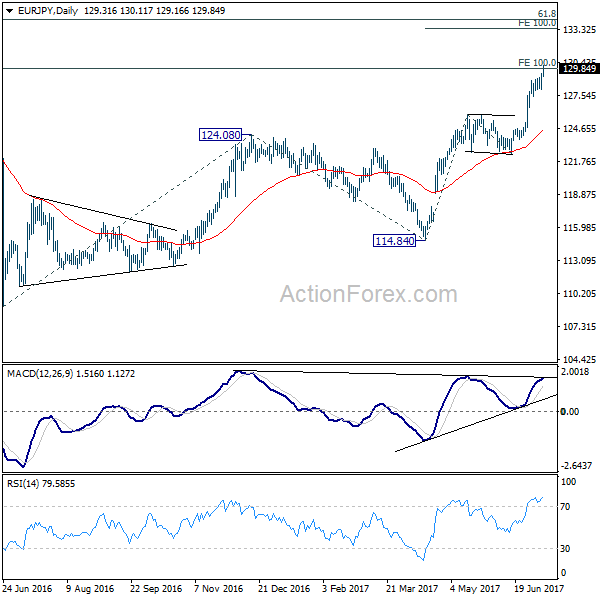 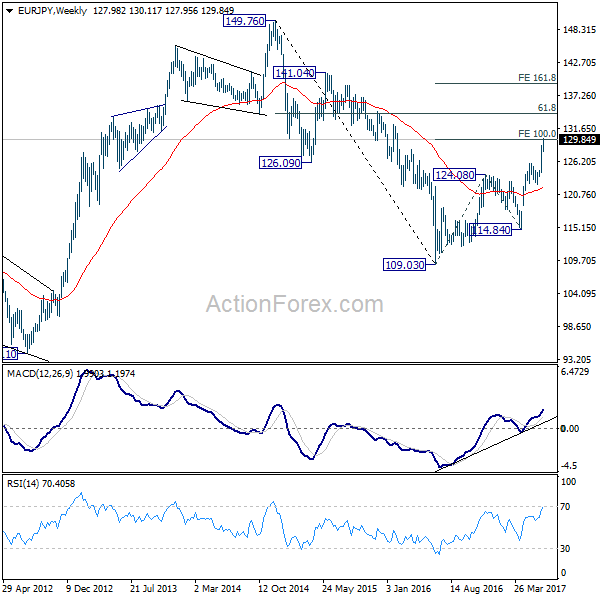 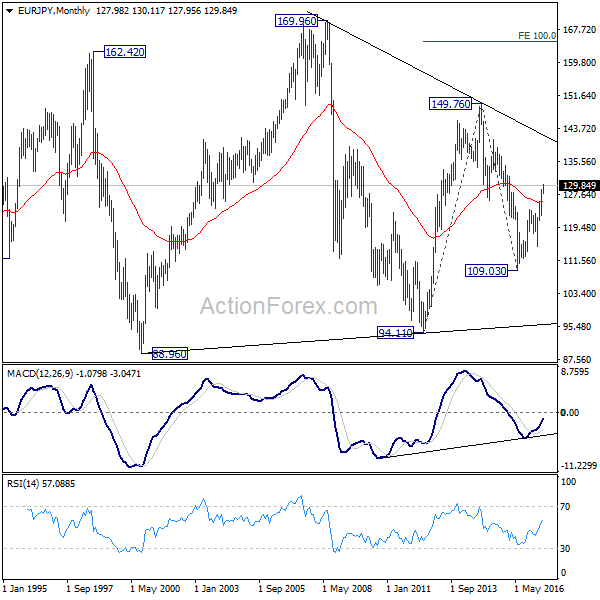