The anticipated market stabilization didn’t happen last week. Instead, despite massive monetary and fiscal stimulus, stocks around the world still ended sharply lower. Nevertheless, as stocks are showing sign of loss of downside momentum. Treasury yield has somewhat stabilized in range. We’d see that the rock bottom in investor sentiment should be around the corner. In particular, it would be a big relief if coronavirus spread in Europe begins to slow, while situation in the US would be contained. But that’s still two big “ifs”.

In the currency markets, Dollar ended as the strongest one, followed by Yen and Swiss Franc. The strong rally in Dollar Index and break of 1.0777 low in EUR/USD are important developments that point to more upside in the greenback ahead. On the other hand, Australian Dollar ended as the worst performing one, followed by New Zealand. Parity in AUD/NZD would be the make or break point for Aussie. 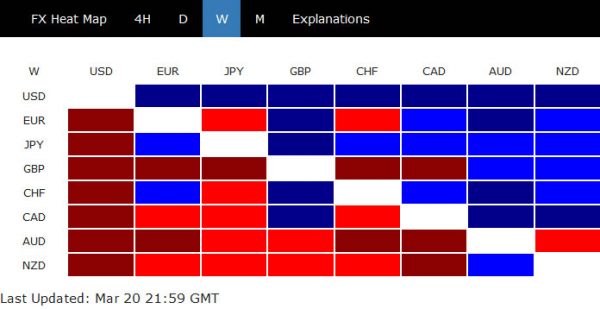 DOW not bottomed yet, but it should be near

DOW spiraled lower last week and closed below 20000 handle at 19173.98. Friday’s late selloff was a disappointment as it argues that a bottom is not found yet. Another low is likely for the initial part of this week. But considering diminishing downside momentum as seen in hour MACD, a bottom should be around the corner. 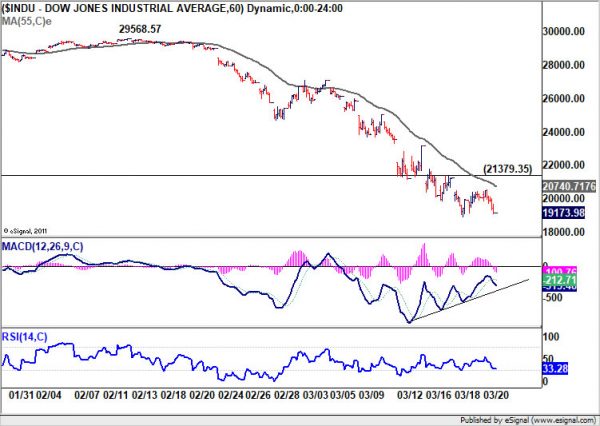 We’re seeing the the fall from 29568.57 as correcting the whole up trend from 6469.95. With that in considering, the area for near term bottoming could be around 50% retracement at 18019.26. Break of 21379.25 resistance should confirm bottoming and start an up leg inside the long term correction pattern. 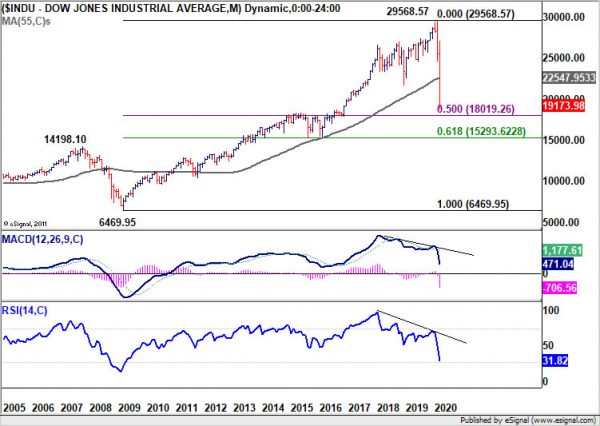 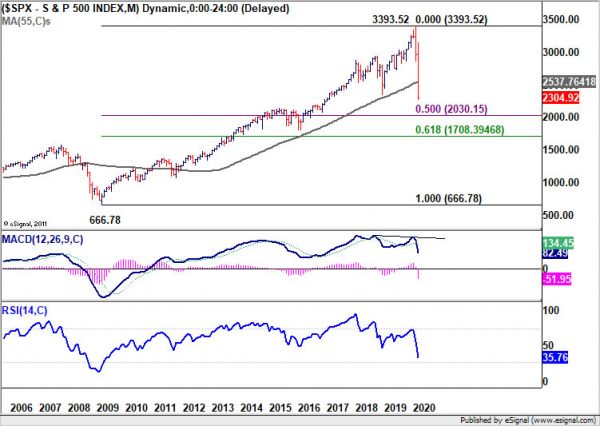 Bond traders approve fiscal and monetary measures of US

10-year yield’s strong rebound last week confirmed short term bottoming at 0.398. The development put yield curve back in preferred sharp. Markets see that the economy would eventually be back on track with all the monetary and fiscal measures. For the near term, we’d expect range trading to continue between 0.398 and 1.429, until any breakthrough in the coronavirus pandemic. That could also correspond to range trading in USD/JPY below 112.22 resistance. 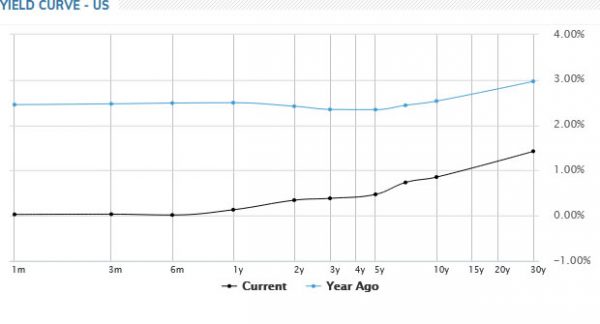 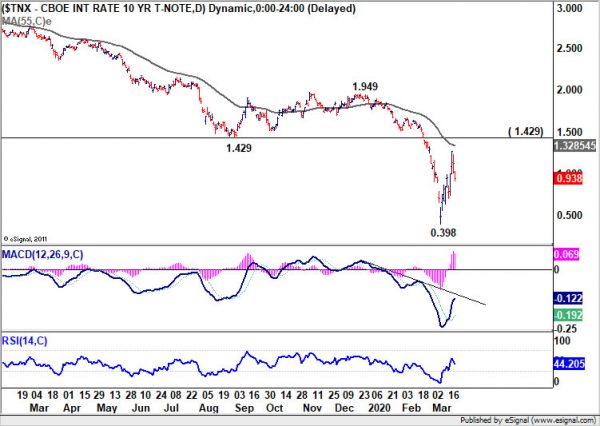 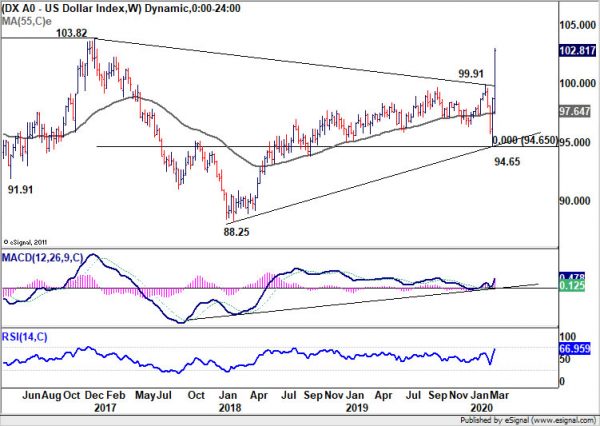 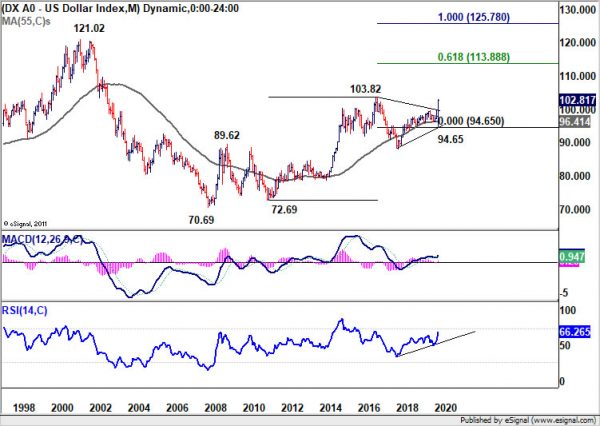 Australian Dollar has clearly been the worst performing one, even against other commodity currencies, including the oil troubled Canadian. The fact that coronavirus is posing great risk to southern hemisphere, which is going to enter into winter in the coming months, is a factor. RBA’s record low interest rate of 0.25% and it’s mini-QE is another factor. 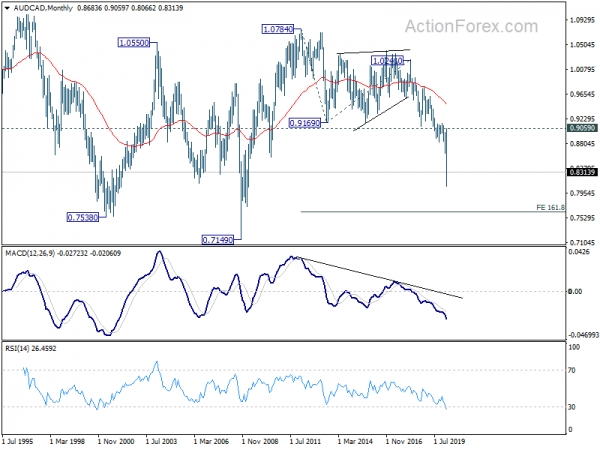 Development in AUD/NZD will be very important in the fortunate of Aussie. It breached parity to 0.9994 for the first time and quickly recovered. Though, subsequent recovery was relatively weak and is held well below 1.0315 support turned resistance, keeping near term outlook bearish. 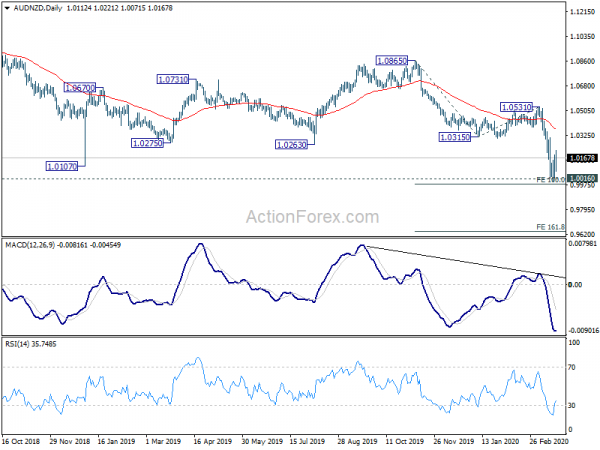 If AUD/NZD could at least stabilize in the current range, decline of Aussie elsewhere would be kept in relatively “controlled” manner ahead. However, sustained break of the psychologically important level would confirm resumption of long term down trend. AUD/NZD itself would head towards 61.8% projection of 1.3793 to 1.0016 from 1.0865 at 0.8531 in medium to long term. The selloff in Aussie elsewhere would be very persistent with much potential of further downside acceleration. 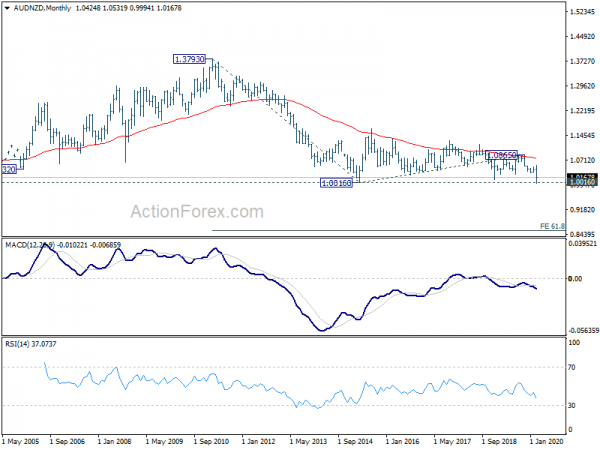 EUR/USD dropped sharply week and broke 1.0777 support to close at 1.0692. The development suggests larger down trend resumption. Initial bias stays on the downside this week for 1.0397 projection target next. On the upside, break of 1.0981 resistance is needed to indicate short term bottoming. Otherwise, outlook will remain bearish in case of recovery. 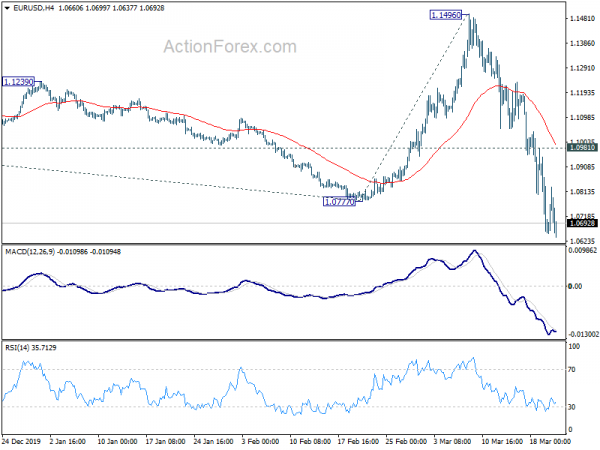 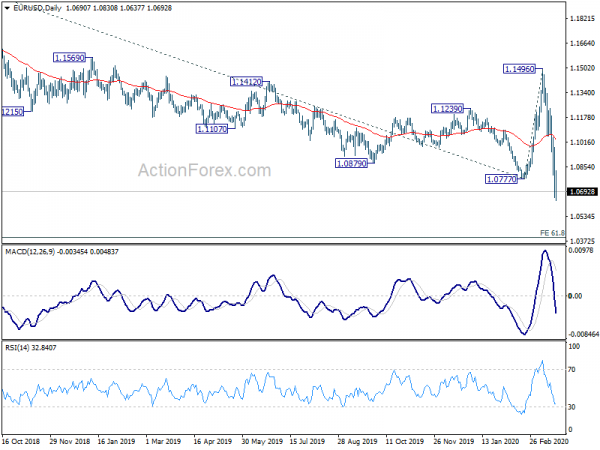 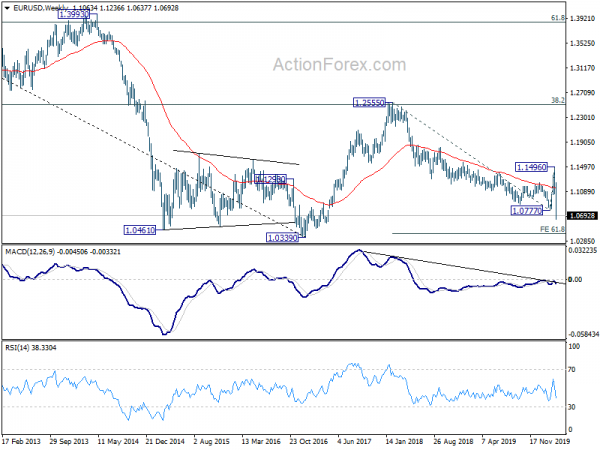 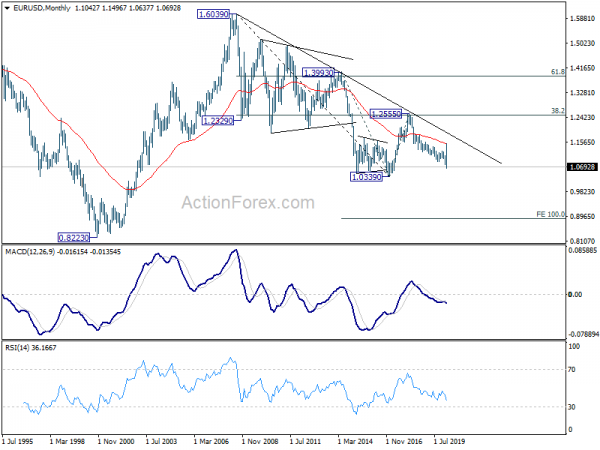