Another week of much volatility in the forex markets. Euro surged to two year high against Dollar as markets took ECB’s message as a nod to stimulus withdrawal down the road. The common currency ended as the second strongest one, just next to it’s cousin Swiss Franc. On the other hand, Sterling fell broadly as rate hike speculations were dented by much lower than expected CPI reading. Dollar followed closely as markets were getting more dissatisfied with US President Donald’s lack of progress in tax reforms. Much volatility was also seen in Australian Dollar on RBA rhetorics. Canadian Dollar also gained against the greenback but is seen as losing momentum.

Dollar has been under much selling pressure last week since the collapse of Trumpcare, which would suppose replace Obamacare, in Senate in the early part of the week. Selling intensified partly due to Euro’s strength. But more importantly, markets were getting increasing impatient with the lack of progress in US President Donald Trump’s work on the economy, due to persistent political distractions. Failure to repeal Obamacare despite majority in the Congress was seen as a proof of lack of political leadership. In addition, the expansion of probe of possible Russian tie during last years campaign suggests that such distraction is not going to end soon. The news on Friday that White House press secretary Sean Spicer resigned certainly wouldn’t steady the ship.

FOMC meeting will be a key to watch this week. While markets are not expecting any change in monetary policies, they will, for sure, be eager to get hints on what Fed would do in the September meeting. Fed could either raise federal fund rates by another 25bps to 1.25-1.50%, or announce the plan to shrink the balance sheet, or do nothing. Fed fund futures continue to price in less than 10% change of a September hike. But, the Fed might only have minor tweak in the languages on the economy and leave itself with the flexibility until September. If that’s the case, markets will look into GDP report to be released on Friday for more guidance.

To recap ECB kept the main refi rate, the marginal lending rate and the deposit rate unchanged at 0%, 0.25% and -0.40% respectively. The central bank also affirmed that the QE program would be maintained at the monthly pace of 60B euro, which is "intended to run until the end of December 2017, or beyond, if necessary, and in any case until the Governing Council sees a sustained adjustment in the path of inflation consistent with its inflation aim". While leaving the policies and statement unchanged, Draghi promised QE discussions to begin in autumn. However, he refused to comment whether it means the September 7 meeting. That is seen as the main driver of Euro’s rally. More in EURUSD Rallied to Fresh 14-Month High as Draghi Promised QE Discussions in Autumn.

While ECB is believed to be on course to withdraw monetary stimulus, or least, taper asset purchase next year, the surge in Euro could complicate the picture. European investors were clearly unhappy with Euro’s appreciation with consideration that it could hurt exports. This could easily be seen in the selloff in German DAX towards the end of the week. The decline from 12951.54 resumed last week and closed at 122.40.06 after steep fall. For the moment, such fall is viewed as a corrective move only. And strong support is expected strong 11941.57 cluster (38.2% retracement of 10402.59 to 12951.54 at 11977.84) to contain downside and bring rebound. However, firm break of the level would be a sign of trend reversal. That could be an indication that the economy is not ready for stimulus withdrawal yet and could derail ECB’s path.

AUD/JPY closed higher but after RBA minutes and BoJ, but lost momentum

BoJ left monetary policies unchanged as widely expected. Short term policy interest rate was held at -0.1%. The central bank also maintained the annual pace of asset purchase at JPY 80T to keep 10 year JGB yield at around 0%. Meanwhile, BoJ noted in the quarterly report that "recent price developments have been relatively weak, as companies remained cautious in raising wages and prices." And, "risks to the economy and price outlook are skewed to the downside." Also as widely expected, BoJ lowered inflation projections and raised growth projections. The timing for meeting 2% inflation target is pushed back for the sixth time. BoJ now expects inflation to hit target in the fiscal year ending March 2020. More in BOJ Left Rates and Asset Purchases Unchanged. Pushed Back Timing to Reach +2% Inflation.

Australian dollar was boosted earlier in the week as RBA minutes revealed discussion that the neutral nominal rate should be at 3.50%. The minutes was taken by the markets as a hawkish turn in the central bank. However, Aussie then reversed after RBA Deputy Governor Guy Debelle urged the markets not to read too much into the board’s discussion on neutral rate. He said that "no significance should be read into the fact the neutral rate was discussed at this particular meeting" And, "most meetings, the board allocates some time to discussing a policy-relevant issue in more detail, and on this occasion it was the neutral rate."

It should be noted that the discussion within the RBA board looked rather academic. They pointed out that the neutral real rate fell by around 150 bps to 1.00% after the global financial crisis in 2007/8. And with that, the neutral nominal rate is believed to be at 3.50%. And with easing risk aversion and improvement in potential growth rate, there is chance that the neural real rate will climb back to a more normal level. 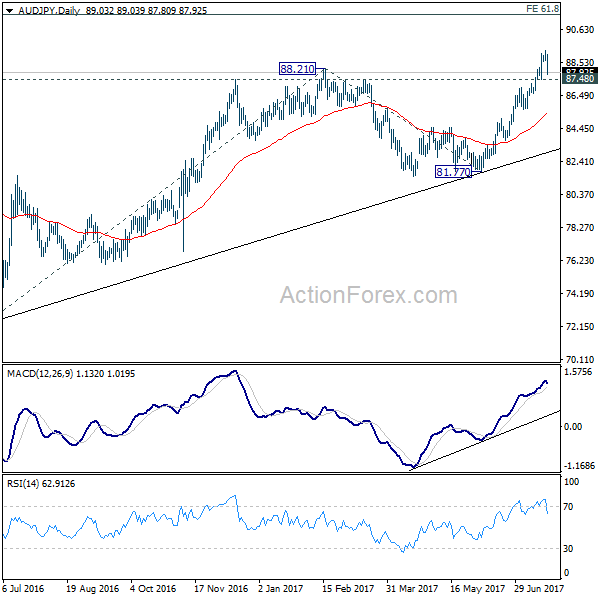 Canadian Dollar pull back possibly due

Canadian Dollar traded mixed last week but managed to extend gain against Dollar. The Loonie stayed firm after mixed inflation and retail sales data. There is, so far, no evidence to claim that BoC’s decision to raise interest rate earlier this month was wrong. But there is no additional support for further rate hike yet. Indeed, USD/CAD is seen losing downside momentum in 4 hour MACD, as it approaches 1.2460 key support level.

In addition, WTI crude oil failed to sustain above 55 day EMA once again last week and the sharp fall on Friday carries some bearish implication. The structure of the rebound from 42.5 is so far corrective looking. And there was not enough follow through buying to keep it above 55 day EMA this time. The development is raising the risk of revisiting 42.5 low. Or even extending the large corrective fall from 55.24 to 50% retracement of 26.05 to 55.24 at 40.65. Overall, the risk of a pull back in Canadian Dollar, rebound in USD/CAD, is increasing.

Our GBP/CHF order was entered at 1.2610 last week stopped out at 1.2450, losing 160 pts. The strategy was totally wrong as the anticipated strength in Sterling didn’t happen. We’ll keep our hands off this week first and look at other opportunities later.

EUR/USD’s rally accelerated to as high as 1.1682 last week and took out 1.1615 resistance. There is no sign on topping yet and initial bias remains on the upside. Current rise should now extend to 1.2 handle next. On the downside, below 1.1582 minor support will turn intraday bias neutral and bring consolidations. But downside should be contained by 1.1444 resistance turned support and bring rise resumption. 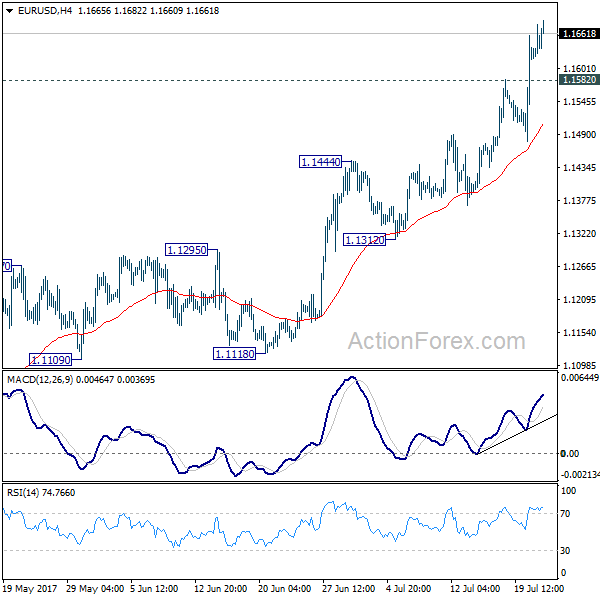 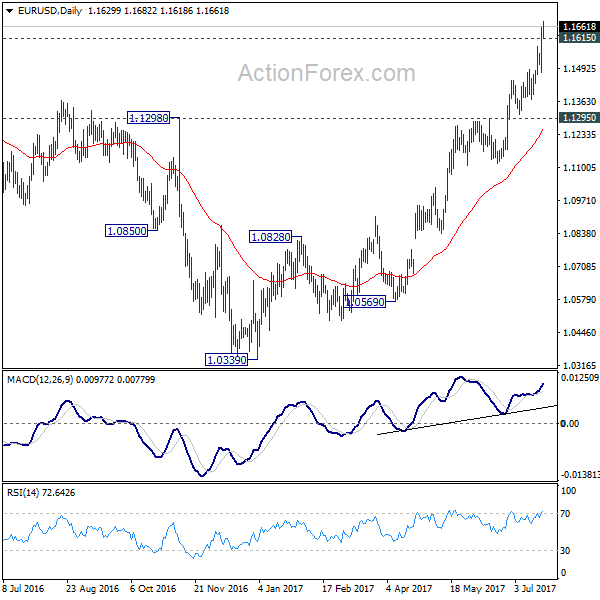 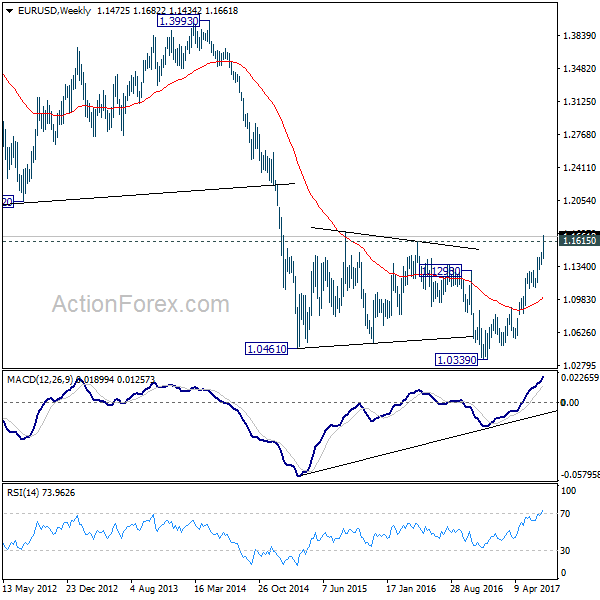 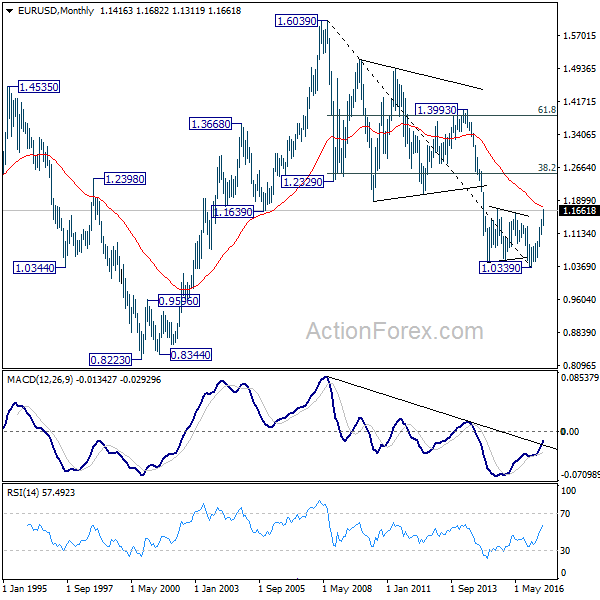