The unimaginable negative oil price was the biggest head-liner last week. But the impact on other markets were relatively short lived. Canadian Dollar was much bothered for most of the week, but eventually it’s just the second worst performing, following Sterling. On the other hand, Australian Dollar ended as the strongest, followed by Yen, and that’s a sign of indecisiveness during consolidation in risk markets.

Developments of the coronavirus pandemic will remain a major factor for investor decisions for the near term. Daily deaths appeared to be flattening globally, which is a good sign. US cases surged mainly due to intensified testing while daily deaths steadied. Italy, Spain and France continued to show improvements. But major risks are now observed in Mexico, Brazil, Russia, and to a lesser extent Turkey. 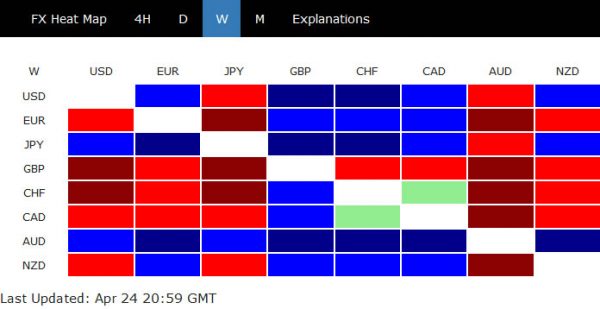 Oil prices suffered unprecedented turbulence last week, as May WTI crude oil contract tumbled into negatively, hitting as low as -40.32. The lack of qualified storage to keep the overwhelmed supply surplus was true, but the move was very much exaggerated by contract expiry too. June contract took up the spot light well and recovered to close at 16.94.

The extreme volatility is unlikely to repeat itself again, as traders are now psychologically prepared. Yet, there is no sign of trend reversal, at least until 19.46 support turned resistance is taken out decisively. WTI crude oil will more likely spiral downward again, in much orderly fashion though. 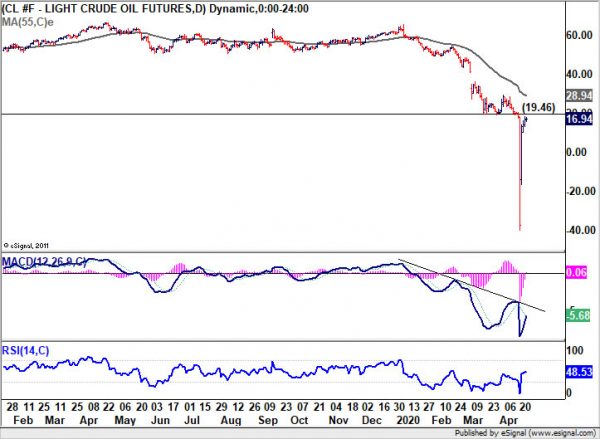 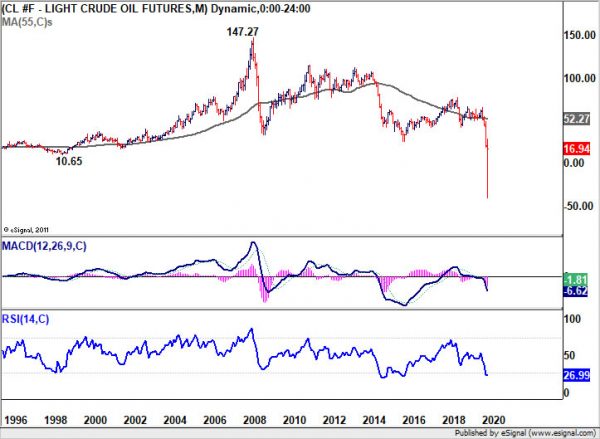 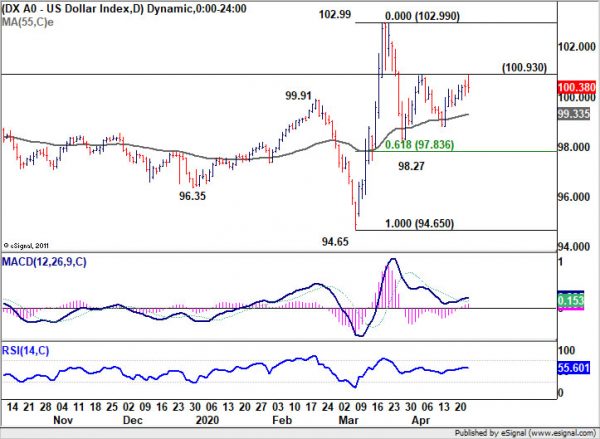 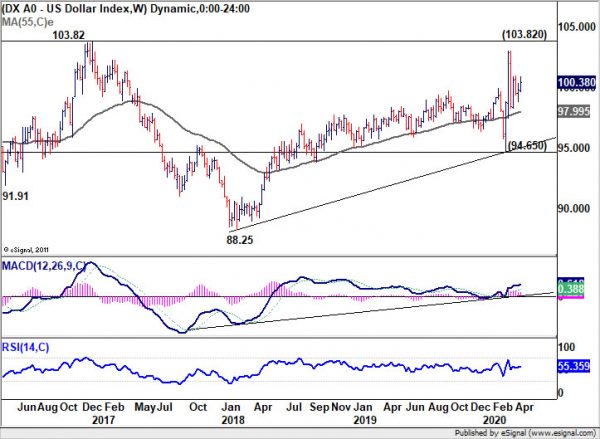 There were lots of talks on the shape of the upcoming recovery, V or U. But such discussions would remain rather academic until we finally see the end of the coronavirus pandemic, for every country since it’s a highly connected world. Normally, the stock markets and respective currencies don’t have very close correlations. Yet, going ahead, underlying investor confidence might provide some hints on the the next move in the currency markets. After all, economic recovery is also a confidence thing. If that’s that case, Sterling and Aussie could lag behind others in the next move. 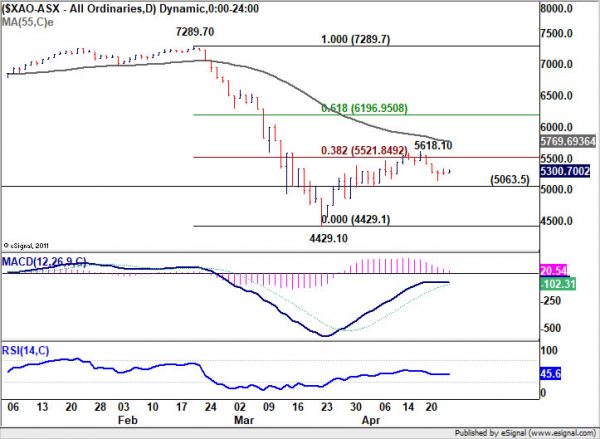 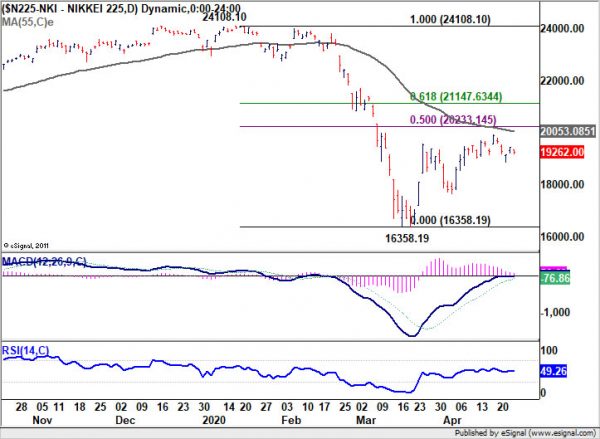 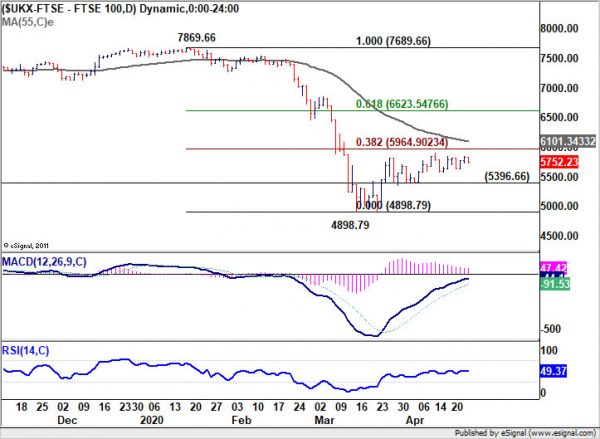 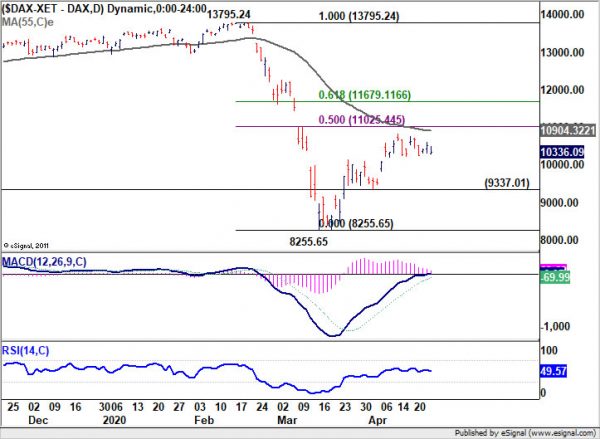 DOW’s performance was actually the best among the above major indices discussed. 50% retracement of 29568.57 to 18213.65 at 23891.1 was hit, as well as 55 day EMA. The initial dip last week raised the chance of near term reversal but there was no follow through selling. Focus will be on 22595.06 resistance turned support this week. Break there will indicate rejection by 55 day EMA and bring retest of 18213.65 low. 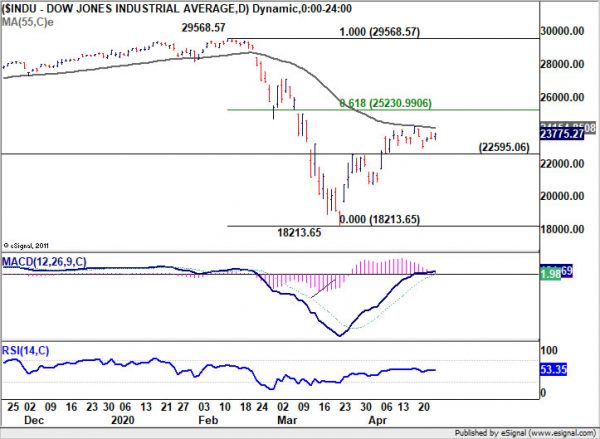 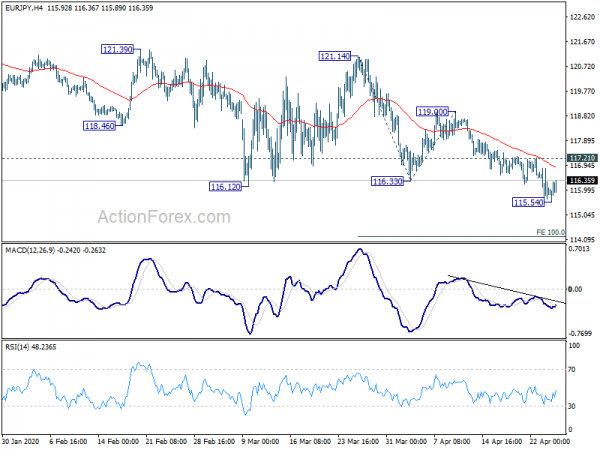 In the bigger picture, down trend from 137.49 (2018 high) is possibly resuming. Medium term bearishness is maintained with the cross staying well inside falling channel established since 137.49 (2018 high), as well as below falling 55 week EMA. Next downside target will be 109.48 (2016 low). In any case, outlook will remain bearish as long as 122.87 resistance holds, in case of rebound. 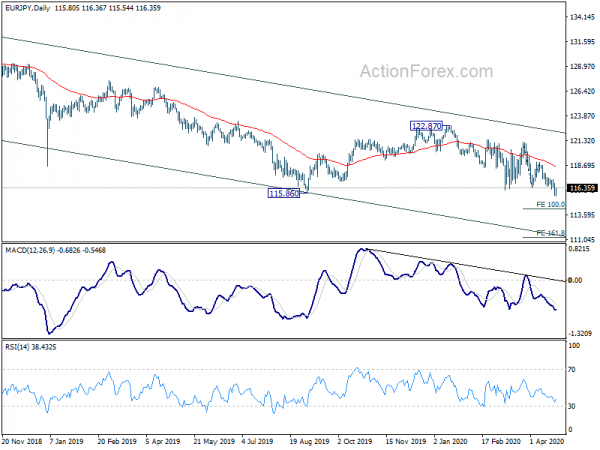 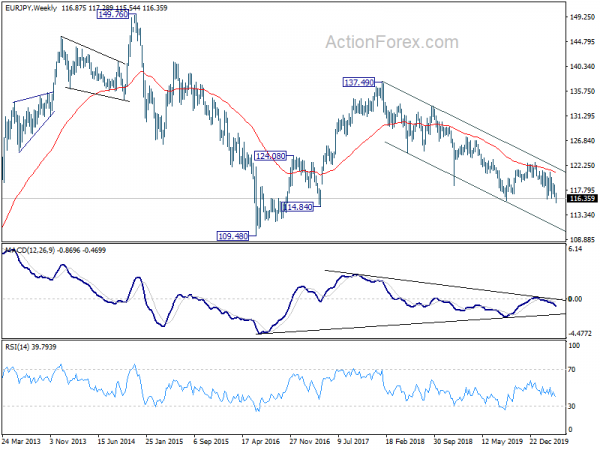 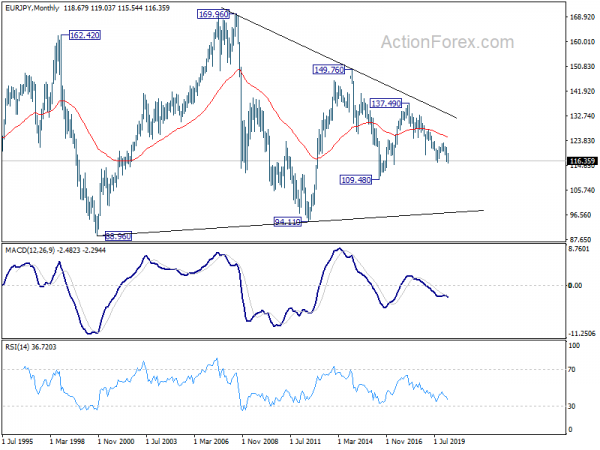