Markets looked rather indifferent to the resurgence of coronavirus infections. Daily new cases surged to new high above 200k. Total cases broke 11m while deaths is closing in to 530k. But traders and investors couldn’t care less. Instead, sentiments were lifted by hope of recovery ahead, with Q3 already started. US ISM manufacturing turned back into expansion while non-farm payrolls grew 4.8m. France PMIs also turned back into expansion while UK PMIs steadied. China’s PMI services even suggests strong growth ahead.

Positive sentiments were reflected in NASDAQ and China’s Shanghai SSE, but not so much in other stock indices. While commodity currencies ended the week higher together with Sterling, strength is Aussie is far too weak considering the late rally in Chinese stocks. Euro also ended as one of the weakest together with Dollar and Yen. It might take a couple of weeks more for the markets to sort out a coherent direction among themselves. 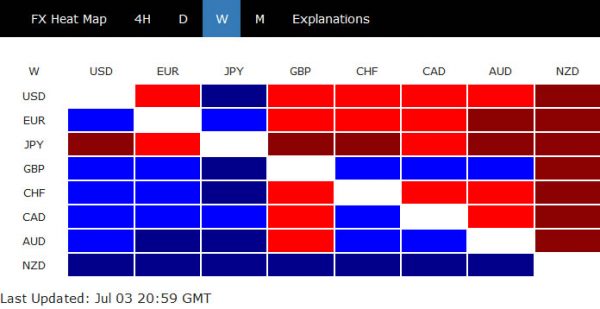 Chinese stocks staged a massive rally last week. There seemed to be growing optimism of a solid recovery as both the official PMIs and Caixin PMIs pointed to underlying strengthen in services. The optimism was not much reflected in other markets, including currencies yet. But as China was the first economy hit by the coronavirus, it could also be the first, to come out of the impacts. We’ll see if the rally in Chinese stocks could spread to other markets in Q3. 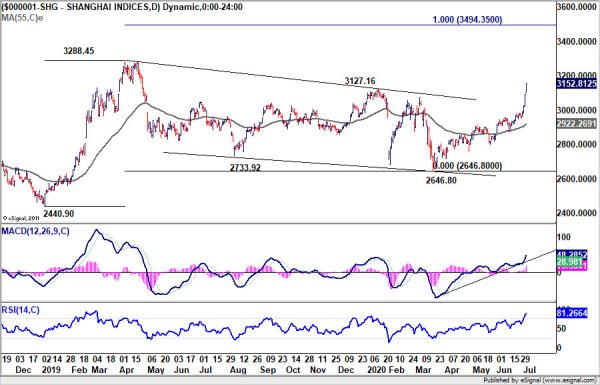 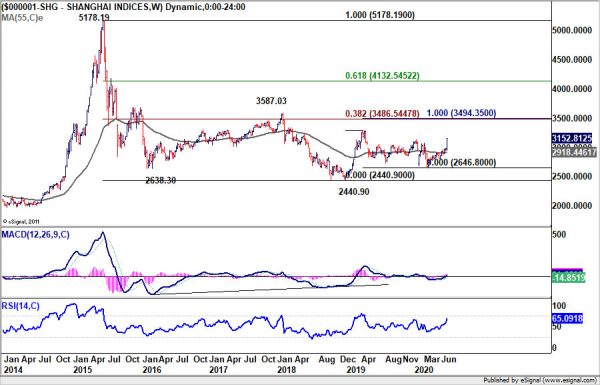 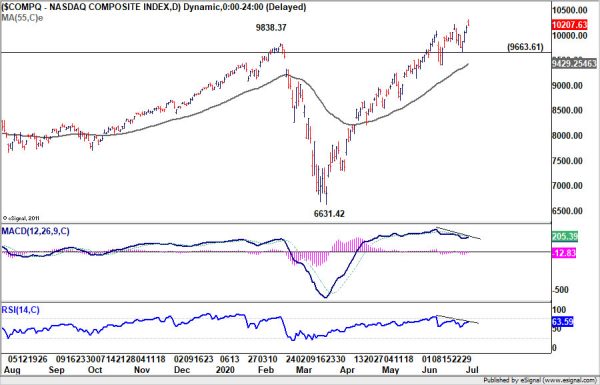 Break of 9663.61 support should indicate that the overdue pull back is starting. Nevertheless, NASDAQ has been defying out calls for tops so many times. Sustained trading above 10279.62 would pave the way to 138.2% projection at 11673.23 next. 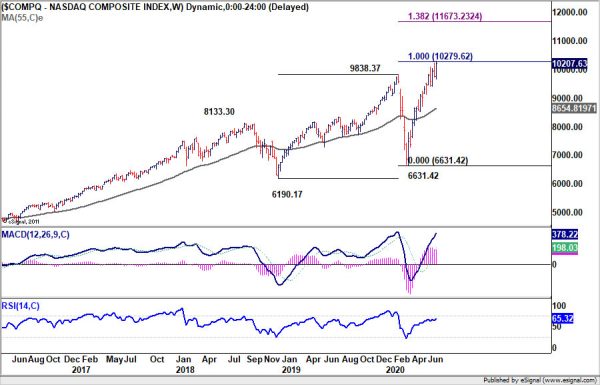 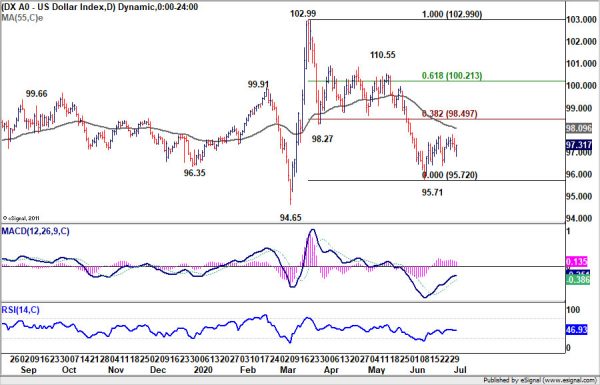 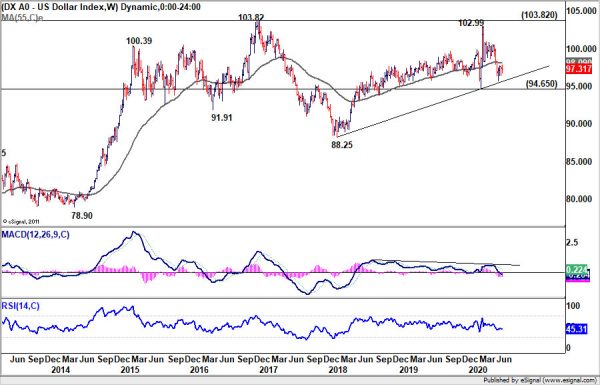 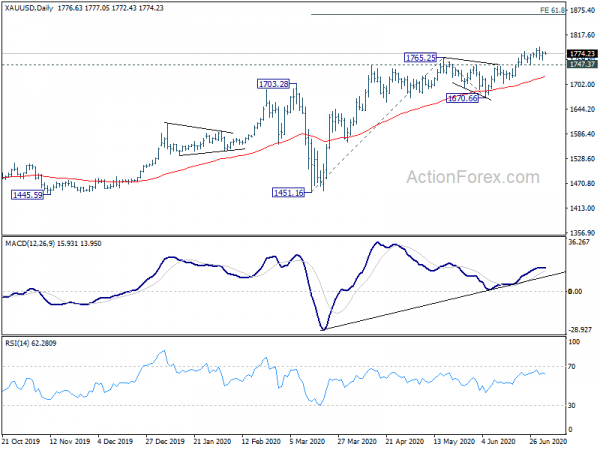 Despite last week’s recovery, there is not change in our view that a correction in WTI crude oil is due. It’s now close to 42.05 key resistance with clear loss of upside momentum in daily MACD. Break of 36.87 support would confirm and bring deeper fall to 34.36 support and below. If happens, that could be a drag in the stock markets, and support safe haven currencies. 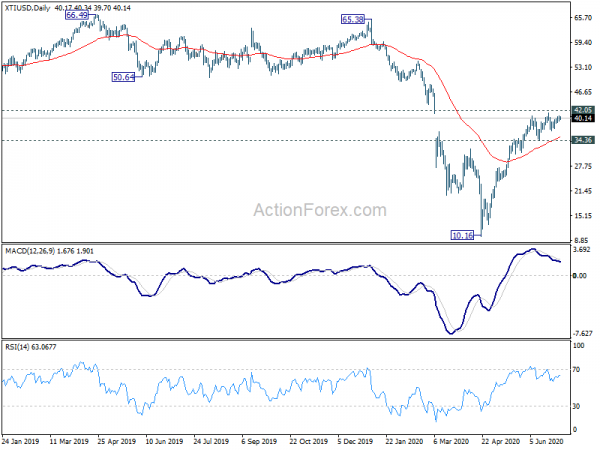 AUD/USD’s consolidative trading continued last week and outlook is unchanged. Initial bias remains neutral this week first. We’d still expect correction from 0.7064 to extend with another falling leg. On the downside, break of 0.6776 will turn bias to the downside for 38.2% retracement of 0.5506 to 0.7064 at 0.6469. Nevertheless, sustained break of 0.7064 will resume whole rise from 0.5506 instead. 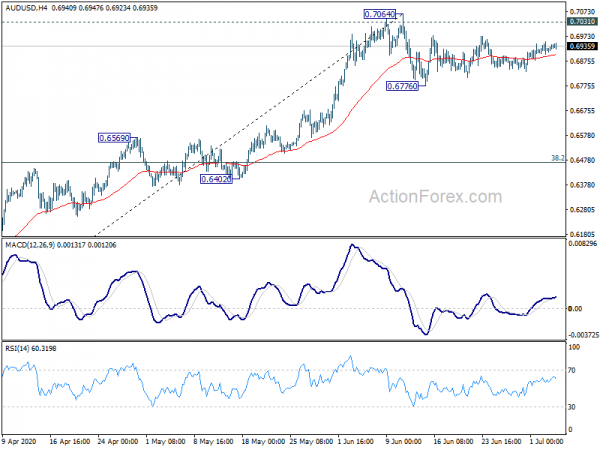 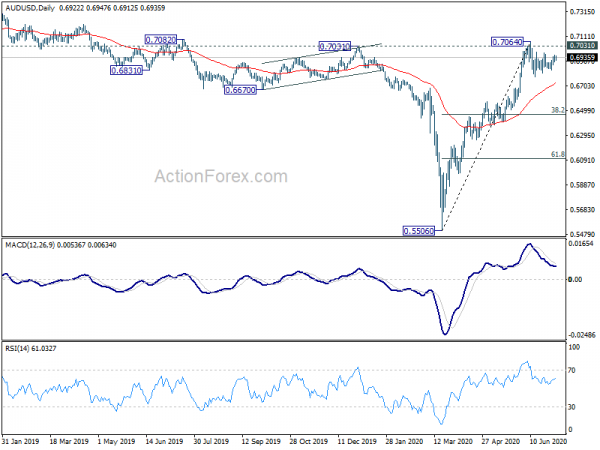 In the longer term picture, there is no change in the view that down trend from 1.1079 (2011 high) is still in progress. Such down trend could extend through 0.5506 low after completing the corrective rise from there. However, sustained break of 55 month EMA (now at 0.7310) will raise the chance of long term reversal and turn focus back to 0.8135 key resistance. 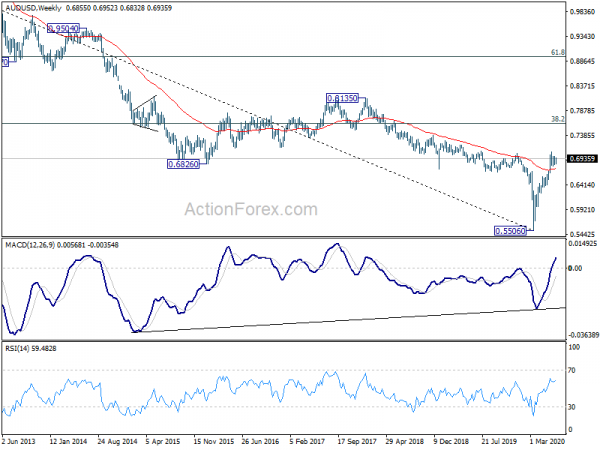 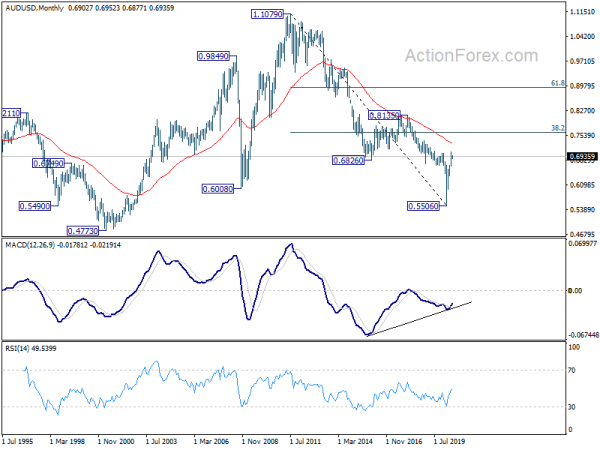