Action Forex
HomeMarket OverviewWeekly ReportEuro's Rally to be Tested by Outcome of EU Summit on Recovery...

Euro ended last week as the strongest one, as pushed up by hope of an agreement over EU’s post-pandemic recovery fund. The strength was particularly apparent against Swiss Franc and Sterling. Yet, up till the time of writing, there seems to be no consensus reached at the EU summit yet. Dutch Prime Minister Mark Rutte even complained that Germany Chancellor Angela Merkel and France President Emmanuel Macron were “walking away grumpy” from the meeting. Rutte added that a compromise is still “possible” at over-time during Sunday, but “there remain big issues”. Euro’s near term fortunate could have a U-turn if the negotiations collapse.

Back on the currency markets, Australian Dollar ended as the second strongest partly supported by iron ore prices, as well as general risk appetite. But it should be reminded that coronavirus cases in Victoria continued to surge which risk is rising for New South Wales. A sharp risk reversal in China’s stock markets could spill over to Asia and drag down the Aussie too. Sterling was the worst performing one last week, followed by New Zealand Dollar and Yen. 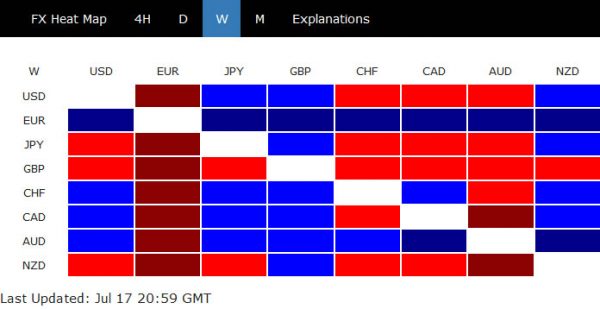 EUR/CHF technically bullish, but next moves depend on EU recovery fund

EUR/CHF will be the first one to watch this week. The strong rebound last week was partly built on hope for an agreement regarding the recovery fund. Purely technically, the development suggests that corrective pull back from 1.0915 has completed at 1.0602. Break of 1.0797 temporary top would reaffirm this bullish case and would probably resume the whole rise from 1.0503 through 1.0915 to 100% projection of 1.0503 to 1.0915 from 1.0602 at 1.1014. But a break of 1.0701 minor support will dampen the bullish case and extend the corrective pattern from 1.0915, probably until the recovery fund issue is resolved. 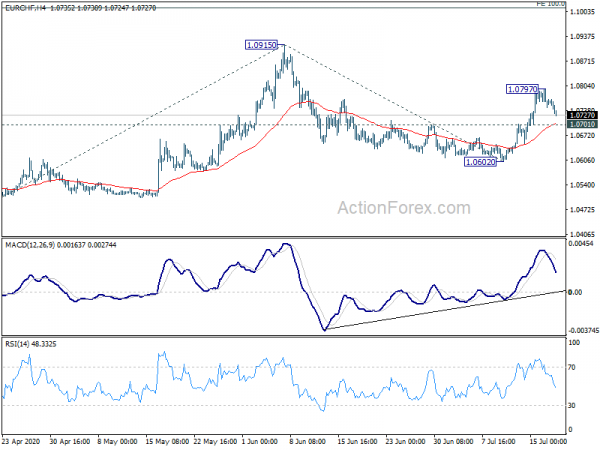 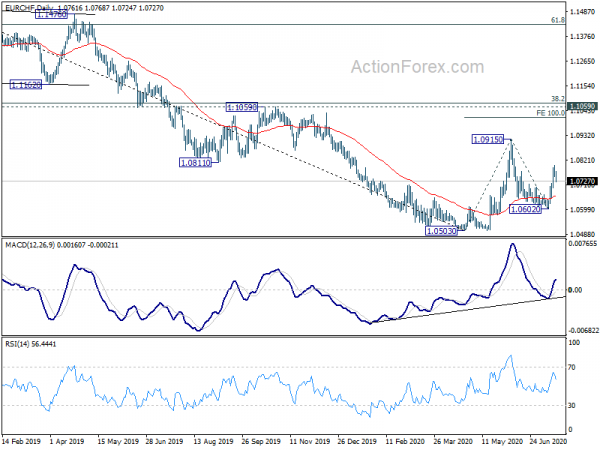 DAX is another one to pay attention too. The index extended the rebound form 8255.65 last week to close at 12919.61. Upside momentum has been rather weak since mid June, considering the price structure, as well as daily MACD. Hence, even in case of further rally, we’d expect strong resistance around 13795.24 high to limit upside and bring a long-overdue correction first. Meanwhile, break of 12416.69 support, if triggered by the collapse of recovery fund talks, would suggest that the correction has already started. 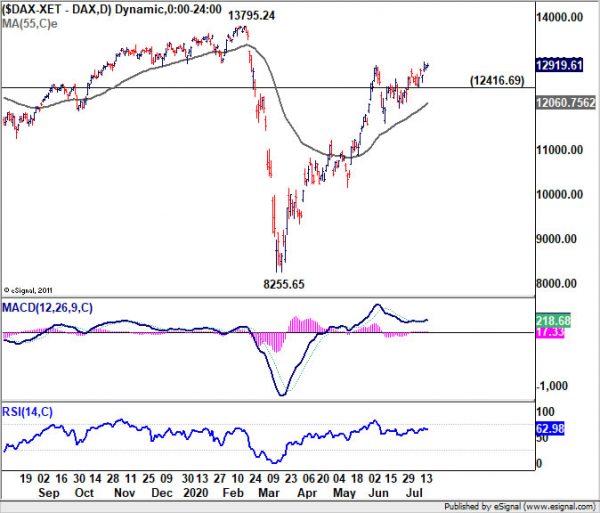 Dollar index gyrated lower last week, thanks to the greenback’s weakest against Euro and Yen. It’s now pressing 95.71 short term bottom and the next move would depends on the direction of Euro this week. Break of 95.71 would extend the decline form 102.99 to test 94.65 key medium term support before having a sustainable rebound. However, break of 96.97 resistance will argue that the rebound has finally started for 38.2% retracement of 102.99 to 95.71 at 98.49. 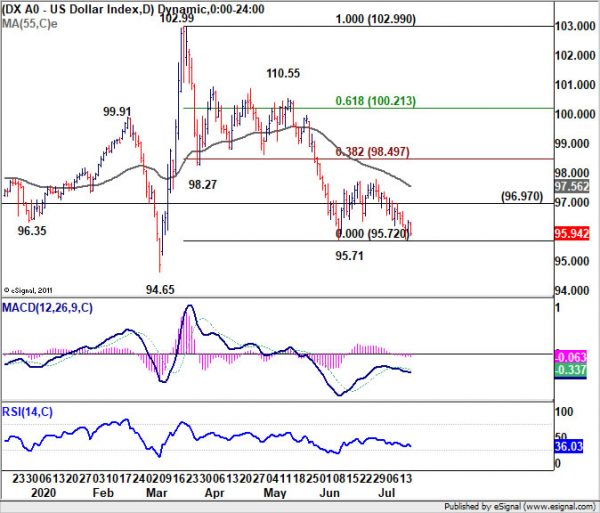 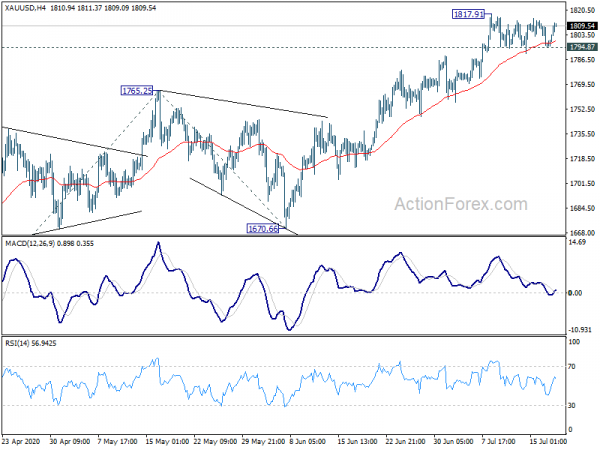 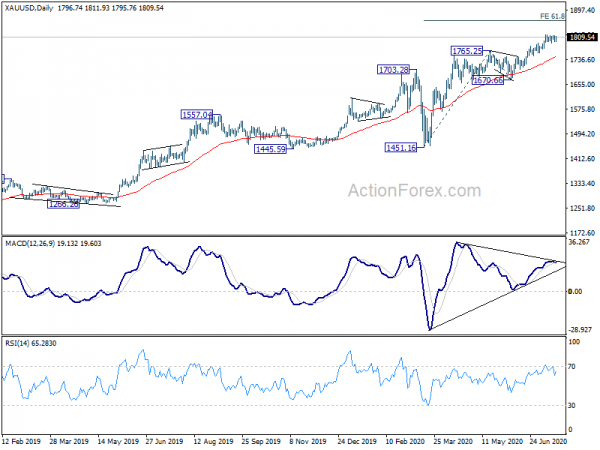 Near term focus is now back to 55 day EMA (now at 3053.12, and close to 3000 hand). Outlook will stay bullish as long as this EMA holds. But a firm break there could declare completion of recent rally attempt. Global equities paid little attention the strong rally in SSE this month. But they may not just shrug it off if a collapse style reversal is next. 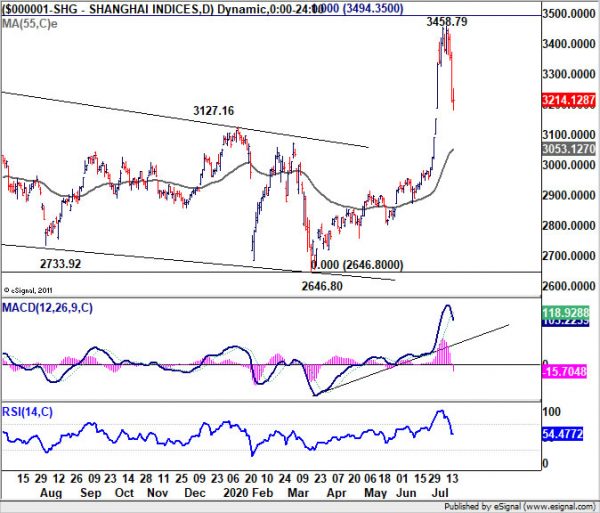 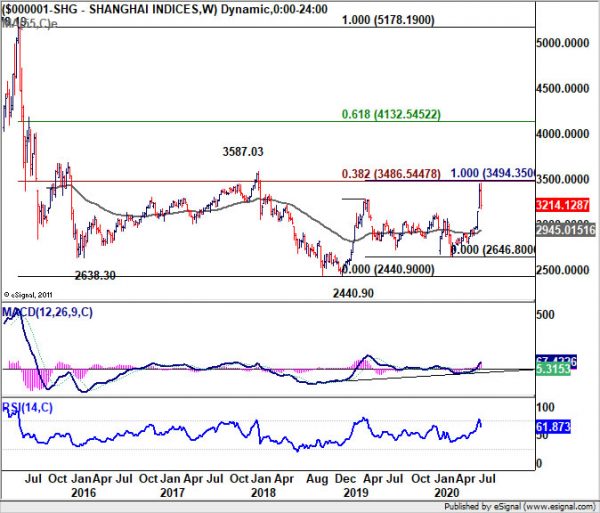 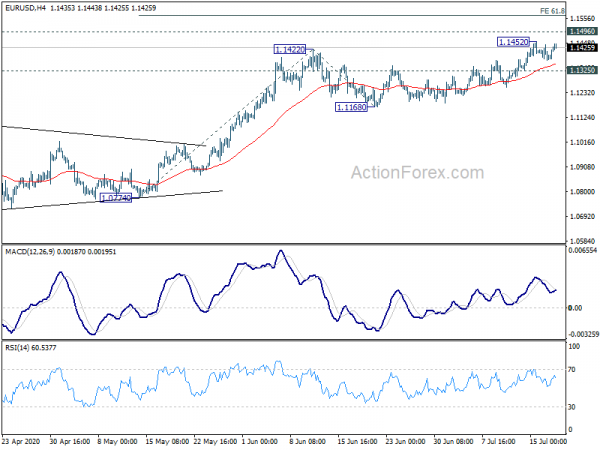 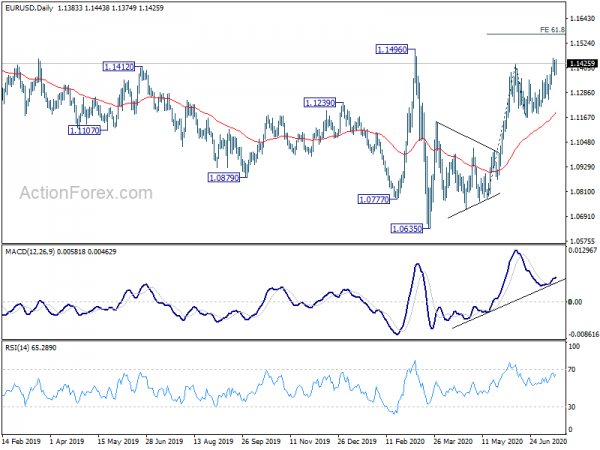 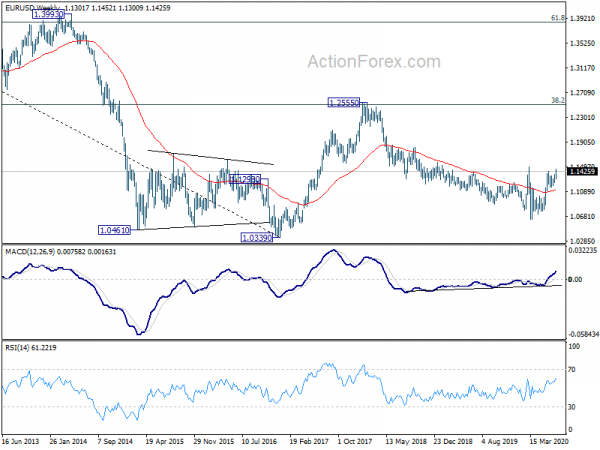 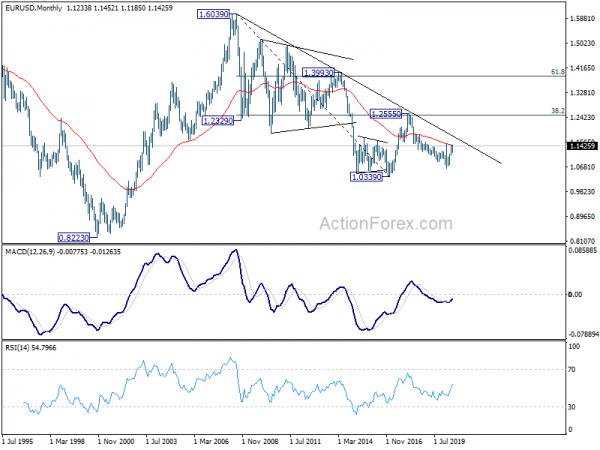