Euro ended as the worst performing one last week as investors could have started to reassess the economic outlook. As ECB meeting accounts pointed out, recent positive market developments were “not fully backed by economic data”. Indeed, they might be based on “overly optimistic expectations” about the Next Generation EU recovery package, and progress on vaccine development. PMIs were a huge blow to optimism with French manufacturing back in contraction. Severe slowdown was seen in the services sector. In the background, another round of rather meaningless ended with nothing but confirmation that no progress was made.

Swiss Franc was somewhat dragged down by Euro as the second weakest. Australia Dollar was the third worst performing, as Victoria’s lockdown appeared to be reflected in data while China’s rebound looked slowing. Yen was the strongest one as treasury yield pulled back. It’s followed by Canadian Dollar , and then Sterling and Kiwi. Dollar, despite the late rally attempt, ended mixed only, held below key near term resistance levels against all major currencies. 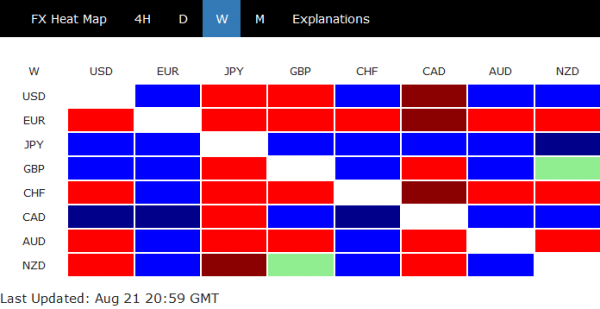 EUR/CHF is a very interesting one to look at for the days ahead. The spike through 1.0838 resistance proved to be a false break last week. Instead, with subsequent steep fall, focus is now immediately on 1.0739 support. Sustained break there will argue that whole rebound from 1.0602 has completed, as a corrective pattern, at 1.0849. That could drag EUR/CHF further lower towards 1.0602 support, and maybe below. Such development could signal a turn in Euro elsewhere. 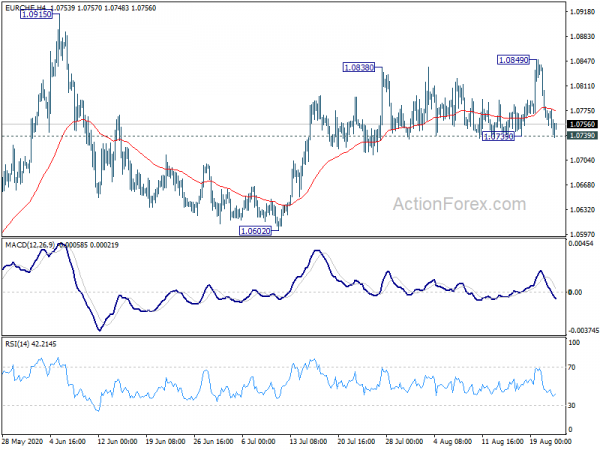 Break of 93.99 would signal short term bottoming in Dollar index

Dollar index dropped further to as low as as 92.12 last week but quickly recovered. Downside momentum is diminishing as seen clearly in daily MACD. There is no further sign of bottoming yet. As long as 93.99 resistance holds, further decline remains in favor. However, a turn in Euro, as confirmed by bearish developments in EUR/CHF, would likely give Dollar a lift. Accompanied by a break of 1.1711 support in EUR/USD, Dollar index’s break of 93.99 should confirm short term bottoming and should at least bring a rebound back to 55 day EMA (now at 95.08). 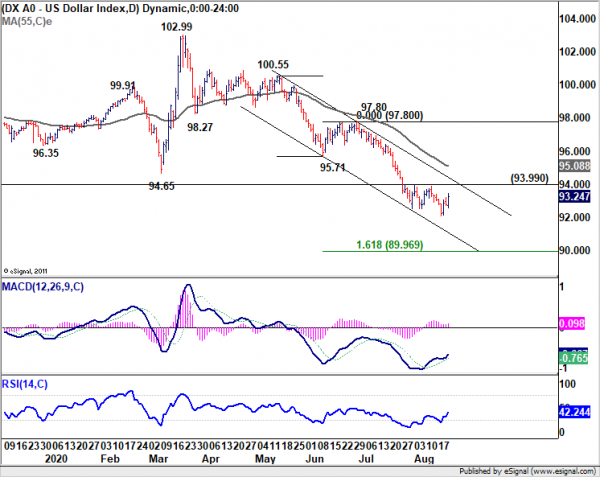 US 10-year yield gyrated lower last week and closed below 55 day EMA (now at 0.652). The development argue that prior week’s rebound was as short-lived as the one in June. TNX might dip further lower to 0.5 handle and below for the near term. Nevertheless, some bullish development could be around the corner considering the descending triangle pattern. A break above 0.727 resistance could be a prelude for longer lasting near term rally through 0.957. Below that happens, any rally in Dollar could limited and be corrective in nature. 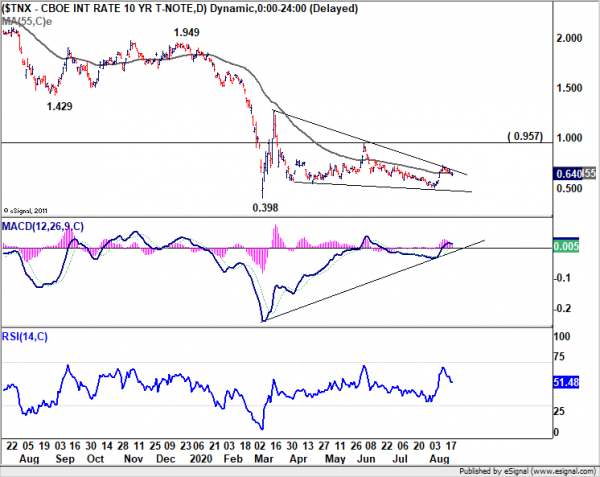 Gold extending consolidation from 2075.18 with another down leg 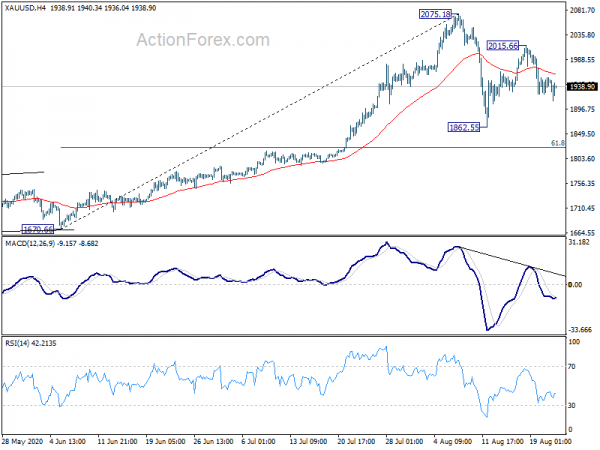 While US stocks were making record highs, Chinese stocks would be a major risk for the near term, in particular for the Aussie. The Shanghai SSE appeared to be rejected by 3458.79, as well as key resistance zone around 3500. Near term bias is mildly on the downside for a take on 55 day EMA 3229.14, to extend sideway consolidation. Outlook will stay bullish as long as 3174.65 support holds. But a firm break there could indicate larger trouble ahead. 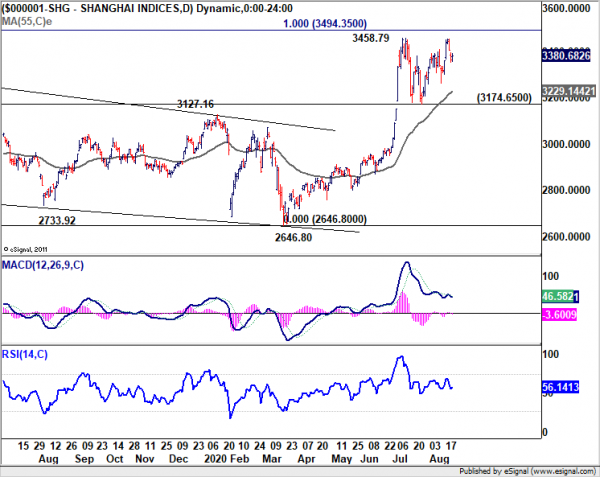 EUR/JPY’s decline from 126.75 accelerated lower last week but stays above 124.31 support so far. Initial bias remains neutral this week first and further rise could be seen. Break of 126.75 will resume the rally from 114.42. However, considering bearish divergence condition in daily MACD, firm break of 124.31 should confirm short term topping. Intraday bias will be turned to the downside for 55 day EMA (now at 123.03), to correct the rally from 114.42. 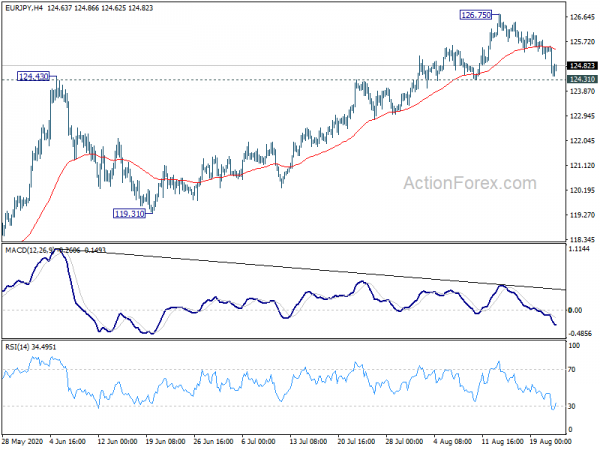 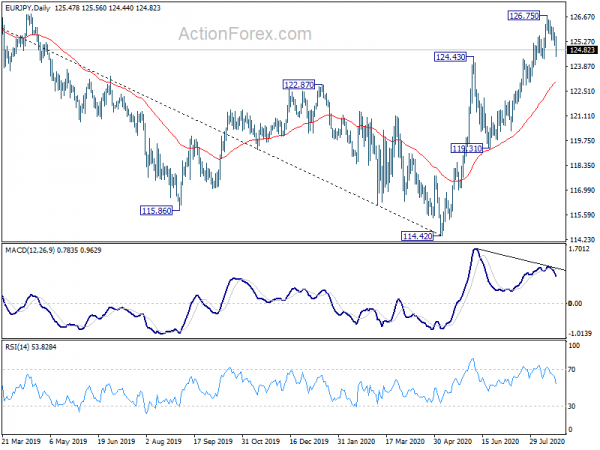 In the long term picture, EUR/JPY is staying in long term sideway pattern, established since 2000. Sustained break of 55 month EMA (now at 124.54) should confirm the start of another medium term rising leg. 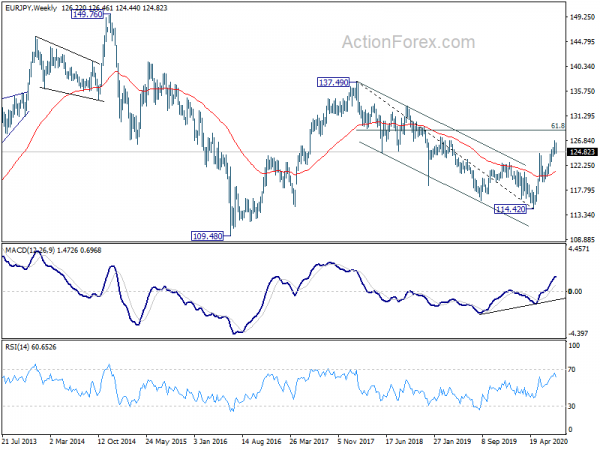 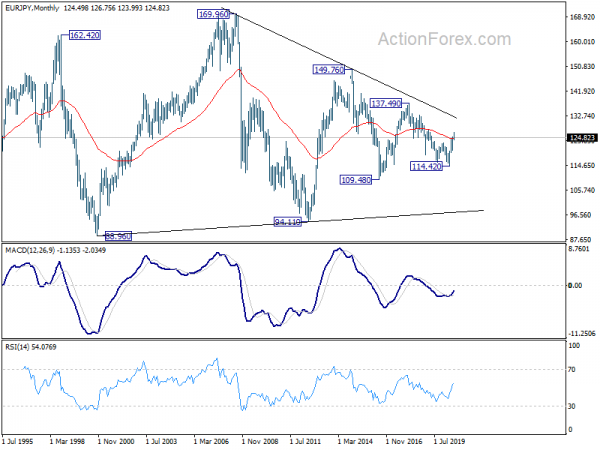