Sterling ended the week as the best performing one. But the late selloff, and rejection by resistance against Dollar and Yen, suggest that the latter too were in the driving seat. Weakness was apparently see in Euro, New Zealand Dollar, and to a lesser extent Australian. Dollar could be further building up the case for stronger near term rebound. But some more technical levels need to be taken out to confirm.

Overall markets were pretty mixed though, acting like something are turning the corner. US President-elect Joe Biden’s new stimulus package triggered no bullish response from stock investors. But the late pull back didn’t warrant a deep correction yet. At the same time, persistent strength was seen in Asia, in particular in Nikkei and HSI. US yields failed to accelerate through channel resistance sustainably, but there is no sign of topping. Gold tried to recover but lacked follow through buying.

Dollar index managed to extend the recovery from 89.20 last week and closed at 90.77, mainly thanks to the pull back in EUR/USD. The condition of a stronger near term rebound is building up. Decisive break of 91.01 resistance and sustained trading above 55 day EMA (now at 91.11) should confirm short term bottoming at 89.20, just head of 88.25 support, on bullish convergence condition in daily MACD. Stronger rally would than be seen back towards 94.74 resistance. 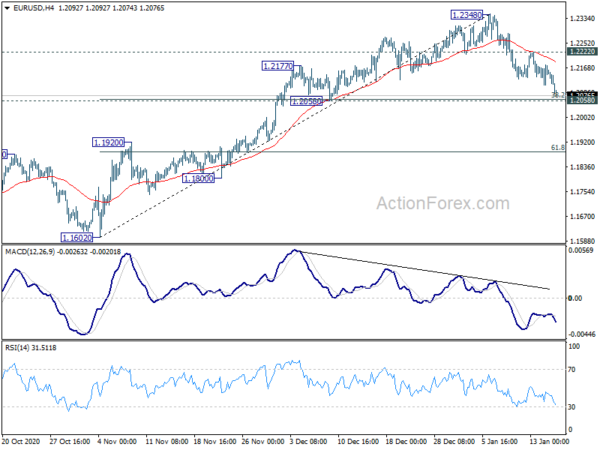 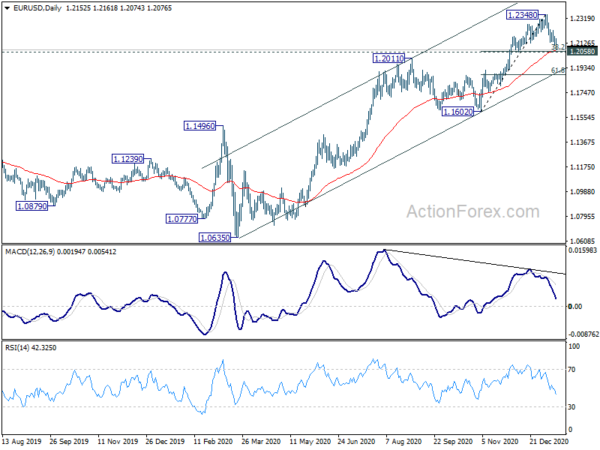 Judging from the overall strength of Dollar, we’re not expecting a break mentioned 1.2058 cluster support in EUR/USD. But from the perspective of Euro’s weakness, that might actually happen. In particular, EUR/JPY broke its trend line support firmly last week, and accelerated downward. Decline from 127.48 should take on 38.2% retracement of 121.63 to 127.48 at 125.24 in the early part of this week. Firm break there could at least bring deeper correction to 61.8% retracement at 123.86. That could solidify Euro’s selloff against the greenback too. 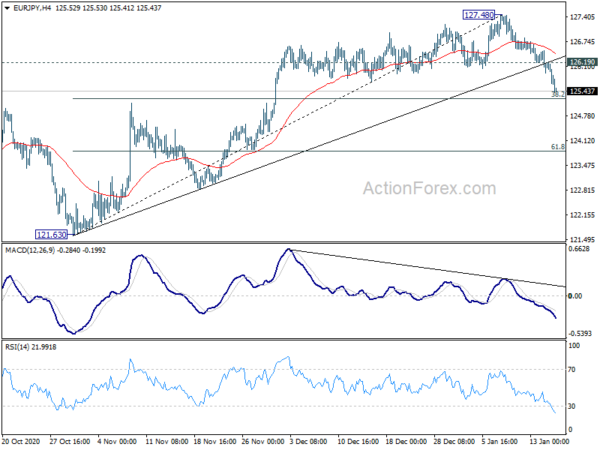 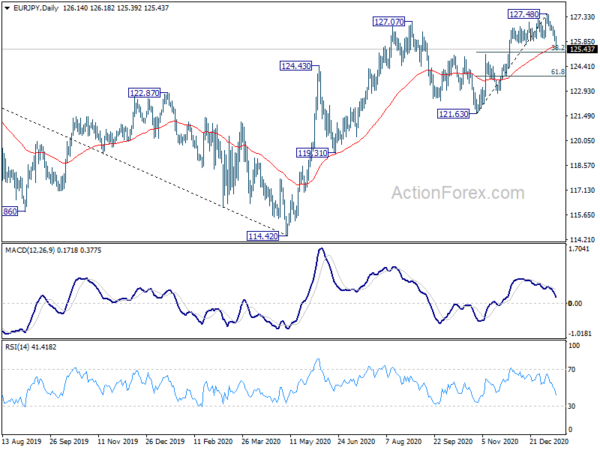 At this point, AUD/USD is holding above 0.7641 support. USD/CAD is also holding below 1.2834 resistance. Hence, NZD/USD’s decline could still be viewed as a move of its own. But a break of 0.7037 fibonacci level could also argue that NZD is the leading one in a broad based pull back in commodity currencies. 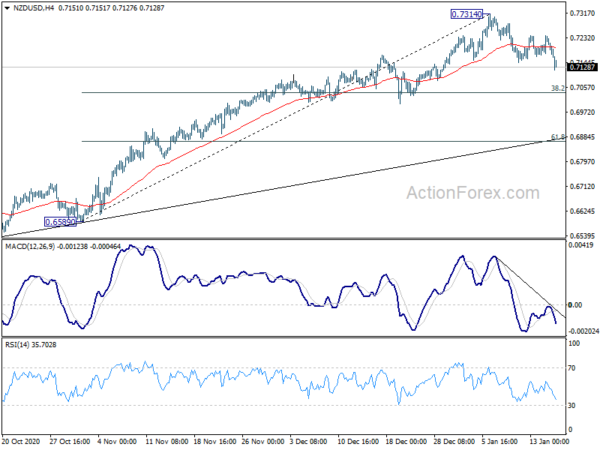 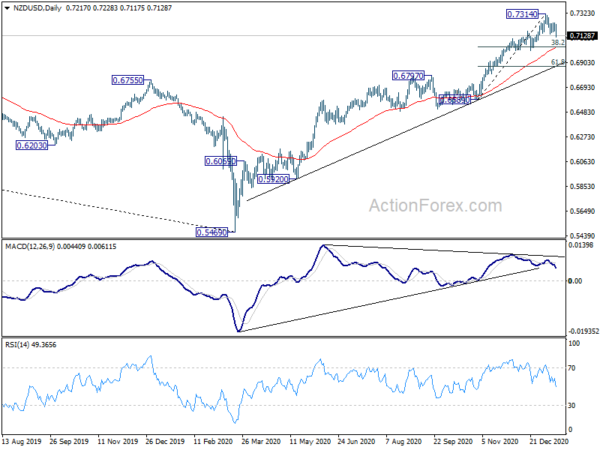 To gauge the chance of a Dollar rebound, we’ll also continue to look at the development in Gold. Gold edged lower to 1871.05 last week but recovered since then. More consolidations could be seen, but even in case of another rise, 4 hour 55 EMA (now at 1867.05) should limit upside. Break of 1817.05 should target 1764.31 and below, to extend the whole correction from 2075.18. That, if happens, should affirm Dollar’s strength. 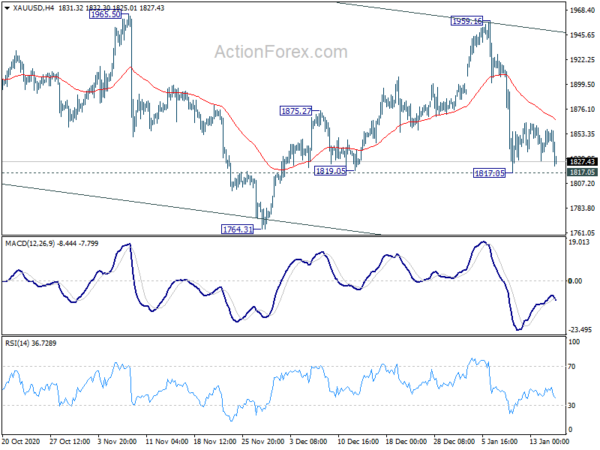 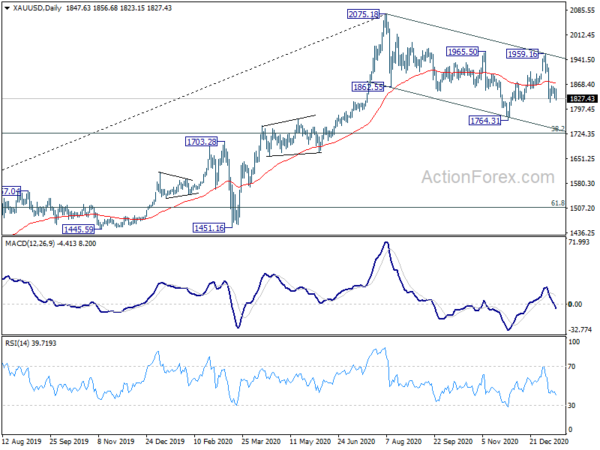 USD/CHF stayed in tight range below 0.8919 last week and outlook is unchanged. Initial bias remains neutral this week first. On the upside, decisive break of 0.8919 should confirm short term bottoming at 0.8756, on bullish convergence condition in 4 hour MACD. Considering bullish convergence condition in daily MACD too, USD/CHF could be corrective whole fall form 0.9901 in this case. Intraday bias will be turned back to the upside for 38.2% retracement of 0.9901 to 0.8756 at 0.9193. Though, break of 0.8821 minor support will bring retest of 0.8756 low instead. 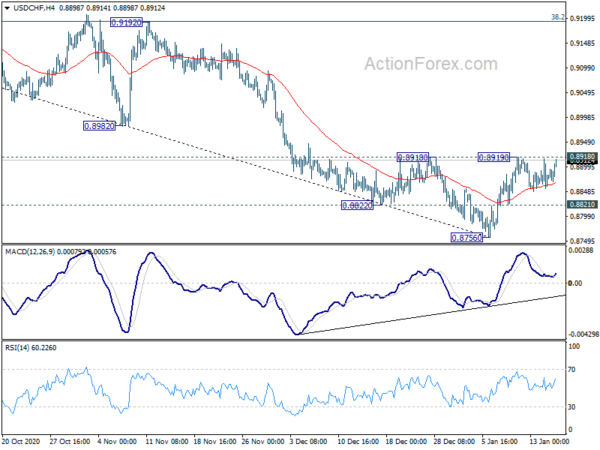 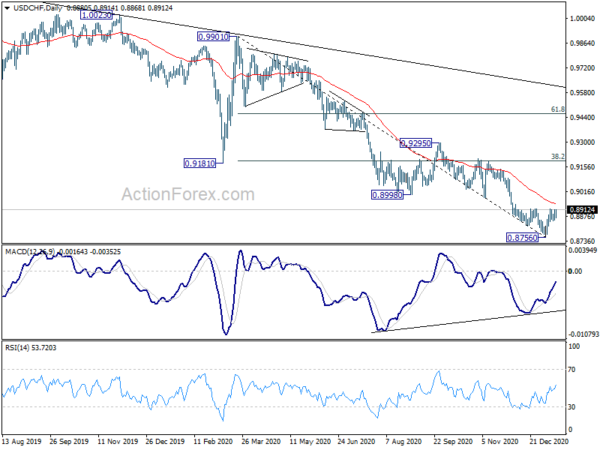 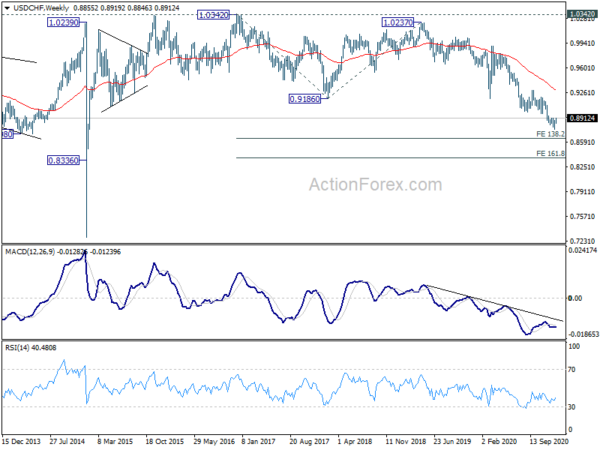 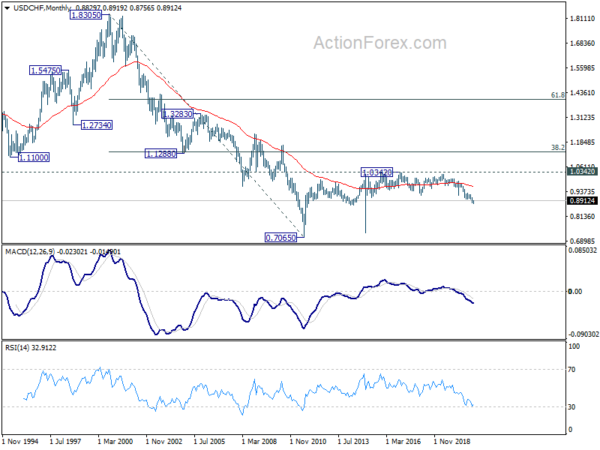