Swiss Franc and Euro ended as the strongest ones last week, as investors reversed their short positions accumulated in Q1. In particular, such reversals pushed Sterling to be the worst performing one, suffering heavy pressure against both Euro and Franc. The outlook for European looked a bit less pessimistic on a couple of factors. But technically, Euro still has a lot to prove that it’s coming back.

On the other hand, as risk-appetite came back, there wasn’t much apparent selloff in Yen, nor was there apparent buying in highly risk-correlated commodity currencies. Australian Dollar was indeed the third weakest for the week, just next to Dollar. Canadian Dollar ended mixed despite a very strong job report. The forex markets might need to take some more time to realign themselves with the risk markets.

Euro made a strong come back last week, as markets started to reverse the overly pessimistic trades back in Q1. On the economic front, latest PMIs suggested that the recent lockdowns were weathered well. Businesses had been increasingly adapted to life with the coronavirus. Financing conditions also improved with stabilization in treasury yields, with ECB started to conduct the PEPP purchases at significantly faster pace.

One of the negative factors for Euro since the start of the year was that EU had significantly lagged behind the US and UK on vaccine rollouts. Though, production was give a boost with the approval of new BioNTech-Pfizer, Moderna and AstraZeneca manufacturing sites. EU appears to be back on track to vaccinate 70% of adult population by the end of Q2. Infections in some countries like Franc had also started to trend down. 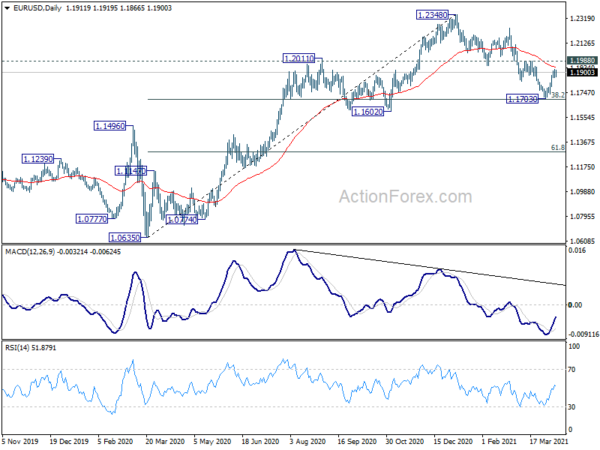 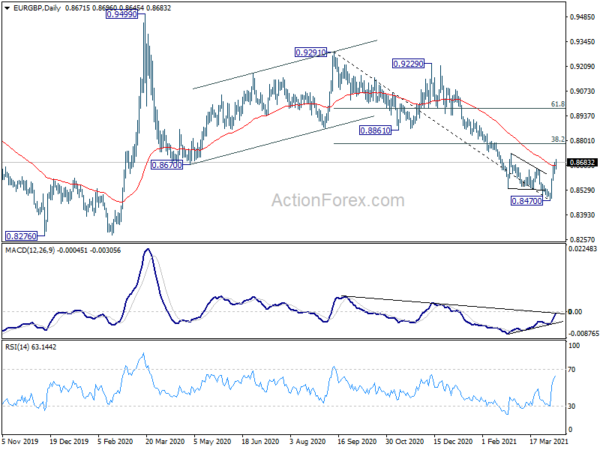 Finally, to full convince us of underlying strength in Euro, EUR/CHF will have to complete the corrective pattern from 1.1149, with a strong upside breakout, to resume the up trend from 1.1503. But judging from last week’s decline, the corrective pattern might still take a week or two to finish, with a brief test on 55 day EMA (now at 1.0977). 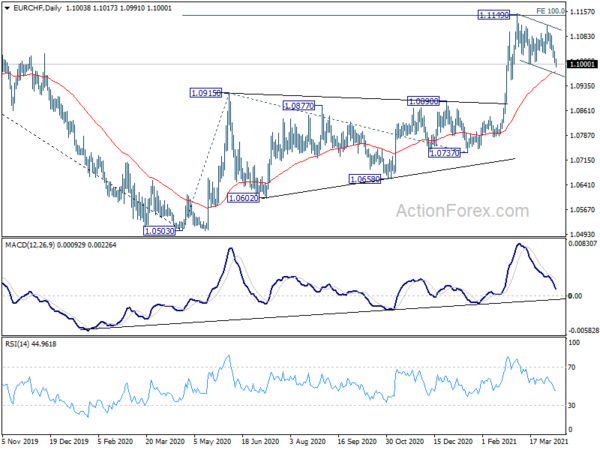 But there was no apparent selloff in Dollar or Yen, or buying in Aussie or Kiwi, on the risk on developments. AUD/JPY continued to struggle in corrective pattern from 85.43. At this point, there is indeed still risk for deeper fall through 82.27 support as the third leg of the corrective pattern extends, towards 38.2% retracement of 73.13 to 85.43 at 80.73. 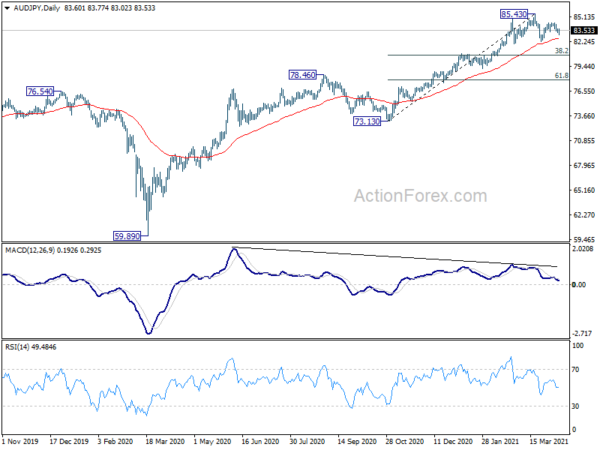 CAD/JPY was a better performing one last week, comparing to AUD/JPY. Yet, the stellar job report, as well as risk-on environment, were not enough to push it through 88.28 short term top. Consolidation from 88.28 could still extend further, and one more fall through 86.05 support to 55 day EMA (now at 85.22) cannot be ruled out. Overall, it appears that the forex markets might need to take some time to realign themselves with the risk markets. 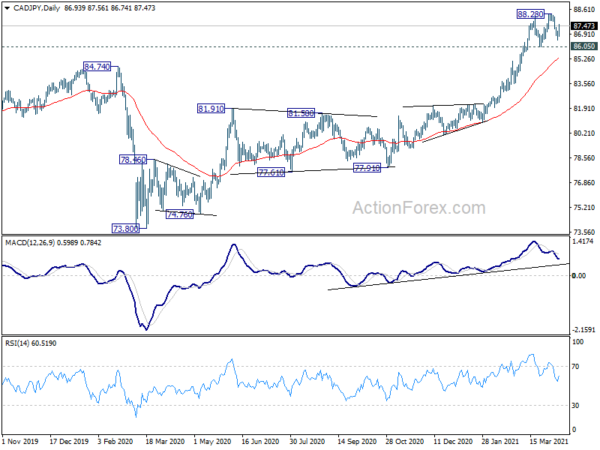 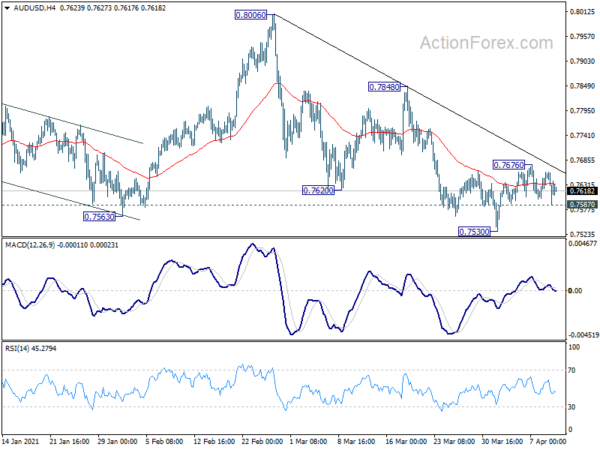 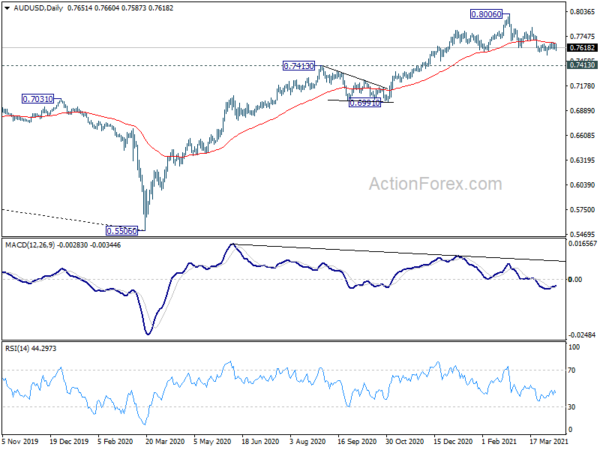 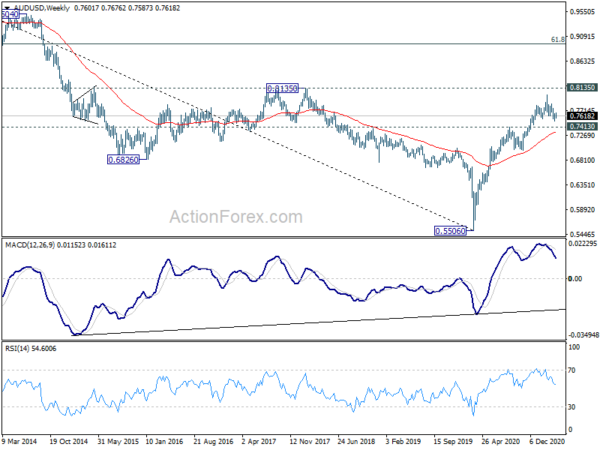 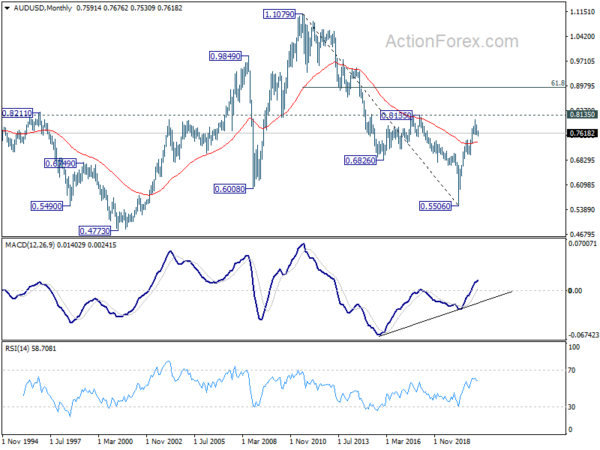