Investors seemed to have already put Omicron risks behind last week, with markets turned back into risk-on mode. But the forex markets were indeed quite mixed. Commodity currencies were the strongest ones, but the rebounds are looking more like corrective. Yen was the worst performer, but the pull-backs were very shallow

Dollar remain stuck in range against European majors and Yen, despite multi-decade high CPI reading. Sterling was pressured for a while on return to pandemic restrictions, but there was no follow through selling. The markets would probably need to see something noticeable from the central bank meetings (Fed, SNB, BoE, ECB, BoJ) this week to set the tone for the rest of the year.

S&P 500 ready to resume up trend after record close? 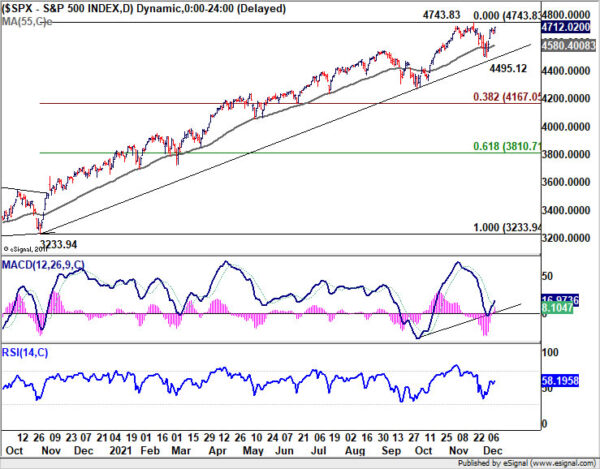 Positive sentiment was also reflected in the rebound in WTI crude oil. It should have made a short term bottom at 62.43, after defending 61.74 key support level. But it’s also too early to say that it’s reversing the whole fall from 85.41, rather than correcting it. As long as 55 day EMA (now at 75.24) is limiting the rebound, we’d expect at least one more take on 61.74 support.

Yet, sustained trading above 55 day EMA will pave the way to retest 85.41 high, which will be another sign of positive market sentiment. 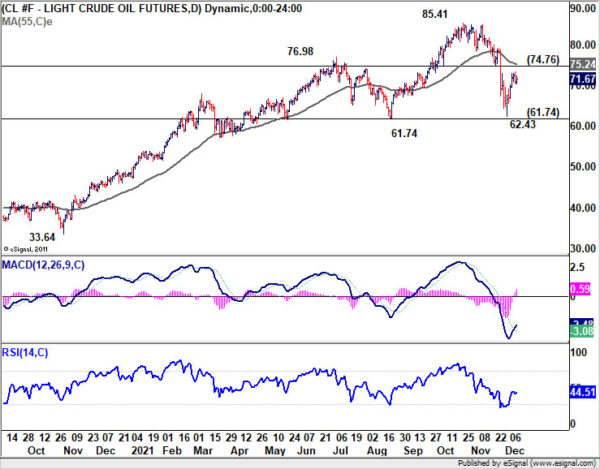 AUD/JPY’s correction not finished despite rebound

AUD/JPY’s rebound last week suggests that a short term bottom was formed at 78.77. While some more upside is likely for the near term, strong resistance could be seen at around 55 day EMA (now at 82.24), to limit upside. 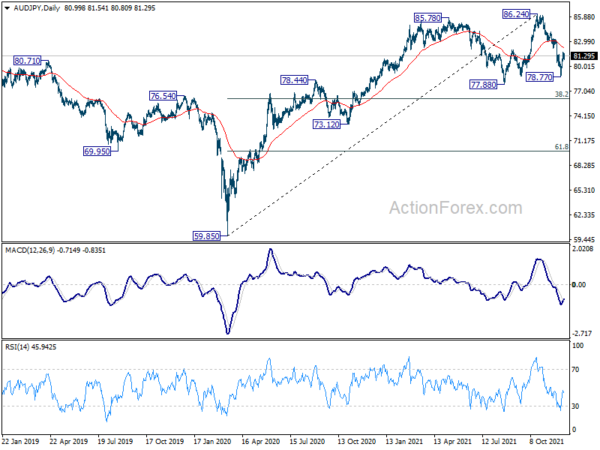 EUR/GBP to look into ECB and BoE

EUR/GBP would be an interesting one to watch this week with BoE and ECB featured. In particular, either a rate hike or not, markets could see BoE decision as a surprise. 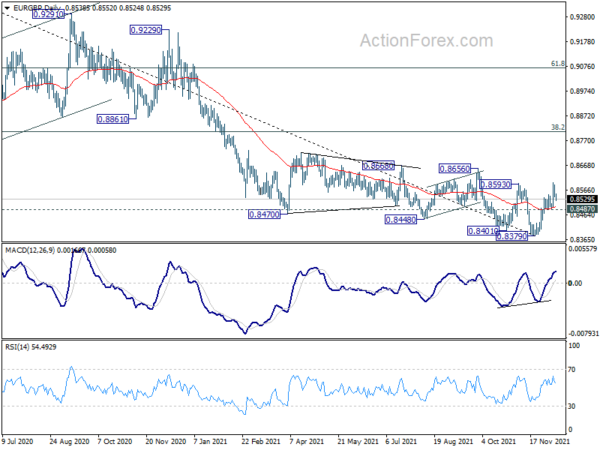 On the other hand, USD/JPY will looking into Fed’s decision and projection to guide a range break out (BoJ will likely be a non-event). The question is now much faster Fed would adjust the tapering plan to, and the pace of rate hike as indicated in the new dot plot. And of course, subsequent reactions in risk sentiment. 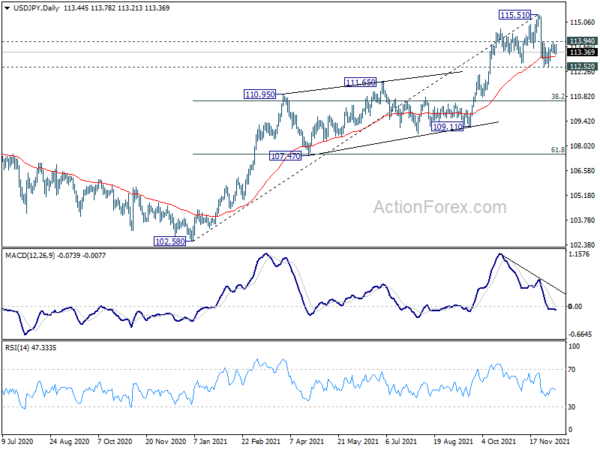 USD/CAD dropped to 1.2604 last week but quickly rebounded. Initial bias remains neutral this week first. On the upside, break of 1.2742 minor resistance will retain near term bullishness and bring retest of 1.2852 first. Break there will resume whole rise from 1.2286 to retest 1.2894/2947 resistance zone. On the downside, however, firm break of 1.2604 will argue that rise from 1.2286 has completed. Deeper fall would be seen back to 1.2286 support. 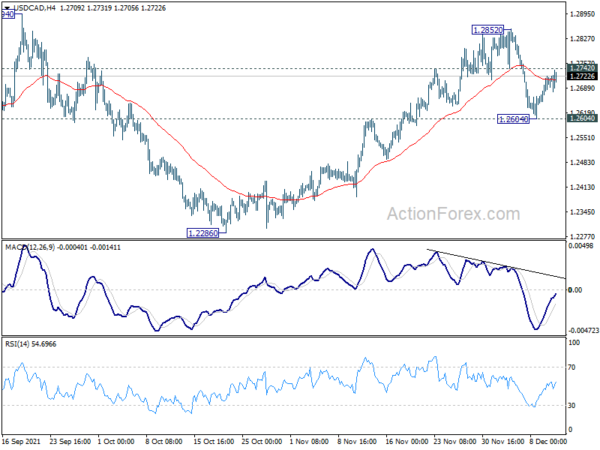 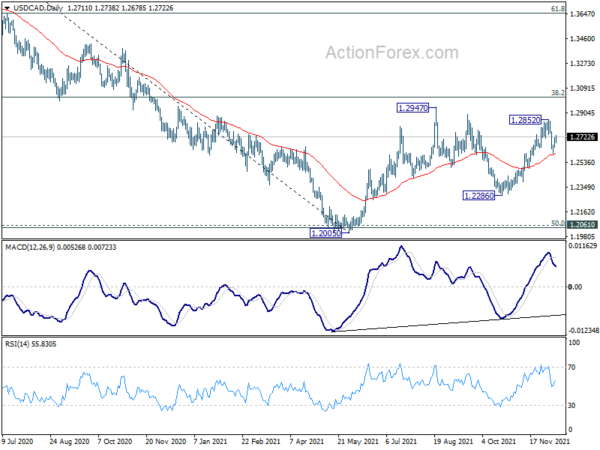 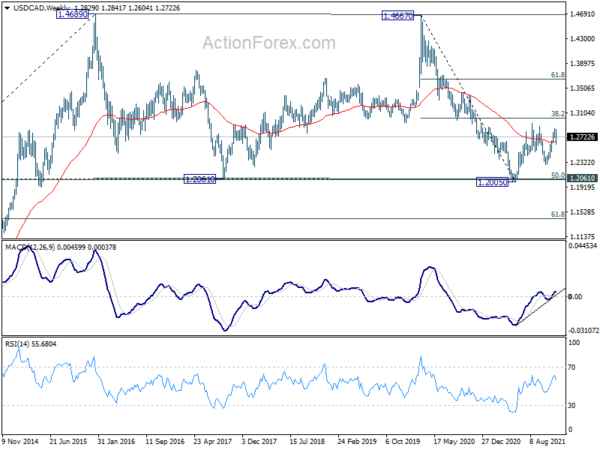 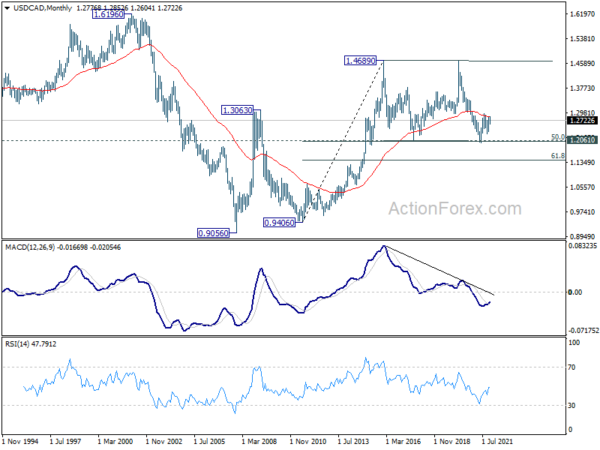