Yield Curve Inversion and Recession Risks, Dollar the Worst Performer of the Week

Dollar ended as the worst performing one last week. Selloff somewhat intensified on Friday after poor PMIs indicated that the US economy was already in contraction. Deep fall in benchmark treasury yields dragged down the greenback while traders were betting on a lower terminal rate in Fed’s tightening cycle. Canadian Dollar was the second weakest, followed by Sterling.

Euro received just very brief lift from the larger than pre-committed rate hike by ECB and ended mixed. Even Swiss Franc was stronger, as Eurozone PMIs also raised recession risks. But Yen jumped towards the end of the week, in particular against Dollar, on falling yields. But Aussie managed to secure to first place.

Yield curve inversion and Fed to be the focuses

Yield curve inversion in the US has been a topic in the past few weeks. It will certain come back into spotlight again this week, after Friday’s steep fall in 10-year yield to close at 2.783, comparing to 2-year yield at 2.991. 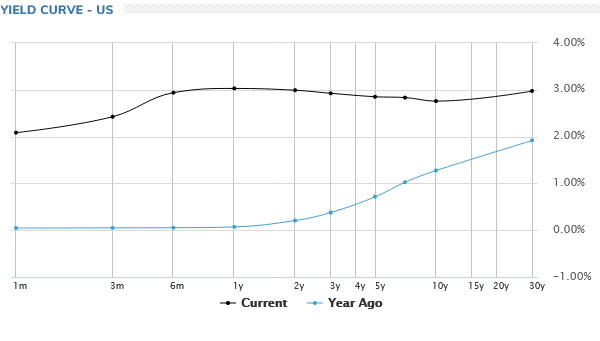 When it comes to the predictive power of recession, there are always three parameters to consider. It’s which part of the yield curve, the depth, and then the duration of the inversion.

As for the depth of the inversion of the 2-year to 10-year yield, it now surpassed that during 2006, prior to the global financial crisis in 2008-9. In terms of duration, 3 weeks are considered a little short, but there is no sign of improvement.

Some economists believed that the curve of 3-month to 10-year yield is the most recession predictor. With 3-month yield currently at 2.425%, this part of the curve remains pretty safe. 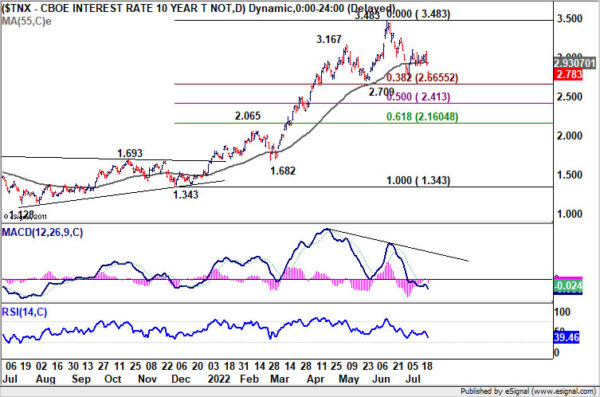 As for Fed, markets are now pricing 80.5% chance of another 75bps hike on July 27 this week. There is little chance of an upside surprise there, after the very poor US PMI data last week, which was already indicative of -1% annualized GDP contraction. The question now is Fed Chair Jerome Powell’s view on recession risks, as well as any indication on a slowdown in tightening pace from September and onwards. 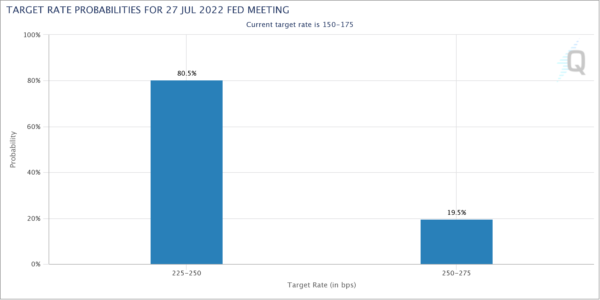 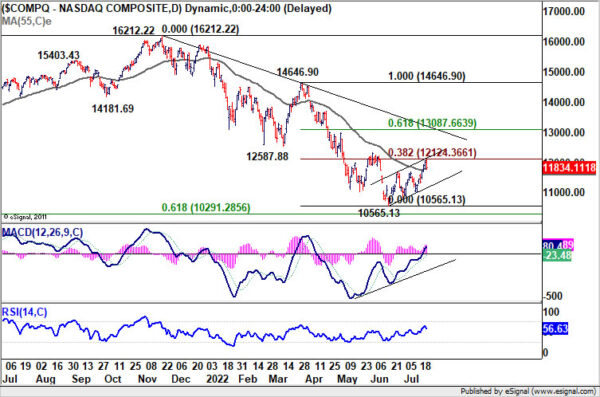 Dollar index’s decline last week should have confirmed short term topping at 109.29. That came as the greenback was dragged down by falling US benchmark yields. Additionally, traders were probably already pricing in a lower terminal rate in the current tightening cycle of Fed.

Initial support was found at 38.2% retracement at 101.29 to 109.29 at 106.23. Stabilization at the current level should help set the range of a relatively brief near term consolidation. However, should 10-year yield break through above mentioned 2.66/70 support zone, it’s highly likely that DXY will follow and target 55 day EMA (now at 104.72), which is inside 101.29/105.00 support zone. Such development, if happens, could mean that Dollar index has already started a medium term correction, which could last much longer and extend deeper. 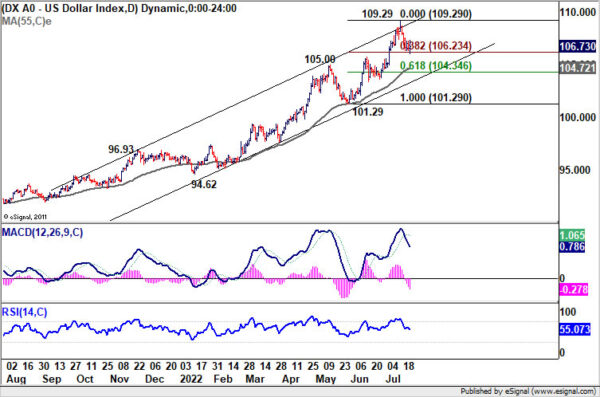 EUR/USD struggled to extend the rebound from 0.9951 last week, despite ECB’s surprised 50bps rate hike. Yet, retreat from 1.0227 was shallow, keep more upside in favor. The key resistance is 1.0348 support turned resistance. Firm break there will raise the chance of medium term bottoming at 0.9951, after defending parity, and put channel resistance at 1.0514 in focus. Such development could come if 10-year yield break through the above mentioned 2.66/70 support zone, or with any downbeat warning from Fed Powell. 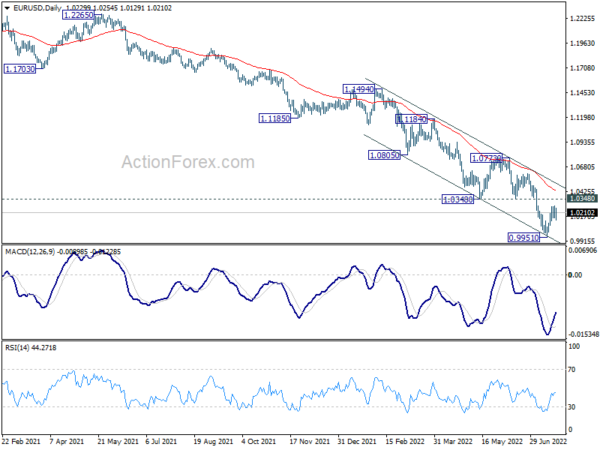 At this same time, while it’s still early to conclude, the risk of a deeper medium term correction in USD/JPY is growing. Bearish divergence condition in daily MACD is already a bad sign for the pair. Break of 134.73 support would likely send USD/JPY through 55 day EMA (now at 133.37) into 126.35/131.34 support zone. Such development could come as Yen responds more than Dollar to the next risk-off selling in stocks, as well as deeper pull back in benchmark yields. 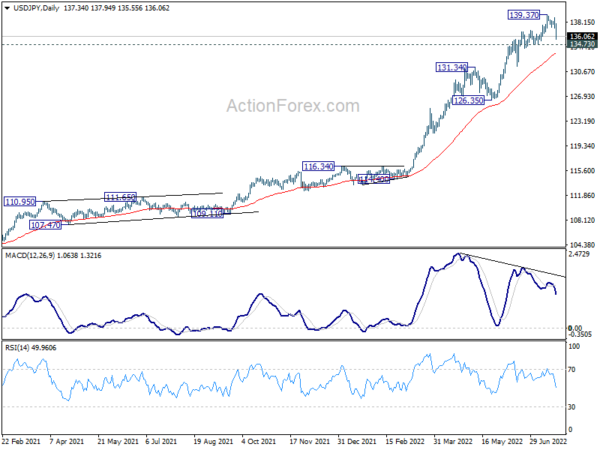 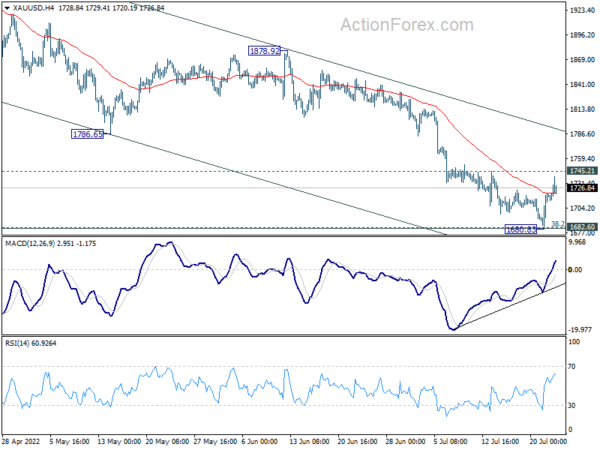 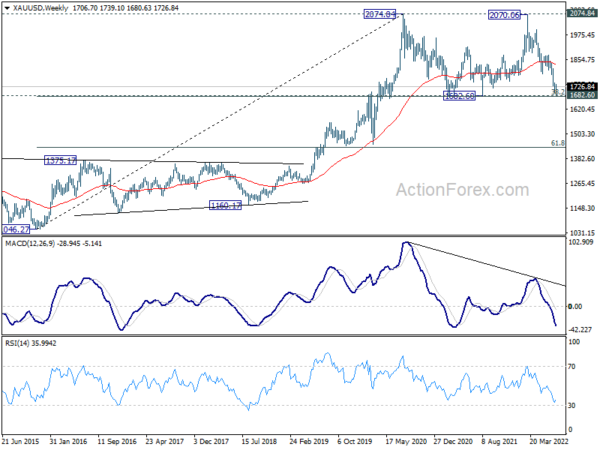 EUR/CHF’s recovery was capped by 0.9953 minor resistance last week, but stayed above 0.9804 low. Initial bias remains neutral this week and further fall is expected. On the downside, break of 0.9804 will resume larger down trend. Next target is 0.9650 long term projection level. On the upside, however, break of 0.9953 minor resistance will suggest short term bottoming, and bring stronger rebound to 55 day EMA (now at 1.0097). 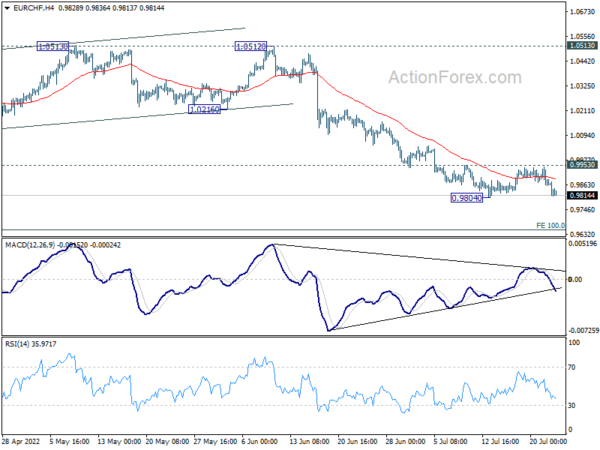 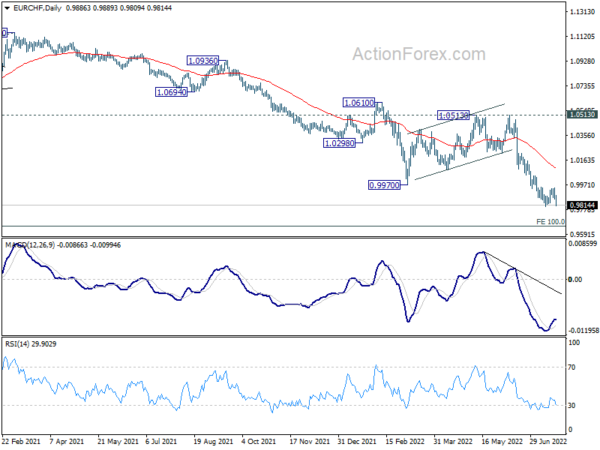 In the long term picture, capped below 55 month EMA, EUR/CHF is seen as extending the multi-decade down trend. There is no prospect of a bullish reversal until some sustained trading above the 55 month EMA (now at 1.0808). 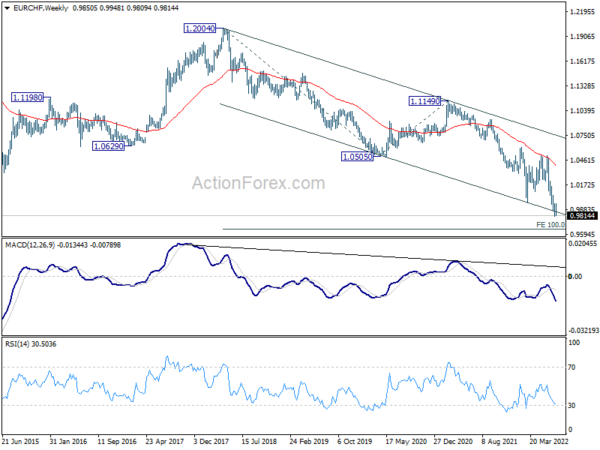