There were some conflicting movements in the markets last week. Risk appetite was clearly strong in US and Europe. S&P 500 and NASDAQ ended at record highs and DOW was not far from it. Dollar was firm as investors finally got some more details about the long awaited tax reform. Treasury yield also jumped as markets were getting more confident on the bet of December Fed hike. However, the greenback was overshadowed by Swiss Franc, which ended as the strongest one for the week. Dollar was only the second best performer. Yen also ended the third strongest ones. The decoupling of risk sentiments with Swiss Franc and Yen could be partly seen as the results of quarter end position squaring. Or, it’s a sign that Dollar strength was indecisive due to lack of confidence over the tax plan.

Meanwhile, Euro dipped broadly except versus Aussie and Kiwi. Some attributed the weakness in Euro to the political uncertainties after German Election. However, the strong gains in DAX and CAC 40 argue that investors were not worried at all. Profit taking in Euro, against Dollar and Yen, was likely the main driver in Euro’s weakness instead. Also traders were starting to get cautious ahead of ECB meeting in October, when re-calibration of monetary stimulus would be announced. On the other hand, strength in Sterling was not too apparent even though BoE Governor Mark Carney affirmed the chance of a November hike. And FTSE also closed higher following other major European indices, in spite of lack of progress in Brexit negotiation and expectation of rate hike. It’s something that is worth close attention.

Price actions in commodity currencies were closer to what one could expect. Canadian Dollar lost ground as BoC Governor Stephen Poloz reminded the market that it’s not on autopilot for rate hike. RBA is clear that it’s in no hurry to raise interest rates. New Zealand Dollar was weighed down by dovish RBNZ and indecisive election results. Also, performance of Asian stock markets lagged far behind Europe and US.

S&P 500’s (SPX) long term up trend continued last week and closed at new record high at 2519.36. Medium term upside momentum remains unconvincing with bearish divergence condition in weekly MACD. The proximity to long term channel resistance is giving some weight to the index. But after all, outlook will remain bullish as long as 2417.35 support holds. We’d monitor if the index will follow the path of the channel resistance, or if there will be upside acceleration that power it through. In the latter case, next fibonacci level at 100% projection of 1074.77 (2011 low) to 2134.71 (2015 high) from 1810.10 (2016 low) at 2870.04 will be reachable.

10 year yield (TNX) also staged a strong rally last week and the break of the medium term trend line resistance suggests that corrective pull back from 2.621 is already completed at 2.103 already. Further rise is now expected in near term to 2.396 resistance. Firm break there will affirm this bullish case and target a test on 2.621 high. And in that case, the long term rise from 1.336 will likely be resuming for next key level at 3.036.

However about FTSE 100 in UK? The index performed well last week too even though there was no progress in Brexit negotiation. And BoE now looks quite firm to hike in November. The index extended recent rebound to close strongly at 7372.75. Pull back from 7598.99 high was also held above 55 week EMA. It’s not as bullish as DAX and CAC. But further rise is mildly in favor in near term to 7460.52 resistance. Break will likely resume the long term up trend through 7598.99 high.

Regarding trading strategy, we bought CAD/JPY at 89.90 last week as it dipped to 89.81. Price actions from 91.62 are seen as a consolidation pattern. While Canadian Dollar retreated on BoC head’s comments, there is no change in the central bank’s tightening path. It’s just a matter of how frequent rates hike would be. Also, based on strong risk appetite, we’d expect Yen to be back under pressure after it’s recovery completes. Hence, we’ll stay long in CAD/JPY, with stop put at 88.50. We’d expect another rise to 61.8% retracement of 106.48 to 74.80 at 94.37 as first target. 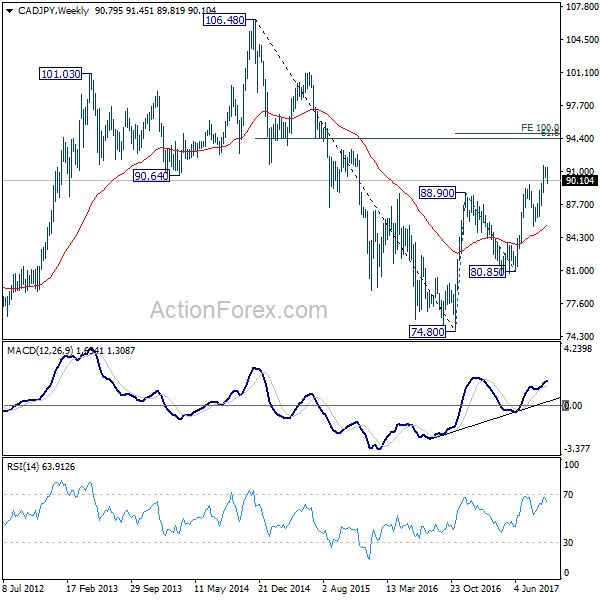 The story for Aussie is totally different as RBA is not expected to hike another time soon. There is also worries over China’s debt problem in the background. And Asian stocks clearly lagged behind European and American. Therefore, we’d look for opportunity to sell Aussie. At this point, while the case for a Dollar reversal is building up, there is no confirmation yet. And Euro is still expected to rally again after its pull back completes. Therefore, we’ll try to buy EUR/AUD on break of 1.5173 resistance. with 1.6587 as target. 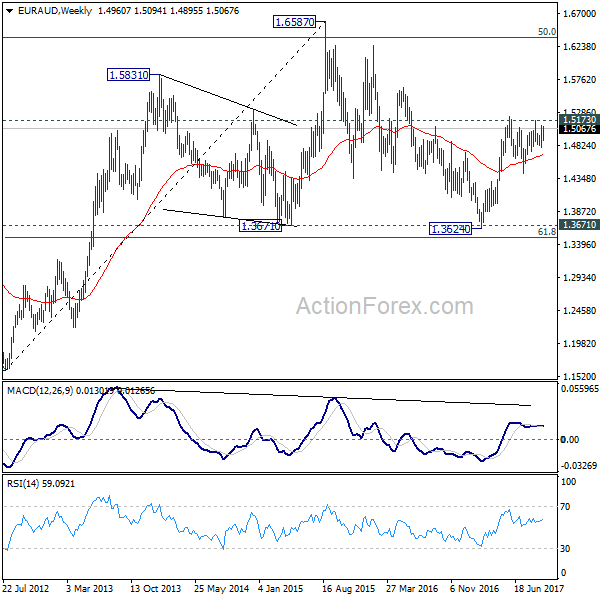 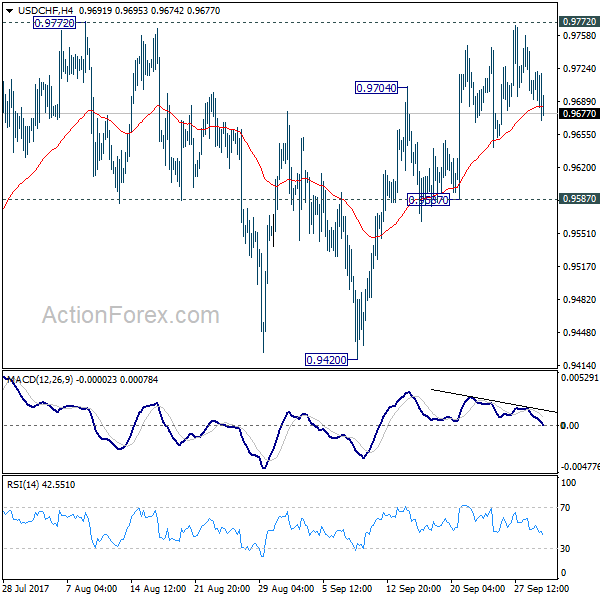 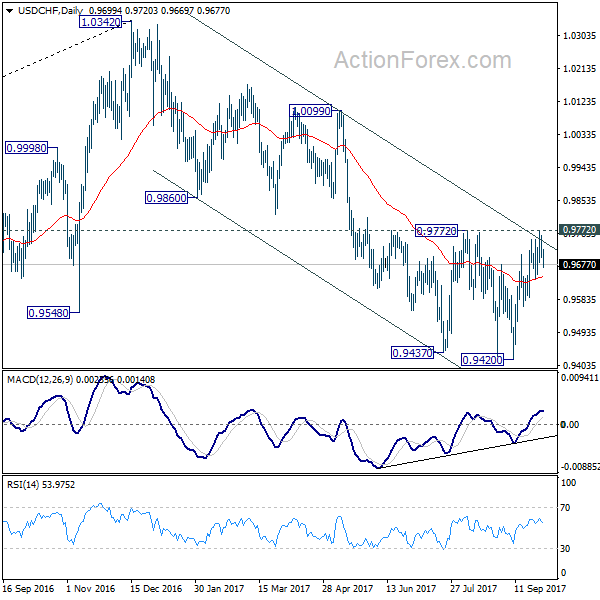 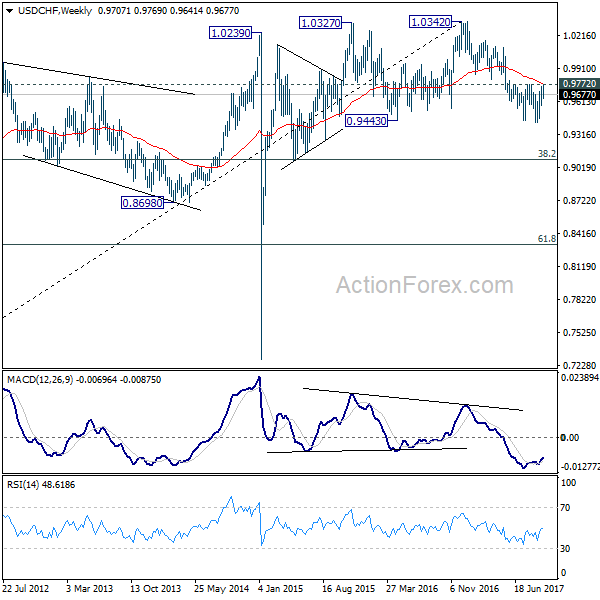 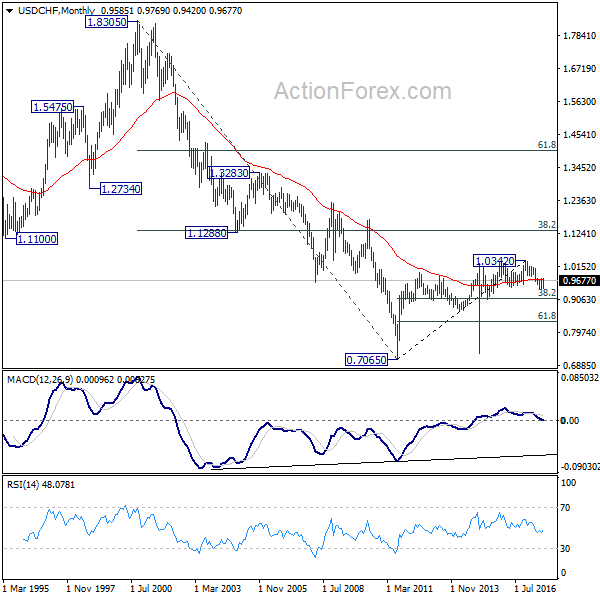