Dollar closed broadly higher last week, and closed as the strongest as boosted by a couple of factors. Firstly, House approved Senate’s version of budget blueprint, and cleared an important procedural step for getting the tax cuts done by the end of the year. Secondly, markets responded positively to news that Fed chair Janet Yellen is out of the race for a renewal. Instead, Fed Governor Jerome Powell and Stanford University economist John Taylor are now the front runners. Powell is reported to be slightly more favored by US President Donald Trump and is seen as a less hawkish candidate. But after all, there is still a possibility of Powell/Taylor combination for chair/vice of Fed. And either one seems to be more welcomed by the markets than Yellen. Thirdly, Q3 GDP came in at an impressive 3% annualized growth, despite the impacts of hurricanes.

Euro weighed down by ECB and Catalonia

Euro, on the other hand, suffered deep selling after ECB policy decision. And it closed as the second weakest ECB announced to half monthly asset purchase to EUR 30b start January, and extends the program by 9 months to end of September 2018. That was indeed in line with consensus. But Euro bulls were unhappy that ECB left the options open for extending and even expanding the asset purchase program again. Stocks, on the other hand, responded positively with German DAX hitting new record high while French CAC 40 hit the highest since 2008. However, Catalonia’s declaration of independence dragged Euro further lower before weekly close. We might see European markets in risk averse mode in initial trading this week.

Commodity currencies ended generally lower, with Aussie as the weakest and Canadian Dollar as the third weakest. Australia CPI came in below market expectations and basically ruled out the chance for any RBA rate hike in near term. Meanwhile, BoC gave the markets a rather cautious statement after leaving interest rates unchanged. BoC noted that "Governing Council will be cautious in making future adjustments to the policy rate". Nonetheless, some support is seen for the Loonie as WTI crude oil surged to close at 54.19, setting the stage for testing 55.24 key resistance. There is room for Canadian Dollar to recover this week.

BoJ, Fed, and BoE to meet, non-farm payroll a highlight

Looking ahead, BoJ, Fed and BoE will meet this week. The key focus in on BoE rate hike and vote split. Sterling has been very resilient because of expectation of a 25bps rate hike by BoE. And that was supported by the above expectation 0.4% GDP growth in Q3 released last week. However, the Pound could suffered some steep selling if what BoE delivers this week is seen as a dovish high. Also, it’s Super Thursday time and BoE’s quarterly inflation report will also be closely watched.

Dollar, on the other hand, will look into a string of key economic data, in particular October non-farm payroll. Strong NFP number and wage growth will bolster the case for December Fed hike. And more importantly, Fed is projection three more hikes next year, WITHOUT tax cuts taken into consideration. Solid growth data, come back of inflation, and positive news on tax cuts in the upcoming weeks solidify the cases for Fed.

Dollar’s rally was accompanied by sharp rally in 10 year yield too. TNX finally took out 2.396 key resistance decisively last week. That should confirm that correction from 2.621 has completed at 2.034 already. It’s now very likely that medium term rise from 1.336 is resuming. Near term outlook stays bullish as long as 2..273 support holds. TNX should target a test on 2.621 key resistance first. Break will confirm our bullish view and target 61.8% projection of 1.336 to 2.621 from 2.034 at 2.827. Such development would help lift Dollar.

Regarding trading strategy, our CAD/JPY long (bought at 89.90) was stopped out at 88.50 last week. More dovish than expected BoC statement was a favor. And Catalonia independence was another factor. We’ll stay away from CAD/JPY first.

Meanwhile, we bought USD/JPY at 114.50 at open last week. 114.49 key resistance is so far proving to be strong. Nonetheless, there is no change in our bullish view on Dollar and yield. Hence, we’ll stay long in USD/JPY with a stop at 112.50.

AUD/USD’s decline from 0.8124 resumed last week by taking out 0.7732 already. A temporary low is formed at 0.7624 after hitting 0.7628 fibonacci level. Initial bias is neutral this week for consolidations first. But upside of recovery should be limited well below 0.7896 resistance to bring fall resumption. Firm break of 0.7624 will target next key cluster level at 0.7322/8. 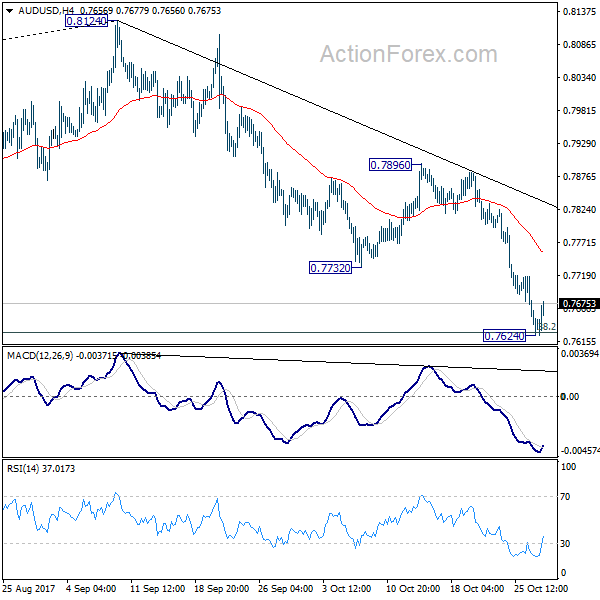 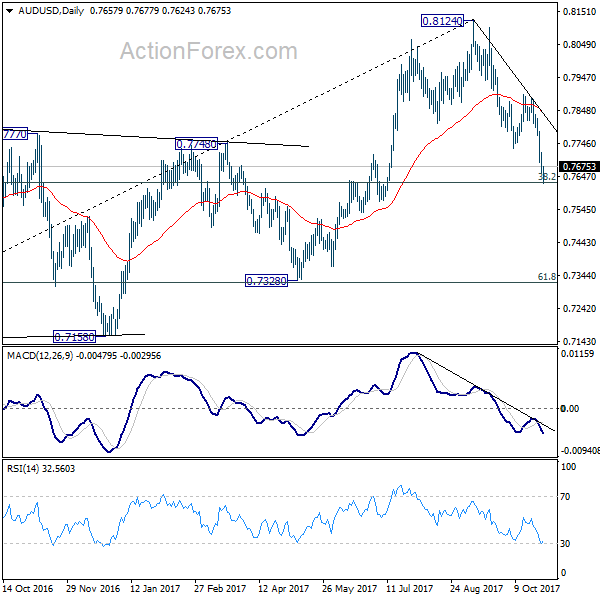 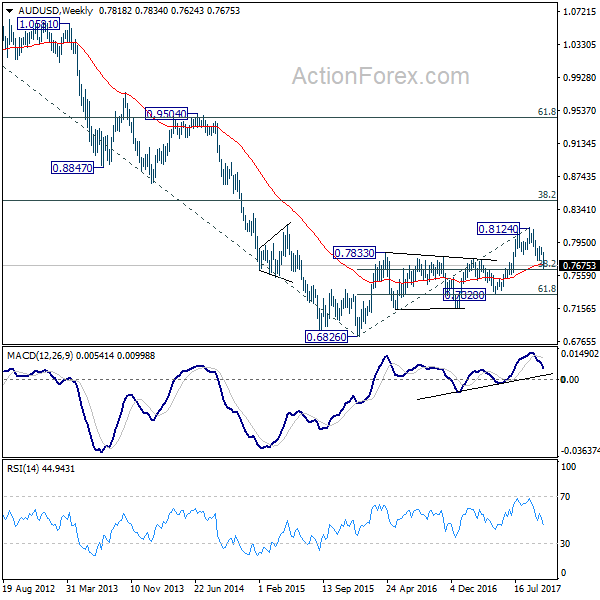 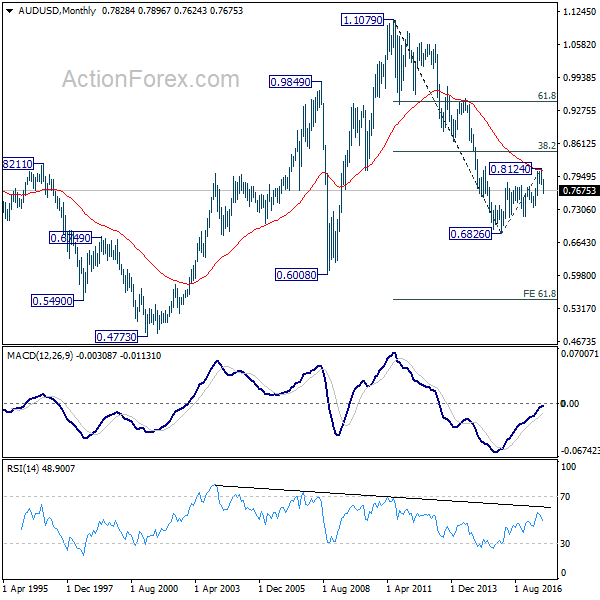