Steep selloff in the global stock markets ended up as the biggest news last week. Some attributed the surge in global yields and stock market declines to the solid non-farm payroll report from US. The headline 200k growth confirmed underlying healthiness in the US job market. And more importantly 0.3% mom rise in average hourly earnings in January, following 0.4% mom rise in December, indicates pickup in momentum in wage growth. The case for Fed to hike three times this year looks more likely than ever. And subject to development, Fed could indeed hike the fourth time in December.

However, we’d like to point out that the NFP report could have triggered acceleration in the moves in stocks and treasury yields. But the move has started much earlier. We’ve pointed out on Jan 31 already (even though just briefly) that DOW started the long overdue correction, heading back towards 25000 handle. TNX broke 2.621 key medium term resistance two weeks ago and we’ve mentioned that it’s picking up momentum on Jan 30. Looking at the charts of FTSE, DAX and SSE below, we can see that that selloffs didn’t start on Friday.

For the moment, the most satisfactory explanation is that investors are finally starting to prepare the end of the era of cheap money globally. As mentioned above, Fed would hike three or even four times this year. There have been repeated calls from ECB officials to announce a clear deadline for asset purchases. Some analysts are starting to predict BoE to pull ahead another rate hike to as soon as May, subject to a Brexit transition deal. BoC has already hiked in January and it’s tightening path, though cautious, is not completed. Are we there yet? Probably. But, as suggested below, technically, 3-3.2% region in US 10 year yield could be the real defining point.

In the currency markets, Swiss Franc ended as the strongest major currency again. We pointed out last week it was very much a surprise to see the Franc that strong, given that DAX just hit a record high. At that time, we didn’t buy into the idea of risk aversion. But now, it turned out that the Franc could have given us a early warning of risk aversion. But then, the weakness in Yen is puzzling. Euro ended as the second strongest one, followed by Dollar. Aussie suffered most, ended as the weakest one, followed by Yen, and the Loonie.

Note that TNX will then also face multi-decade channel resistance (now at around 3.2). That will be the defining moment on whether we have finally left behind the low interest rate and loose monetary policy era.

Looking at the global markets, FTSE’s sharp decline last week also raised the chance of medium term topping at 7792.56, on bearish divergence condition in weekly MACD. Deeper fall is in favor in near term to 55 week EMA (now at 7361.35). Sustained break there will confirm this bearish case. Fall from 77.9256 should then be correcting the whole up trend from 5499.50. And in that case, FTSE should drop through long term channel support to 38.2% retracement of 5499.50 to 6916.61 at least.

The Chinese Shanghai composite also suffered steep selling last week, but it managed to pare back some losses and closed higher on Friday. Nevertheless, it should be noted that the SSE index is very close to key long term fibonacci level at 38.2% retracement of 5178.19 to 2638.30 at 3608.53. Rise from 2638.30 is clearly corrective looking. Risk of reversal is high and a break of 55 week EMA (now at 3289.44) might start another medium term up trend back towards 2638.30 low.

Our AUD/CAD long was stopped out last week, mainly because Aussie was dragged down by AUD/USD’s rejection from 0.8124. We’d now look at opportunities to buy Swiss Franc this week, against European majors, on catching up with other pairs. Judging from the resilience of EUR/GBP above 0.8688 support, we’d give GBP/CHF priority. 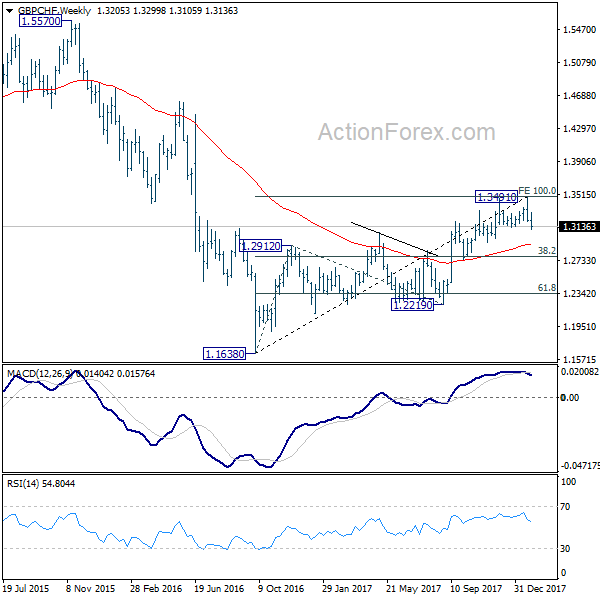 AUD/USD’s sharp decline last week confirmed short term topping at 0.8135, after being rejected by 0.8124 resistance. Initial bias remains on the downside this week for 55 day EMA (now at 0.7851). Sustained break there will argue that rise from 0.7500 has already finished and will bring deeper fall to retest this support level. On the upside, above 0.7986 minor resistance will turn intraday bias neutral first. But recovery will likely be limited below 0.8135 resistance at first attempt.

In the bigger picture, medium term rebound from 0.6826 is seen as a corrective move. It might still extend higher but we’d expect strong resistance from 38.2% retracement of 1.1079 to 0.6826 at 0.8451 to limit upside to bring long term down trend resumption. On the downside, break of 0.7500 support will now be an important signal that such corrective rebound is completed. 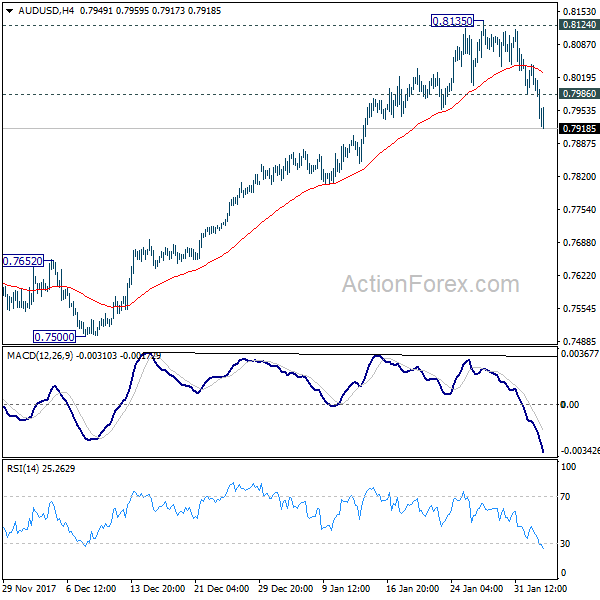 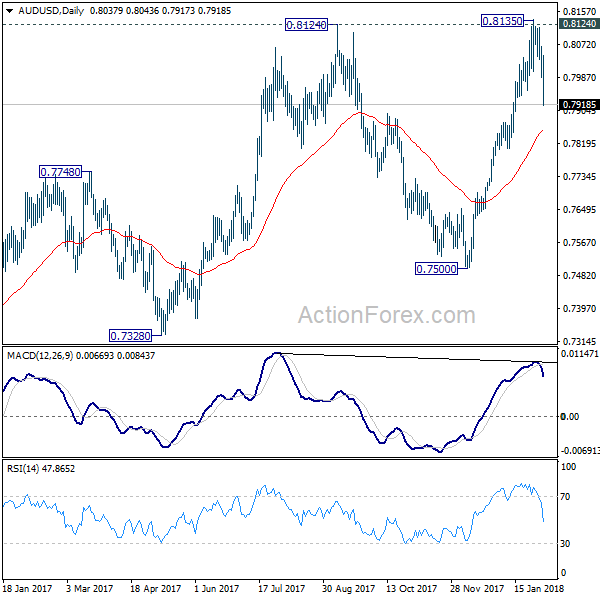 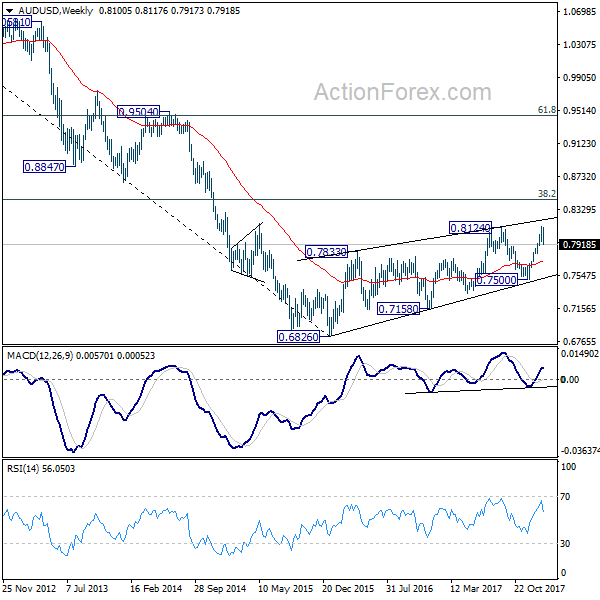 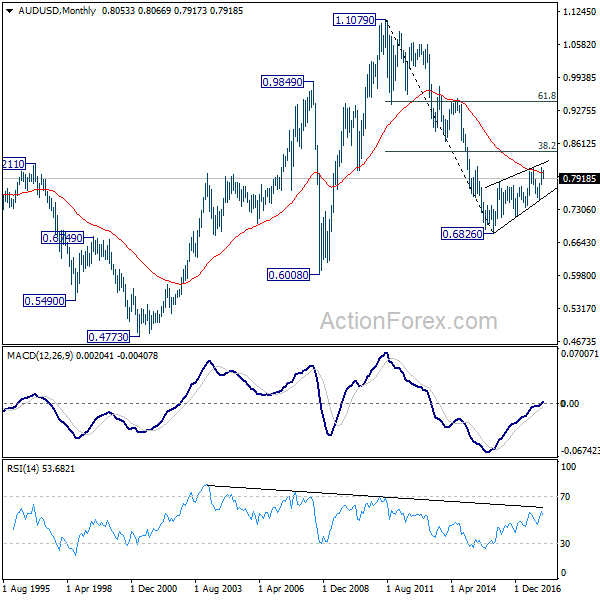