The stock markets in the US ended the week up solidly as boosted by the “perfect” job report as seen by investors. Worries over trade wars also receded as US President Donald Trump has backed down on his steel and aluminum tariff even on the day of its arrival. DOW took out an important near term 25000 handle firmly to closed the week at 25335.74. NASDAQ even closed at record high at 7560.81 as tech giants were back in form. While strength in other global markets were not as apparent, FTSE, DAX and Nikkei did close the week up.

In the currency markets, Swiss Franc and Yen were the weakest ones as markets were in full risk-on mode towards the end of the week. Euro followed as the third weakest. Even though ECB dropped the easing bias in its statement, President Mario Draghi tried to talk down the significance in the post meeting press conference. Dollar also ended the week down except versus Euro, Yen and Swiss. Sluggish wage growth as report in non-farm payroll gave no support for Fed to hike four times this year.

Commodity currencies were generally higher on risk appetite. Canadian Dollar was once the weakest one during the week. But Canada was exempted by US steel and aluminum tariffs subjected to NAFTA negotiation. The Loonie than regained ground. Aussie ended as the strongest, followed by Loonie and then Kiwi.

NFP perfect for stocks, not so for Dollar

According to fed fund futures, markets are pricing in 88.8% change of a March hike, pretty much unchanged. The chance for four hikes by December didn’t change much from a week ago neither.

After Canada, Mexico and Australia, who elsewhere will be exempted from Trump’s tariff?

Trump finally signed the proclamations of 25% steel and 10% aluminum tariff on Thursday. The new tariffs will take effect in 15 days. But even before the press conference, he has already backed down from his original position of no exemption. Canada and Mexico are exempted, pending NAFTA negotiations outcome. These two countries are the first (16%) and fourth (9%) largest of steel importers to the US in 2017. And he opened the door for reduction in or even exemptions from tariffs for countries that are “great partners” and “great military allies”.

It is firstly unsure who is the person to judge which countries are “great partners” and if there will be any objective criteria for that at all. Or it is, in the end, down to Trump to cherry pick the exemption list? EU and Australia are already knocking the door for exemptions. Indeed, on Saturday, Trump has already tweeted he’s going to exempt Australia. Trump could call China being “very helpful” in geopolitical matters with North Korea. Then how about South Korea and Japan, who are much closer to the US in terms on military alliance? South Korea (10%) and Japan (5%) combined contribute to another 15% of US steel imports.

So just Canada, Mexico, South Korea, Japan add up to 40%. If 40% of steel imports is exempted from the tariffs, how is it going to “protect and build our steel and aluminum industries” as Trump declared?

The main takeaway from last week’s ECB meeting was that the following texts were omitted from the statement.

“If the outlook becomes less favourable, or if financial conditions become inconsistent with further progress towards a sustained adjustment in the path of inflation, the Governing Council stands ready to increase the asset purchase programme (APP) in terms of size and/or duration.”

That is, ECB no longer takes expanding the EUR 30b per month asset purchase program as an option. But later in the post meeting press conference, Draghi tried to tone down the change. While the decision was unanimous, Draghi emphasized that it’s just removing “explicit reference” to the chance of increasing the size of the APP again. However, firstly, ECB will keep interest rate at the current level for an extended period after the APP ends. And secondly ECB is still keeping the option to “extend” the APP beyond September.

Euro bulls were clearly dissatisfied with the over messages. Still, EUR/USD ended the week above 1.2268 minor support and well above last weeks low at 1.2154. It’s down but not out yet.

Dollar index continued to struggle in established range last week without making any progress. It could be trying to bottom around 50% retracement of 72.69 to 103.82 at 88.25. But there is so far no follow through strength through 91.01 key resistance. And, as long as 91.01 holds, the medium term corrective fall from 103.82 is still favor to extend to 84.75 cluster support (61.8% retracement at 84.58, before completion. Nonetheless, firm break of 91.01 will be a strong sign of reversal and will turn focus back to 95.15 resistance for confirmation.

In the currency markets, there are a couple of important developments to note.

AUD/JPY holds on to key long term cluster support at 81.48 rather well (50% retracement of 72.39 to 90.29 at 81.34). The medium term decline form 90.29 could have already completed, with three waves down after testing this key support level. Immediate focus is now back on 84.34 support support turned resistance this week. Firm break that will pave the way back to 89.08/90.29 resistance zone for, at least, extending range trading. 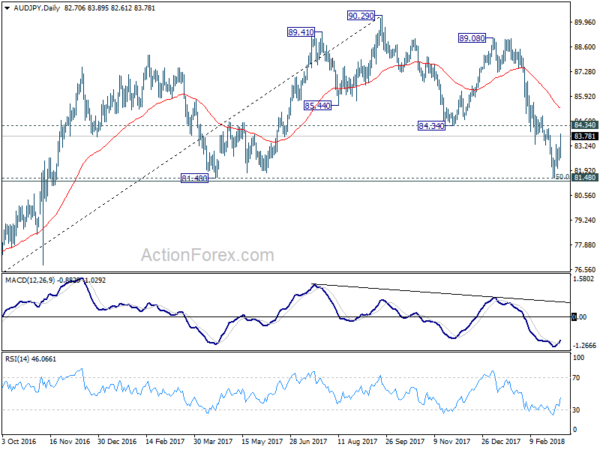 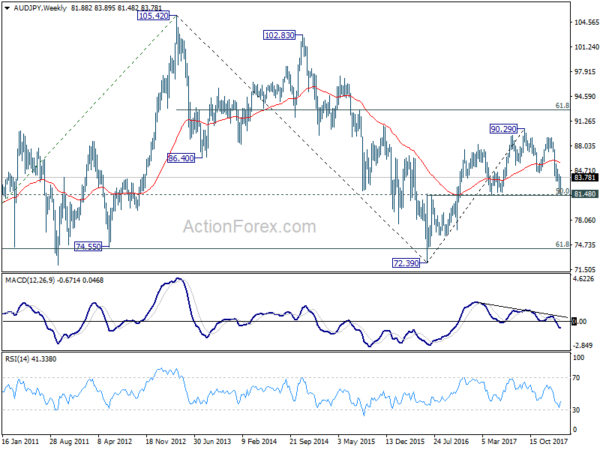 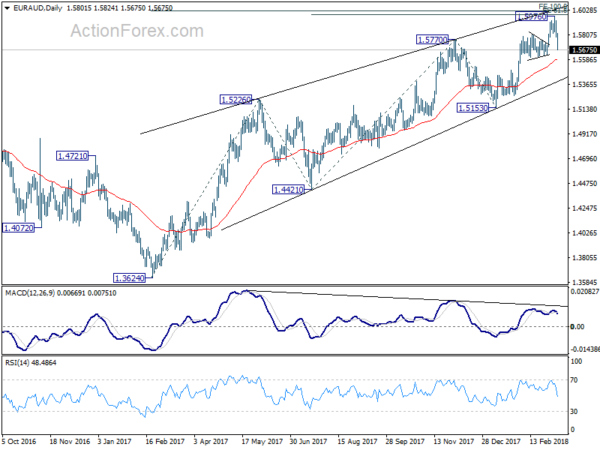 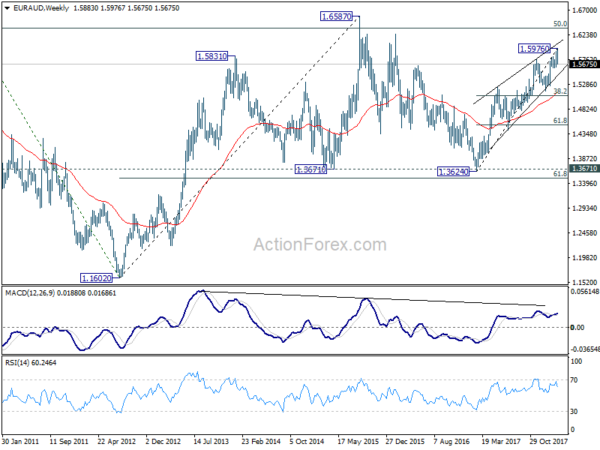 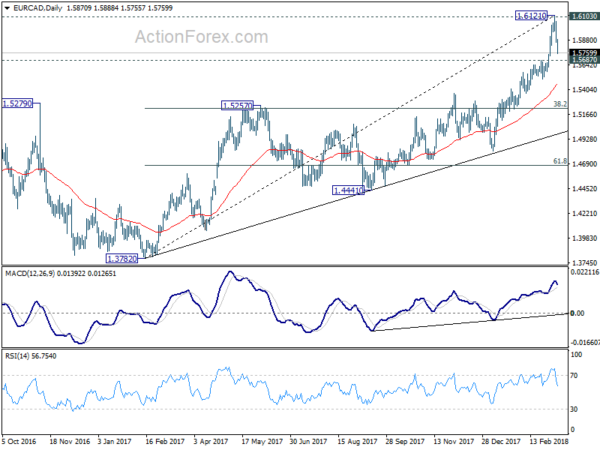 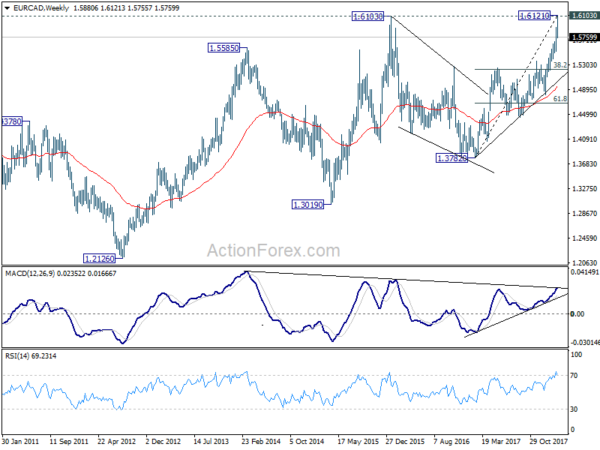 The return of global risk appetite after surviving all the recent event risks will likely help support commodity currencies. While Canadian Dollar tried to rebound, it’s outlook is still clouded by NAFTA renegotiation. That leaves Aussie as the better choice. To us, it’s a choice between Dollar, Euro and Yen. While EUR/USD was resistance, the Euro faced stronger resistance levels against Aussie and Canadian. Therefore, we’ll leave Dollar alone. And, comparing EUR/AUD and AUD/JPY, we believe the technical outlook of AUD/JPY is more convincing. 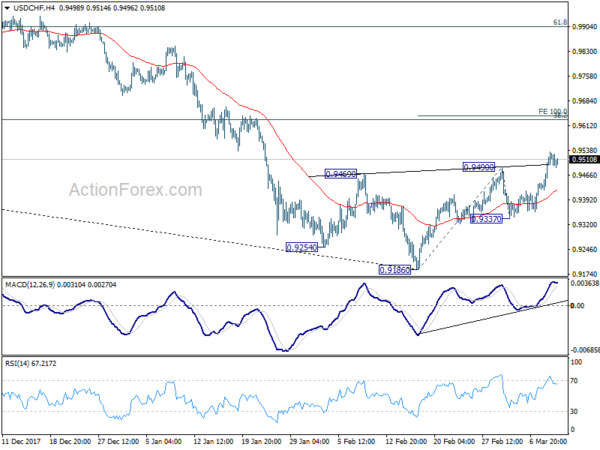 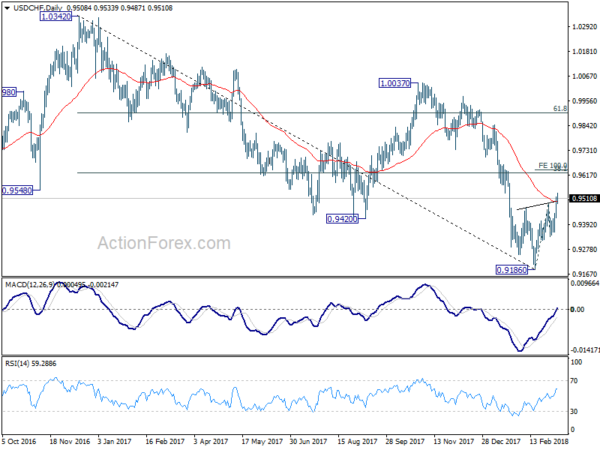 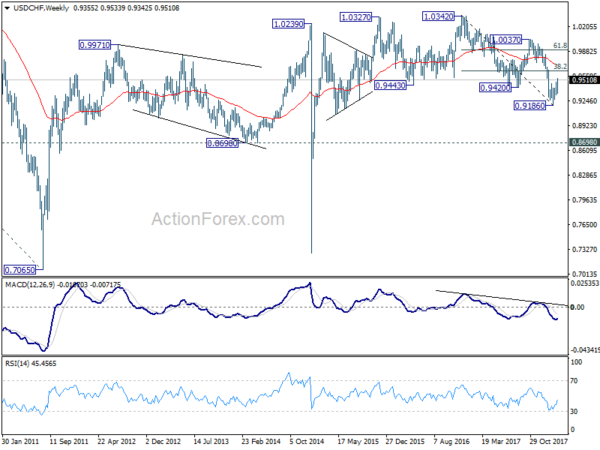 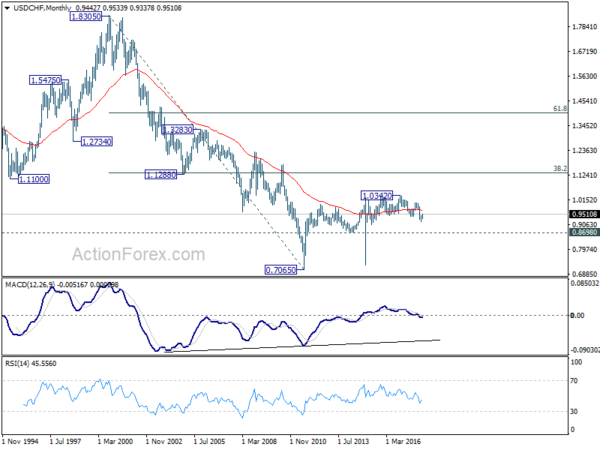