Euro Dived on ECB Wake Up Call, More Downside ahead

Euro was sold off broadly last week as the markets got a wake up call regarding expectation on ECB policy path. The common currency topped the top mover chart with EUR/GBP losing -1.96% and EUR/CAD lost -1.81%. Weakness in Euro also dragged down the Swiss Franc as GBP/CHF rose 1.77% while CAD/CHF rose 1.58%. On the other hand, Sterling ended as the strongest major currency last week, after some volatility on UK’s trigger of Brexit finally. Yen followed as the second strongest major currency as the recovery in US stocks and yields were disappointing. Meanwhile, Canadian dollar ended as the third major currency as WTI crude oil rebounded and closed above 50 psychological level.

A Reuters report quoted unnamed sources saying that markets have misinterpreted ECB’s hawkish twist during the March meeting. And ECB policy makers would be wary to make any more changes in the April statement. Traders seemed to be back to the "reality" that ECB’s asset purchase program will continue at least till the end of the year. And ECB will only raise interest rates after the program ends, even if that means keeping rates negative. Adding to the pressure on Euro, inflation data was rather disappointing. March CPI flash for Eurozone slowed sharply to 1.5% yoy, down from February’s 2.0% yoy and missed expectation of 1.8% yoy. Core CPI also deteriorated to 0.7% yoy, down from 0.9% yoy and missed expectation of 0.8% yoy.

Meanwhile, Euro will now turn to uncertainty of French elections in April. Latest opinion polls showed that the race has tightened in France. First round voting intentions for centrist Emmanuel Macron and anti-Euro Marine Le Pen slipped 1% to 25% and 24% respectively. On the other hand, support for conservative Francois Fillon rose 2% to 19%. 38% of people remained unsure on who they would vote. The first round will be held on April 23 and the run-off on May 7.

Weakness in Euro will likely continue at least in near term with ECB stimulus exit taken off the table. Some volatility could be seen from France elections, but that should be temporary. Revival in Euro, at this point, could only be provided by improvements in economic data, in particular inflation data.

UK has finally submitted a formal request for exiting European Union, triggering the Article 50 of the Lisbon Treaty. There are two important points to note. Firstly, European Council President Donald Tusk set out the guidelines for Brexit negotiation with UK. The foremost principle is that talks on trade relationship would only start after the enough progress is made on separation. And a final agreement on trade would not be concluded before Brexit. This is in the opposite to UK Prime Minister Theresa May’s parallel approach.

Meanwhile, Tusk also mentioned four issues for the first phase of the negotiation. Those include protecting rights of EU citizens in UK and UK citizens in EU; the bill for Brexit based on financial commitments and liabilities; clear legal framework to avoid uncertainties for businesses and institutions; how to maintain a "soft" border between Ireland and Northern Ireland. Tusk also said that EU would "firmly stand by" the proposals while "the talks which are about to start will be difficult, complex and sometimes even confrontational."

But markets looking through Brexit

Sterling’s strength last week is a reflection that markets are looking past the "noises" of Brexit. Indeed, the focus is on economic and BoE outlook. Traders should be reminded that in the March BoE meeting, Kristin Forbes voted in favor of a 25 bps rate hike, indicating that policy makers could be getting more impatient on inflation. UK CPI has indeed jumped to 2.3% yoy in February, while core CPI rose to 2.0% yoy. The Pound will likely remain resilient until inflation tops.

A number of Fed officials spoke last week and generally speaking, the base case of Fed is still three hikes in total this year. And that hasn’t taken into account fiscal policies due to uncertainties around. Stocks and yields were paring back prior gains based on expectation of US President Donald Trump’s expansive policies. The failure of the health care act raised much doubt on Trump’s ability to push through his agendas. Tax reform is now the focus of the markets and stocks would need to have Trump to deliver in the very near term. However, there are already reports on the lack of clear plan and adequate staff in Trump’s team on taxes. Hence, that could yet be another disappointment.

For now, Dollar trader will look into economic data to solidify the base case of two more Fed hikes this year. Key data will be released this week including ISM indices and non-farm payroll. Wage growth will stay as a focus for the markets. Fed will also release March meeting minutes but overall, traders will likely stay calm as we don’t expect much new information from the minutes.

Technically, the rebound in DJIA last week was mildly disappointing. NASDAQ did surge to record high and stayed firm there. But equivalent strength was not seen in DJIA. DJIA drew support from 55 day EMA last week but upside was limited by 20757.89 near term resistance. Note that rejection from this resistance will very likely drag the index down through 55 day EMA to 38.2% of 17883.56 to 21169.11 at 19914.02 before drawing support from another key level. Meanwhile, a break of 20757.89 will bring a retest of 21169.11. But that doesn’t necessarily mean up trend resumption. Rather, that should have just set the range for consolidations.

The recovery in 10 year yield was also disappointing. Some support was seen ahead of 2.314 support. But TNX was limited firmly by 55 day EMA so far. And the sideway pattern last week argues that fall from 2.615 is not completed. We’re holding on to the view that there are two main interpretations of the price actions. Firstly, consolidation from 2.621 is extending with fall from 2.615 as the third leg. Secondly, rise from 2.314 to 2.615 is a failure fifth that ends the whole impulsive rally from 1.336. In both case, further fall should be seen through 2.314. But we’d expect strong support from around 38.2% retracement of 1.336 to 2.621 at 2.130 to contain downside and bring up trend resumption.

Dollar index’s rebound last week does suggest short term bottoming at 98.85. However, firstly, it was mainly driven by weakness in Euro. Secondly, it’s held below 55 day EMA so far. Thirdly, it’s not accompanied by a surge in yields. Hence, we’ll be skeptical on the strength in the greenback. On the upside, sustained trading above 55 day EMA would bring a test on 102.26. And decisive break there will be a strong sign of up trend resumption. However, rejection from 55 day EMA will likely send the index through 98.85. In that case, the correction from 103.82 could only end after testing 50% retracement of 91.91 to 103.82 at 97.86.

Regarding trading strategy, we tried to sell AUD/JPY last week on recovery to 85.83. The cross first hit 83.81 but quickly recovery to as high as 85.75, before weakening again. That is, our sell order was NOT filled, missing 8 pips! Nonetheless, the rejection from 55 day EMA is consistent with our bearish view. And considering the above bearish outlook in stocks and yields, we’d stay bearish in AUD/JPY too. As the recovery looks over, we’ll just sell AUD/JPY at market this week, with a tight stop set at 86.00. Downside target is 38.2% retracement of 72.39 to 88.21 at 82.16. 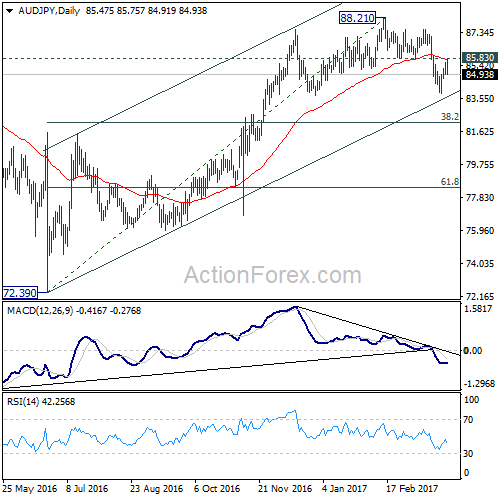 Meanwhile, we’re also looking for opportunity to sell Euro. We’d prefer to avoid Dollar as we’re not convinced with its strength as mentioned above. EUR/JPY is too close to 118.23/45 key support zone. EUR/GBP and EUR/CAD are two options to consider. Sterling is having a mild upper hand considering GBP/CAD’s rebound since early this year. Canadian Dollar is lifted by the rebound in oil price. But current 50 handle overlaps with 55 day EMA (now at 50.70). Hence, we’ll choose EUR/GBP as the pair to short. We’ll try to sell EUR/GBP on recovery to 0.8550 with stop at 0.8610. 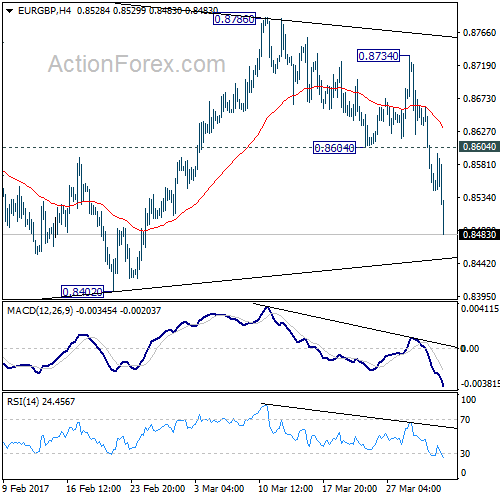 Initial bias in EUR/GBP stays on the downside this week for 0.8402 support. Break will indicate that larger decline from 0.9304 is resuming. In such case, EUR/GBP should target 0.8303 low and below. As fall from 0.8304 is viewed as a corrective move, we’d expect strong support at 0.8116/20 cluster support to contain downside and bring rebound. On the upside, break of 0.8604 support turned resistance is needed to indicate completion of fall from 0.8786. Otherwise, outlook will remain cautiously bearish in case of recovery. 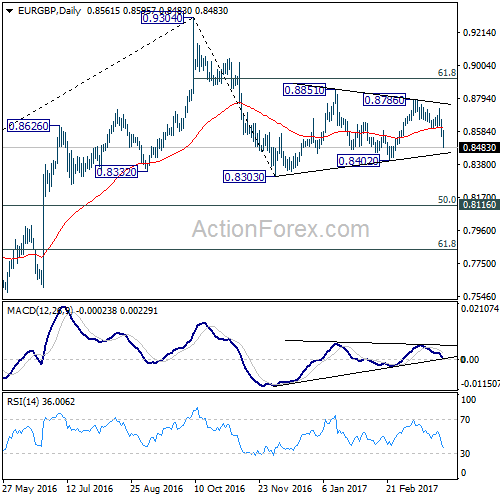 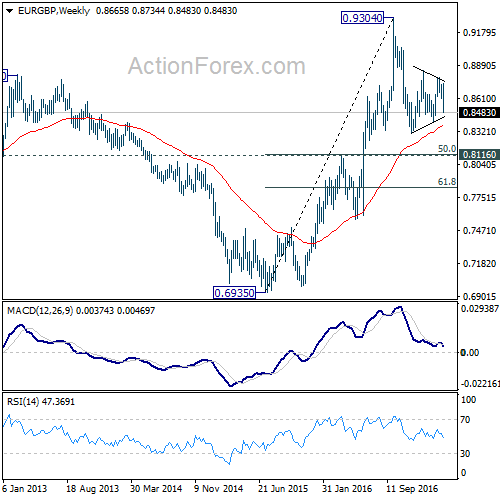 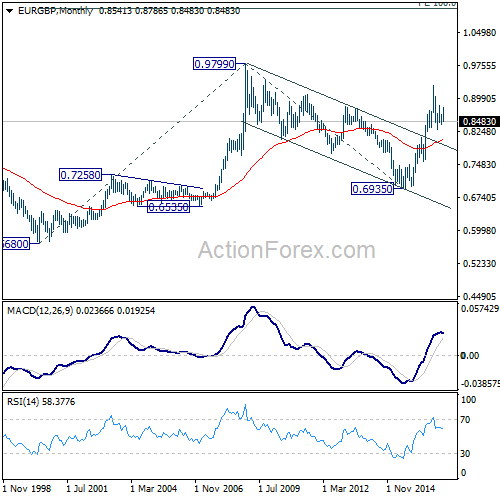