Swiss Franc ended last week as the strongest one, very much thanks to the selloff in EUR/CHF. Uncertainty over the EU policy of the new Italian government sent Euro broadly lower, which ended as the weakest. Despite surge in 10 year yield to 7-year high, Dollar could only extend recent rally against Euro and Yen. The greenback, admittedly, ended as the second strongest one. But a number of political factors are limiting the greenback’s strength despite firm expectation of rate path. Dollar is seen as in consolidation mode as we suggested last week, despite the rise against Euro and yen.

Euro ended as the weakest one last week, partly due to formation of the anti-EU coalition government in Italy. Two populist parties finally agreed on a deal to form a coalition government. The anti-establishment 5-Star movement and the far-right League signed the “Contratto Per Il Governo Del Cambiamento” or “Contract for the Government of Change”. The joint program will be put to vote by 5-Star and League members. After approval, it will be presented to Italian President Sergio Mattarella. A government could be formed as early as next week.

There are notable common grounds between the two parties. Firstly, the both promote loose fiscal policies. It’s clearly said in the accord that “the government’s actions will target a programme of public debt reduction not through revenue based on taxes and austerity, policies that have not achieved their goal, but rather through increased GDP by the revival of internal demand.” That means, they are highly unlikely to stick to EU fiscal discipline.

Secondly, both are Eurosceptics. There is no call to quit Eurozone in the accord. And they instead push for review of EU governance and fiscal rules first. Thirdly, both agree to harsher stance on immigration, and “Italian First” principle in terms of trades. All these attributes would very likely bring Italy to clash with EU and Eurozone ahead, and drag down the EU level reforms pushed by German Chancellor Angel Merkel and French President Emmanuel Macron.

Additionally, bear in mind that ECB has already shown some concerns on the slowdown in Eurozone in Q1. So far, there is no solid sign of pickup in Q2 yet. Adding to political uncertainty in Italy, it’s getting harder for ECB to make a decision on fate of the asset purchase program by June meeting. And if the upcoming data, like this week’s PMIs, don’t offer any silver-lining, ECB will more likely extend the asset purchase program beyond September. And a rate hike will be pushed further down the road.

Finally, the steep selloff in EUR/CHF, losing -198 pips or -1.66% over the week, confirmed rejection from the key 1.2 handle. Remember that it’s the prior floor imposed by SNB before they gave up back in 2014. This level is proven too much psychologically for Swiss Franc bears. The rejection now open up a medium term correction that could extend to 1.5 handle. And the weakness in EUR/CHF going forward will likely weigh on Euro elsewhere. 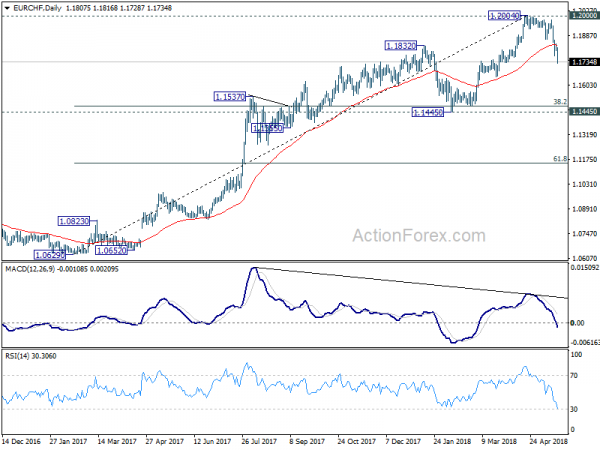 Dollar rose without conviction, despite surge in yield

While Dollar ended up against all major currencies last week except Swiss Franc, its strength was not that apparent. The greenback only closed above prior week’s high against Euro and Yen. There is no change in our view in last weekly report that Dollar has turned into consolidation phase. The fact that EUR/USD fell was mainly due to Euro’s own problems. And only USD/JPY was taken up by the rally in treasury yields. We’re talking about 10 year yield having the largest weekly rise in a month. And, it broke key resistance level to 7-year high. But, Dollar was held in range against Sterling, Swiss Franc, Australian and Canadian Dollar.

Tension between Trump and EU is set to intensify

Fed is on course for another hike in June, and at least one more within the year. There is no change in such expectation. But the US, under the leadership of Trump, is having problems on many fronts. The pull out from Iran nuclear deal triggered strong reactions from EU. The latter showed unity in a summit in Bulgaria on the commitment to the JCPoA Iran deal. And they got unanimous backing from state members to trigger four countering measures to the US sanctions on Iran, they could affect EU companies. That includes reactivating Block Statue, a 1996 law to forbid EU companies from complying with any US sanctions on Iran. And there were strong words from EU officials complaining Trump. Considering EU is only getting temporary exemptions from the US steel and aluminum tariffs till June 1, the tensions between US and EU will more likely intensify then not.

Then, US relationship with North Korea had an about turn last week as the latter threatened to cancel the Trump-Kim Summit on June 12. North Korea was infuriated by Trump’s national security adviser John Bolton’s proposal of Libyan style of denuclearization. North Korea’s vice-foreign minister Kim Kye-gwan condemned that “it is essentially a manifestation of awfully sinister move to impose on our dignified state the destiny of Libya or Iraq which had been collapsed due to yielding the whole of their countries to big powers.”

Later, Trump warned on Friday that Libyan model “the model, if you look at that model with Gaddafi, that was a total decimation. We went in there to beat him. Now that model would take place if we don’t make a deal, most likely.” It should noted that a year after Libya’s Muammar Gaddafi agreed to give up nuclear weapons in 2003, he was killed by Western-backed rebels. So far, nobody knows whether the June 12 summit will actually happen.

China-US trade talk resulted in words but no action

US-China trade negotiation resumed last week with Chinese Vice Premier Liu He and the delegates’ visit to Washington. It’s reported by Reuters and Bloomberg that a Trump administration official leaked the information that China is offering US a USD 200b cut in annual trade surplus with the latter. But the Chinese Ministry of Commerce was quick to come out and deny it. And so far there were just words, without anything solid. Trump’s chief economic advisor Larry Kudlow said the negotiations “are going well”. And, “China’s come to trade, they’re meeting many of our demands.” But, “there’s no deal yet, to be sure, and it’s going to probably take a while. It’s a process. But they’re coming to play. I believe they want to make a deal.” The uncertainty on US-China trade relationship will drag on for more time.

Lighthizer poured cold water on NAFTA after missing May 17 deadline

NAFTA negotiation passed the May 17 deadline without making any breakthrough. The new agreement, if there is any, is unlikely to be approved by the current Congress. There could be a new wave of uncertainty after the mid-term elections. In addition, Mexican presidential election on on July 1 is also quickly approaching. Canadian Prime Minister Justin Trudeau sounded optimistic that he was “positive”. Mexico’s economy minister Ildefonso Guajardo also said a deal could be reached by the end of May. But US Trade Representative Robert Lighthizer poured cold water and said “the NAFTA countries are nowhere near close to a deal” with “gaping differences” on a number of issues.

All theses factors limit Dollar’s rally attempt. In particular, after a long stretched rally that started back in mid April, the greenback need some time to digest recent moves.

10 year yield now in most important resistance zone in years

We’d like to point out that TNX is now the most important resistance zone that’s seen for years. 2013 high at 3.036 marks the start of the zone. On the upside, it’s the multi-decade trend line resistance at around 3.20. Sustained break of this resistance zone will confirm reversal of this multi-decade trend, with a double bottom pattern (1.394, 1.336) in the monthly chart. That would mark the end of an era of persistently falling US yields.

Dollar index surged thanks to Euro and Yen

Dollar index’s rally extended last week, thanks to weakness in Euro and Yen. Rebound from 88.25 is on course for 38.2% retracement of 103.82 to 88.25 at 94.19. We’ll see if there is any loss of momentum as the index approaches this level. But outlook will remain bullish as long as 92.24 support holds, even in case of retreat.

EUR/USD’s fall extend to as low as 1.1749 last week and there is no clear sign of bottoming yet. Initial bias remains on the downside this week first. Current decline from 1.2555 should target 1.1708 medium term fibonacci level next. Break will target 1.1553 support. On the upside, above 1.1821 minor resistance will turn bias neutral again. But outlook will continue to stay bearish as long as 1.1995 resistance holds. 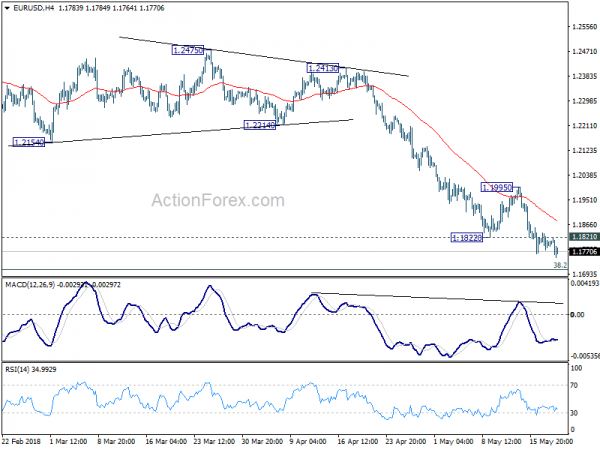 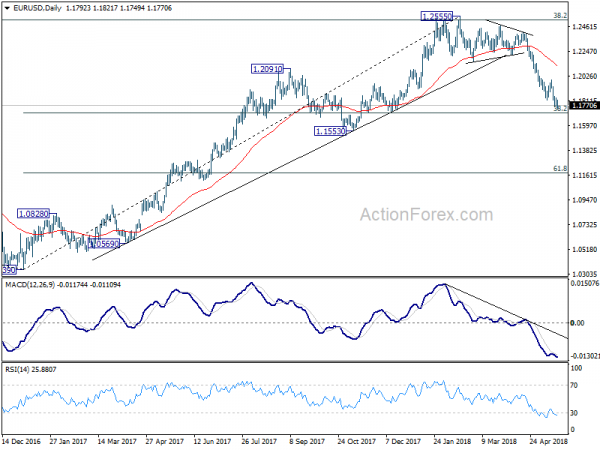 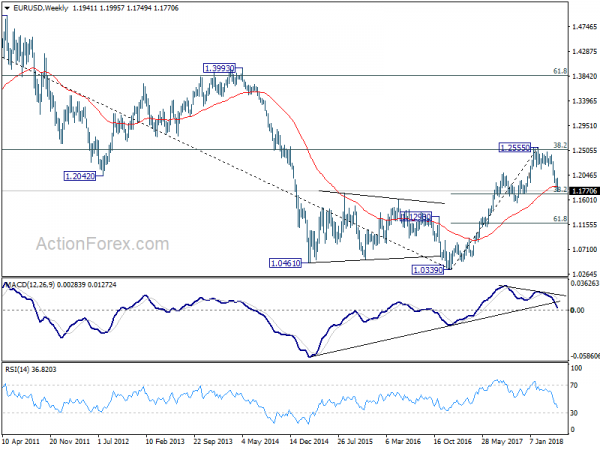 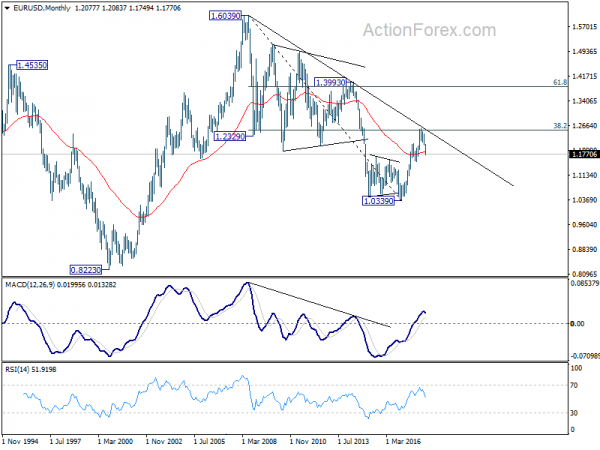