Explosion of coronavirus cases should further delay Korea’s economic recovery, leading Bank of Korea to push forward the rate cut to as soon as this week. Last month, policymakers shifted the tone to neutral from dovish. However, the January meeting was held before the spread of China’s coronavirus to the rest of the world. It was also before the first case was reported in Korea. The dramatic increase in number of confirmed cases, together with negative impacts from slowdown in China, could have devastating in Korea’s economy. 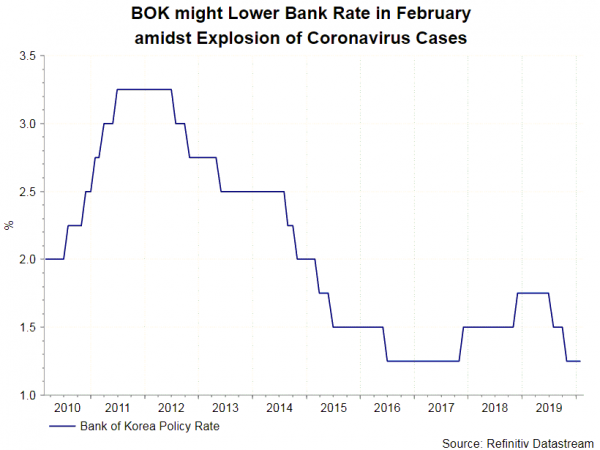 Novel coronavirus cases has surged to over 800 in Korea at the time of writing this report, making it the country with most infected cases outside of China. The government has declared the highest threat alert and President Moon Jae-in noted that the coming few days are critical to contain the outbreak. Globally, the number of confirmed cases has surged to more than 79000, of which over 77000 were in China. While it appears that the number new infection in China has been in downtrend over the past week, caution is needed to read data reported in China, a country notorious for reporting fraudulent data and covering up negative news about the country. It is also believed that the Chinese government has downplayed the seriousness of the epidemic in the country in order to rescue the slowing economy. A number of provinces in China, especially those with great economic importance such as Guangdong and Shanxi, have lowered the emergency alerts, paving the way for resumption of operation in factories. This move is unwise and could exacerbate the epidemic.

The impact of the outbreak on Korea is twofold. First, Korea’s economy has great exposure in China. This suggests that a material economic slowdown in China would have direct impact on Korea. In this regards, tourism and trade are the focus. Chinese tourists take up about half of Korea’s tourism which contributes over 2.5% of Korea’s GDP. Meanwhile, China, the destination of 25% of Korea’s total exports, is Korea’s largest trading partner. Decline in Chinese consumption is detrimental to exporters in Korea. Data for the first 20 days of February shows that Korea’s exports to China fell -3.7% y/y. As the epidemic has continued to worsen, it is prudent to expect further and deeper contraction in coming months. Meanwhile, the country also imports the most from China. Car makers in Korea rely on China’s imports of parts. Indeed, it was reported that production in Korea was halted from February 4 to 11 as a result of disruptions in Chinese supply. To a lesser extent, other Korean industries also rely on semiconductors, LCD and petrochemicals shipped from China.

Second, the sudden explosion of infection cases in Korea would inevitably hurt sentiment and household consumption. Consumption’s contribution to GDP growth has been mild over the past quarters. While this is originally expected to be offset by fiscal stimulus measures, we doubt if the government can do sufficiently to contain the current unexpected challenge. As such monetary easing would be needed. A neutral tone at the January meeting had suggested that BOK would keep its powder dry in February. The market consensus has projected no rate cut at least until April. However, the rapid deterioration over the past week suggests that BOK might need an urgent easing in order to prevent the economy from collapsing. Indeed, the bar to lower the policy further to 1% is not high. At the January meeting, there were two members voting for a rate cut, one more than the prior meeting. The outbreak of the coronavirus could lead more members to opt for further easing. Even if the central bank decides to leave the policy unchanged, it would have to deliver a dovish message and hint a rate cut in coming months. We also expect BOK to cut its estimates on GDP growth and inflation for this year.