Policy Divergence was once a hot topic back in 2015 through early 2017, when the FOMC began to increase the Fed funds rate, while other major central banks maintained extra accommodative monetary polices as they struggled to boost the economies. This was then replaced by the story of convergence as other central banks caught up with monetary policy normalization. For instance, BOE increased the Bank rate in November 2017, BOC raised the policy rate twice in 2H17 and once in January 2017. ECB also signaled less accommodative measures by trimming the size of asset purchases and removing easing bias in the policy guidance.

However, the story of policy divergence between the Fed and other major central banks has re-emerged since April. Macroeconomic data for major economies eased in the first quarter. Despite the slowdown in GDP growth in 1Q18, April’s inflation and employment data showed resilience, signaling growth should likely pick up again in the second quarter. This helps reinforce the Fed’s rate hike path. On the contrary, there are signs that deceleration in first quarter growth in the UK might continue in the second quarter, while Brexit uncertainty adds to bearishness. In the Eurozone, ongoing political uncertainty is added to slowdown in economic activities expansion. This should make the ECB more cautious in adopting a more hawkish stance on monetary policy.

US: GDP growth eased to an annualized +2.3% in 1Q18, down from +2.9% in the prior quarter. However, the improvement on inflation remains on track. Headline CPI rose to +2.4% y/y, while core inflation rose to +2.1%, in April. PCE, the Fed preferred gauge, also showed that the price level reached +2% for the first time since February 2017. On the employment market, nonfarm payrolls increased +164K in April. While the increase came in less than expected, the addition in March was revised higher to +135K from +103K reported previously. Notwithstanding the adverse impact of cold weather on job growth, the data continued to point to a healthy job market. Meanwhile, the unemployment rate dropped further to 3.9%, the lowest in over 17 years. Yet, the participation rate slipped for two months in a row, to 62.8%, in April. Average hourly earnings rose +2.6% y/y, slightly below expectations. While both inflation and employment reports for April were released after the FOMC meeting in May, they would have reinforced policymakers’ hawkish stance were they released ahead of it. A June rate hike is a done deal and the Fed appears comfortable to complete this year with at least three rate hikes in total, followed by three more next year.

UK: BOE adopted one post-crisis rate hike in November 2017, in an attempt to cool down inflation. While Governor Mark Carney had hinted more tightening earlier this year, BOE refrained from raising the Bank rate in May, despite the risk of ruining the central bank’s credibility. The members added a more dovish tone in the accompanying statement and minutes, and downgraded GDP growth estimate for 2018 and inflation estimates over the forecasting horizon. UK’s GDP growth softened to +0.1% q/q in 1Q18, from +0.4% in 4Q17. This also marks the weakest growth in 5 years. PMI reports also raised concerns that the slowdown might not be temporary, as weakness in economic activities could extend from the first quarter to the second quarter. Brexit uncertainty is inevitably hurting consumer and business confidence.. With inflation moderating since then, we believe the central bank would be cautiously assessing the economic development before the next move. 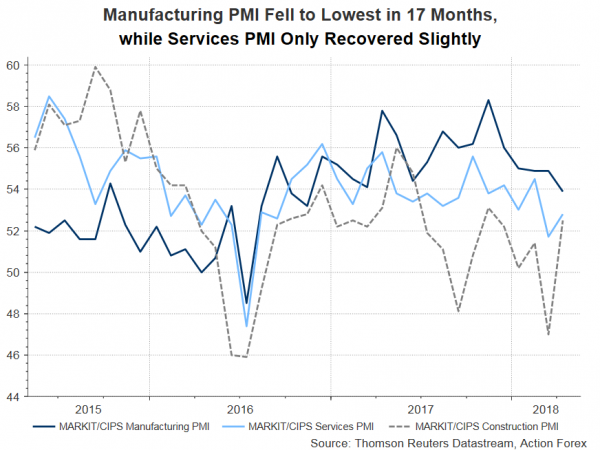 Eurozone: ECB appears to have shifted from last year’s “dovish tapering” to a “delay in tapering” in April, due to softer economic data and growing political uncertainty. ECB announced late last year to trim asset purchases, by half, to 30B euro/ month, effective January 2018. In March, it surprisingly removed the easing bias that “if the outlook becomes less favorable, or if financial conditions become inconsistent with further progress towards a sustained adjustment in the path of inflation, we stand ready to increase the asset purchase program (APP) in terms of size and/or duration”.

On the political front, the new populist government in Italy is prone to pose continuous threat on the EU and euro. While not demanding to exit the Eurozone, the coalition government has agreed on aggressive fiscal expansion plan. The government and its supporters would continue to remain Euro-skeptical so as to get an upper hand on future negotiations. Italian bond yields have spiked since the middle of the month. The trend would likely continue in the near- to medium term as the market does not only worry about the political uncertainty, but also the spending and borrowing plan in the third largest economy of the Eurozone.

Switzerland: SNB’s accommodative monetary policy has remained stable since removal of the EURCHF floor in 2015. For the rest of the year, we expected SNB to maintain the commitment to intervene the FX market when needed, reiterating that it would “remain active in the foreign exchange market as necessary”, while “taking the overall currency situation into consideration”.

The impact of policy divergence on the financial markets has been evidenced in recent strength in US dollar and bond yields, as well as the widening the yield spreads between US Treasuries and government bonds of other economies.