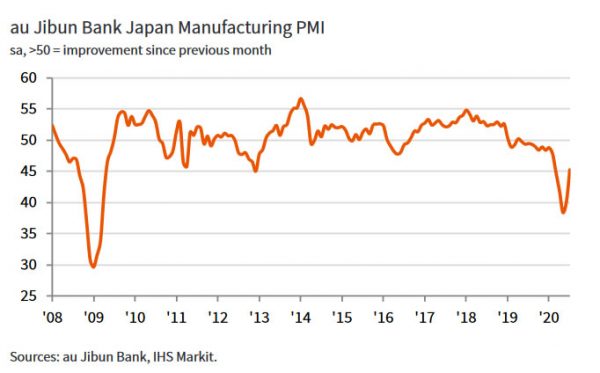 Minneapolis Fed President Neel Kashkari told CBS that the only way to have a “real robust economic recovery” is through “clamping back down” the coronavirus cases to keep things under control, or “getting a vaccine or a robust therapy”. Otherwise, “we’re going to have flare ups, lockdowns and a very halting recovery with many more job losses and many more bankruptcies for an extended period of time unfortunately. ”

“If we were to lockdown hard for a month or six weeks, we could get the case count down so that our testing and our contact tracing was actually enough to control it,” Kashkari added. “If we don’t do that, and we just have this raging virus spread throughout the country with flare-ups and local lockdowns for the next year or two, which is entirely possible, we’re going to see many, many more business bankruptcies.” 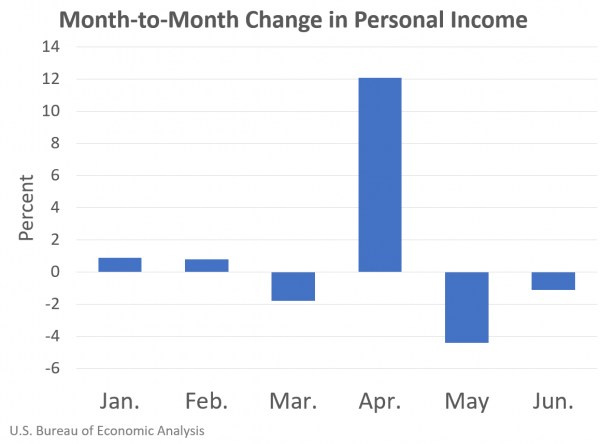 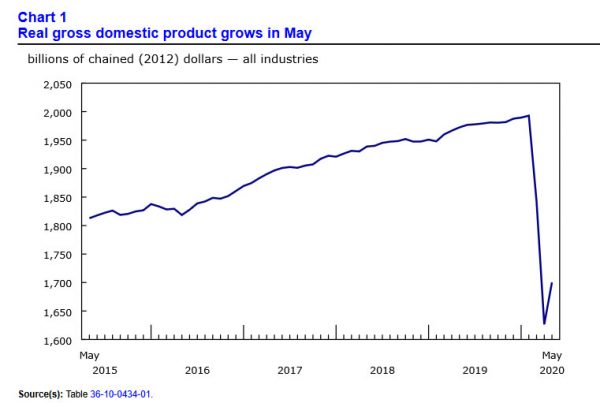 Among the Member States, for which data are available for the second quarter 2020, Spain (-18.5%) recorded the highest decline compared to the previous quarter, followed by Portugal (-14.1%) and France (-13.8%). Lithuania (-5.1%) recorded the lowest decline.

France GDP contracted -13.8% qoq in Q2, better than expectation of -15.2% qoq. Over the year, it’s -19.0% yoy lower than in Q2 2019. INSEE said the negative developments in first half of the year is linked to the shut down of “non-essential”activities between mid-March and beginning of May. “The gradual ending of restrictions led to a gradual recovery of economic activity in May and June, after the low point reached in April. ” 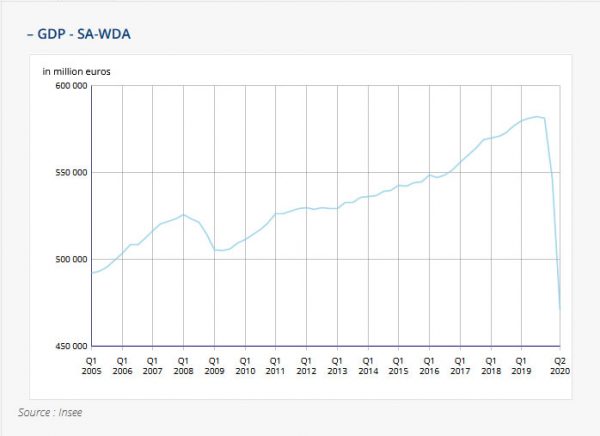 WTI crude oil drops sharply to as low as 38.58 overnight, but recovery ahead of 38.45 support. Though there is no following buying for further recovery above 40 handle. 38.45 support now looks rather vulnerable. Sustained break of 38.45 should confirm rejection by 42.05 key resistance. Deeper fall should then be seen back towards structure support level at 31.23, to correct the rebound from April’s spike low. 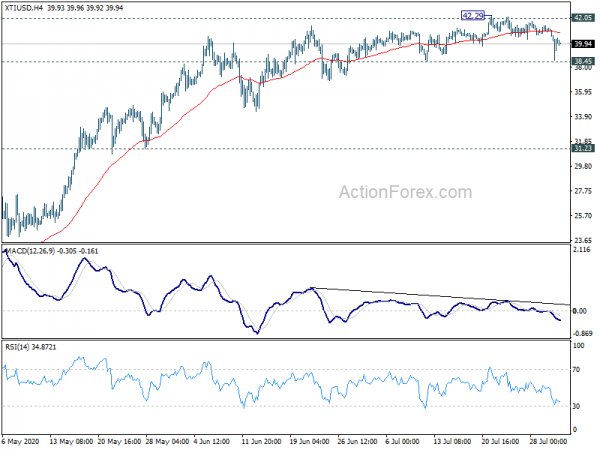 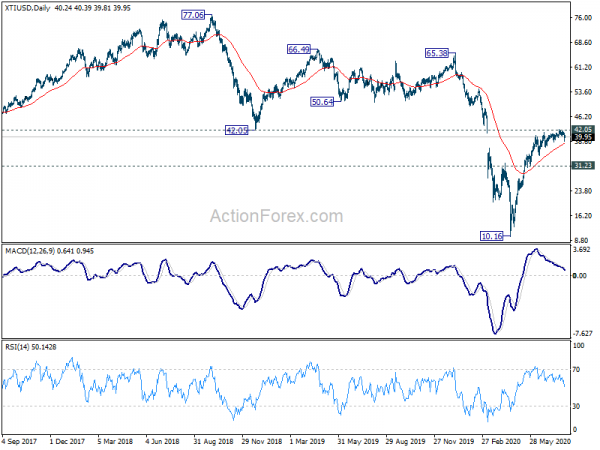 Australian Dollar is mixed in Asian session. AUD/NZD dropped notably after hitting 1.0800 yesterday, but it’s quickly recovering. At this point, rise from 1.0565 is still in favor to extend higher as long as 1.0669 support holds. Break of 1.0800 will target 1.0880 high next. However, based on current momentum, we’re not expecting a break there on first attempt. Meanwhile, break of 1.0669 will extend the pattern from 1.0880 with another fall back towards 1.0565 support. 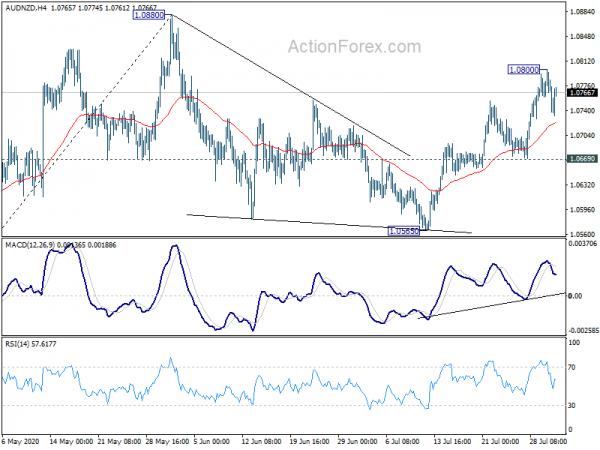 China’s official PMI Manufacturing rose to 51.1 in July, up from 50.9, slightly above expectation of 51.0. That’s the highest reading since March too. Looking at some details, production rose 0.1 to 54.0. New orders also improved by 0.3 to 51.7. New export orders rose notably by 5.8 to 48.4, but stayed in contraction. PMI Non-Manufacturing retreated mildly to 52.3, down from 54.4, but beat expectation of 51.2. Overall, the set of data suggests that recovery in on track, but it will remain a long road back to pre-pandemic levels. 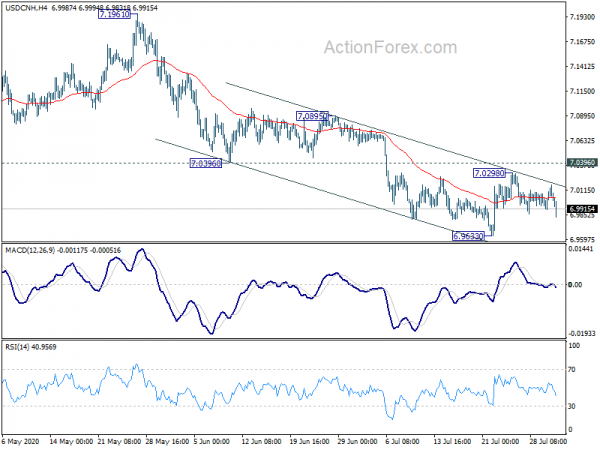 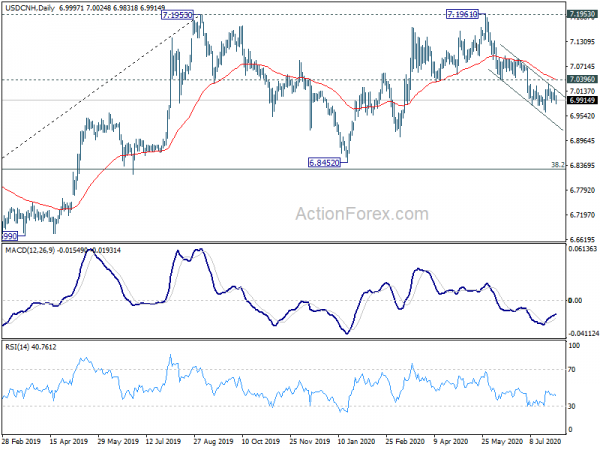 US initial jobless claims rose 12k to 1434k in the week ending July 25, slightly below expectation of 1450k. But that’s still the second straight week of increase in the figure. Four-week moving average of initial claims rose 6.5k to 1369k. 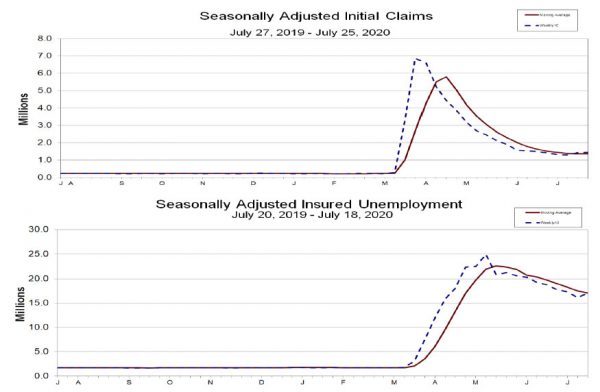 US GDP contracted -32.9% annualized in Q2, slightly less than expectation of -35.0%. That’s nevertheless the sharpest annualized decline in quarterly records dating back to 1947.

“The decline in second quarter GDP reflected the response to Covid-19, as `stay-at-home’ orders issued in March and April were partially lifted in some areas of the country in May and June, and government pandemic assistance payments were distributed to households and businesses,” BEA said in the release. 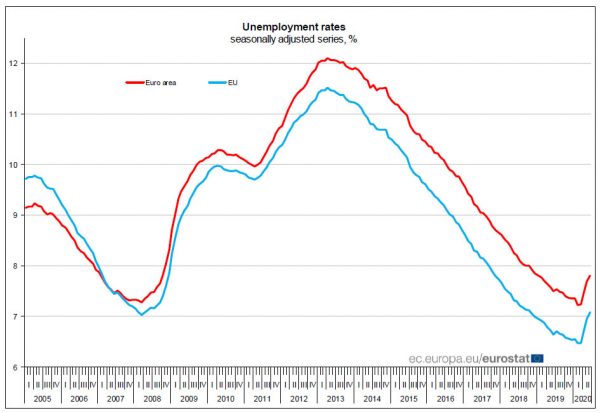 In its Monthly Bulletin, ECB said, “looking beyond the disruption stemming from the coronavirus pandemic, euro area growth is resuming with the gradual lifting of containment measures, supported by favourable financing conditions, the euro area fiscal stance and a resumption in global activity.” However, “uncertainty remains extremely elevated, making it very difficult to predict the likely extent and duration of the recovery.”

ECB reiterated that it “continues to stand ready to adjust all of its instruments, as appropriate, to ensure that inflation moves towards its aim in a sustained manner, in line with its commitment to symmetry.”

Germany GDP contracted -10.1% qoq in Q2, worse than expectation of -9.0% qoq. That’s also the largest decline since the beginning of quarterly GDP calculations for Germany in 1970. The contraction was also more than double of that during the financial market and economic crisis back in Q1 2009 (-4.7% qoq). 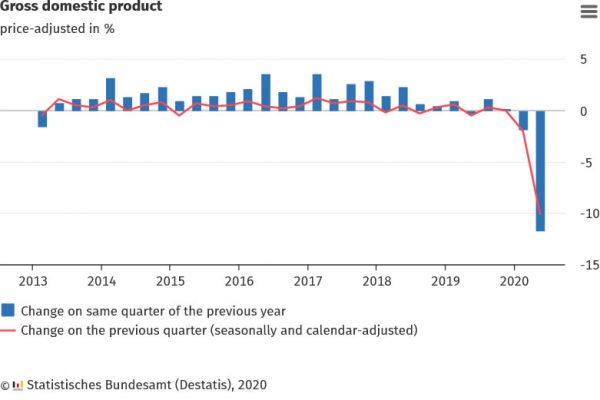 Swiss KOF Economic Barometer rose strongly, for the second month, to 85.7 in July, up from 60.6. That’s also well above expectation of 72.5. Nevertheless, “despite this positive development, the value remains clearly below its long-​term average.”

KOF also said, in the manufacturing sector, “the outlook is brightening in all segments”, particularly pronounced in the metal industry, the electrical industry, the wood, glass, stone and earths industry, mechanical engineering and the chemical, pharmaceutical and plastics industry. 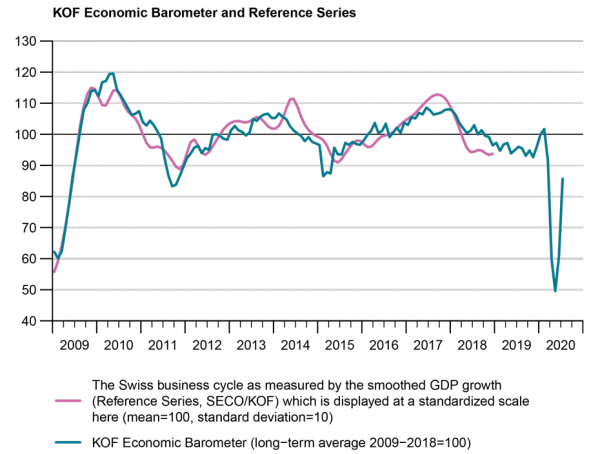 Australia’s Victoria reported a record 723 daily coronavirus cases for the past 24 hours as situation in the second most populous state continued to worsen despite returning to lockdown. Australia Treasury Secretary Steven Kennedy said that the outbreak in Victoria “pulls us back” and together with new Queensland border restrictions, the national economy will be hurt more than forecast in last week’s federal budget update.

Kennedy said, “further constraints, be they through movement or through the extension of the six-week measures that the Victorian government announced, will mean growth will be lower, employment will be lower and unemployment will be higher. Beyond that, of course, people can lose confidence and have concerns about what they’re seeing unfolding, even in other parts of the country.

He added that 75% of Victorian firms currently receiving the JobKeeper wage subsidies were likely to remain on the scheme beyond the September renewal deadline. Meanwhile, Q2 GDP is expected to contract -7% and road to recovery will be long and unpredictable. New South Wales’ management of the virus would now be crucial for the economy. 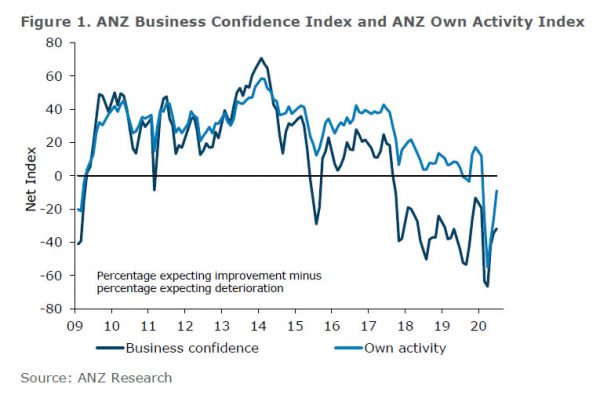