Action Forex
HomeContributorsFundamental AnalysisDollar Up On Yen Despite Trade Noise, NFP Employment Report The Next...

Dollar Up On Yen Despite Trade Noise, NFP Employment Report The Next Challenge

FOREX: The US dollar edged higher by 0.38% on Friday against the Japanese yen and jumped above the 109.00 psychological level ahead of the US employment report for May later in the day. It is the last NFP data before the June Fed meeting. The US dollar index – which tracks the greenback’s performance versus a basket of six major currencies – traded slightly higher by 0.07% at 94.05. Meanwhile, euro/dollar is poised to post its first week of gains after six consecutive negative weekly sessions as worries over Italy’s political crisis ease. The pair today is trading higher by 0.15%. Sterling gained 0.16%, inching up to 1.3328 versus the greenback. UK’s Manufacturing PMI provided support to the pair after the measure rose to 54.4 in May from the previous month’s 17-month low of 53.9, and well above market expectations of 53.5. The Antipodean currencies traded lower with aussie/dollar and kiwi/dollar declining by 0.32% and 0.21% respectively. Dollar/loonie was up by 0.02%. 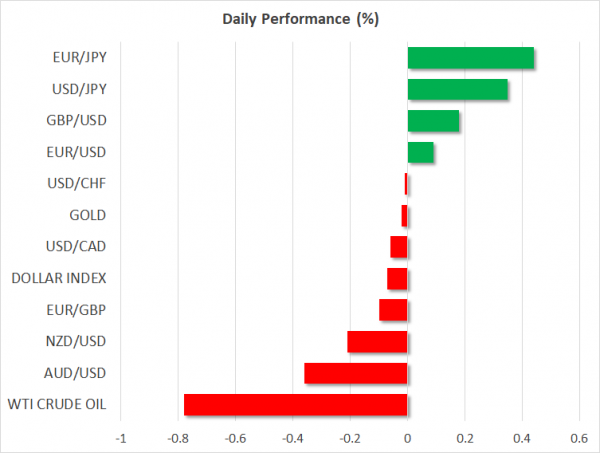 Nonfarm payrolls out of the US at 1230 GMT will be the most important data release in the remainder of the day, giving a last glance on the US labor market before the Fed concludes its two-day monetary policy meeting on June 13. Analysts believe the numbers will underline the strength of the labor market once again, projecting a rise of 183k in nonfarm job positions in May compared to 178k in the previous month and a faster wage growth of 0.2% versus the 0.1% increase in March. The unemployment rate though, is forecast to remain unchanged at 3.9%, at the lowest level reached since 2000. Markit and ISM manufacturing PMIs due at 1345 GMT and 1400 GMT will attract some interest as well. Figures on total vehicles sales will be delivered at 1930 GMT.

Buying positions on the dollar could strengthen if the NFP report beats expectations.– especially on the wage front – as that could boosting confidence in the US economy and chances for at least two more rate hikes this year. But further escalation in trade tensions is likely to cap any major rally in the greenback. Yesterday, the US President fired another salvo in a trade dispute, slapping tariffs on steel and aluminum imports from the EU, Canada, and Mexico. The move came a month after Trump decided to temporarily exempt those allies from tariffs, postponing the imposition until June 1. However, the negotiating teams failed to reach a common ground during that period and the EU, Canada, and Mexico are now set to face import tariffs going into effect today. Yet the story did not end there as Canada, the biggest steel exporter to the US, retaliated immediately, announcing tariffs on $16.6 billion products imported from the US (taking effect in July), while Mexico said it is activating equivalent measures with the US until Washington removes its levies. The EU who has not taken any steps yet, announced it would fight back. Trade relations with China are likely to come to the surface again during the weekend as the US Commerce Secretary, Wilbur Ross, will be in Beijing in an attempt to increase US exports to China.

Meanwhile, in the eurozone, political risks took the back seat on Thursday after the populists parties, the anti-establishment Five-Star Movement and the right-wing League finally agreed to form a new government, avoiding early elections and revising their coalition plans, which were considered as more Euro-friendly. The parties kept the law professor Giuseppe Conte as the next Prime Minister, though they decided to replace Paolo Savona with Giovanni Tria as the new Finance Minister. Note that the Italian President, Sergio Mattarella, rejected Savona on Sunday for taking the position, halting initial coalition attempts. In Spain, political turmoil continues, with the Spanish Prime Minister, Mariano Rajoy resigning from the role after being defeated in a no-confidence vote in Parliament. Pedro Sanchez, a socialist and pro-European, was named early today to fill the position. Conte will be sworn on Friday along with Cabinet Ministers.

Brexit updates will be in focus as well following reports Northern Ireland may be allowed to trade freely with both the EU and the UK under a common regime of customs regulations with those regions. Moreover, the idea includes a ten-mile-wide economic zone on the border with the Republic of Ireland, a measure to avoid checks.

In oil markets, Baker Hughes is scheduled to deliver its report on US oil rigs count at 1700 GMT, while on Saturday the focus will turn to Kuwait, where Saudi Arabia, Kuwait, and the United Arab Emirates will be holding discussions on supply.

As of today’s public appearances, Minneapolis Fed President Neel Kashkari – non-voting FOMC member in 2018 – will be participating in a panel discussion at 1255 GMT, while at 1310 GMT Bank of England Chief Economist Andy Haldane will be giving a lecture.

A G7 meeting between finance ministers and central bankers with a theme “Investing in Growth that Works for Everyone” will gather attention as well. The meeting is scheduled to conclude on June 2. 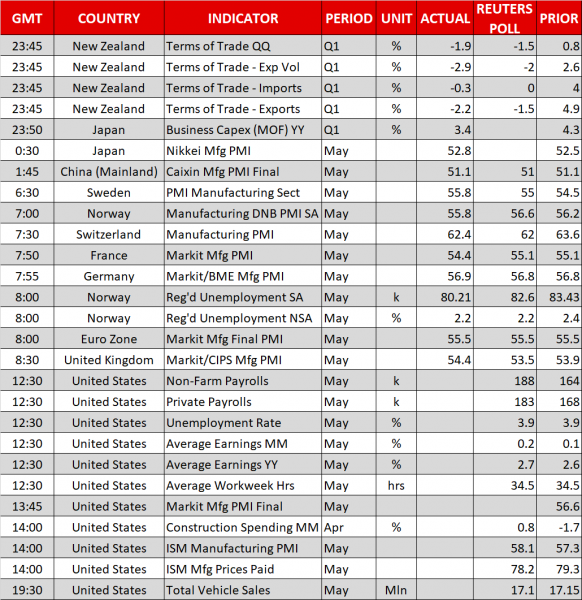