Monday June 4: Five things the markets are talking about

Last week, geopolitical events again captured the attention of capital markets even though critical economic data had been released.

With political concerns about the eurozone having somewhat eased by week’s end – in Italy, nationalist parties finally took power, while in Spain, the Socialist led-opposition ousted PM Rajoy with a no-confidence vote Friday – market attention turns back to trade this week as the U.S is headed for a showdown with its G7 allies at a summit in Quebec, Canada (June 8-9).

After the U.S imposed steel and aluminum tariffs on E.U, Canadian and Mexican imports, political tensions and the risk of a global trade war are back in focus, making this week’s summit more important than usual.

Overnight, global equities rallied as investor optimism for the U.S economy trumped investors’ concerns over tariffs and protectionism. U.S Treasuries slipped alongside the ‘mighty’ dollar, while sterling (£1.3389) and the EUR (€1.1724) found some traction.

In Japan, the Nikkei share average rallied overnight, tracking Friday’s Wall Street’s gains after May’s NFP report pointed to further strength in the U.S economy, while a weaker yen (¥109.60) supported stocks of Japanese exporters. The Nikkei ended up +1.37%, while the broader Topix gained +1.46%.

In China, stocks ended higher overnight, supported by a rebound in consumer and real estate shares. However, gains are capped as worries over credit risks persist and as investors watched the development of Sino/U.S trade talks. The blue-chip CSI300 index rose +1.0%, while the Shanghai Composite Index rose +0.5%.

Note: China warned the U.S yesterday that any agreements reached on trade and business between the two countries will be void if Washington implements tariffs.

In Europe, regional bourses opened higher and have continued in the ‘black,’ supported in general by positive sentiment following resolution of the political situation in Italy and Spain. 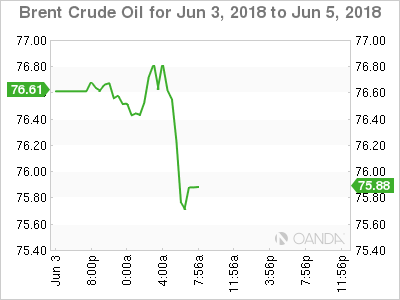 Note: Last week, the U.S contract lost -3%, adding to a near -5% decline from the week before.

According to EIA data last week, U.S crude production climbed in March to +10.47m bpd, a new monthly record, while U.S drillers added two oilrigs in the week to June 1, bringing the total to +861, the most since March 2015. That is the eighth time U.S drillers have added rigs in the past nine-weeks.

On the weekend, OPEC ministers from Saudi Arabia, the United Arab Emirates, Kuwait and Algeria along with their counterpart from non-OPEC Oman met “unofficially” in Kuwait and agreed on the need for continued cooperation between members.

Note: OPEC will meet formally on June 22 to set oil policy. It is expected to agree to raise output to cool the market amid worries over Iranian and Venezuelan supply.

Ahead of the U.S open, gold prices trade in a tight range as persistent concerns about trade wars between the U.S and the rest of the world offset expectations of a U.S interest rate hike this month. Spot gold is unchanged at +$1,293.23 per ounce, after hitting its lowest in two weeks at +$1,289.12 in Friday’s session. 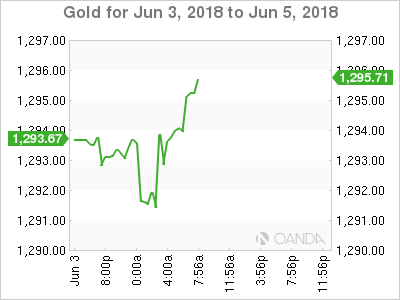 Italy’s bond market continued its recovery this morning as investors took comfort, for now, from the creation of a government in Rome that ends months of political turmoil, while the risk of more U.S rates hikes added to a selloff in German debt.

Short and long-dated Italian bond yields, which aggressively backed up last week on fears that the possibility of a new election might have effectively become a referendum on euro membership, have eased – Italy’s 2-year bond yield is down -23 bps at +0.79%, having briefly surged last week to 5-year highs around +2.7%. 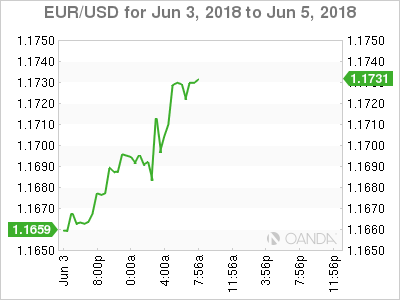 The ‘mighty’ USD (€1.1724, £1.3389, ¥109.63 and C$1.2914) is a tad softer starting a new week. Aside from the cited reasons above, the dollar has come under pressure after the White House Economic Advisor Kudlow publically warned, over the weekend, that trade escalation might weaken the U.S economy.

Not helping the dollar’s cause is the U.S Treasury yield curve has undergone a “bear flattening” following the release of Friday’s strong U.S payrolls (+223k and +3.8% unemployment).

Note: Fixed income dealers are now pricing in a fourth Fed hike for this year.

EM currencies are also firmer outright. The TRY ($4.6211) has found support after stronger than expected inflation data suggested that the CBRT could again act and show its independence this Thursday (June 7). However, consensus is expecting the CBRT will leave the one-week repo rate – which is now its key policy rate – unchanged at +16.50% 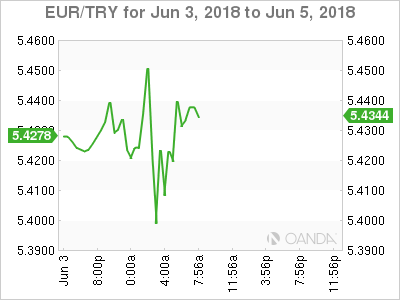 E.U data this morning showed that prices of goods leaving the eurozone’s factory gates were unchanged in April. This would suggest that inflationary pressures remain modest despite a recent rise in energy prices. The market consensus was expecting a +0.5% rise on month.

Note: Data last week showed that CPI hit the ECB’s target for the first time in more than a year during May, but that was largely due to a jump in energy prices.

In the U.K, the details of the Markit survey (construction PMI 52.5 vs. 52) revealed that commercial activity growth accelerated to a three-month high in May, but showed “softer expansions” in residential and civil engineering activity. Digging deeper, new order books meanwhile contracted for the fourth time in the past five months. 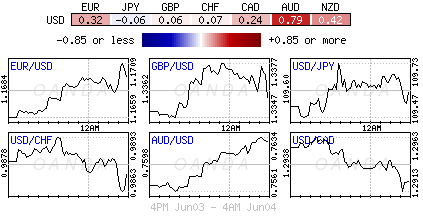