Capital markets seem content to regroup after recent developments. However, with President Trump stepping up his aggressive trade policies and the ‘populists,’ who are poised to start, governing in Italy, there remains plenty of reasons for caution.

For the intraday investor, the global landscape has not been easy to navigate, since market’s flutter day-over-day from risk-aversion and risk-on while ignoring most economic fundamentals. Aside from Trump drive by tweets, interest rate differentials and politics continue to be the biggest supporter for volumes.

Overnight, Euro and Asian shares were either small down, or trading in a holding patter, while sovereign bond moves have been mixed. G7 currencies again have been confined to a tight range as crude oil climbs.

Down-under, Aussie equities again underperformed Asia-Pacific counterparts, dented by an early overnight slip in commodities. The S&P/ASX 200 ended down -0.5% to erode most of previous sessions rebound. In S. Korea, the Kospi lost –o.15%.

Note: China’s services sector expanded at a solid pace last month, with companies accelerating hiring on the back of the strongest optimism for future growth in 11-months.

In Europe, regional stocks opened slightly lower across the board and have since reversed to trade mixed. Currently, Italy is the best performer as PM faces first round of confirmation votes. 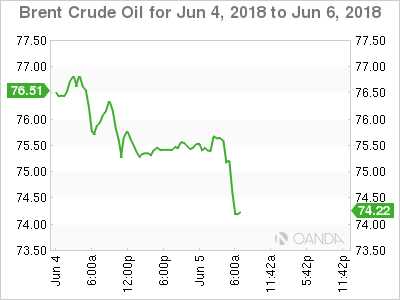 Oil prices have rebounded a tad on expectations that U.S inventories may decline, but increasing U.S production and concerns that OPEC may raise output continue to provide resistance.

OPEC is due to meet in Vienna on June 22 to decide whether the group, including Russia, will raise output to ease concerns over potential supply shortfalls from Iran and Venezuela.

Investors will take their cues from this week’s production and supply data. U.S stocks, the world’s biggest oil consumer, are expected to fall about -2.5m barrels on average in the week ended June 1.

Note: The number of rigs drilling stateside is up by two in the week to June 1, bringing the total to 861, the most since 2015.

Ahead of the U.S open, gold prices are little changed overnight, after closing lower in three previous sessions, as investors seem to be opting for riskier assets amid increasing prospects of another Fed hike following strong economic data. Spot gold is flat at +$1,291.51 per ounce, while U.S gold futures for August delivery are down -0.1% at +$1,295.60 per ounce. 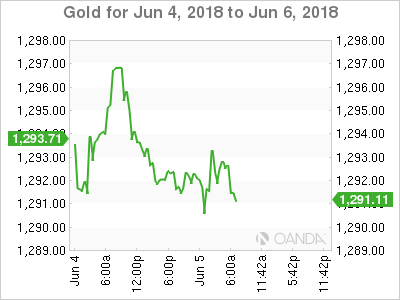 Higher yields are being supported by Fed funds futures, which are showing an increase in the odds the Fed will raise interest rates three more times this year. That probability has rallied to +40% yesterday from +34% on Friday.

Note: They odds fell as low as +13% last week after the minutes from the Fed’s May meeting reflected a preference for a gradual path of rate increases, and concerns about Italy’s antiestablishment coalition government rose.

Elsewhere, eurozone periphery government bonds – Italy, Spain and Portugal -trade slightly weaker this morning, indicating the fragility of the recovery from massive selloffs at the beginning of last week.

As expected, the Reserve Bank of Australia (RBA) kept overnight rates on hold at +1.5%. Their June policy statement last night was generally in line with the previous months, however it noted the political situation in Italy and economic developments in emerging markets. The central bank also alluded, for the first time, to the misbehaviour of domestic banks. 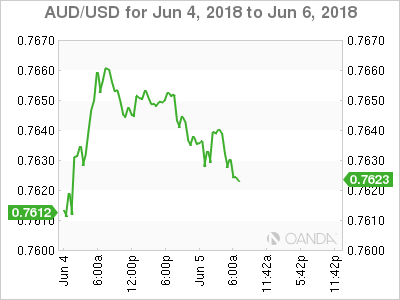 4. Dollar confined for the time being

The USD remains steady in a tight range overnight, but is off its recent cycle highs against G7 currency pairs.

The GBP (£1.3378) is slightly higher on stronger U.K services PMI print (see below). Brexit talks on the future relationship between the U.K and EU are set to resume in Brussels this week. U.K government has stated that the Brexit withdrawal bill would return to the House of Commons on Tuesday, June 12 setting up a showdown as about a dozen backbenchers threatened to inflict a defeat in a vote over future customs arrangements.

Note: The E.U has previously asked for clarity on Brexit from the U.K as the run-up to the EU Summit on June 28 and 29th. 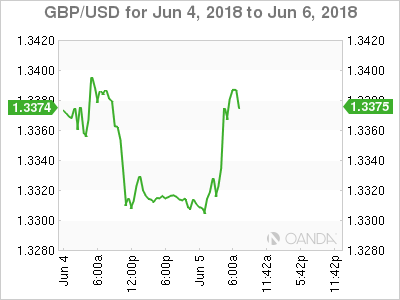 5. U.K. services PMI picked up in May

U.K data from Markit this morning showed that activity in the U.K’s dominant services sector picked up last month, adding to recent indications the economy is rebounding from a weak start to the year. Their measure of activity rose to 54.0 in May from 52.8 in April, it’s highest for three-months.

Note: The U.K economy slowed sharply in Q1, prompting the BoE to forgo an expected rate hike at their May meeting. However, officials signalled that they still expect to tighten policy if that slowdown proves to be short-lived.

A similar survey of manufacturers released last Friday also pointed to a May pickup.

Markit’s chief business economist stated that “the signs of economic growth rebounding in Q2 will likely up the odds of the BoE hiking interest rates again in coming months, likely August.”

Nevertheless, the outlier for many remains Brexit, U.K businesses continue to look clarity and direction from policy makers with Brexit less than a year away. 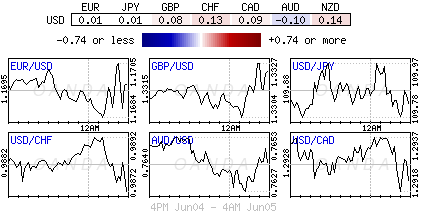