The US dollar is lower against major pairs after the U.S. Federal Reserve raised the benchmark Fed funds rate by 25 basis points on Wednesday. The move was heavily anticipated by the market, but the strong pace of the US economy could mean more rate hikes. The latest projections from the US central bank now have 8 Fed official forecasting four rate hikes in 2018. The USD gained as soon as the projections and the rate announcement were public, but there was a sudden retraction when the news of the Trump administration moving forward with tariffs on Chinese goods that could come as early as Friday. Fed Chair Jerome Powell was asked about his view on trade during the press conference following the FOMC statement but he choose to sidestep by mentioning that the Fed does not seek to play a role in trade policy.

The EUR/USD gained 0.39 percent on Wednesday. The single currency is trading at 1.1777 after the U.S. Federal Reserve lifted rates to the 175–200 basis points range as expected. While the market had anticipated the move the surprise came in the more hawkish projections and language used by the members of the FOMC. While awaiting for Fed Chair to deliver his prepared remarks and to field questions from the financial press a report that the Trump administration is finalizing a list of Chinese goods to be subject to additional tariffs hit the US dollar like a ton of bricks. The upward momentum from higher rates was lost as once again the US is ready to fire another shot in what seems an impending trade war. 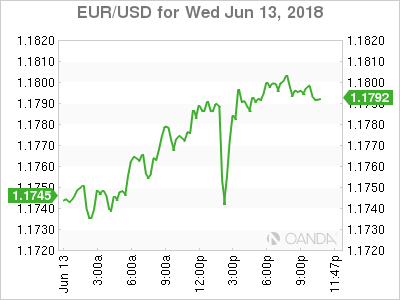 The European Central Bank (ECB) will follow the lead from the U.S. Federal Reserve and is expected to tighten monetary policy. The central bank could start laying out their exit strategy after its massive QE program comes to an end. The market forecasts a tapering from the 30 billion euros a month down to zero in early 2019. The ECB has not validated that estimate, and could potentially wait until its July meeting to outline its monetary policy plans.

Eurozone growth is slowing down and rising political uncertainty as evidenced by the formation of the Italian government will give the ECB food for thought. The central bank has already acted too fast with monetary policy only to be forced to undo those decisions. The hardest trick for ECB President Mario Draghi will be to end the QE program and avoid a resulting taper tantrum.

The USD/CAD fell 0.20 percent in the last 24 hours. The currency pair is trading at 1.3003 after the U.S. Federal Reserve raised borrowing costs by 25 basis points. The pressure will now be on the Bank of Canada (BoC) to try to keep the rate gap from expanding further. The Canadian interest rate stands at 1.25 percent. The BoC will meet in July with a growing probably of a rate hike announcement. 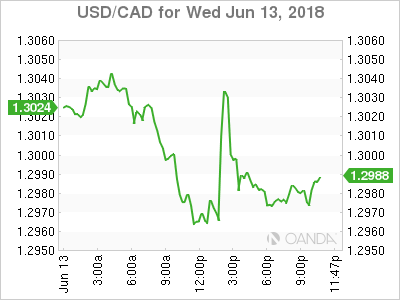 The main headwind against the loonie has been the uncertainty about NAFTA. The trade agreement has been under constant threat as the Trump administrations has not show willingness to sit down and negotiate. The Foreign Affairs Minister Chrystia Freelander will meet with her counterpart Trade Representative Robert Lighthizer on Thursday. She has already met with the US Senate foreign relations committee. Trade is the obvious topic of discussion after the G7 meeting ended in a tense exchange as US President Donald Trump made its way to Singapore.

Oil prices surged with West Texas Intermediate trading at $66.63. US crude inventories came in way under expectations with a drawdown of 4.1 million barrels when a shortage of 1.4 million was forecasted. Crude reached a two week high despite the Energy Information Administration (EIA) publishing a report that shows US oil production is on the rise. Organization of the Petroleum Exporting Countries (OPEC) and Russian production has increased ahead of their talks in Vienna to review the supply cut agreement.