Cannot Keep the ‘Big’ Dollar Down

The European and Asian sessions were happy to book ‘long’ dollar profits, but North America has decided to renew their acquaintance with the dollar bulls.

A lack of major economic data releases and a stabilizing Chinese yuan overnight provided a temporary reprieve for risk assets and EM currencies.

Another strong JOLTS jobs opening report (+6.66M) has provided the dollar some early support, enabling it to retrace some of its overnight losses.

Trading GBP/USD (£1.2943) is proving to be a bit like the Wild West – unpredictable – the pound is again threatening to penetrate yesterday’s record 12-month low now that its failed to benefit from last week’s Bank of England rate rise. Markets are now turning their attention to the Brexit process, which will likely dominate trends in GBP for the remainder of this year. 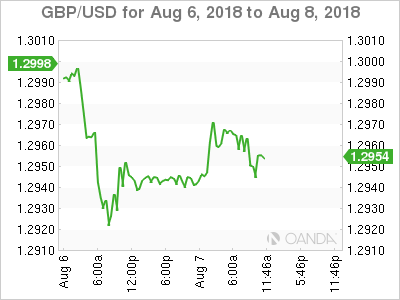 USD/CAD (C$1.3020) is another early looser against the dollar, despite crude oil prices remaining better bid now that the U.S has re-introduced sanctions against oil exporter Iran that is expected to tighten global supply.

The loonie has lost some appeal with the Can Ivey July PMI producing a disappointing headline (61.8 vs. 64.2). Dollar bulls want to see C$1.3040 break before adding to their ‘short’ CAD positions again.

The Turkish lira ($5.2492) has recovered some lost ground after plummeting to new record lows yesterday ($5.42), helped by the Central Bank of the Republic of Turkey (CBRT) announcing a cut in the foreign exchange reserve requirement ratio (RRR) for commercial banks, a measure which should boost dollar liquidity. Turkish 10-year bond yields have backed up +25 bps to +20%. 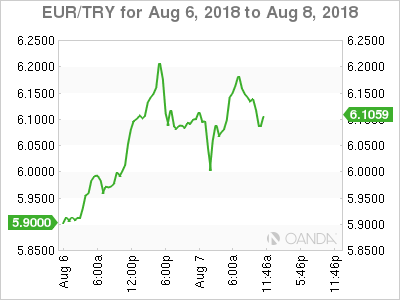 However, the plunge in the currency over the past few weeks is now on a scale, which has, in the past, prompted the CBRT to hike interest rates aggressively. Will the CBRT hike the repo rate this week? They need to, but will they dare defy President Recep Tayyip Erdogan?

With little economic data to hang your hat on, low volumes and market participation, most investors prefer to wait for a significant breakout in any of the G7 pairs before participating with any gusto.