FOREX: The US dollar index – which measures the greenback’s performance against a basket of six major currencies – is down by 0.13% on Wednesday, extending the pullback that started in the previous session. The euro capitalized both on the dollar’s correction and on some weakness seen in sterling. Meanwhile, the loonie plunged even in the absence of any NAFTA news.

STOCKS: US markets continued their upward march on Tuesday, with the lack of any significant escalation on the trade front and strong earnings results fueling the optimism. The Dow Jones rose by 0.50% and for the fourth consecutive day, while the Nasdaq Composite and the S&P 500 gained 0.31% and 0.28% respectively. Both the S&P and the Nasdaq are now within breathing distance of their all-time highs. That said, futures tracking the Dow, S&P, and Nasdaq 100 are all pointing to a negative open today, albeit only marginally so. Asia was mixed on Wednesday. In Japan, the Nikkei 225 and the Topix inched lower by 0.08%, but in Hong Kong, the Hang Seng rose by 0.17%. In Europe, all the major indices were set for a lower open today, according to futures.

COMMODITIES: In energy markets, oil prices are more or less flat on Wednesday, following some gains in the previous session. WTI is practically unchanged at $69.16 per barrel, while Brent is down by a marginal 0.07% at $74.57. The precious liquid responded little to data released overnight showing that China’s crude oil imports rose by 1.5% in July, recovering from the six-month low hit in June. In precious metals, gold prices are up by 0.15% at $1,215, capitalizing slightly on the correction lower seen in the US dollar. 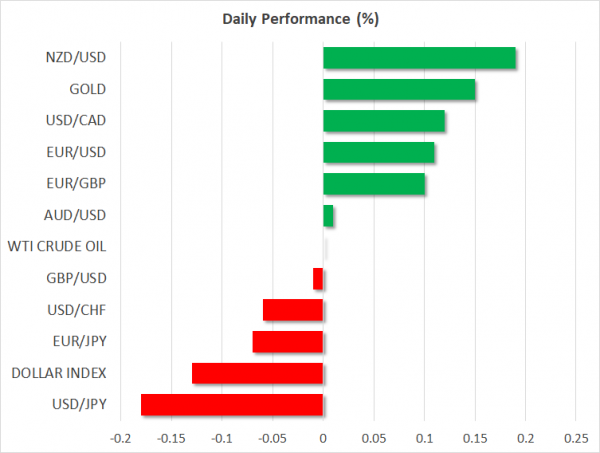 The euro was the winner in Tuesday’s session, advancing against most of its major counterparts, and most notably versus the battered British pound, which has been suffering at the hands of speculation for a no-deal Brexit. Euro/sterling is up by 0.1% on Wednesday as well, touching a fresh 8-month high of 0.8975 as the Brexit risk premium on the pound appears to be rising – with the latest cautious turn by the BoE likely amplifying the negative sentiment.

The dollar, meanwhile, corrected lower yesterday and has continued to retreat on Wednesday, with the dollar index being down by 0.13%. There was little in the way of fresh news flow or data releases to justify the move, so its underperformance may have been primarily a case of profit-taking, following recent gains.

Turning to commodity-linked currencies, the Canadian dollar saw a sharp selloff yesterday. Dollar/loonie surged by roughly 100 pips, from around 1.2960 to 1.3060, even despite a broadly weak US dollar and an uptick in oil prices. Given the absence of any developments around NAFTA, the loonie’s slide appears to have been owed mainly to a softer-than-expected Ivey PMI for July, released yesterday.

In the antipodeans, kiwi/dollar is up by 0.18% today, after the RBNZ released its 2-year inflation expectations for Q3 overnight. The print rose only marginally, to 2.04% from 2.01% previously, but still probably enhanced the narrative that inflationary pressures in New Zealand are slowly mounting. Now, all eyes turn to the RBNZ policy decision at 2100 GMT. Aussie/dollar is nearly flat today, unable to extend its RBA-induced gains from yesterday, even despite some stronger-than-expected trade data from China overnight.

In equities, all eyes were on Tesla yesterday (+10.99%), after CEO Elon Musk tweeted he is considering taking the electric car-maker private. He suggested shareholders would be offered $420 per share, much higher than the $342 the stock was trading at prior to his announcement, or even the $379 that the share closed the day at. The decision is not final yet, pending a shareholders’ vote.

Day ahead: RBNZ meeting in focus; trade developments remain in the spotlight

The highlight out of Wednesday’s calendar will be the conclusion of the RBNZ meeting on monetary policy.

Canadian building permits data for June will be made public at 1230 GMT.

The Reserve Bank of New Zealand’s rate decision is due at 2100 GMT, with the central bank widely anticipated to maintain its policy rate at the record low of 1.75%. During its latest meeting, the Bank tilted dovish by saying that the next move in rates could be both higher or lower, putting the prospect of a rate reduction back in focus amid rising risks. Should this pick up traction upon completion of the meeting, then the kiwi is expected to come under pressure. If, on the other hand, the statement accompanying the decision and the Governor Adrian Orr during the press conference at 2200 GMT paint a positive picture on the outlook for the economy, then the NZD is likely to rise. Any comments by the Bank on the state of global trade and how it can affect New Zealand’s economy are also likely to attract attention.

Remaining on trade, tensions between the US and China remain in place, with the former saying it will begin applying 25% duties on an additional $16 billion worth of Chinese imports in two weeks’ time.

Richmond Fed President Tom Barking – a voting FOMC member in 2018 – is scheduled to deliver a speech at 1230 GMT.

In energy markets, oil traders will be paying attention to weekly EIA data on US crude stocks due at 1430 GMT; a drawdown by around 3.3 million barrels is anticipated during the week ending August 3 after a buildup by roughly 3.8m barrels in the previously tracked week. 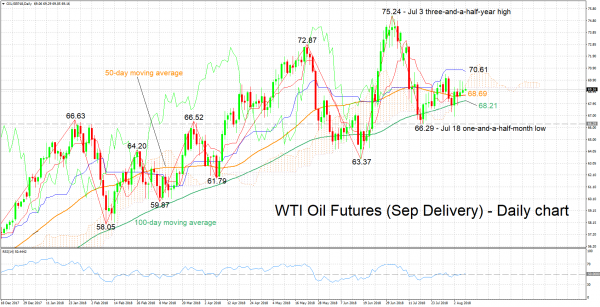 WTI oil futures (September delivery) have been moving within a relatively narrow range between roughly 67 and 70 since late July. The Tenkan- and Kijun-sen lines are negatively aligned though the two have been largely moving sideways in recent days, on balance projecting a neutral picture in the short-term. The RSI, which is at the 50 neutral-perceived level and has been moving around this point lately, also lends credence to the view for a neutral near-term bias.

Should today’s EIA report show a lager drawdown in crude stocks than anticipated, then prices may rise. Immediate resistance may be taking place around the Ichimoku cloud bottom and top at 69.30 and 69.54 respectively. Further above, the Kijun-sen at 70.61 would be eyed, with the three-and-a-half-year high of 75.24 increasingly coming into scope in case the Kijun-sen is violated to the upside.

If the data reflect a smaller-than-expected drawdown or a buildup in stocks however, prices may head lower. Initial support to losses could come around the current levels of the 50- and 100- day moving average lines at 68.69 and 68.21 correspondingly. Sharper losses would turn the focus the one-and-a-half-month low of 66.29 hit on July 18