Euro Struggles At 1-Year Lows Amid Political Noise, US CPI Inflation Next In Focus

FOREX: The US dollar index, which measures the dollar’s strength against a basket of six major currencies, headed higher by 0.55% on Friday, while dollar/yen fell by 0.08% below the 111.00 handle as demand for safe havens and upbeat Japanese flash Q2 GDP growth figures provided support to the yen. The euro dropped to the weakest level in a year, probably on the ECB’s concerns that the plunge in the Turkish lira could expose Eurozone banks (see below), while the central bank also warned on Thursday that Trump’s trade frictions could destabilise the global economy as tariffs are set to reach the highest level in 50 years. Euro/dollar dipped by 0.54% today, extending losses below the 1.1500 psychological level to reach one-year lows at 1.1431. Moreover, pound/dollar plunged to a new more-than-a-one-year low, losing 0.40% on the day, despite Britain’s preliminary UK Q2 GDP growth figures rising as expected and manufacturing and industrial productions stats growing faster than projected. The antipodean currencies posted sell-offs as well. Aussie/dollar plummeted by 0.87%, hitting a 19-month low, while kiwi/dollar dived by 0.35% to a new more than two-and-a-half-year low. Meanwhile, dollar/lira skyrocketed on Friday by 6.61%, posting a fresh record high above 6.000.

STOCKS: European equities have been declining considerably on Friday at 1100 GMT. The pan-European STOXX 600 dropped by 0.84% and the blue-chip Euro STOXX 50 declined by 1.35%, with basic materials and technology leading the losses. The German DAX 30 dived by 1.54%, recording a one-month low, while the French CAC 40 tumbled by 1.10%. The Italian FTSE MIB lost 1.56%, while UK’s FTSE 100 saw a softer loss of 0.68%. Futures tracking US stock indices were all in the red, pointing to a negative open.

COMMODITIES: Oil prices were recording moderate gains at 1100 GMT as renewed US sanctions against Iran which took effect on Tuesday could slash Iranian oil supply. West Texas Intermediate (WTI) crude oil and the London based Brent were up at $66.97 (+0.24%) and at $72.29 (+0.31%) per barrel respectively. In precious metals, gold was down by 0.12% at $1210/ounce, holding near its multi-month lows. 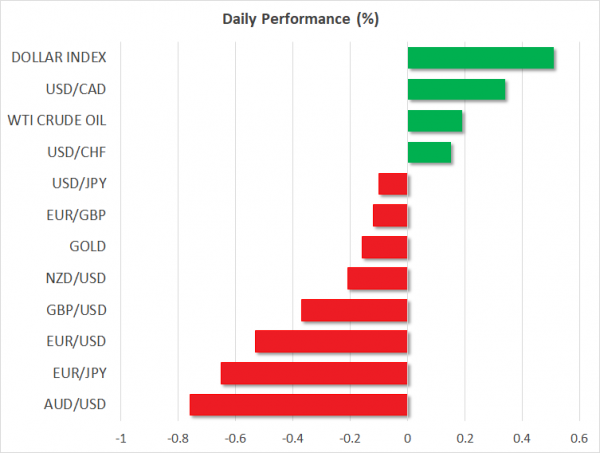 Day ahead: US CPI to pick up steam; political & trade tensions in focus

US consumer prices and Canadian employment figures will attract the most interest in terms of data releases later in the day, with trade and political developments also being under the spotlight as tensions between the US and the rest of the world are rising.

At 1230 GMT, the US Bureau of Statistics is expected to say that consumer prices have picked up speed for the fifth consecutive month in July, rising from 2.9% year-on-year (y/y) to 3.0%, the highest growth recorded since January 2012. Excluding volatile items, however, the core equivalent is said to remain unchanged at 2.3% y/y, near 1 ½-year highs. While CPI figures are not the Fed’s preferred inflation measure, the gauge is still closely monitored by policymakers and any improvement in the numbers could signal rising inflationary pressures. Therefore, in the wake of stronger CPI prints, optimism on the US economy could strengthen and the dollar could move higher on growing speculation that the Fed’s preferred PCE inflation measure could gain positive momentum as well, increasing the odds for two additional rate hikes this year.

On the trade front, the US dispute with China continues to escalate, with the latter showing no signs of simply giving in to US demands.

In geopolitics, the Trump administration is warning to unleash new sanctions against Russia, aiming to punish the nation for allegedly poisoning a former Russian spy in Britain earlier this year. The message was echoed in Russia, with the Russian Prime Minister, characterizing the US’ stance as a declaration of an economic war. In the wake of the news, dollar/rouble hit an almost two-year high at 67.15 today. In the meantime, the Turkish lira was also under severe pressure, plunging to a fresh record low against the greenback as talks over the detention of a US pastor in Washington between a Turkish delegation and US officials failed to lead to a constructive outcome. At 1100 GMT, a speech by the Turkish President could add further volatility to the Turkish currency. Note that the lira’s underperformance raised fears in the eurozone as well, with the ECB expressing concerns that the downfall could leave Eurozone banks exposed to default loans by Turkish borrowers according to a Financial Times report. Moreover, any deterioration in Turkey’s economic conditions could affect the country’s ability to accommodate migrant flows.

In Canada, loonie traders will be eyeing July’s employment report which is expected to show an increase in employment by 17k positions, almost half the 31.8k rise seen in June. But the unemployment rate could bring some smiles to BoC policymakers’faces as this is anticipated to pull back to 5.9% after reaching 6.0% in June.

In oil markets, Baker Hughes is scheduled to report on US active rigs for oil drilling at 1700 GMT. 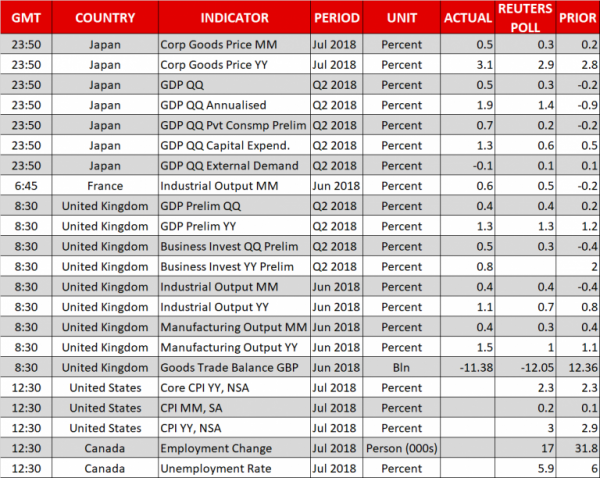