Chinese official PMI data for August are due on Friday at 0100 GMT. Manufacturing activity, which is expected to gather the most interest, is anticipated to ease for the third straight month, though to yet again remain in growth territory. Beyond data releases, US-China trade considerations are still at play, with any updates likely to prove market-moving.

Figures out of the world’s second largest economy are projected to show manufacturing PMI standing at 51.0 in August, below July’s 51.2 and at its lowest since February. Despite declining in recent months, it is notable that last month’s reading constituted the 24th straight print that exceeded the 50 level that distinguishes sectoral expansion from contraction. Meanwhile, August’s non-manufacturing (services) PMI is forecast to slightly weaken to 53.8, from July’s 54.0. Most attention out of Friday’s releases is likely to again fall on manufacturing numbers. This, despite the Chinese services sector coming under greater prominence over the last few years on the back of state efforts to rebalance as well as diversify the economy, rendering it more dependent on services and consumer spending, as opposed to relying almost entirely on investments and export-driven growth for its economic development. 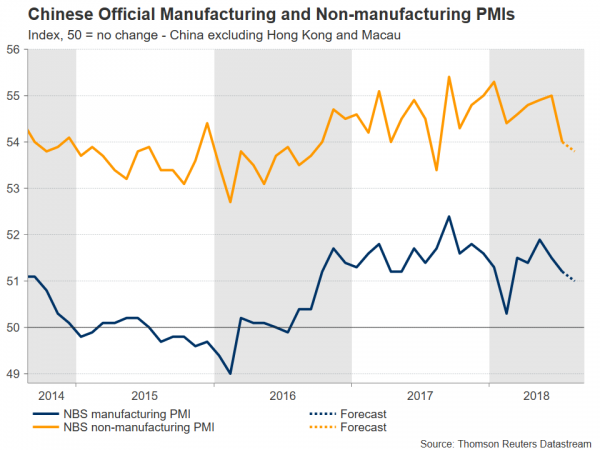 China’s trade spat with the US was one of the factors leading to the fall in July’s manufacturing activity, though it also bears mention that continuing efforts by policymakers to reduce financial risks stemming from rising debt and unfavorable weather conditions were mostly to blame for the slowdown. Still, the ongoing dispute between the world’s two biggest economies continues to pose risks for the outlook of manufacturing and the economy overall and has contributed to the onshore and offshore yuan’s slide to its lowest since January 2017 versus the greenback in mid-August; the chart below shows the onshore yuan against the dollar. 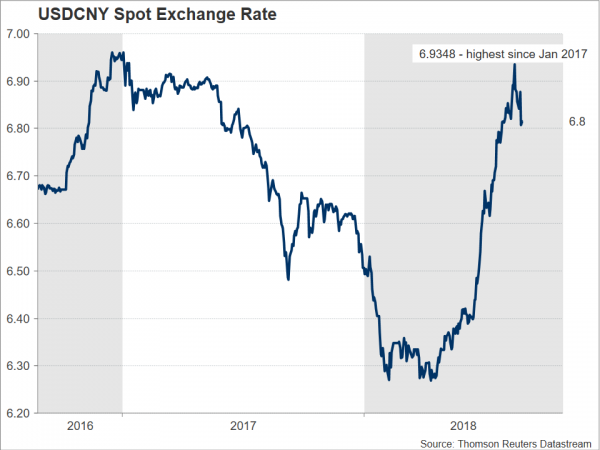 While further escalation in the Sino-US trade spat has not taken place recently, last week’s talks between the two sides do not appear to have provided much “tangible” outcomes, with the risk being that the next round of tariffs – 25% on $200 billion of Chinese imports – is implemented over the coming weeks, with China responding in retaliatory fashion. The risk for a tough stance and rhetoric by the US may also be tilted to the upside, in light of the midterm elections taking place in November, as President Trump and the hawks in his administration may view such an approach as resonating well with the Republican base. On the other side of the spectrum, there is also talk of a Trump-Xi meeting later in the year that may alleviate tensions. However, nothing concrete has been announced thus far.

Elsewhere, Trump accusing China of undermining US efforts to pressure North Korea to end its nuclear plans may be an indication that the trade confrontation is moving into other directions. It remains to be seen whether another chapter in the “US vs China” saga will be written soon, something which would most probably weigh on market sentiment and thus risk-on plays.

In FX markets, besides the yuan, the Australian dollar is also generating attention ahead of the upcoming Chinese readings, as well as concerns over trade. This is owed to the fact the Australian economy heavily depends on commodity exports, with its economy seen as losing in the event of a less rosy outlook for global trade. Additionally, Australia shares close economic ties with China – a strong Chinese economy is seen as Aussie-positive and vice versa – which have rendered the Aussie as a liquid proxy for China’s economy.

Technically, an advancing AUDUSD on the back of upbeat Chinese numbers or easing trade worries may meet resistance from the zone around the current level of the 50-day moving average at 0.7370 and the 23.6% Fibonacci retracement level of the January 26 to August 15 downleg at 0.7421. Notice that the area around this zone was congested in the past, as well as that it encapsulates the 0.74 round figure. Also, this area would come into scope given that a break above the 0.73 handle takes place first. Further above, the 100-day MA at 0.7465 would be eyed. On the downside and in the event of disappointing figures or a deteriorating trade outlook, support could come around the one-and-a-half year low of 0.72 recorded on August 15, with steeper losses potentially finding support around the 0.71 mark.

It should be kept in mind that China will also be on the receiving end of Caixin’s respective prints on the manufacturing and services sectors on Monday and Wednesday correspondingly. These focus on small and medium size businesses, with Friday’s official data being broader in nature.

Lastly, there have been some recent policy adjustments on China’s fiscal and monetary front meant to support the economy. It will be interesting to see whether the effects from these start to feed into the data soon, and in particular in the above mentioned releases.