Monday September 24: Five things the markets are talking about

Global equities are under pressure as China called off planned trade talks with U.S, potentially triggering an escalation in the tariff war between the world’s largest economies.

Note: U.S’ tariffs on +$200B in China goods took effect at midnight, while China’s counter tariffs on +$60B of U.S goods also came into effect this morning.

Presidents Trumps’ veiled threat to OPEC to increase global crude supply was met with a tepid response over the weekend. The Saudi oil minister said that the market was adequately supplied.

The ‘big’ dollar continues to find support on pullbacks, while Treasuries trade under pressure along with Euro sovereign bonds.

Topping investors’ agenda this week is the FOMC meeting along with the Fed’s updated forecasts and the chair’s quarterly press conference (Sep 25-26). The market is looking for a third +25 bps rate hike and is pricing in another one for December. Investors await Fed chair Powell’s views on trade and tariffs.

Elsewhere, the Reserve Bank of New Zealand (RBNZ) will also meet Wednesday (Sept 26) and no rate hike is expected. The U.K posts its final estimate of Q2 GDP, while the Eurozone releases the September flash harmonized index of consumer prices (Sept 28). Also on Friday, Canada will release its monthly GDP data for July.

Asian volumes were light and liquidity a concern as markets in China, Japan, South Korea and Taiwan were closed for holidays. Both Hong Kong and South Korea will be closed on Tuesday.

Down-under, Aussie stocks edged lower overnight, as lower commodities prices hit materials stocks while financials slipped on new revelations of wrongdoing in the sector revealed in a quasi-judicial inquiry. The S&P/ASX 200 index fell -0.1% at the close of trade. The benchmark rose +0.4% on Friday.

In Hong Kong, stocks plummeted after the U.S imposed fresh tariffs on an additional +$200B of Chinese imports and as Beijing cancelled planned talks between the two sides. The Hang Seng Index fell -1.62%.

In Europe, regional bourses opened in the ‘red’ and continue to trade lower. Market risk sentiment continues to be impacted over trade concerns as U.S tariffs came into effect at midnight and China cancels trade talks – consumer discretionary sector among worst performers. 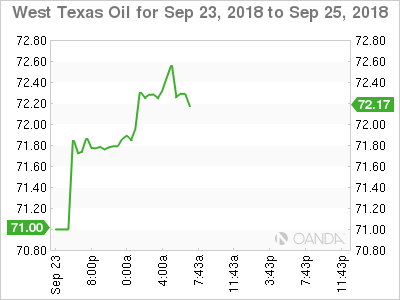 Yesterday in Algiers, both OPEC and Russia ruled out any immediate, additional increase in crude output, effectively rejecting Trump’s calls for action to “cool” the market.

The recent price rally has mainly stemmed from a decline in oil exports from OPEC member Iran due to fresh U.S sanctions.

Also, according to OPEC’s projections, a strong rise in non-OPEC production could exceed global demand growth, which could eventually put pressure on prices.

The market remains concerned about U.S inventory levels. U.S commercial crude oil inventories (EIA) are at their lowest level in three-years, and while output remains around the record of +11M bpd, recent subdued U.S drilling activity points towards a slowdown.

Gold prices have edged a tad lower this morning as the U.S dollar holds firm on news that China has cancelled trade talks with the U.S, while the market waits for this week’s FOMC meeting for guidance on future rate hikes. Spot gold is down -0.1% at +$1,198.36, after declining as much as -1.3% on Friday. U.S gold futures are little changed at +$1,201.60 an ounce. 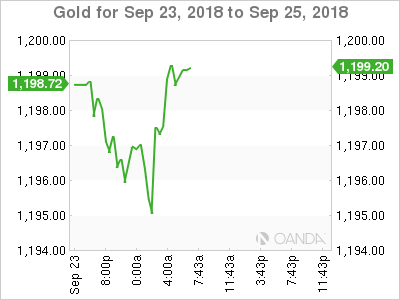 Some of the short-term rates banks in Hong Kong charge each other leapt to their highest levels in roughly a decade, in the first trading session after a sudden surge in the tightly controlled HKD.

Note: Speculators have been covering some significant ‘short’ HKD positions and the lack of liquidity has not helped the move.

Elsewhere, Italian government bond yields are backing up again this morning, again reflecting some unease among investors given this week’s deadline for the government to present its budget targets.

Note: ECB’s Mario Draghi speaks at the European Parliament later today, while on Wednesday; the Fed is expected to raise interest rates again. 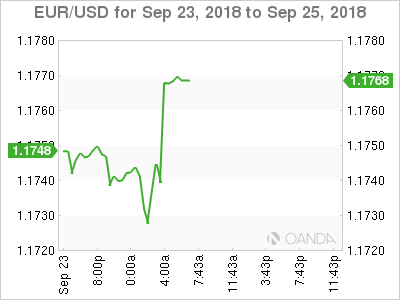 4. Dollar hold firms, but G7 does find some support

GBP/USD (£1.3123) remains handcuffed to Brexit rhetoric and PM May woes. Sterling has begun Monday’s session on the front foot, reclaiming the psychological £1.31 handle after comments from U.K Brexit Minister Raab indicated that he is confident he will make progress on Brexit. There are also whispers that PM May has started contingency planning for possible snap election in November – however, Raab reiterated that “no election is planned.”

The EUR (€1.1770) is again wading towards the key €1.18 handle. Consensus does not expect this week’s data or monetary policy decisions to mount a serious challenge to the ‘single unit’s recent rally. The FOMC meeting is due on Wednesday, but a +25 bps increase to +2.25% is already priced into EUR/USD. The government in Italy is expected to roll out new fiscal projections, but the 2019 budget deficit will probably be set at close to +2% of GDP, which is similar to where the deficit stands now. While eurozone inflation data later this week should provide the euro with “minor support.”

The INR continues to weaken; with the USD/INR rallying to an intraday high of $72.73. There have been rumours that Reserve Bank of India (RBI) has intervened to cap dollar gains. Trade concerns continue to weigh as China cancels trade talks with the U.S. 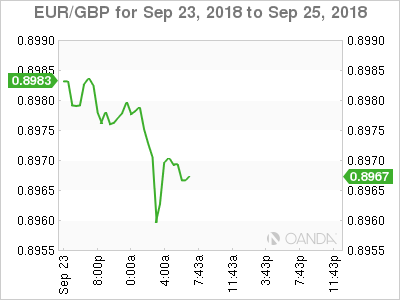 The Ifo business climate index decreased to 103.7 from an upwardly revised 103.9 in August, but still beat forecasts. The street had been looking for a decline to 103.2.

In manufacturing, managers were less content with the current situation in September compared with the month before. Business expectations, however, hit their highest level since February.

“Manufacturers plan to ramp up production in the months ahead,” according to the Ifo Institute. 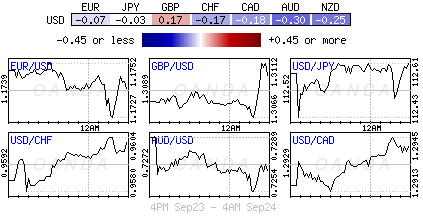