Wednesday October 3: Five things the markets are talking about

European markets have so far shrugged off losses in Asia to post gains this morning amid hopes that Italy’s budget deficit could be lowered, but concerns about the country’s debt and budget plans remain.

The EUR (€1.1573) has rallied from yesterday’s six-week lows on hopes that Italy’s draft budget plan will pledge to cut the deficit to +2% in 2021, revising the government’s initial proposal. Italian bonds have surged after four-days of selling.

At least for the time being, the lack of contagion in the rest of the eurozone bond market from the rise in Italian government bonds shows that the budget talks are still perceived as a local issue, and this despite, Italy’s +2.4% deficit plan is a significant deviation from previous commitments.

Elsewhere, U.S Treasury yields remain atop of their recent highs after Fed Chair Powell yesterday welcomed wage growth, but expressed confidence that low unemployment would not support inflation that would require aggressive tightening.

Later this morning, U.K PM Theresa May will be speaking at the Tory party’s annual conference. Expect Brexit rhetoric to affect a hypersensitive sterling.

In Japan, equities came under pressure overnight as automakers fell on a sharp decline in U.S new car sales last month and while financials retreated mostly on profit taking. The Nikkei share average lost -0.7%, though it was still holding at 27-year highs. The broader Topix fell -1.2%.

Down-under, Aussie stocks rallied from strong gains in resource-related stocks overnight, helped by higher gold and metal prices, while financials ended lower despite earlier gains. The S&P/ASX 200 index rose +0.3% at the close of trade. The benchmark fell -0.8% on Tuesday.

Note: Both China and S. Korea were closed for a holiday.

In Hong Kong, stocks fell for a second consecutive day, with investors staying on the sidelines preferring to look for hints on policy direction from China. The Hang Seng Index was down -0.52%.

In Europe, regional bourses have opened higher across the board. Investor risk sentiment has improved after Italian press reports new budget plans (see below). The financial and Telecom sector are the best performers, while the material sector is underperforming. Germany is closed for a holiday. 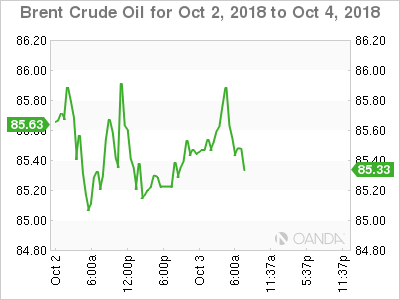 2. Oil trades atop of its four-year highs

Oil trades atop of its four-year highs this morning, supported by expectations that U.S sanctions on Iran will tighten supply and strain the ability of the Saudi’s and other producers to pump more.

Crude exports from Iran, OPEC’s third-largest producer, are already falling as the U.S sanctions kick in on November 4 deters buyers.

A recent survey of OPEC production found Iranian output in September fell by -100K bpd, while production from the group as a whole rose by +90K bpd from August.

Note: Crude prices have roughly tripled from lows hit in January 2016 after the OPEC and Russia cut output.

OPEC has so far ruled out any further production increase, beyond delivering the boost agreed in June, despite prices rallying further and more pressure from Trump. 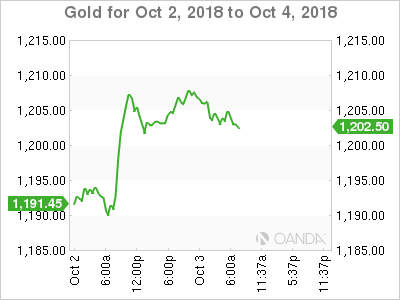 In Europe, Italian bonds are rallying as some of the yesterday’s worries have eased on signs that Rome is open to cutting its budget deficits and debt in coming years. 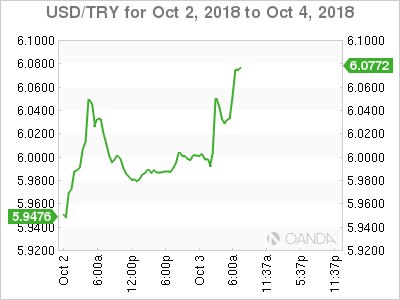 The Turkish lira is under pressure after data this morning showed annual Turkish inflation jumped to +24.52% in September from +17.90% in August, lifting USD/TRY to a five-day high of $6.0912.

Note: The Central Bank of the Republic of Turkey (CBRT) has been reluctant in the past to hike rates to curb inflation, especially since President Erdogan has previously expressed a preference for lower interest rates.

The EUR (€1.1565) continues to be driven by the Italian budget projections, this time going up on reports that Italy may not pencil in another 2.4% deficit-to-GDP projection for 2020 and 2021.

Sterling (£1.3004) is again trading atop of the psychological £1.30 handle. Expect the pound to remain hypersensitive to Brexit comments from PM Theresa May when she addresses party members at the Conservative party conference this morning.

Data this morning showed Eurozone retail sales fell for a second straight month in August, which may suggest that that economic growth has yet to rebound significantly from a slowdown in H1.

Eurostat reported retail sales across the 19-countries that use the ‘single’ unit was -0.2% lower in August than in July, although +1.8% up on the same month of 2017.

Last year, a surge in exports drove eurozone economic growth, but a weakening in overseas sales has been behind a loss of momentum this year. That has left the economy more reliant on household spending to drive the expansion, and falling retail sales are a major concern.

Note: Eurostat also cut its estimate for July to -0.6%, having previously calculated that sales fell by -0.2%.

Digging deeper, the drop in sales comes despite a fall in eurozone unemployment and a pickup in wage growth. But energy prices have risen more sharply over recent months, eating into the income available to spend on other goods and services. 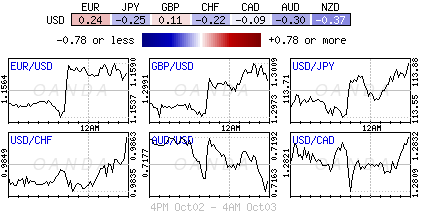