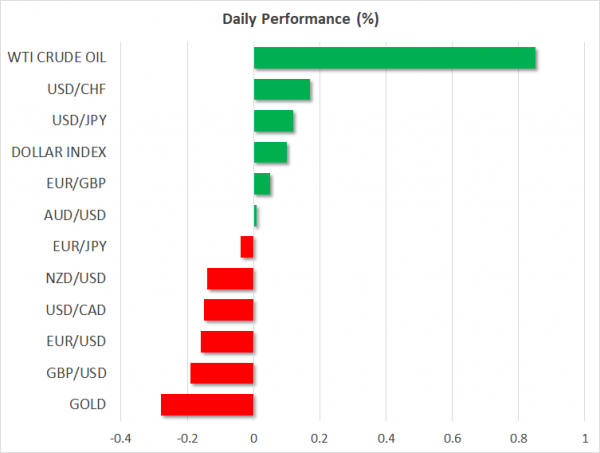 Friday will be relatively quiet in terms of data releases in the rest of the day, with the US being the only one to give clues on economic trends.

At 1400 GMT, the University of Michigan will deliver preliminary readings on consumer sentiment and inflation expectations for the month of October. Estimates on consumer sentiment are forecasting that the index might inch up to 100.4 compared to 100.1 in the previous month, while the survey related to inflation expectations will attract interest following disappointing but still strong US CPI numbers on Thursday. Earlier at 1230 GMT, US import and export prices for September will also give an indication on inflation. A weaker than expected rise in consumer prices drove the dollar lower against major currencies yesterday, with traders turning somewhat cautious about the Fed’s future rate hikes.

In energy markets, the US Baker Hughes oil rig count is due at 1700 GMT.

In terms of public appearances, Federal Reserve Bank of Chicago President Charles Evans (non-voting FOMC member in 2018) speaks on current economic conditions and monetary policy at 1330 GMT and Federal Reserve Bank of Atlanta President Raphael Bostic (voting member) participates in a discussion at 1545 GMT. Moreover, on the agenda is the Bank of England’s chief economist, Andy Haldane, who will be participating in an event at 1400 GMT.

In Bali, Indonesia, the International Monetary Fund and World Bank will start their annual meeting to discuss work on global financial and economic issues, with many influential central bankers attending the event, among them the ECB Mario Draghi who will be speaking on Saturday as well.

Traders will be watching US-Turkish political developments too, as the American pastor detained in Turkey with terrorism charges returns to court on Friday. Sources stated that a deal is likely on the table and the pastor could be released in the coming days. Note that his detention caused damage to US-Turkish relations, with the countries exchanging sanctions, and the Turkish lira plummeting in the aftermath. Any news proving speculation could boost the lira.

US:  The Non-Manufacturing Sector Expands Again in June

US ISM non-manufacturing rose to 57.1, back in expansion after 2 months of contraction