FOREX: The euro was slowly rising versus the US dollar (+0.15%) below 1.1500 on Thursday ahead of the European Central Bank (ECB) interest rate decision later in the day, where the Bank is expected to keep policy unchanged but is likely to give some growth hints. The pair pared some losses after sliding to a fresh 2-month low of 1.1377 on Wednesday. Earlier in the day, the German Ifo business climate index for October dropped to 102.8 from 103.7 in the previous month, while the Ifo measure which tracks business expectations for the next six months also clocked in lower than forecasts. Yet, the euro showed little weakness in the wake of the data. Pound/dollar advanced by 0.16% as the British Prime Minister seemed to have regained some support – at least for now – from Conservatives over her Brexit strategy, avoiding a leadership challenge on Wednesday. Meanwhile, the UK Brexit negotiator, Dominic Raab said that any extension of the transition period should be temporary, while reiterating that good progress has been achieved in negotiations. The US dollar index eased lower by 0.14%, while dollar/yen was flat. The antipodean currencies were mixed today. Aussie/dollar was up by 0.28% at 0.7075 and kiwi/dollar down by 0.15% at 0.6518. Meanwhile, selling interest in dollar/loonie continued (-0.27%) as the BoC raised rates as expected but appeared more hawkish. In emerging currencies, the offshore yuan inched to a 22-month low of 6.94 against the dollar.

STOCKS: European stocks were mostly in the green on Thursday despite the deep sell-off in US and Asian equities which suffered on the back of discouraging earnings results. At 1045 GMT the pan-European STOXX 600 was trading higher by 0.16%, while the blue-chip Euro STOXX 50 was losing an equivalent percentage. The German DAX 30 was up by 0.23% and the French CAC 40 surged by 1.13% led by technology and industrials after Moody’s altered Peugeot’s outlook to positive. The Spanish IBEX 35 climbed by 1.21% as non-consumer cyclicals surged. The British FTSE 100 increased slightly by 0.10%. In the US, stocks were ready to open in positive territory after the aggressive bearish moves on Wednesday.

COMMODITIES: In energy markets, WTI crude and Brent were near their opening prices with the former last seen at $66.78 per barrel and the latter at $76.24. Moreover, copper plunged by 0.96% while gold prices were moving sideways around $1233, marginally below the 3-month high of $1,239.68 reached on Tuesday. 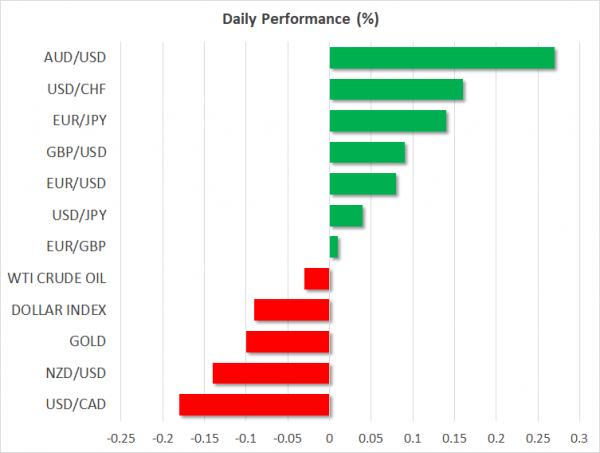 With risk-off sentiment growing among investors amid trade risks, Brexit and Italian budget uncertainties as well as the recent tumble in stock markets, the ECB is rather anticipated to appear cautious today when it concludes its two-day policy meeting at 1145 GMT. Policymakers are expected to reiterate that interest rates will remain unchanged until the end of the 2019 summer and the 2.5 trillion-euro quantitative easing program will stop in December. As this is nothing new to investors ears, the market interest will shift to the press conference following the rate announcement at 1230 GMT. Undoubtedly, the ECB chief Mario Draghi will face several questions about the Italian budget problem, with investors eagerly waiting to hear whether the ECB is planning to intervene by aiding the Italian government. While Italy will likely prove to be the biggest loser once the ECB pulls out of the bond market given Italy’s massive 130% debt-to GDP, Draghi is anticipated to say that assistance to individual governments is not ECB’s job. Other global risks such as the US trade protectionism and Brexit will probably be topics of discussion.

Should Draghi emphasize that rising political and economic uncertainties in the EU and abroad are a threat to the bloc’s growth, reassessing the balance of risks to the downside compared to the broadly balanced outlook he supported in the previous meeting, the euro could face headwinds. Alternatively, a more positive tone, messaging that growth weakness in the euro area will fade in subsequent months, could help the euro to rise higher.

Meanwhile in the US, durable goods orders will be closely watched ahead of Q3 GDP growth figures due on Friday. The data which are considered a good prediction of where GDP growth might be heading are expected to show that new orders for long-lasting manufacturing items have declined by 1.0% m/m in September after increasing by 4.4%, the fastest pace in more than a year. The downfall could be a matter of higher oil prices which probably weighed on transport purchases as the core measure which excludes transportation products is anticipated to rise by 0.5% m/m from 0.0% previously. Also, on the plus side are the nondefense capital orders which factor out aircraft items. Analysts estimate that measure to rebound from -0.9% to +0.5%.

In the event of an upward surprise in the above data, the dollar could come under renewed buying interest and vice versa. Later at 1400 GMT, pending home sales for the month of September could bring a fresh wave of volatility to the greenback given the downward pressure new home sales caused to Wall Street when the numbers appeared weaker than expected. Initial jobless claims for the week ending October 20 will be issued at 1230 GMT.

Elsewhere, Tokyo CPI stats for the month of October will gather attention at 2330 GMT.

In equities, earnings releases from Google’s parent Alphabet, Amazon and Intel – due after US markets close – could move stocks in subsequent sessions.

As for today’s public appearances, Fed Vice Chairman Richard Clarida will be speaking on “Outlook for the U.S. Economy and Monetary Policy” before a Peterson Institute for International Economics luncheon, in Washington at 1615 GMT. Cleveland Fed President Loretta Mester will be commenting on the same topic later at 2300 GMT before the Money Marketeers of New York University.

In Canada, trade ministers will hold a two-day meeting to discuss how to reform the World Trade Organization, while the Japanese Prime Minister will be flying to China today at the invitation of Chinese Premier Li Keqiang. 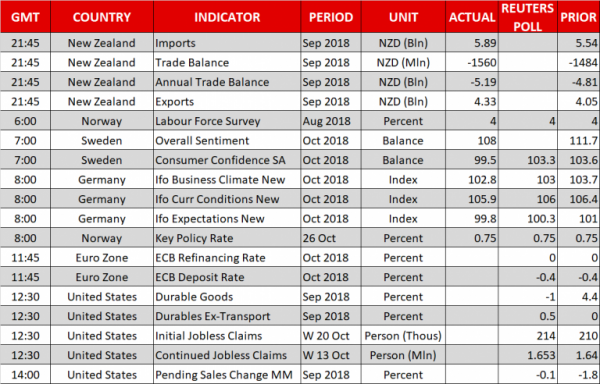