Cable dropped even lower yesterday, as Brexit fundamentals continued to keep the pound under pressure, despite a positive employment report for the UK. Reports that a leadership contest within the Tory party is in the works, increased uncertainty over the UK political scene, as PM May’s job could be on the line. Nobody actually knows if the necessary 48 letters to trigger the procedure of a leadership challenge within the Tory party have been send, but a party official, Graham Brady. Should the necessary number of letters reach him, he would have to inform the PM and then start the leadership contest procedure. British media seem to insist that the necessary number of letters has been sent and that the procedure could start as early as today. Having said that, should there be a leadership contest this week, Theresa May could find herself in a particularly weak position as she is scheduled to be in Brussels. On other news, Theresa May is on the European mainland, in order to see whether there is a possibility for any changes in the draft Brexit deal, however it seems to be the case that there is little ground for hope. We retain our view that the pound could remain under pressure as uncertainty dominates the UK political scene.

Cable as analysed yesterday, rose during the release of the UK employment data for October, however Brexit headlines pushed the pair’s prices down, breaking the 1.2555 (R1) support line (now turned to resistance). We maintain our bearish outlook for the pair’s direction and note once again that the RSI indicator in the 4 hour chart remains near the reading of 30, signalling a possibly overcrowded short position for the pound. Should the pair continue to be under the market‘s selling interest we could see it for breaking the 1.2485 (S1) support line and aim for the 1.2415 (S2) support barrier. Should on the other hand the pair’s direction be dictated by the bulls, we could see it breaking the 1.2555 (R1) resistance level and aim for higher grounds.

USD continues to strengthen as US treasury yields rise

The USD strengthened against a number of its counterparts yesterday, as the US bond yields rose. The 10 year treasury yield, inched up to 2.886%, yesterday continuing to distance itself from recent lows and supporting the USD. Analysts continue to view the risks tilted to the down side for the USD in 2019, as the Fed had managed to normalise its monetary policy over the year, but could prove unable to continue to ignore the turbulence at home and abroad. Also the weakening of the pound could have provided some support for the USD, as a number of traders shortened cable. On other news, US president Trump told Reuters that he would intervene in the Justice Department’s case against Huawei’s CFO, should it serve the national interest. We see the case for the USD to continue to be supported as long as the US treasury yields rise.

EUR/USD dropped yesterday, breaking the 1.1345 (R1) support level (now turned to resistance). Financial releases for the two currencies of the pair could be pointing out that some support could be in the works for EUR/USD, however should the market continue to favor the USD side, we could see it dropping even further. Technically we could say that for our bearish bias to be lifted we would require the pair to clearly the downward trendline incepted since Monday. Should the bears continue to reign over the pair’s direction we could see it breaking the 1.1305 (S1) support line and aim for the 1.1265 (S2) support barrier. Should on the other hand, the market favor the pair’s long positions, we could see it breaking the 1.1345 (R1) resistance line and aim for the 1.1385 (R2) resistance hurdle.

In today’s other economic highlights:

In today’s European session, we get Sweden’s CPI rate for November and Eurozone’s Industrial production growth rate for October. In the American session we get the CPI rates for November as well as the EIA weekly crude oil inventories figure. Also please note that the monthly OPEC market report is due out today. 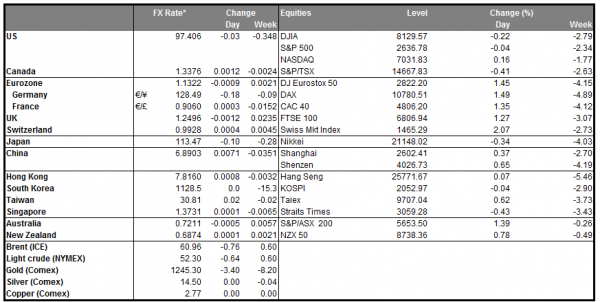