Thursday December 13: Five things the markets are talking about

Sterling (£1.2658) remains somewhat better bid after the U.K’s PM, Theresa May, survived an attempt to oust her (200 vs. 117). She is expected to travel to Brussels today to attempt to salvage a Brexit deal with her authority under question and her party bitterly divided.

The PM continues to face hardened opposition to her Brexit deal at home. It remains “nearly impossible” to predict the Brexit outcome, but most scenarios point to continued political infighting, sterling volatility and weak business investment resulting from the ongoing uncertainty.

Global trade tensions have eased a tad, as China reiterated its officials have been in close contact with U.S counterparts on negotiating details of a deal, and after resuming purchases of American soybeans.

The EUR (€1.1377) has found support after Italian PM Conte said he would propose a significant cut to the country’s budget deficit target for 2019 in a bid to avoid sanctions from Brussels for breaching E.U rules. Italy will now aim for a deficit of +2.04% of GDP, down from +2.4%, the level, which it had previously earmarked for 2019.

The ‘big’ dollar has steadied against G10 currency pairs, while sovereign bond prices have drifted higher after overnight losses and crude prices remain under pressure on renewed fears of a global glut.

On tap: The ECB is expected to end asset purchases at its final policy meeting of this year this morning (07:45 am EDT). Elsewhere, China industrial production and retail sales data for November is due tomorrow.

In Japan, equities touched a one-week high overnight with sentiment lifted by signs of reduced Sino-U.S trade tensions, and technology firms got a boost from a rally for U.S peers. The benchmark Nikkei share average ended the session up +0.99%, while the broader Topix rallied +0.62%.

Down-under, Aussie shares closed slightly higher, supported by gains in miners as market sentiment improved after China took steps to ease trade tensions with the U.S. The S&P/ASX 200 index ended the session up +0.1%, the third consecutive day of gains. In S. Korea, the Kospi was up +0.62%.

In China, stocks rallied overnight as expectations of further policy measures to aid the economy led to gains across the board. The blue-chip CSI300 index ended up +1.6%, while the Shanghai Composite Index rallied +1.2%.

In Hong Kong, equities finished higher on Thursday as signs of easing Sino-U.S trade tensions and on expectations of stronger policy support for China’s cooling economy. At the close of trade, the Hang Seng index was up +1.3%, while the China Enterprises Index also gained +1.3%. 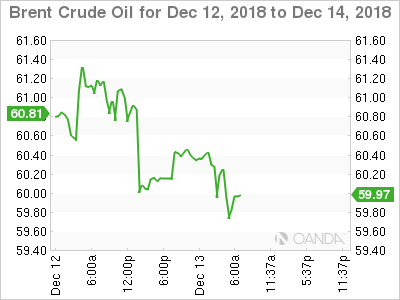 Oil prices have steadied overnight, under pressure from high inventories, but supported by a drawdown in U.S crude inventories and on signs that the Sino-U.S trade war may be easing.

Global supply of the ‘black stuff’ has outstripped demand over the last two quarters, inflating inventories and pushing crude prices to its lowest level in 12-months at the end of November.

Note: OPEC and other big producers, including Russia, agreed last week to reduce supply to try to trim the surplus.

A drop in U.S. crude inventories this week is also supporting prices. EIA data yesterday showed that U.S crude inventories fell by -1.2M barrels in the week to Dec. 7, compared with expectations for a decrease of -3M barrels.

An EIA statement said that “the oil market should gradually rebalance and move into a supply deficit by Q2, 2019, if OPEC and the other large producers stick to their deal last week to reduce output.”

OPEC said yesterday that demand for its crude in 2019 would fall to +31.44M bpd, -100K bpd less than predicted last month and +1.53M bpd less than it currently produces. 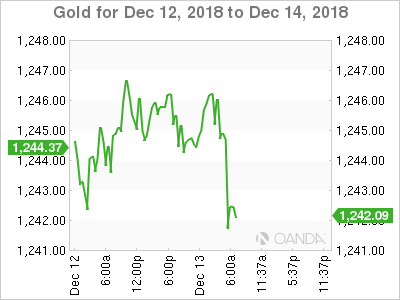 No surprises from the Swiss National Bank (SNB) this morning as it kept its deposit rate at -0.75% and continued to say the CHF ($1.1285) was “highly valued” while repeating its longstanding willingness to intervene in currency markets if needed. The market expects the SNB to stay on hold well into next-year. In its policy statement there was a reduction in its 2019 inflation forecast to +0.5% from +0.8% and a cut to its 2020 forecast to +1% from +1.2%. The bank cited lower oil prices and a more moderate economic growth outlook.

Later this morning, the European Central Bank’s (ECB) last meeting of the year should confirm that its +€2.7T asset purchase programme (APP) will be terminated at the end of the month. Recent, disappointingly soft, economic data may not have been overly supportive of such a move, but there seems to be a clear consensus that there is no longer the need to provide additional monetary stimulus every month. Expect ECB President Draghi to emphasise that the central bank’s stance will remain very accommodative and also flexible in respect to the incoming economic data.

In Norway, Norges central bank kept rates steady at +0.75%, as expected, and the decision was unanimous. They reiterated that the outlook and balance of risks imply a gradual interest rate increase in the years ahead. They see the next rate increase as most likely in Mar 2019 as underlying inflation is close to the inflation target of +2%. The fall in oil prices suggests that wage growth may also be lower than projected in the period ahead.

In Turkey, Central Bank of the Republic of Turkey (CBRT) leaves the one-week repo rate at +24%, as expected. They reiterated that could deliver additional tightening if needed and that factors affecting inflation will be closely monitored. 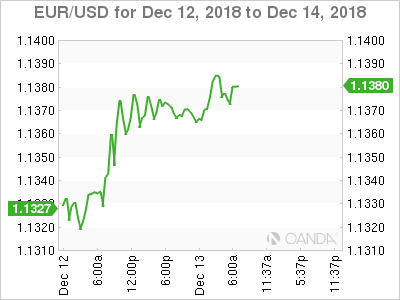 PM May has survived a confidence vote, but this does not yet mean her Brexit deal will get through parliament – sterling still faces the prospect of a ‘no deal’ Brexit taking place in March 2019. GBP (£1.2655) has extended its rally, +0.3% ahead of the NY open. In the U.K, bookies are quoting at 6/1 that the EUR/GBP exchange rate trades at €1.0 by the time January is upon us, this is down from odds of 9/1 earlier in the week.

EUR/USD is little changed at €1.1375 ahead of the ECB rate decision. Draghi is expected to announce that QE is to end this year, and reaffirm his intent to hike rates after next summer. The market will also be focusing on the new staff forecasts. With the ECB likely to recognize the ongoing slowdown in Q4, we could see some very minor tweaks to the growth and inflation forecasts. 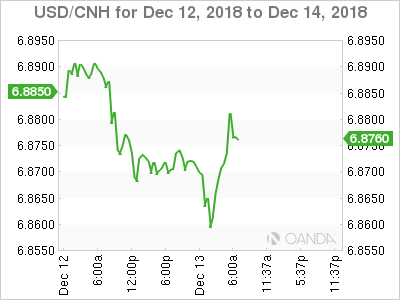 Data overnight showed that China’s foreign direct investment (FDI) into China fell -1.3% in the first 11-months of the year to ¥793.27B from a year earlier.

In November, FDI into China dropped -26.3% y/y to ¥92.11B and in the January-November period, foreign direct investment into China from the U.S increased +3.7% from a year earlier. 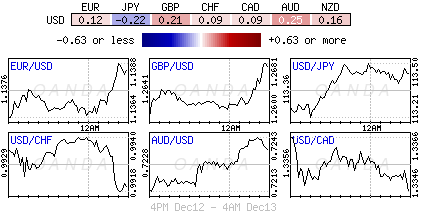